A little bit of everything

……………………………….
Have you ever had that feeling where you have so much going through your head at once that you can’t get anything out. It’s like you have 500000×10500000 things to say but your mouth and brain are like, “Sorry homie, we are only going to let one thing out at a time.” I think the most efficient way to solve this problem would be to simply create a device that would allow you to think these 500000×10500000 and to simply transfer them directly into other people’s heads (pay close attention to my use of the word simply). Of course that doesn’t exist (but hey, I don’t see why you guys can’t invent it); however, until then you will just have to settle with this video that I made with the help of another class of 2019 (Thank You Nina Lutz for multiple hours in editing, to my family for being awesome in the videos, to my best friends Diann Huynh and Chielo Mbaezue for participating, and then of course everyone at MIT for appearing)!!!

If you would like to hear me talk about getting to MIT and my last days at home then start at the beginning; however, if you would rather just see everything that went on once I finally got to MIT start at around 5:40!!!

To be honest, I could try to write about everything that has happened in this last week or so since I have arrived at MIT, but that would most likely result in the crashing of the internet and the explosion of my computer. I will probably do a few later posts about the details of things like moving in, the crazy weather, fire alarms, and whatnot in the future, but this post will just be a hodgepodge of my initial thoughts and feelings of moving into MIT!!! 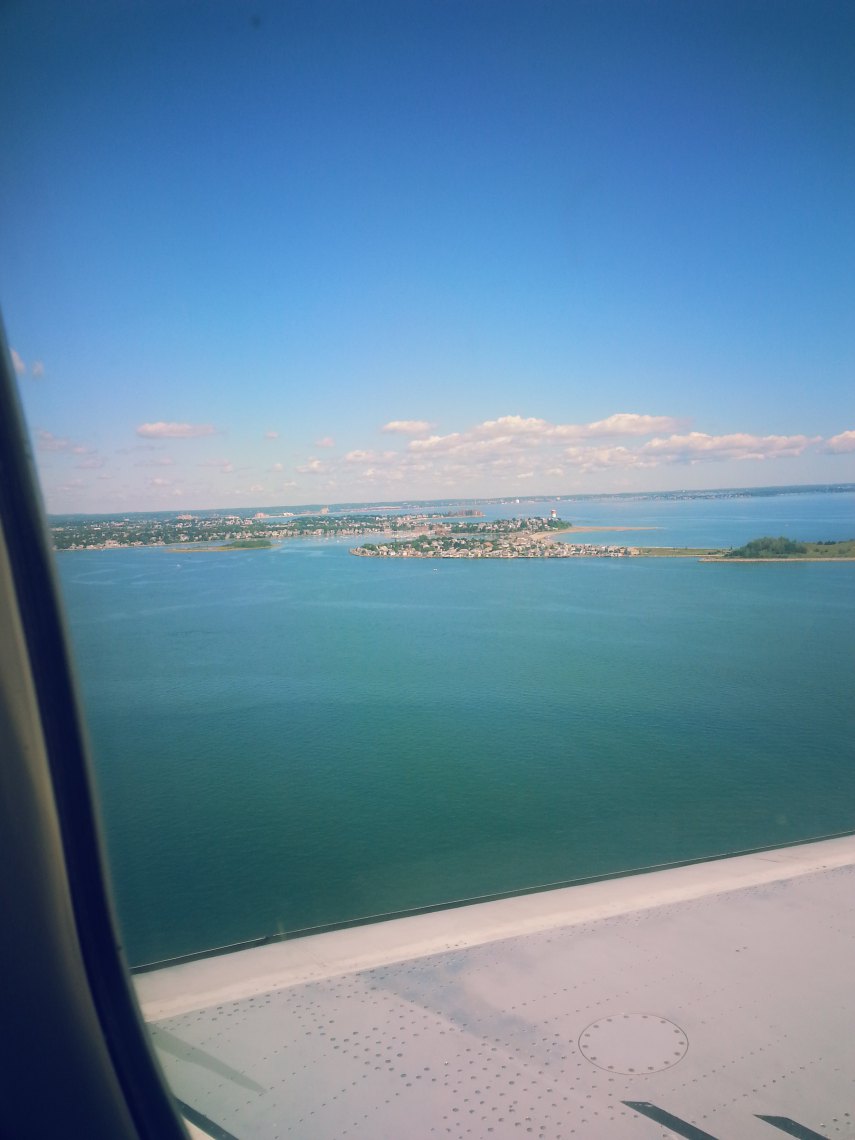 I am not going to lie it wasn’t until the plane started landing that I realized I was going to be leaving home to start a new life as a student.

First things first would be the people here. Above the parasailing, the F1 racing, the beautiful walks across the river, etc. etc. etc. I have fallen in love with the people here (platonically of course…… at least for the most part (awkward lol)). The thing about MIT is they know exactly what they are doing when they pick out every respective student. MIT picks people like-minded enough to not hate each other, but different enough that every conversation with anyone leads to learning something new. I actually cannot remember how many times over these last few weeks I have found myself up at 2am sitting at some random table with seven people I didn’t know only hours before talking about the world and how we would love to see it change.h

This aspect of MIT truly meant the world to me. I have always been one of those guys that loved to question the world around me; however, in day to day life it is often hard to find other people that will listen let alone participate in a conversation about some random curiosity. However, at MIT you can more or less assume everyone you meet is more than ready to hop right into a conversation about anything from computers on wheels to gun control. Anyone/everyone is ready to both teach and learn about nothing/anything/everything, and I have to say I love that.

Of course a post about my initial thoughts at MIT would be nothing without my input on what it is like to start classes here….. So I shall do that……… ummm…… (Suspense must be killing you)…….. Now! 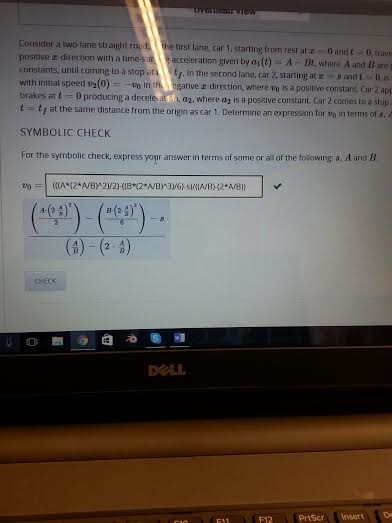 Well to start off I would like to say that I had always heard that MIT was hard, and I of course I had been mentally preparing myself for that; nevertheless, I don’t think I was 100% ready for what was coming up.

My initial response to the first day of class could only be tied to that feeling you get when you reach into your pocket and realize that your phone isn’t there. Your heart starts to beat fast, you start looking around frantically for some sign that might bring you even the smallest sense of relief, and then you immediately start running through your memory in order to satisfy the question: “How did I get here?”

For the most part high school begins with a nice day of syllabus, followed by a few days or so of review, and then a nice simple subject that will ease you into the year. MIT on the other hand does not offer you the same luxury. MIT would much rather skip over the awkward metaphorical small talk that we have become so accustomed to, and go straight to the deep metaphorical big talk that we might reach at some time later in the metaphorical conversation going on here. 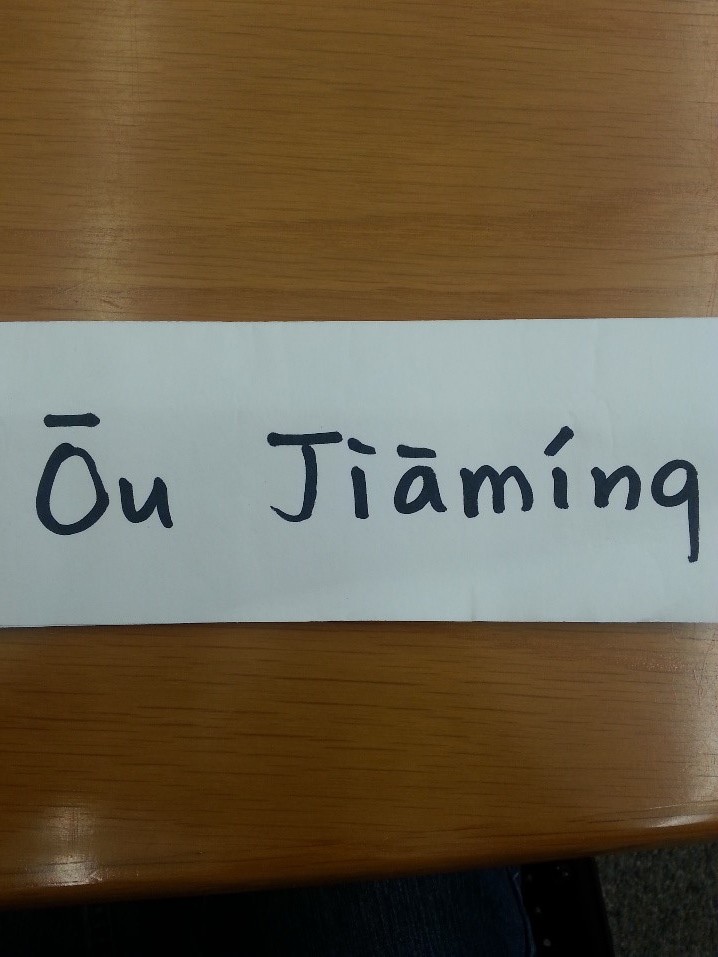 My Chinese name for Chinese I. You can call me Ou Jiaming ;)

I think the best example of this would be my first few days in my Chinese I class. I walk into a lecture room of about 10-12 students and the professor says to all of us ‘never spoken Chinese in our lives but hoping to come here and learn some Chinese, but not really sure what we are in for’ students and proceeds to tell us that this first class is the only class we will speak English in. Ever since, I have not heard a word of English in that class from the students or the professor.

Initially this idea terrified me. I had never spoken a word of Chinese and now for an hour a day it was my only language. Nevertheless, I very soon came to love the idea. I was learning more Chinese in my first week than I had learned of Spanish in three years. Not only that, but I was beginning to hold up small conversation and quickly able to understand and respond to the professor in Chinese, something I often had trouble doing in Spanish.

This idea of complete immediate emersion is not only present in Chinese, but any class at MIT. Instead of keeping us in our comfort zone, professors throw you into the deep end. Though it might be terrifying at first, the rate at which you begin to learn and understand the subject seems to increase exponentially. In just a week or so of classes I feel I have come to understand more about physics, biology, and calculus than I had learned over a semester in high school. To some that might be terrifying, and in all honesty it made me nervous as well; however, the fact that you come to realize is that you are not alone in this journey. Every other student around you is being plunged into the deep end of this pool with you. You are not trying to learn swimming all by yourself, it’s a group effort that encompasses every student that has decided to attend MIT. (Random note, you do actually have to learn to swim- fantastic blog post on that here.)

After only a week at MIT I have already come to fall in love with every part of the school. Of course this post cannot cover every aspect of my first week here, things like dance troop, fraternity Rush events (official brother of Phi Kappa Theta woot woot!!!), adventures into Boston, FYRE events, etc. etc. (I pronounce this word eh-tuh-kuh not et cetera, it’s just what I do, don’t worry about it), but that is what these blogs are for! Over my next four years I hope to give all of you guys insight into all of these events. So stay tuned, never know what might pop up :P !!!!!!!!!!!