Will you forgive the pun if I tell you that I just declared my major?

I DECLARED MY MAJOR!

I can’t believe it. After all the deliberation, all the conversations and requests for advice and frustration and questions and identity crises…

Every student at MIT is required to declare a major by the end of their freshman year. If you’re really, really unsure, you can declare “undeclared”, but most people do make at least a temporary decision, for a couple of reasons:

1. More resources. You’re assigned a faculty advisor in the department you’re interested in, and receive information about events and research opportunities.
2. You are not bound to your decision. To change your mind (by the end of sophomore year), all you need to do is fill out a form and get it signed.

Basically, there are no disadvantages (at least, none that I can think of) to declaring your major at the end of the year. My impression is that joining a particular department is the best way to figure out whether you really fit there; you may find that you love it, or that you hate it. Either way, great! Now you know. The only binding factor is, obviously, the whole would-like-to-graduate-in-four-years thing: if you took zero aero/astro classes until your junior year, and then switched into Course 16 (Aeronautics and Astronautics), you’d probably be in for a rough time.

It’s worth mentioning that the major I wrote down on my MIT application is NOT the major I ended up declaring. And, on that note, I should probably explain how I chose mine.

How Anna Chose Her Major

Once upon a time, in a land far, far away (approximately 3270.65 miles* from MIT), there is a cupboard in a middle school science classroom that contains a book called The Fabric of the Cosmos, by Brian Greene. I read it in eighth grade, and decided that I was, without a doubt, going to become a physicist (after I accepted that it was not possible to become Brian Greene himself). I’ve always been a stargazer; on planes, when they turn the cabin lights off at night, I can be found standing by the bathrooms with my face pressed against the window (those windows are REALLY cold, in case you were wondering). One of the many reasons why I trip so often when I walk outside is because my eyes tend to be oriented upward, instead of straight ahead. When I saw the Milky Way for the first time a couple of summers ago, I burst into tears and bawled that it was “SO BEAUTIFUL”, which freaked out all my new camp friends.

About halfway through high school, I began to feel uncomfortable with physics. There was something impersonal about it: something grey, and mechanical, and overly-mathematical, and the idea of spending all my time in a lab or an office made me uneasy.

The summer before my junior year, my mom bought me The Man Who Mistook His Wife For A Hat, a collection of case studies written by neurologist Oliver Sacks. For those of you who haven’t read any of his books, let me briefly explain why Oliver Sacks immediately became my hero, by quoting him directly:

“…we are over-developed in mechanical competence, but lacking in biological intelligence, intuition, awareness…and it is this, above all, that we need to regain, not only in medicine, but in all science.” (from Awakenings)

Rock on, Oliver Sacks. He has this amazing way of making science personal, and of reminding us to be wary of reducing patients to lists of symptoms: that it is necessary to use a combination of the objective and the subjective. This struck particularly close to home for me. I imagined myself performing research about people, using my experimental results to help people and change the world. Also, let’s be honest: the brain is really cool. You and I carry one around in our heads, and yet know next to nothing about it.

The summer before my senior year, a lecturer at the camp I went to (shout-out to the Summer Science Program) discussed why he majored in physics, and then went on to medical school and never looked back. “There is no human face to the science of physics,” he said. “There is a human face to medicine.”

Eek. I think it was at that lecture that I officially changed my mind, to the grief of the eighth grader physicist within me: I was going to become a neurologist.

I got to MIT, and told my new friends and dorm-mates that I planned to declare Course 9 (Brain and Cognitive Science). A few months into my first semester, I began UROPing in Saxelab, which performs research in an area called Theory of Mind. My group is studying how people view complex social scenes: we’re going to monitor the eye movements of 1) a group of normal subjects, 2) a group of normal subjects with localized regions of their brain disrupted, and 3) a group of subjects with ASD (Autism Spectrum Disorder). All super cool, and nothing to dissuade me from picking Brain and Cog Sci as my major.

The moment I arrived on campus, however, my plan fell apart. The fact is: there are a lot of really cool things you can study here. I had no idea what a major in Comparative Media Studies would entail, or what the distinctions were between all the different engineering departments. I was overwhelmed from meeting so many different people: from hearing “COURSE [NUMBER] IS THE BEST! YOU SHOULD MAJOR IN IT!”, where [NUMBER] has represented literally every department.

This began happening a lot… 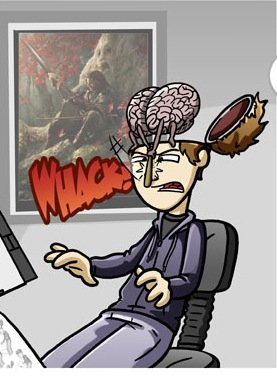 Extra credit to the first person who can tell me where this is from.
…as suddenly, I felt like I could major in anything. Civil and Environmental Engineering? Sure. Aerospace Engineering? Heck yeah. Biology? Okay. Chemistry? Yeah! Math? Maybe. Electrical Engineering and Computer Science? Why not?

When I have trouble making a decision*, my instinct is to try everything first. Okay when it comes to picking a breakfast cereal, but not so much when it comes to picking your major. There are thirty four departments and programs at MIT (though not all of them are available as majors for underclassmen), and a grand total of two semesters before it’s time to declare.

*Every time I have to make a decision.

Panic. Identity crisis. How was I expected to make a decision without exploring all of the options? How could I feel comfortable crossing, say, Political Science off the list, unless I took a class in it and decided that it wasn’t for me? What WAS “Urban Studies and Planning”, anyway? Also, my astronomer/physicist self had never really stopped haunting me, and it didn’t help that I LOVED all of my physics classes. It was back to square one.

First one: doing things. It’s what it sounds like. What sounds awesome in theory might not necessarily be a good fit in practice. Something I’ve had to come to terms with recently is that there’s a difference between finding a subject interesting, and actually wanting to do it; research, for example, does not entail making a grand discovery every day and saving a nation per experiment. It involves a lot of failure, and frustration. You have to love what you’re doing, and it seems to me that the only way to figure out whether you love doing something is to do it. This can mean working in a lab, joining a club, or just tinkering in your bedroom (the first two, for me).

Next: talking to people, which is equally valuable – and necessary, when it’s impossible to “do” everything (trust me: this comes from someone who has tried). For every interest of mine, I’ve had no trouble finding someone (faculty, upperclassman, alum) who’s done it for ages, loves doing it, and is super pumped to tell me all about it. Even if you don’t find exactly who you’re looking for, discussing your interests with others helps to get your thoughts and priorities in order.

In sum: there’s no excuse for not talking to people, and it can even (drumroll) lead to what you decide to major in.

Here’s what happened. I went to a Physics faculty dinner a few weeks ago, and pulled up a chair next to the Associate Head of the department, Krishna Rajagopal. I babbled about my major choice dilemma: about how I wanted to help people, particularly by addressing issues in cognitive science, but that I loved physics, and always had. I was a big fan of the physicist problem-solving approach.

Professor Rajagopal: “Have you considered Biophysics?”
Me [super embarrassed, and wishing Google was readily accessible]: “…I don’t know what that is.”

He gave me the names of some professors that I should talk to, and was super quick to get back to me when I followed up via e-mail later that evening; he responded within an hour, which made him my favorite person in the world.

I e-mailed the first name on his list: Jeff Gore, who started a biophysics lab at MIT last year. He responded within fifteen minutes, which made him my new favorite person in the world, and we set up a meeting for the following afternoon.

The next day, I showed up at his office, and we talked for half an hour about my interests, about his research, about biophysics, and about how I could begin exploring it. It seemed that it was in fact possible to pursue a joint study of physics and cognitive science.

Behold: the physics flexible option (Course 8b), in all its awesome power. It allows people like me – who don’t necessarily plan on going to graduate school in physics – to gain a solid backbone in physics, and take lots of awesome physics classes, while still being able to branch off into other fields, and apply the problem-solving approach elsewhere.

In the website’s words:

“This option is designed for students who wish to develop a strong background in the fundamentals of physics and then build on this foundation as they prepare for career paths that may not involve a graduate degree in physics. In the past, many students have found an understanding of the basic concepts of physics and an appreciation of the physicist’s approach to problem solving an excellent preparation for careers in business, law, medicine, or engineering. This option should be even more attractive today in light of the growing spectrum of nontraditional, technology-related career opportunities.”

Yes, please. Count me in.

Professor Gore then gave me a list of names, which included Sebastian Seung: a member of both the Physics and Brain and Cognitive Science faculty (in other words: my hero before I ever met him). Actually, I met him the next day, by total coincidence: he introduced the speaker at a talk I attended. After the lecture, I walked up (and by “walked up” I mean “cornered him”, poor man) and explained my interests. He introduced me to another professor as a “young lady interested in both physics and neuroscience!”

Um, sure. Dangerous. That’s me.

At the end of our chat, I told Professor Seung that I was going to declare my major soon, and he told me to make him my advisor.

Funny how things work out.

Anyway, on Tuesday, I had a meeting with my current advisor (every freshman has one), and checked the box next to “Course 8” (Physics) on a piece of paper. At 4pm, I dropped it off at Student Services…and that was that. I am an official physics major at MIT.