A sporting chance by Matt McGann '00

Despite growing up in New York, I became a Red Sox fan when I was 8 or 9 years old and have been ever since. After the Red Sox’ big comeback against the Yankees, my mom scanned in an old “baseball card” of myself in a Red Sox uniform taken sometime in the late 1980s: 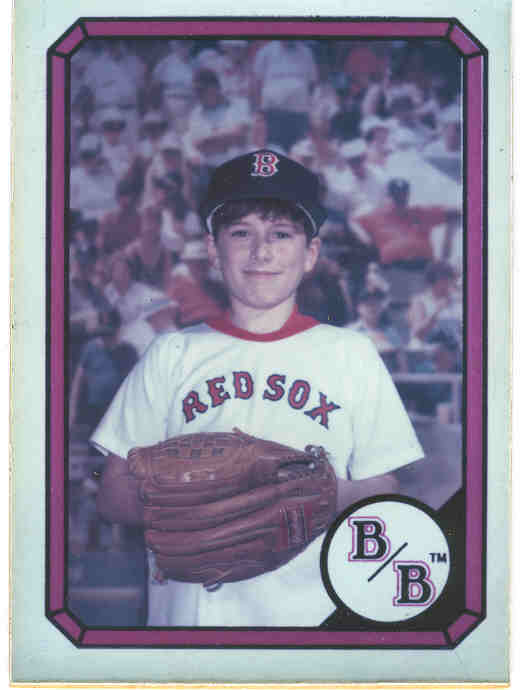 While growing up I always enjoyed sports, especially baseball and hockey, I didn’t really want to go to a “jock school,” the kind of school where you had to turn out for the big football game and get drunk beforehand, or where athletes were held to a lesser standard than everyone else. This was something in MIT’s favor: even though we have 41 varsity sports, and ~20% of students participate in them, you knew that every athlete on campus was just as smart as you were.

My friends at MIT who were varsity athletes really enjoyed the ability to participate in sports without it taking over their lives. They were quite happy with the dedication of the coaches (many of whom I’ve met, and are super nice people). And MIT’s athletic facilities, actually, are very, very spiffy.

The quality athletics program was a draw for me in the depth of intramural sports. I had been a varsity athlete in high school (cross country and wrestling), but I had decided not to participate in college. But I still wanted to be active, and my dorm, Baker House, like most of the dorms and halls on campus, was very involved with the IMs. Baker fielded teams in the A league (varsity-level), B and C leagues (intermediate), and D league (complete beginner) levels. I played a bit of tennis, ultimate frisbee, softball, table tennis, unihoc… The sign-up sheets for the teams would be in the lobby of the dorm, and any student could get onto the Baker teams. So that’s just what I did. And whenever we had an IM game, it would be announced to the entire dorm, so random people could join the team just for the one game, or so that people could come and watch (we’d always have at least a small crowd).

My favorite IM sport was ice hockey. I played a lot of roller hockey in high school, but the nearest ice rinks were far away, and the ponds were only frozen for a couple months of the year. So I grabbed the opportunity at MIT to really get into it. We had our own Baker House jerseys and everything (they were really awesome!). IM hockey was one of my absolute favorite things at MIT.

After graduation, it turns out that the MIT Alumni Club of Boston also fields an IM Hockey team. So I have participated on that team (actually, one of three teams) since graduation, and it has been a great way to network and meet fellow MIT alums from the past thirty or so years (and the alumni team also has snazzy jerseys). Today we got an email announcing the start of the season:

Supposedly, the hockey schedule will be ready tonight. Our first game
could be as early as Sunday, so please check your email tomorrow…

I promise to talk more about IM Hockey as our season progresses.

For those of you who are reading this and are interested in playing varsity sports at MIT: you should definitely contact our coaches. Having athletics talent is like having any other talent — violin, art, juggling — and we’d love to know about it.

Not the same few colleges: Bryn Mawr College outside of Philadelphia, PA. Sorry, gents, this one is just for the ladies. It’s a place with strong traditions and even stronger academics.