An Ode From A Science Fair Junkie by Afeefah K. '21

There’s this idea that every moment in your life, every experience you go through adds to your being in some way or form. You essentially become a mosaic of all that life gives you. Your high points lay the foundation for the confidence you carry. And your low points remind you to take every step forward with humility. And while all of those moments and experiences deserve equal recognition in who we become, some just color you more than others. If there is any such life experience that’s had a lasting impact on me, it’s science fair.

This weekend, approximately 1800 high school students from across the world will be competing at the Intel International Science and Engineering Fair. 1800 kids with deep passions and big dreams. 1800 kids walking around downtown Pittsburgh, display boards and models in hand. I’m walking around today too. In Cambridge. With a backpack full of finals studying to do. I’ve been one of those 1800 kids for the past three years of my life. And in the blink of an eye, I’ve gone from within to without (simultaneously enchanted and repelled by the inexhaustible variety of life). 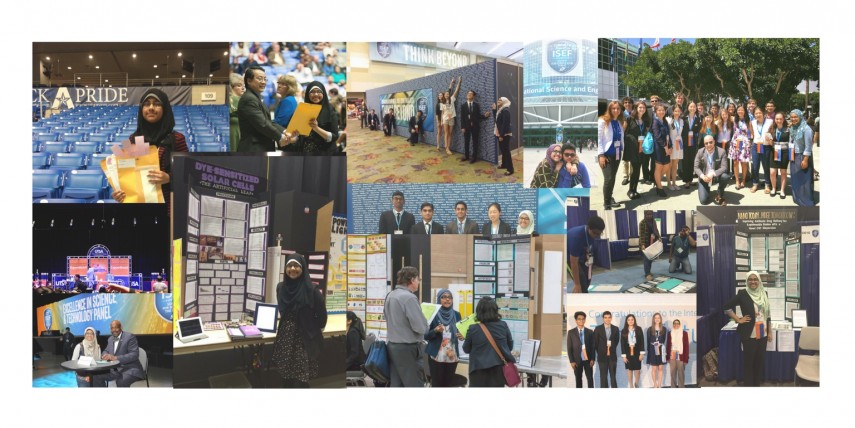 I honestly can’t trace back to the specific moment that I fell in love with science fair. It sometimes feels like science fair was just always there. The way cyberchase was. I grew up with it. I grew up asking questions. I grew up with the living room being a place for my “experiments.” I grew up gluing paper to trifold boards. What started off as a mandatory elementary school assignment quickly become something I really r e a l l y REALLY enjoyed doing.

My very first science experiment was a naive effort to demonstrate the importance of proper sneezing etiquette. As an energetic kindergartener, I filled balloons with confetti to represent a nose filled with snot. I would then pop the balloon both inside and outside of a box to compare how far the confetti traveled in both scenarios. As you can probably guess, I discovered pretty soon that covering your nose when sneezing was super important.

Since then, a few things have changed. My fashion sense significantly improved. I finally grew to be taller than my display boards. And I did science fair out of personal joy rather than school mandates. The questions I asked become more specific and relevant. By senior year of high school, I was looking into improving the efficacy of existing antibiotics with carbon nanotubes.

And while the science I did was definitely super cool, I don’t look back at my science fair years because of the work I did. Not at all. Rather, I look back at those years because of the people I crossed paths with and the opportunities I was blessed to experience. I miss the pre-judging anxiety of early science fair mornings. I miss casually memorable conversations with my booth buddies. I miss being absolutely terrified by the surprisingly friendly judges. I miss late, stressful nights with my OG supporter, my father. I miss the early morning good lucks from my mother and brother. I miss the many friends I’ve made throughout the years. I miss all of the mentors that have motivated me through the end. I miss it all.

I was one of THOSE kids. Attending Intel ISEF was on my bucket list. The summer after 8th grade, I came across a highlights video for the 2014 Fair held in Los Angeles. And I was immediately hooked. All of the finalists were bursting with a sense of joy and excitement. And it was contagious. For an athletically ungifted girl with dreams of attending the Olympics, ISEF was just what she needed. She felt deep down in her heart, that ISEF would change her life. So on the brinks of entering high school, she had a new bullseye in mind.

I want you to imagine then, an overzealous freshman, geared with her striped blazer and elevated flats, walking into her fourth science fair expecting to walk out with a golden ticket to internationals. Disappointment was the inevitable. Forget about qualifying for ISEF, I didn’t even place. I sobbed like a baby that night. Like a baby. What had gone wrong, I wondered. Did I not put in enough effort? Did I not run enough trials? Did my dye-sensitized solar cells lack potential? Did I not know enough background knowledge? Did I completely screw up my judging? Was I not good enough? WHAT HAD GONE WRONG? The disappointment chewed on my insides.

No longer having to prepare for the next level of science fair, I spent the rest of that year reevaluating myself. I eventually came to a new understanding of expectations: that they are nonlinear. Just because an expectation isn’t met, doesn’t mean it is no longer achievable. It simply isn’t achievable in that way at that time. Irrational expectations lead to dead ends, but a healthy expectation offers a detour. I wasn’t aiming just for the bullseye anymore, but for all that the entire target offered. ISEF would happen if it was meant to be, and by all means I continued working even harder for it. But I let go off all of the pressure I pumped into that dream. I continued my research because I enjoyed it, and I shared it with those around me at any opportunity that came my way. Science Fair lived on in my life.

Finding a New Sense of Confidence

About a year later, I was on my flight to Pittsburgh, Pennsylvania!!! My bucket list was going to become one wish shorter.

Dear Science Fair, Thanks for Making Me Who I Am

Today, I am two weeks away from finishing my first year at MIT. I plan to major in bioengineering. I currently UROP in the Langer Lab at the Koch Institute for Integrative Cancer Research where I continue to work with microorganisms. Too often, people think that going to ISEF is necessary to get into schools like MIT. And while I can’t really speak to that, I want to make it very clear that this isn’t about that. Rather, it’s about how science fair as a whole made me a better version of myself.

I truly believe that everyone is born into this world with a potential that is unique to them. Often times, all it requires is a little spark to make them realize what all they are capable of. For me, that spark was ISEF. If science fair wasn’t in my life, maybe something else would have started that spark. But in the life that I have lived, science fair is what pulled me out of my small suburb in Texas. It helped me make sense of the world I want to be a part of. It made me realize that innovation and discovery is useless if it can’t be brought to people. It made me realize that I was passionate about helping other people find their sparks as well. Because if you’re brave enough to explore what you’re capable of, you’ll be able to most optimally serve your purpose in this world. So I guess I have a lot to thank science fair for. For sweet nostalgia. For life lessons. For the confidence I hold in myself. For the dreams I cherish. And on top of all of that, for making me who I am.

With that, I want to wish all of my science fair junkies in Pittsburgh good luck this week! The next few days might just change your life, so live them to the fullest!