Ahhhh. Wednesday. Veteran’s Day. A day FREE of classes. A one-day weekend! Wooohooo!!! Yesterday, I decided that today would be perfect for a movie/drama/DDR marathon!

So I found my friends Tuesday and asked, “Have any plans for tomorrow?”

“Tomorrow’s my chance to STUDY!”
“I have some major catching up to do!”
“AHHHHH evil physics test on Thursday!”
“I am locking myself in my room and never coming out!”

Somehow I found about three people that said they could do SOMETHING today. So I made a nice schedule:

I would wake up at 9:30ish, watch the fourth episode of My Girl (one of the best asian dramas out there, w00t!) with my big Jessica (a girl from my sorority) at 10, get to the Terrascope room at 12 and stay there until 2 or 3 to work on our final plan for lowering carbon levels in the atmosphere with carbon sequestration and by lowering countries’ CO2 emissions levels, go to the physics review session from 3-5 for my own physics test on Thursday, and then find my friends to watch the Prestige and DDR. And then call it a night.

So what REALLY happened:

I ended up watching 2.5 episodes of My Girl with my friends until 1ish, then stayed up until 3:30 AM studying for physics. Luckily I texted my friend and told her I might not be able to watch the drama at 10.

So I woke up at 10 AM, turned off the alarm, woke up at 12:30, went to the bathroom and saw my left eye glaring at me in all its bloodshot glory.

I am pretty sure that I don’t have pink eye because I’ve had a red eye a million times before for allergies or from overuse (ahem… maybe staying up till 3:30 like EVERY NIGHT), but there’s always a first time, so I’m heading over to medical after I finish this post. And maybe after I study a bit more for physics. Because I didn’t feel comfortable going into the Terrascope room or to the physics review session – there would be 30-80 people there that could get “infected” or scared at least…

So now it’s 3:30 and I’m trying to get down and finish this annoying mass transfer problem and then go on to the rest of physics. No DDR or movies I suppose…

But I found something SOOO much cooler that I can do while I work in my room! XD It’s called – OWL CITY!!! I have Fireflies and Saltwater Room on repeat right now… XD

So, if you’d read my last post, you may be asking: What’s your life been like since that nearly-failed 18.022 test?

We had ANOTHER test, but this time I scored right on average (70)! And last time I checked (two days ago by email), I was passing the class with a B-! And since freshman year is pass/no record, I was in paradise. Some of my friends are still struggling though and didn’t crack that test =( Hopefully we’ll all make it through!

In other school news, I’ve been getting more involved in Terrascope. We’re supposed to work like 6 hours outside of class a week… so since the deadline for our project is coming up soon, from now on I’m spending an extra 6+ hours a week on Terrascope =P

I also have to plan what I’m doing during IAP and the summer. I would LOOOVE to do something with Outward Bound or another group, hiking/mountaineering somewhere… but everything I’ve found is too expensive so far… so I’m going to look for a class/UROP/internship for IAP and an internship/program for the summer. Some people already have applied to internships and programs… I’m one of those students who doesn’t work efficiently and… therefore…hasn’t… X____X

Also, I’ve been trying to balance my life more outside of classes. For starters, I joined a sorority (*gasp!*) and we just had initiation yesterday (*DOUBLE GASP!*). We also had relevations – this is where we get paired to our “big” as in “big sister” (sophomore or junior from the sorority) whom we bond with for the 2-3 years we have together at MIT, and beyond! So yeah, my “big” Jessica and I have been watching Asian dramas! =) Yay bonding XD

I’ve been trying to spend more time with friends, not just in the sorority (I really should go to more of their events). I went to Salem for Halloween with friends from MIT and one high school friend that goes to Brandeis. There were so many costumes! And we went to an Italian place which had wonderful pumpkin ice cream. Unfortunately I don’t have pictures from there, but I did get one of this evil flower my friend found in some hidden lair… 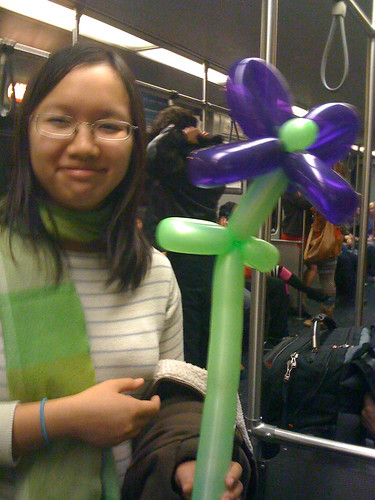 Look! Witness the evil! (My friend almost flew to the other side of that train while holding that flower. I am serious.)

I also have a good friend in McCormick whom I work with on 18.022 when we don’t get distracted by watching movies, playing with Photobooth, or doing weird things to hair (like mine…) 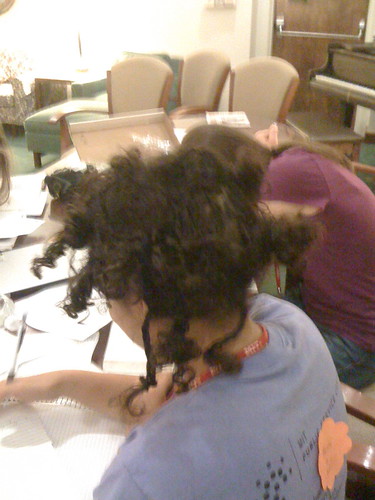 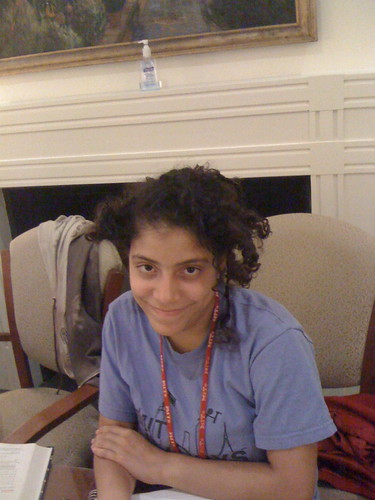 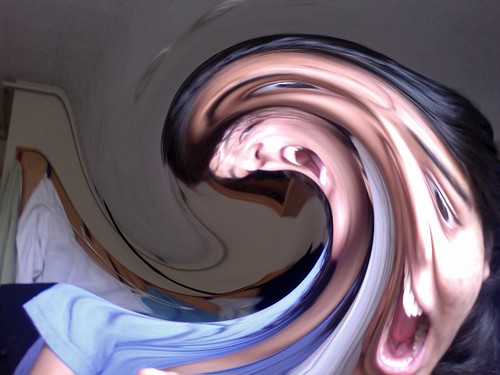 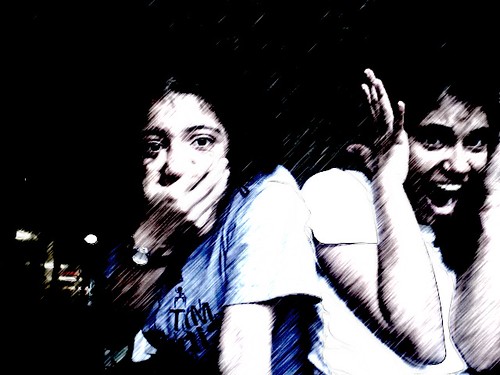 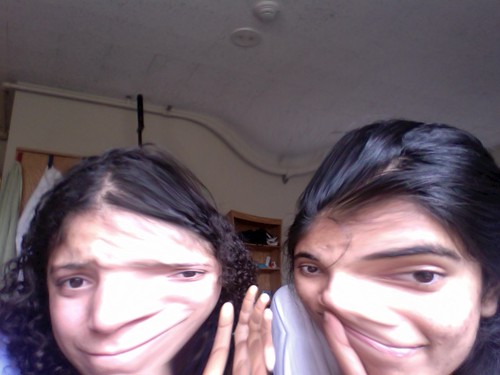 I joined LTI – the Leadership Training Institute‘s Expansion team. I’m going to try to help with the logistics of LTI-Brazil and LTI-China however I can with my limited experience (and time X_X), but I’m also trying to see if we can bring this awesome program (to train high school students to lead their own community service projects!) to Puerto Rico! Gotta work on my spanish skillz X_____X

In addition, I’ve been trying to get more involved in environmental stuff outside of Terrascope. For instance, I’m helping Biodiesel @ MIT with their Biodiesel @ Brazil project (we’re writing the proposal now… gotta work on this!).

I’ve also joined the Organizing Team for MIT’s Sustainability Summit, taking place the Friday of Earth Day week (I believe) in April 2010. Almost everyone organizing this event is from Sloan (MIT’s graduate school of management) except for me, another college freshman, and a Ph.D. candidate. It’s pretty awesome. We had a social last night and they took us out to dinner XD They also had some great ideas about good “green” careers. I’ll elaborate on an upcoming post about going “green!”

One last thing on that environmental note: I defied time by biking all the way to Northeastern University for the Boston Vegetarian Festival two Sundays ago. Sooo much food, sooo much info… it was amazing. Beyonnnd amazing. I only wish I had more pictures… I had like a brownie, samples of raw food bars, cous cous, hummus, asian food, etc., etc. 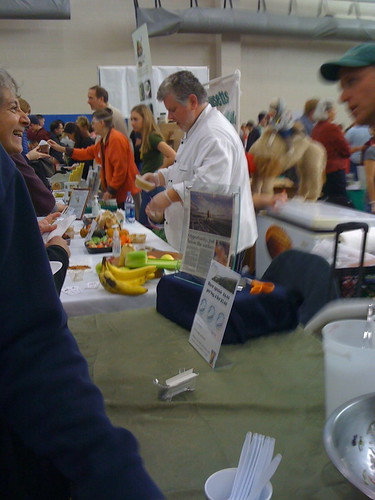 I’m also trying to get back into Sport Tae Kwon Do, but I wanted to take a look at the variety of martial arts MIT has to offer as well. I really need to get back into shape, that’s one of my goals, haven’t been exercising much at all… treadmills work wonders, it would be a dream to run/swim/do weight training/one of these at least four days a week… XDD

Ohhhh, and on THAT note… I should try to stay healthy. Got to start cooking healthy foods (there’s oatmeal and stuff to make lentil burgers sitting in my room…). And I need to force myself to sleep at 12-1. At least 80% of the time if possible.

And I need to go to medical and get this eye checked out.

And then study for physics. And then do chem.

So there’s one chapter of my quest to find a balance at MIT. 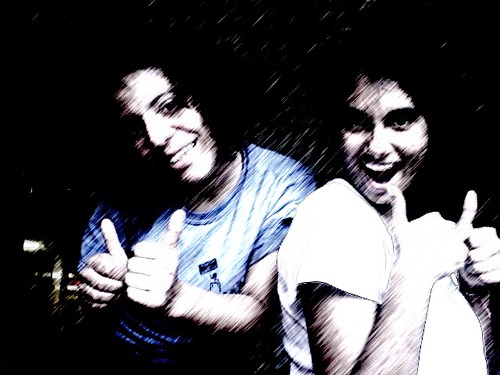 I can't remember a day without one moment – at least one – when I haven't stopped in my tracks and wondered what life would be like in an alternative universe. Not necessarily one with elves or aliens. One where I have different parents or a different heritage, one where I'm living in a developing c…
Keep Reading