in which I say hello, and explain that unclosed parenthesis.

On December 17, 2011* at 12:17pm EST**, I was accepted to MIT. After slamming my laptop lid shut, running around the house screaming, and generally alarming everyone within a half-mile radius, I promptly posted a lame Facebook status about it and got a bunch of likes.

Since then, I’ve been asked the question “Why MIT?” more times than I thought possible.

That’s a difficult question for me to answer, because there’s so much I could say. I could mention the quirky culture, the hacks, the UROPs, the pset parties***, the awesome people – but if I had to narrow it down to what first made me notice MIT, it would be the blogs.

You see, when I was a wee tenth grader (remember when the site looked like this? I’m old, man), the blogs were my first window into MIT – my first glimpse into all the previously mentioned Awesome Stuff that it offered. And I loved what I saw – not just the content of the blogs, but also the fairly radical concept of allowing students to post freely and honestly about what they felt about a school on its admissions website (which, incidentally, appealed to the journalist side of me).

And that’s why I’m really, really excited to join the blogs. I want to pay it forward – to be a window into MIT for others, to provide some insight that a high school student looking at colleges couldn’t have gleaned from a glossy brochure.

That’s not to say that I know what I’ll be posting about over the next few years, because I don’t. They**** say MIT’s like a box of chocolates, or Schrödinger’s cat, or a box of chocolate Schrödinger’s cats, in you never know what you’re going to get. But I do expect that my MIT experience will transform me in ways that I never expected, expose me to people I never would have met, challenge me more than I’ve ever been challenged before. I wouldn’t have come here otherwise.

So as you follow me through my blogographical and MIT-ographical adventure (I’m not assuming too much here, am I? please follow me), picture this post as an unclosed parenthesis – the metaphorical beginning of an metaphorically open-ended journey (ooh, this is getting deep).

Over the next four years, let’s see if we can close that parenthesis.

*that’s Earth years, by the way. I’m finally off the Martian calendar because I kept showing up 687 days early to appointments
**actually 12:19 because my Internet lags and is measured in carrier pigeons per second
***let it be known to all that as a naive prefrosh, Michael once looked forward to psets
****I 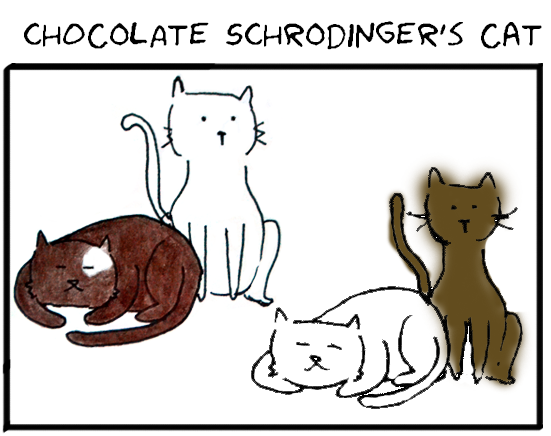 (cats courtesy of my friend Alison)

The cats are simultaneously dark and white chocolate.