Camp Kesem MIT is a one-week, free summer camp that takes place towards the end of August and is geared towards kids whose parents have been affected by cancer. Each summer, a combination of kids and counselors (all of whom are MIT students) come together for a week of pure camp fun – filled with sports, nature activities, arts and crafts, ropes courses, drama rotations, swimming, hiking, and more. Planning for each camp session is done entirely by a coordinator board made up of ~15 MIT students; this board starts preparing for the following Camp session as soon as the present session is done.

I was a counselor for Camp Kesem MIT during my freshman and sophomore summers at MIT, and I’ve been a part of the coordinator board for a year and a half now. I LOVE CAMP. Throughout the year, we hold a number of events and fundraisers on campus to raise the $65,000 we need to make Camp Kesem happen each summer.

One such event took place this past weekend: The Camp Kesem-SAE Date Auction. SAE (Sigma Alpha Epsilon) is one of MIT’s fraternities and has been our partner for the Date Auction event for three years now. During the event, a number of MIT students are “auctioned” off, with gift cards to local restaurants and businesses. Typically, a “date” is bought by his or her friends, who pool together and “buy” their friend for an impressive sum. (I hope I’m doing a decent and not-sketchy job of describing this; please feel free to question me about any details that seem awkward – it’s an awesome event, I promise!) The businesses that donated prizes to this year’s date auction were California Pizza Kitchen, F1 Racing, Vapiano’s, Melting Pot, among other places. We raised over $6600 in just two hours through this Date Auction event!! 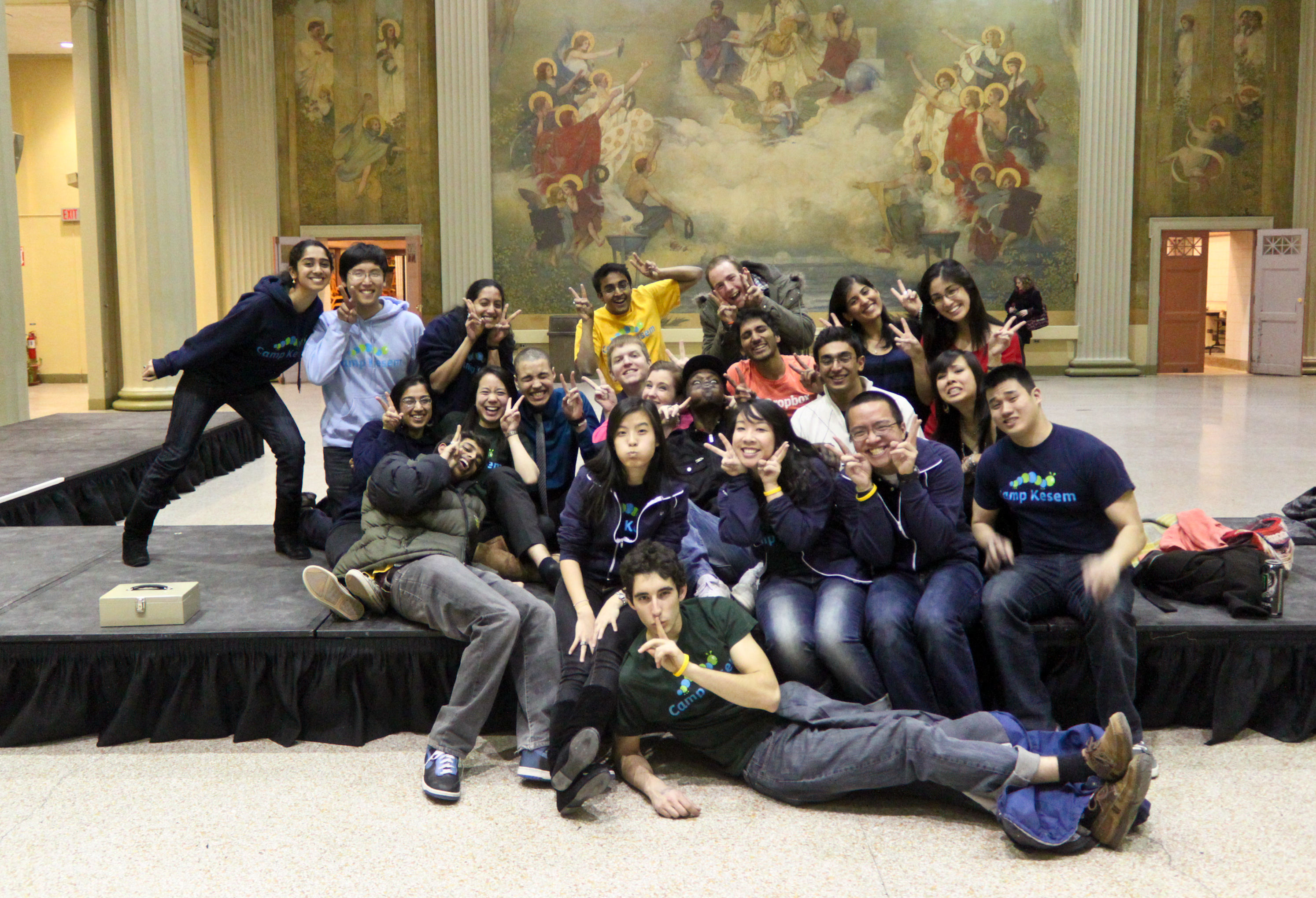 Every time I do something CK-related, I’m reminded of how lucky I am to have a happy, healthy family that hasn’t been affected by cancer. The kids I meet at Camp are so strong and resilient – each year I go to Camp, I’m blown away by their maturity and their stories. They’re the best kids ever <3

To add a personal touch to this blog entry, I want to introduce Jenn Lai ‘11– an MIT alum and a Rhodes Scholar. This is her story with cancer–

I’ve always been fascinated by personal stories. Everyone has pivotal experiences, those experiences that become skyscrapers in their life landscape, forever altering their perception of things around them. It’s just so happened that my skyscrapers were built by something called cancer.
When I was seven years old, my mother passed away from cancer. At the time, I had no idea what cancer was; I hardly even understood what was going on around me. All I knew was that there was a thing called cancer and that it was bad.

It wasn’t until some of my high school biology classes that I started to learn about the biological underpinnings of cancer. The topic fascinated me; it was sort of a guilty pleasure to learn about cancer. It gave me a glimpse into what occurred in my mother’s body, bringing me one step closer to understanding what had happened so many years ago. Cancer, I learned, is generally a disease of the old. As our bodies age, cells accumulate mutations in their growth mechanisms driving them to eventually overtake the body. I could imagine these malignant cells growing without bound in my mother’s body. Yet something didn’t make sense. My mom wasn’t old. She was forty.

It was around the time that I was applying to MD/PhD programs at the end of my MIT career that I started to do a little more digging. In trying to distill my reasons for wanting to become a physician scientist, it only made sense to investigate my own medical history. My mother had both breast and stomach cancer, I found out. She was diagnosed with ductal breast cancer in January 1997. The prognosis after surgery and radiation was good. Several months later, after undergoing surgical exploration for a case of ascites, build up of fluid in the peritoneal cavity, the surgeons found invasive gastric cancer. She passed away in September 1997. My maternal grandfather also passed away from some form of gastric cancer, as did a maternal aunt.

Curious, I typed into my Google search bar: hereditary gastric cancer. Among the first results that came up were some articles about hereditary diffuse gastric cancer (HDGC). I clicked on one, then another, then another. HDGC, I found out, is a relatively rare form of hereditary gastric cancer that is passed in an autosomal dominant fashion–if one parent is affected, each offspring has a fifty percent chance of also being affected. About fifty percent of HDGC cases can be linked to a gene mutation in CDH1, which encodes for the cell adhesion protein E-cadherin. Mutation carriers have about an 80%/70% (female/male) lifetime risk of developing the cancer by the age of 80, with median age of onset at around age 40. Diffuse gastric cancer is unfortunately very difficult to detect early by endoscopy, as the cancer grows in clusters in the lining of the stomach rather than in a distinct mass. By the time diffuse gastric cancer becomes symptomatic, it is often advanced and too late for treatment. Given the high likelihood of developing diffuse gastric cancer, it is now recommended that CDH1 mutation carriers undergo preventative removal of the entire stomach, a drastic but necessary measure.

After reading as much as I could about HDGC and CDH1, I looked into the criteria for getting a genetic test done and knew that I had to get tested. I had my blood drawn and sent to City of Hope in August 2010, and by December 2010 I knew that I am a CDH1 mutation carrier.
The implications of a positive test result are vast: coming to terms with destiny, deciding to get surgery and when, figuring out how it will affect my life and the plans I’d set out for myself. It came at a time when I knew I’d be moving to Oxford, then later dedicating at least eight years of my life to MD/PhD training with more years of medical training after. It’s been a long journey, which I could probably write an entire series of books on, and it’s not over yet. The main storyline is this: I have now decided to take time off from school to concentrate on my health. I will be having my surgery done in a couple of weeks at home in Honolulu, Hawaii, then will return to school in the fall.

The immediate response I get from most people is usually something along the lines of, “What!? You can live without a stomach?!” The short answer is yes– the stomach is actually surprisingly overrated. It’ll be an adjustment, and it’ll take time, but the fact is that it is both possible and necessary.
I’ve had plenty of time to think about if I am really making the right decision. Removing an organ is a big step. It is true that I wish I didn’t have to do it, but the reality is hard to ignore. After my mother passed away, I had a subconscious expectation that I wouldn’t live much beyond forty– maybe that’s why I have always worked so hard. Now I know that without this surgery, my life expectancy would be forty. As tumultuous as this entire experience has been, it is liberating to know that I will now have a pretty normal life expectancy. There is so much to do with that time– it really is a gift.
If I didn’t have a good reason to go into medicine and research before, I do now. The fact that preventative surgery is the only safe option for me sometimes makes me frustrated. It has also shown me that there are very real medical problems that still need to be solved, and this is only one of them. I can’t wait until I can move on to the next chapter of my life and start addressing these problems academically. In the meantime, I am focusing on enjoying every bite of every meal and the sunny Hawaiian days.

Jenn is the author of the blog gastronomically speaking, and she welcomes you to follow the rest of her journey. To find out more about gastric cancer and spread gastric cancer awareness, please visit No Stomach for Cancer.