chalk art at the welcome center

This summer, I got a side gig to put up chalk art in the Welcome Center, which opened last year. I use these two blackboards that have wheels on them so you can roll them out into the lobby for visitors to see. Every week, I’ve been putting chalk art up on one of the boards, as well as writing a prompt on the other board that visitors can write answers for.

Chalk art’s already a thing that you see a lot on campus (see: MIT Chalk of the Day). The gig I’m doing kind of extends that part of student life into the tourist scene on campus. 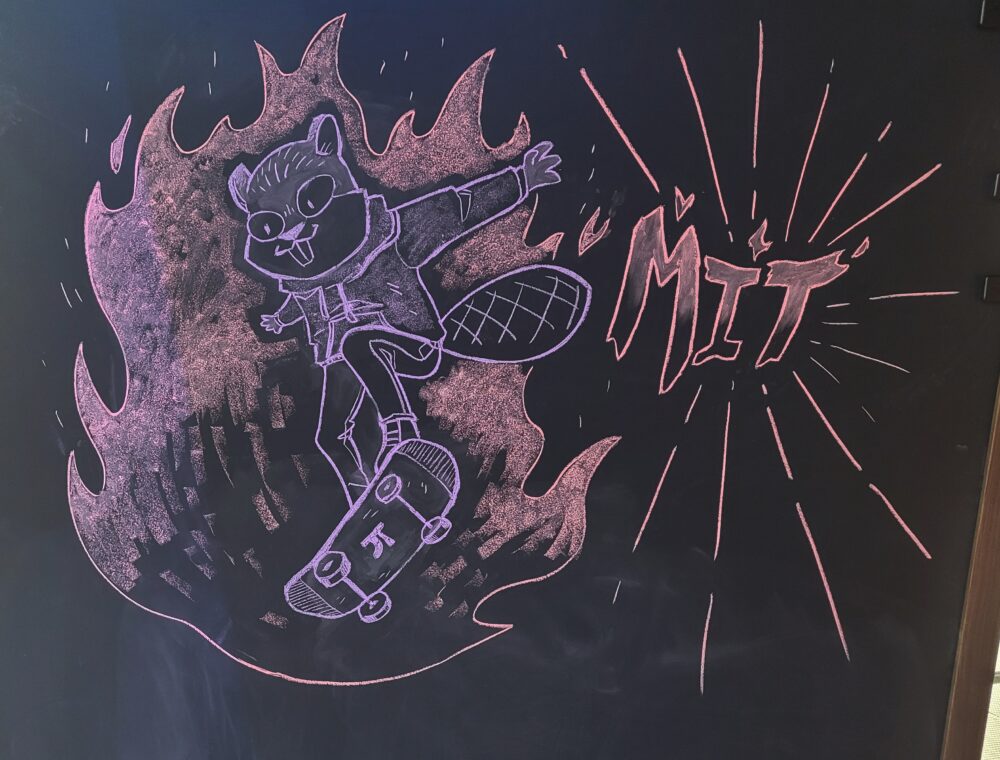 Drawing: Tim the Beaver on a skateboard, doing an ollie out of a giant fire behind him

I slapped a π on the deck because I figured it would be on-brand for MIT. And there’s flames in the background! For no reason! 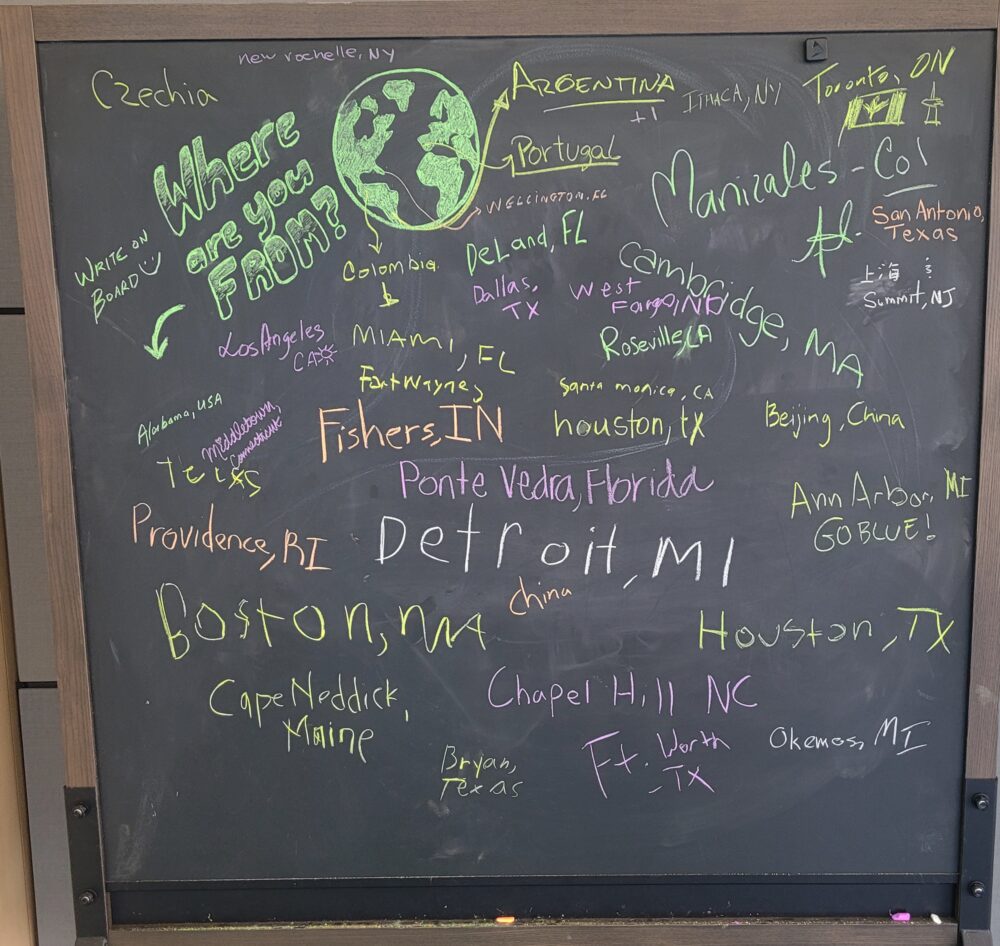 Prompt: “Where are you from?”

Standard question, nothing too weird. The answers got me wondering how large of a range of places people are coming from to visit the Welcome Center (see: Week 3).

Right after I finished this, I remember thinking, I’ve gone too far. Whoever wrote MIT’s graphic identity rules would writhe in pain if they saw Tim the Beaver dressed up like a magical Japanese schoolgirl.

A few hours later, Kellen asked if I could draw Sailor Moon Tim so he could put it up on the MIT Admissions Instagram page before he left. Is it blessed or cursed? I can’t say for sure, but now it’s on the Insta page for everyone to see. 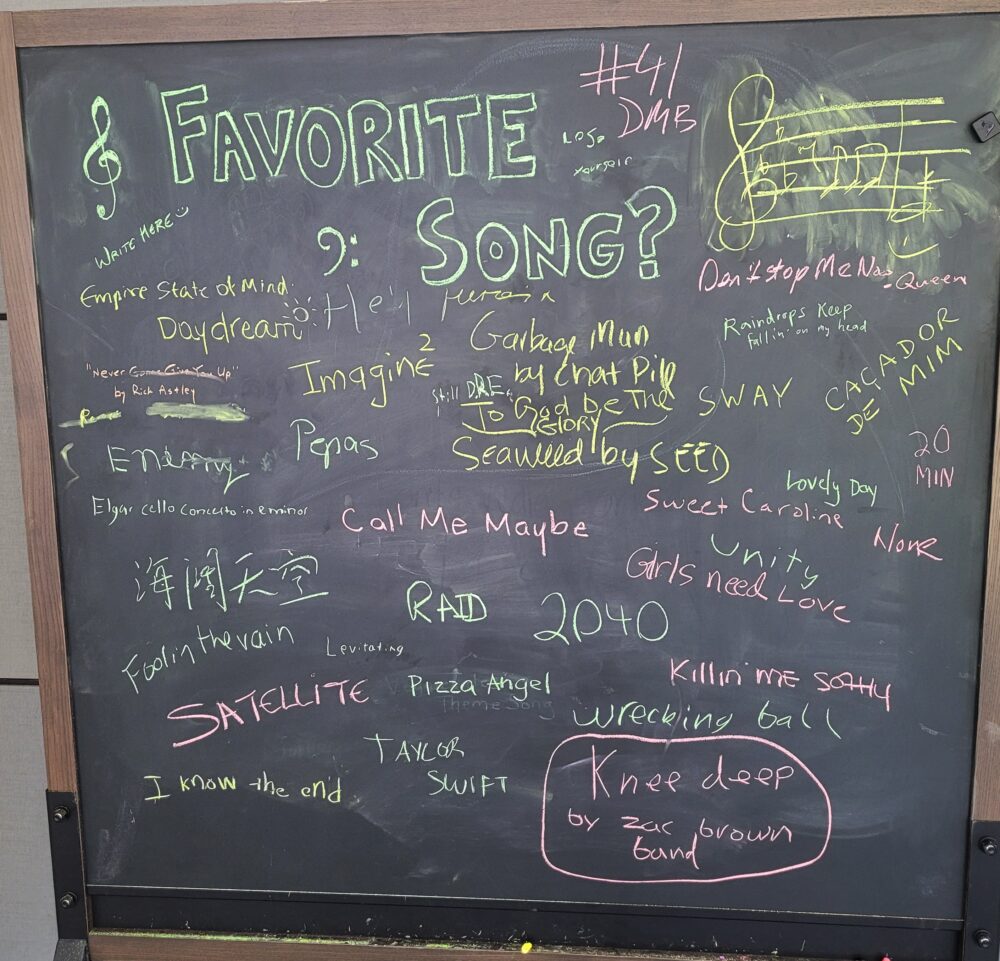 I wrote “Never Gonna Give You Up” by Rick Astley for the meme, but I don’t really have a favorite song. I usually alternate between a variety of alternative hip hop and indie rock/punk. 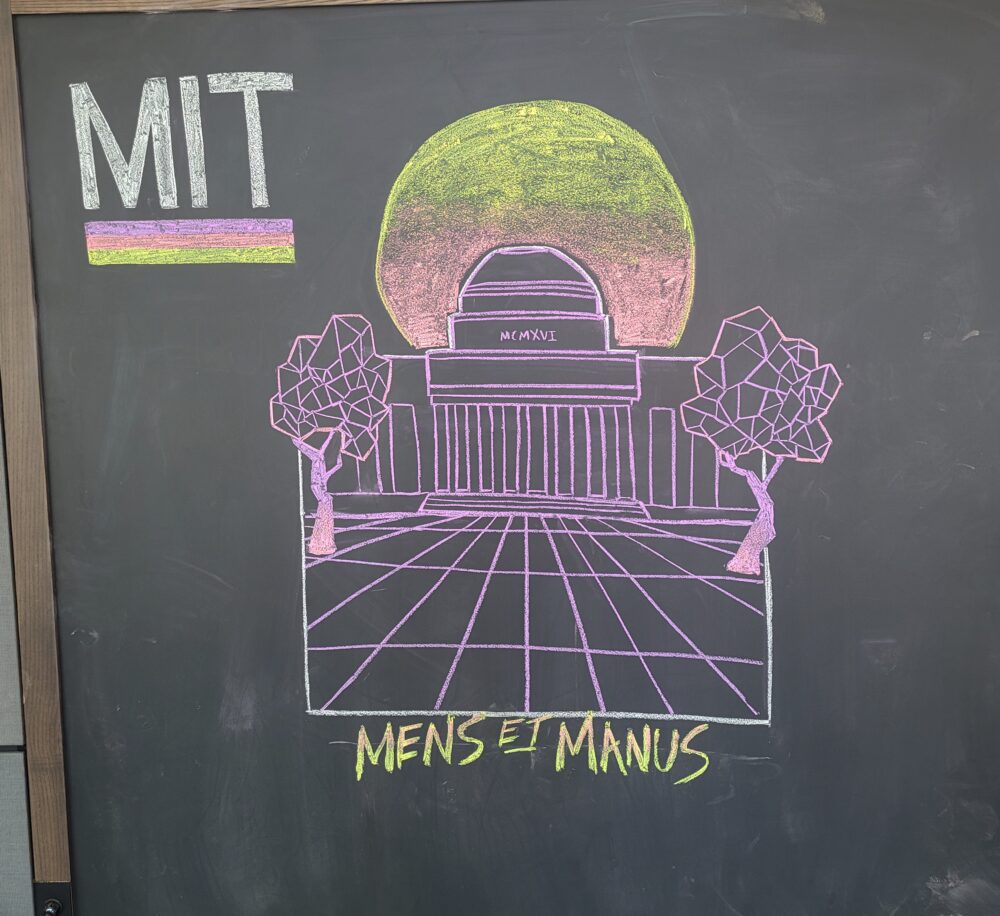 Out of all of the chalk drawings in this post, this is the only one I had planned out beforehand. Honestly, I’m proud of how it turned out!

Inspired by the “RetroWave/Outrun” playlist on Spotify. 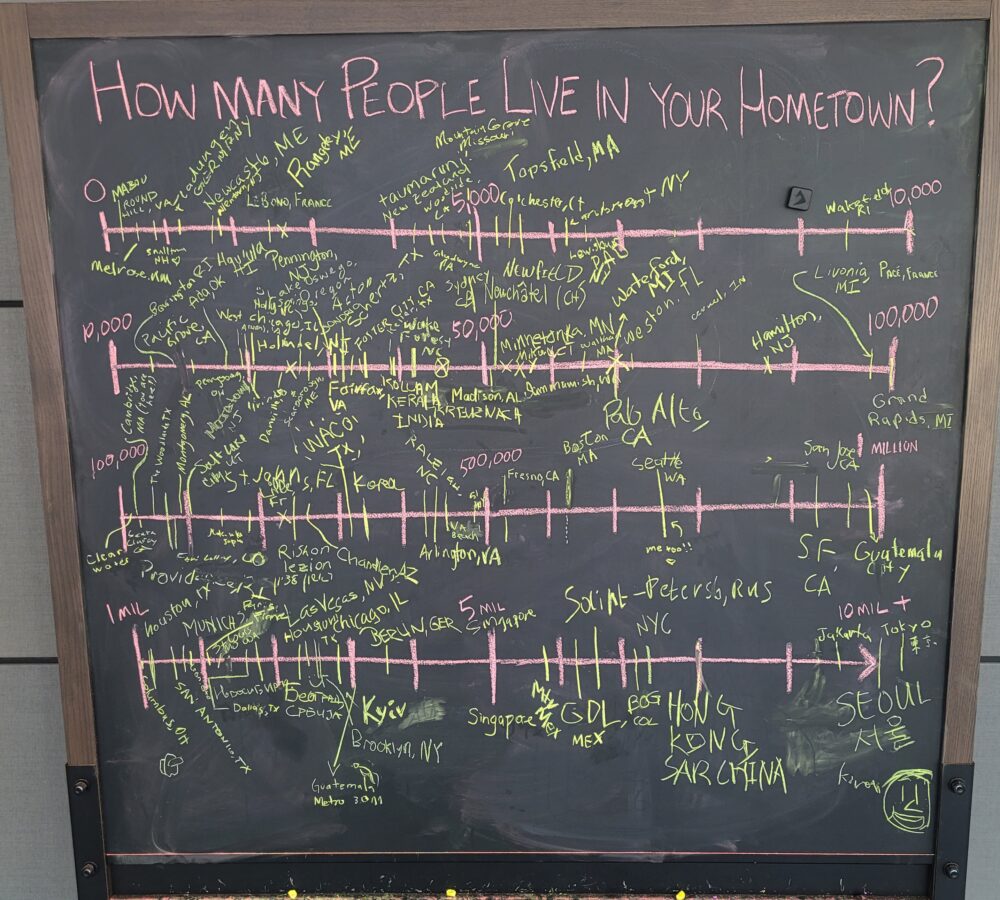 Prompt: “How many people live in your hometown?”

My personal favorite prompt. I spotted someone else who was from Alabama. 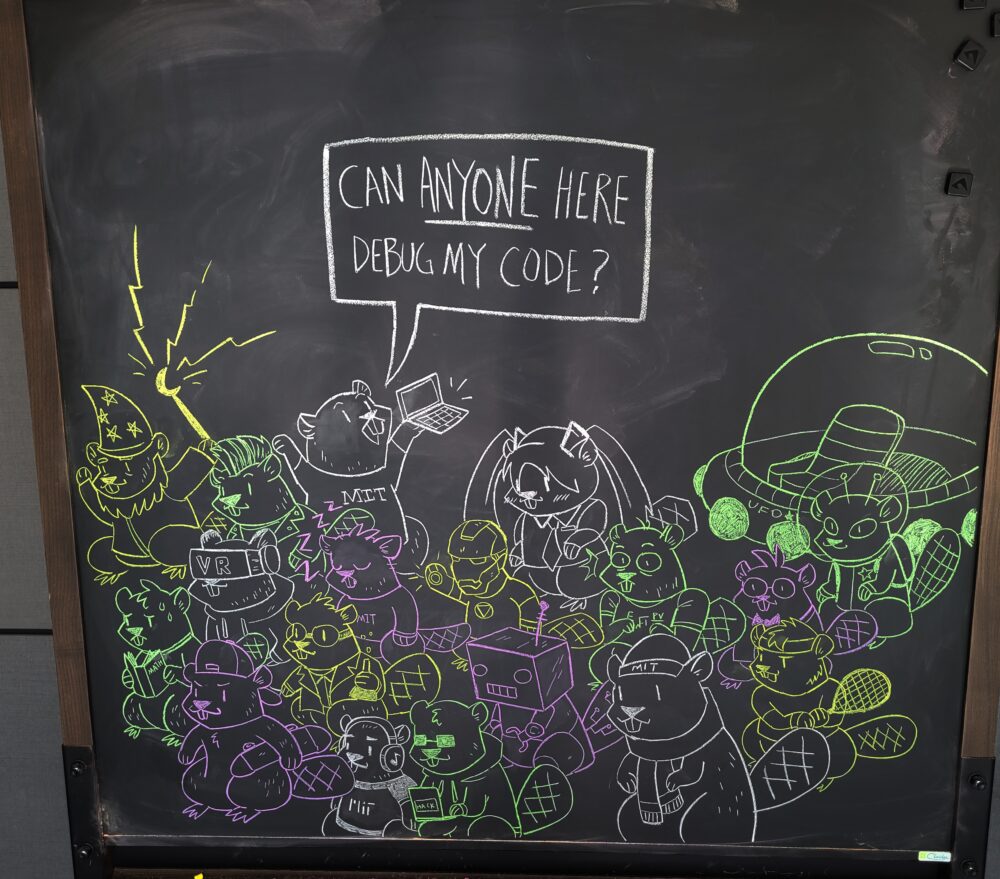 Drawing: An assortment of beavers

I was originally going to fill the entire board with beavers, but I was getting hungry so I put up a speech bubble to fill the remaining space instead. My favorite one is the alien. 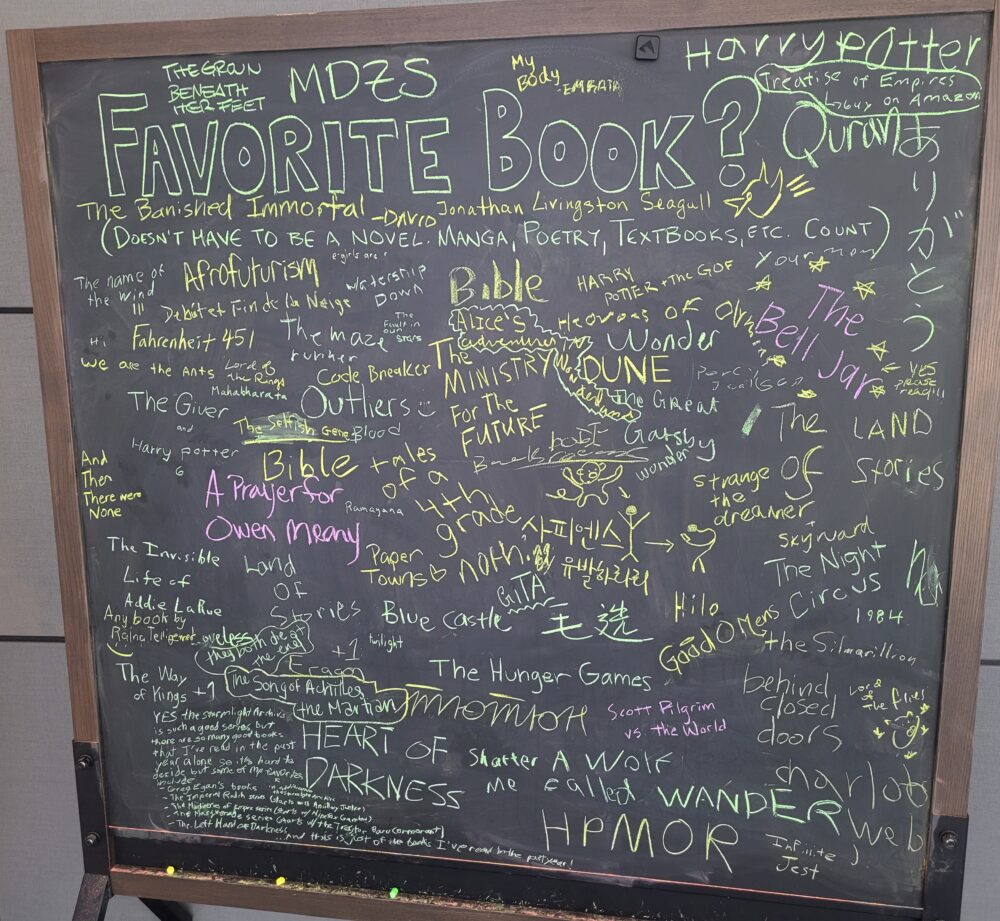 I just put up a generic prompt because I didn’t know what to put that day, but I was surprised by how much personality there was in the responsive people gave, even if they didn’t intend to do that.

I really liked reading this person’s response in particular because it seemed like they put a lot of effort into their answer, despite the fact that it was going to get erased eventually. Really shows how much they wanted to share the books they enjoyed.

“YES The Stormlight Archive is such a good series, but there are so many good books that I’ve read in the past year alone so it’s hard to decide, but some of my favorites include:

… and this is just of the books I’ve read in the past year!” 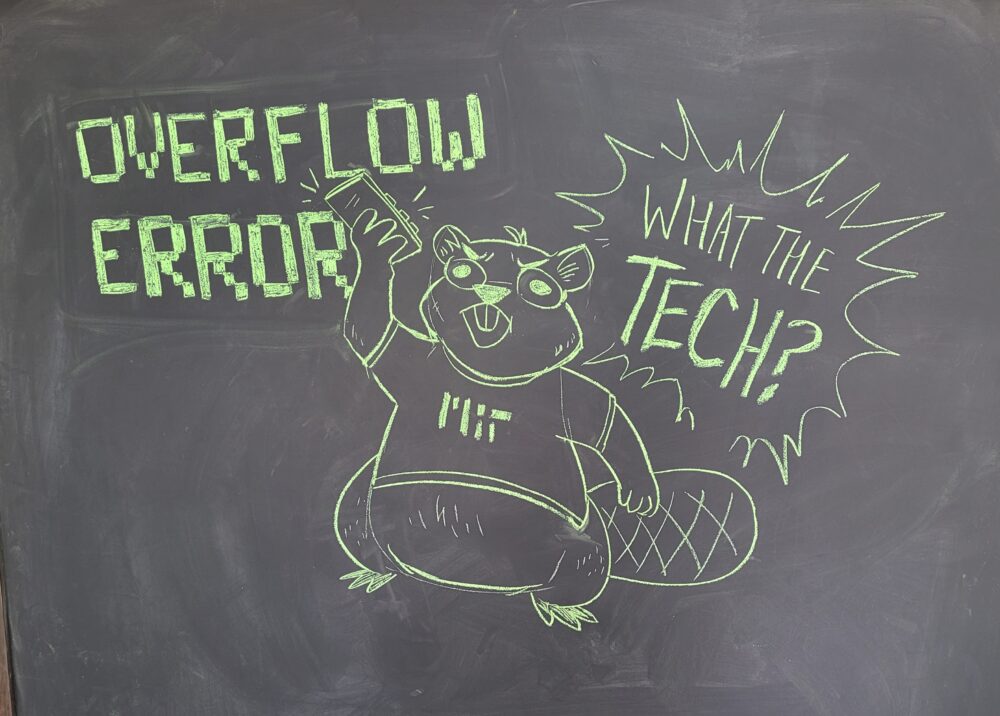 Just wanted to draw something silly and corny. 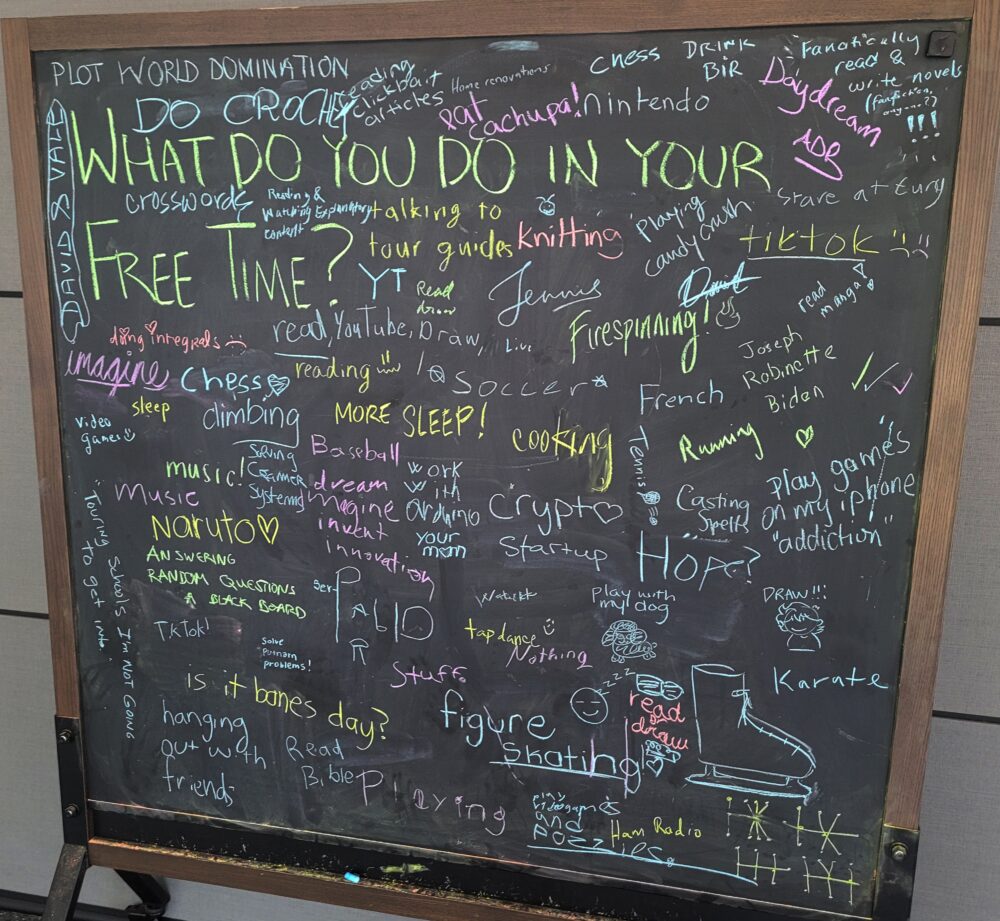 Prompt: “What do you do in your free time?”

I also looked up what cachupa was because someone mentioned that. Definitely going to try that someday.

Something experimental! So the interesting part is that people were able to commit to building the maze from the start and the end, but the overall effort fell apart in the center. Somebody got bored and drew a face, and somebody else played two of the most scuffed Tic-Tac-Toe games that I’ve ever seen.

I smell a cheater. 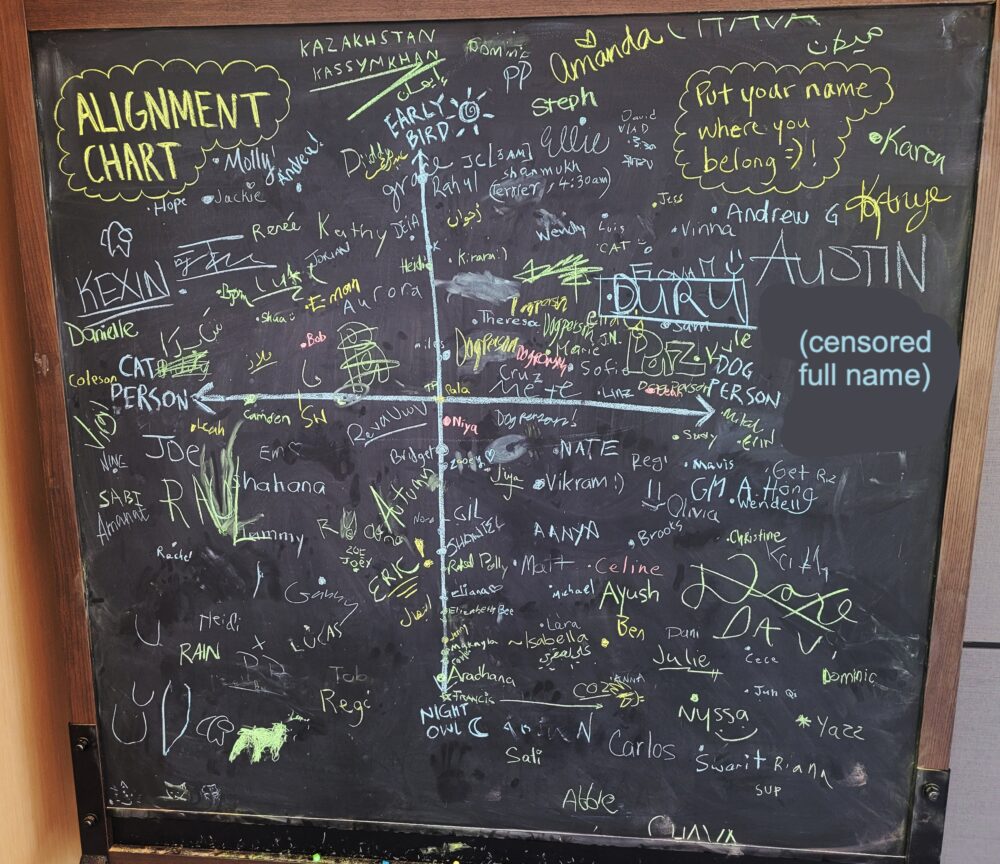 My hypothesis was that the data was going to skew towards the bottom two quadrants, but it was a lot more evenly distributed than I expected. Turns out that I’m just surrounded by night owls, so I put my bias into my assumption.

There are also three people who wrote “Dog Person” instead of their own name. 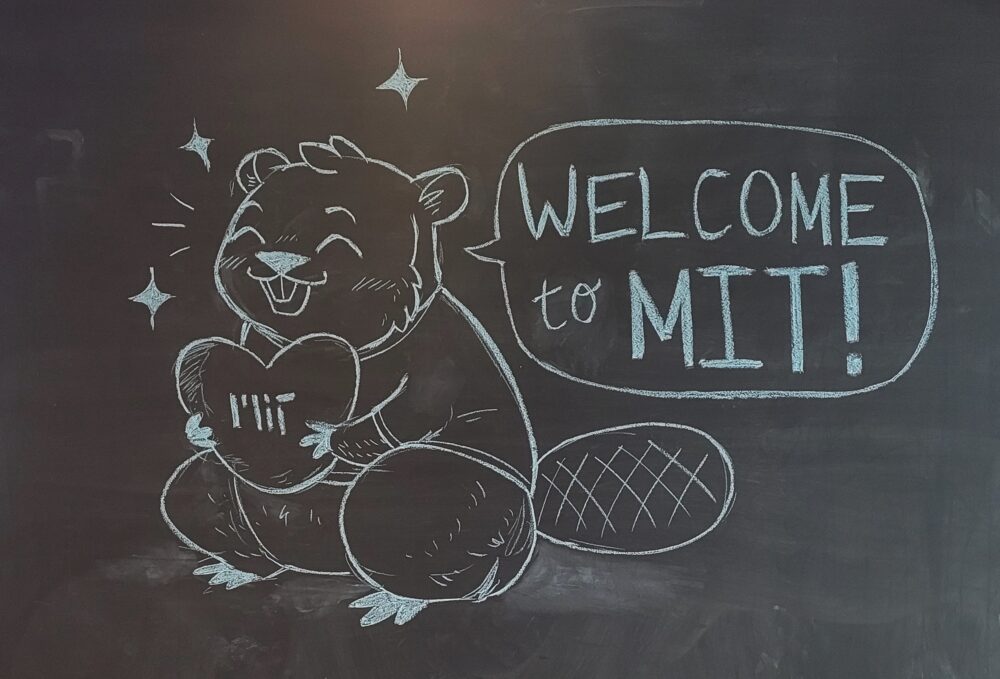 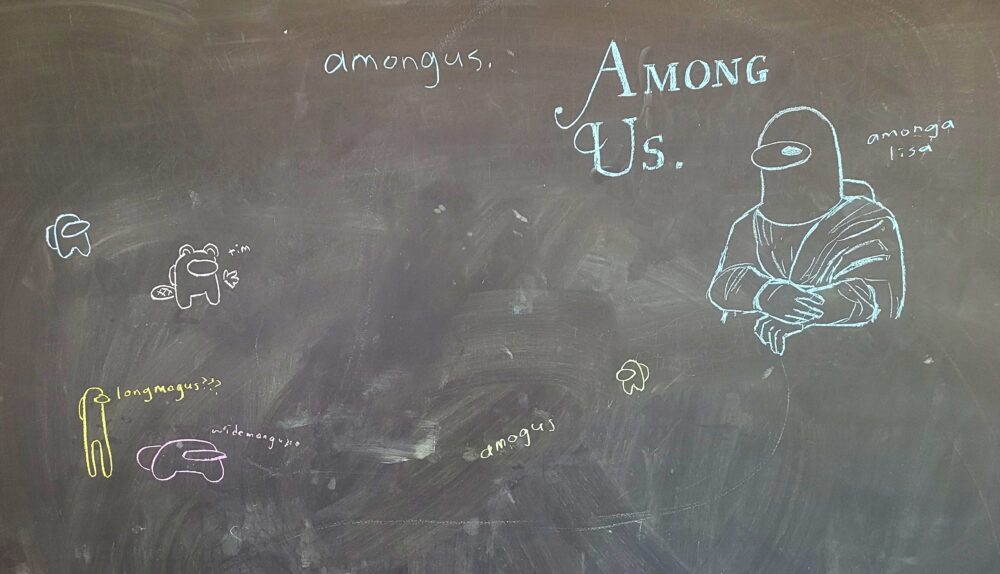 Okay, I promise I put more thought into this than it looks. People would draw Among Us crewmates on the boards all the time, so I wanted to manifest that energy.

At first, I wrote down “Chalk prompt of the week! amongus” to let people know that I was putting a ✨funny twist✨ on the prompt, but it gave off the same vibes as a teacher trying too hard to relate to their students. Multiple layers of lame.

So instead, I added some amonguses to the board to make it look like different people drew them in passing (hence the different colors), so people would be encouraged to fill the board with amongus themselves.

However, my social experiment was halted prematurely. The next day, the board was turned around so the amonguses were hidden and the other side had “Where are you from?” written on it in pretty lettering. I don’t hold any hard feelings. It was too experimental and wasn’t a great prompt for visitors of all ages to interact with.

But, I get to tell people that I drew Amonga Lisa for my job. That’s a win.

Hi! I'm Jenny (also known as "Jebby," also known as "Bebby"), and I'm a prospective Course 6 major (EECS) with the goal to make an AI that will take over the world or something funny like that. This is the first time I’ve lived outside of the American South, so I always wondered what it was like …
Keep Reading