CPW on the Web by Chris Peterson SM '13

CPW comes to you...ON THE INTERNET

Other than spending a few hours last night br√ºtally annihilating people in G√∂d √∂f W√§r III*, I, like everyone else in the office, have spent most of the last week working on stuff for Campus Preview Weekend, including how to make it more accessible for the students who attend.

One thing you should know about CPW is that it’s absolutely massive. We have well over 600 events over the course of a few days, and the prefrosh add 25% to the undergraduate population for the weekend they’re here. The MIT community is incredibly devoted to CPW, hosts a ton of excellent events, and generally makes this one of the most BAMF weekends on the East Coast.

The difficulty, of course, posed by such an abundance of awesomeness is how to keep track of it all!

In the past, we’ve given our CPW attendees novel-length directories of the events and important stuff at CPW. And we’ll still be doing that this year.

However, we’ll also be introducing some online options, including:

Leading off the list is the MIT CPW app for the iPhone OS, available for both the phone and the iPod Touch series. The app is free, and features: 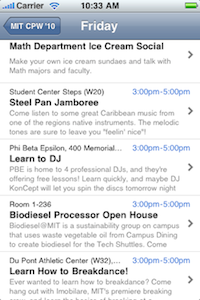 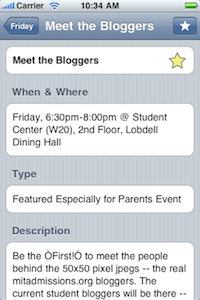 The app was created by Bridger Maxwell ’13, a Course VI major and iPhone Developer. The short URL for the app is http://bit.ly/cpwapp.

Not everyone uses the iPhone OS, so we’re making the calendar available in open formats as well. Ben Weissmann, ’14 (a prefrosh attending CPW himself) thoughtfully wrote a Ruby script to scrape the schedule off of our site and put it into iCal format, which we then extended using Google Calendar.

So if you don’t have an iPhone, or want to do something with the schedule data yourself, here you go:

And here’s the agenda itself:

Last but not least, we’ll be tweeting up a storm. As with last year, the main account is @mitcpw (managed by Admissions Officer Jen Wong, who deserves a big thanks for managing it). The hashtag is #mitcpw. The whole admissions team will be tweeting to that hashtag (generally retweeted by @mitcpw as well) and I personally am at @peteyMIT.

Hopefully, these web tools will help keep you connected at CPW. If something breaks, or if you have a suggestion of something else we could do to make things more accessible, just drop me a line!

See you next weekend!

* umlauts are performative. Don’t try to pronounce it like this unless you want people to look at you weirdly and ask if you’re recovering from protracted dental surgery.