Do You Wanna Build A Snowman? by Vincent A. '17

And thanks to an awesome friend, I built my first one!

Sleeping at night has become one of those mythical concepts this IAP, like unicorns or people that don’t like Taylor Swift.

The backstory explaining this is relatively simple. A friend and I were taking the same Intro to Java class this IAP, and spent over 24 hours working on one of the problem sets, 15 (hours) of which happened consecutively (from 9pm on Thursday to Noon on Friday). Ever since then, I’ve had an inverted sleep pattern I’ve been too lazy to change. It’s nighttime when my eyes open, and the middle of the day when I go to bed. In either case, I always have my Taylor Swift playlist close by so I’m always happy. And IAP has come with a fair amount of work, but not nearly enough that I can’t sleep an arbitrary number of hours per day, which I can.

Thankfully, MIT never sleeps. So while I was up last morning at seven a.m., making my way through the sixth season of Sons of Anarchy in the Destiny Kitchen Lounge, Kevin Morrow ’18—whose sleep pattern has also been inverted—was up and about. Suddenly, he burst into the kitchen excitedly, saying something about snow.

Now, I saw snow for the first time in November 2013. Those fluffy dandruff-like powdery demons were cute for the first three days, but quickly overstayed their welcome and threatened to drown me each time I stepped out of Random. So I doubted I could really be excited about snow. My heretic thoughts vanished the moment I stepped out of the kitchen and peered through one of Random Hall’s glass entrance doors, and into the winter wonderland beyond.

The sidewalks and alleys were covered in snow, thick white snow that looked like they would be so much fun to crunch through in boots. The sky seemed gray and cloudless, and from every part of it, flurries of snow descended in non-original patterns that we’ve all seen before. Yet, there was something beautiful about the snow falling against the stark backdrop—plus snow had been lacking in the past few weeks, enough so that its presence this morning was more than appreciated.

Then Kevin suggested that we go to Killian Court—which is an eight-minute walk from Random—and catch the sunrise. Plus apparently there would be so much snow there.

Let’s see. Dorm, warm. Kitchen, toasty. With fridges. And food. Outside, gray. Cold. Beautiful, but beautiful in the way terrifying cyclones captured on a blank canvass might be beautiful—the kind of beauty you can mope dreamily at, but would rather not step into, because why would you. But he seemed pretty excited, and I realized that I had never really done anything with snow beyond stare at it and flee from it.

So twenty minutes later, Kevin and I were crunching our way down Mass Ave and toward Killian. And at this point, words fail to do justice to what happened. I had my first adventure with snow, and it was awesome.

First, Kevin and I started out tamely. We just took pictures, the Dome protective behind us. 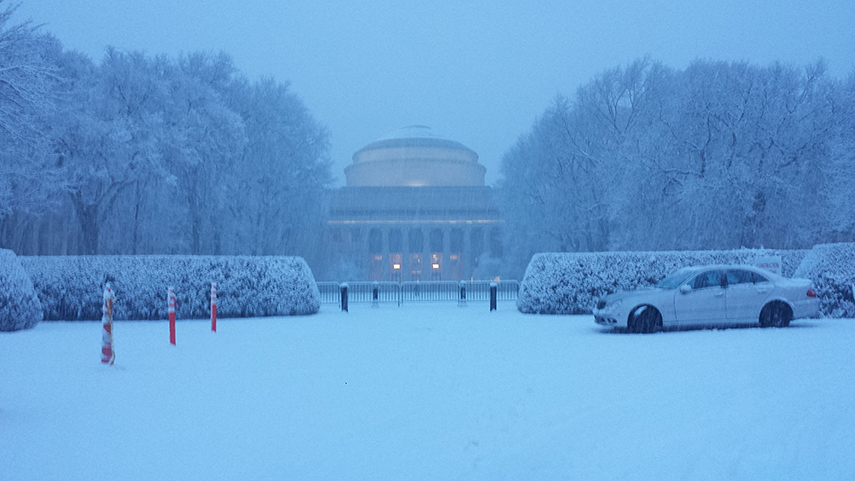 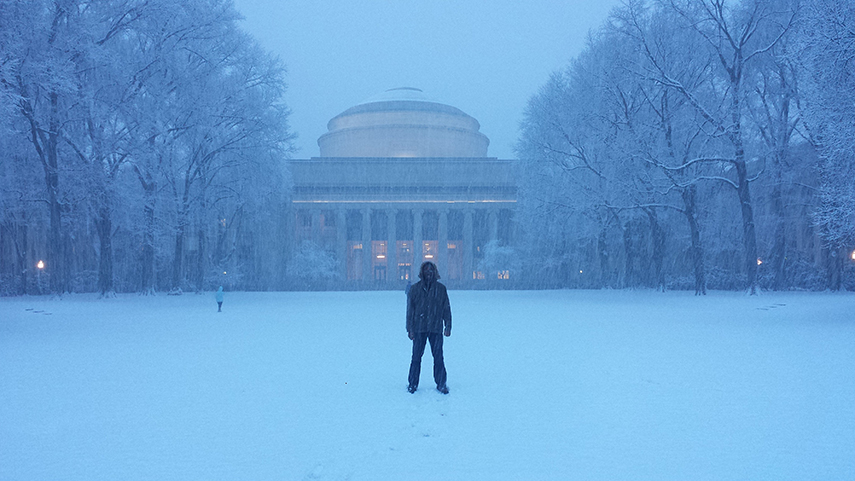 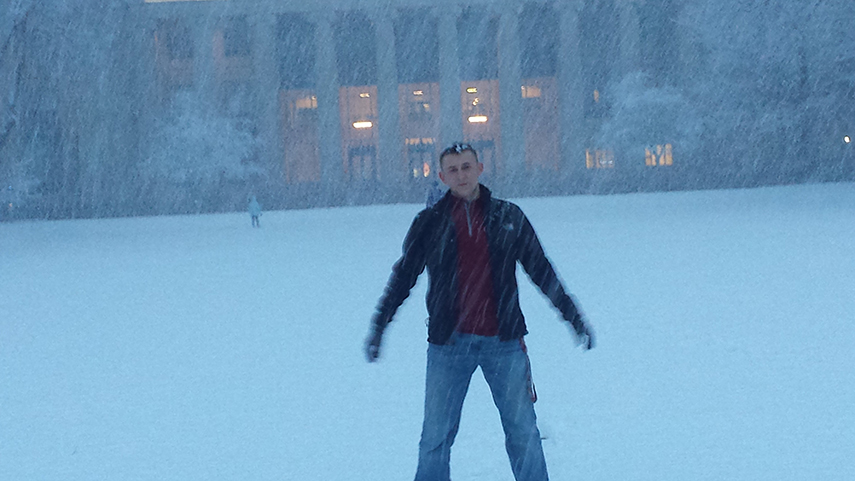 Then Kevin collapsed on the snowy ground and began flapping his arms and legs. My first thought was that he was an alien creature about to take flight, and he was doing some masochistic snow-dance communication-thingy/self-procreation/photosynthesis ritual to call in the alien cannibals to feast on the cold, snowy, Taylor-Swift-loving skin that I—

Oh. It’s a snow angel! Like in the movies! I’d only ever seen snow angels in the movies. I told him I’d never done one. He exclaimed incredulously. Told me to do one. And I did one. My first snow angel! Just dropped to the ground and swung my arms and legs in arcs. 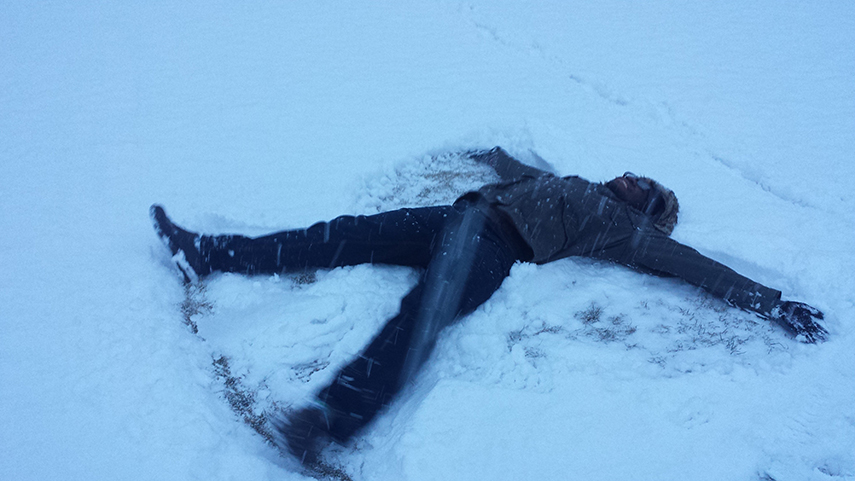 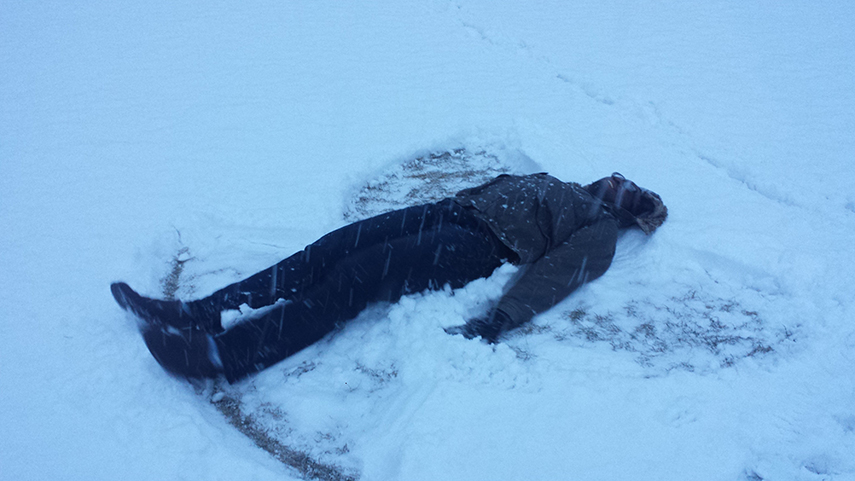 Fewer sights made me happier than the angel I printed on the snow. Sniff.

Then I scooped up a thick clump of snow and flung them at Kevin, but they scattered into dozens of pieces before they struck him. Apparently, you had to crunch them into a hard-packed ball before flinging them. Which Kevin demonstrated. By flinging balls of snow at me :(

And then he said those magic words: “Do you wanna…

And so we set to work. He showed me how to create the base—start with a hard-packed ball of snow and roll that ball along the snowy ground until it was big enough. I was able to create the head and the middle. Then we hunted around for sticks for the arms, stones for the eyes and nose and buttons. At first, our snowman looked pretty evil, like he would strangle us given the chance. But by the time we were done, he looked pretty great. 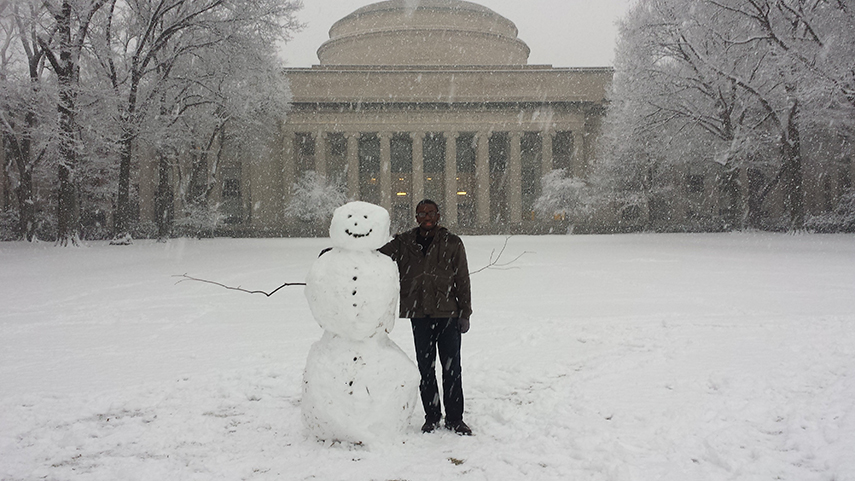 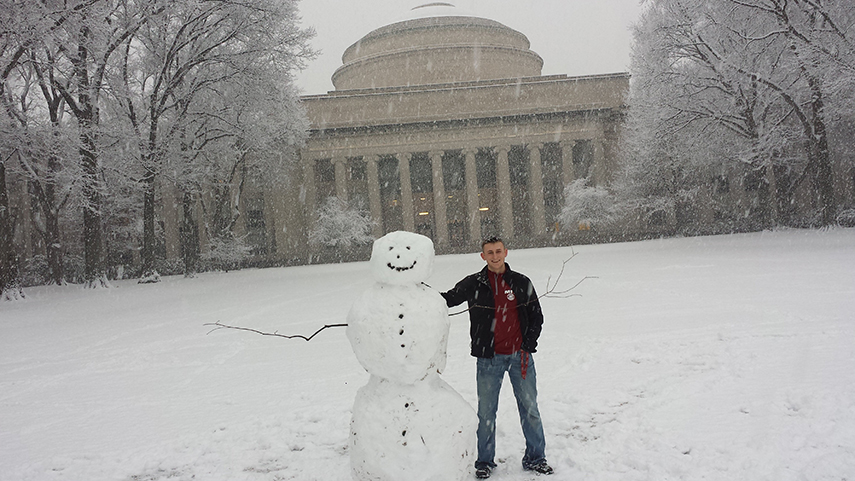 “Despite popular belief, Olaf was admitted to MIT”–Kevin Morrow

Then we had to start heading back to our dorm. I felt so sad to leave Olaf—yes we named him Olaf. But we had to. We returned to Random, cutting through a bunch of high school students preparing for a science olympiad. Kevin showed me an interesting path through MIT’s AeroAstro building that led us closer to our dorm. I couldn’t believe how much the morning had been full of laughs and relatively simple experiences that felt deeply and powerfully beautiful to me. Thanks Kevin, for this :D

I think there’s a point in your life where you realize how well things are going, how happy you are, how lucky you feel. It’s that point where the things you once saw in the movies, once told yourself you’d never see beyond those movies, occupy the entirety of your morning. It was a really wonderful morning. We built a snowman. Threw balls of snow at each other. Talked about MIT. That’s more than I’d ever dreamed of two years ago. Everything feels great.

Well, except for Olaf. I imagine he’s dead now. He’s either melted into eternal nothingness, or got kicked down by a bunch of bored kids. Oh well :(

At least I was able to give him a goodbye hug. 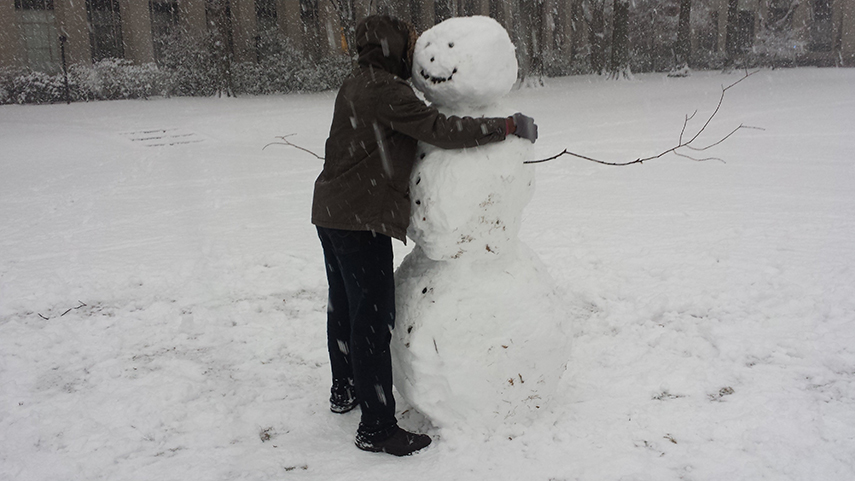