it doesn't have to be a robot (see: electric gokart section)

Below is one of the robots I built for 2.007, MIT’s extremely popular introductory design and manufacturing class: 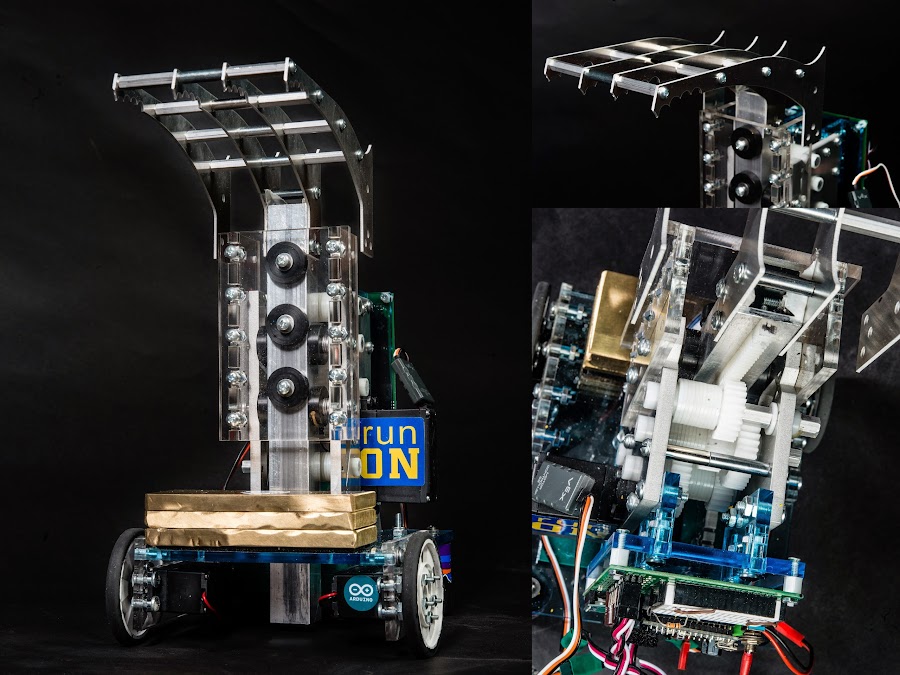 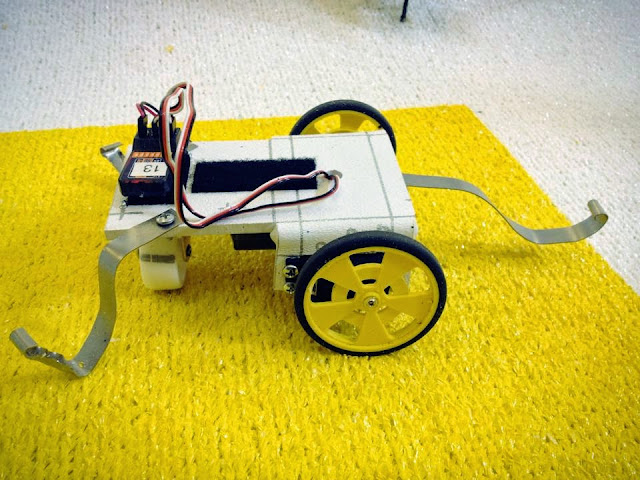 Before I took 2.007, I hadn’t ever used a mill or lathe.  I wasn’t sure what it meant to tap a hole. Heck, I’d never used a power drill before.  But four months later, I was comfortable with all of these tools, thanks in large part to the awesome shop guys (particularly Bill and Tasker). I built my first gearbox and learned how to use fast fabrication methods.  And I built a pair of robots that actually did quite well in the competition!

It’s been a lot of fun.  Here’s a rough summary of the past few months:

It’s the first day of lab and I’m a bit nervous.

2.007 is well known for its chaos and intensity, and it’s intimidating to be told that by the end of this class you’ll be building a Robot, capital ‘R’, and competing against your peers, many of whom have had years of FIRST robotics experience.  Suddenly you’re faced with design decisions, big scary machine tools that you’re not entirely comfortable turning on, part choices, and Arduinos, maybe even before you know what gears and bearings and linkages are.

So what do you do?  Like any good engineer, break it up into smaller, more manageable pieces.  Our first assignment is to build a “Mini Me” robot that can drive around from a basic list of materials.  By the end of lab, I’ve bandsawed the glorified bent piece of plastic above and stuck 2 motors + an RC receiver on it.  It’s not pretty, but it drives.

At the end of lab, my (awesome) lab instructor Chip reminds us to always fasten our wheels, because loose wheels have tripped up many a top competitor before.  ~~~foreshadowing alert~~~

Early as it is, it’s time to start thinking about the final competition.

This year’s robot competition is ski-themed – MITSKI! The instructors have build this cool course consisting of three different hills of different grades, with flags to pull, medals to collect, and trophies to pull. 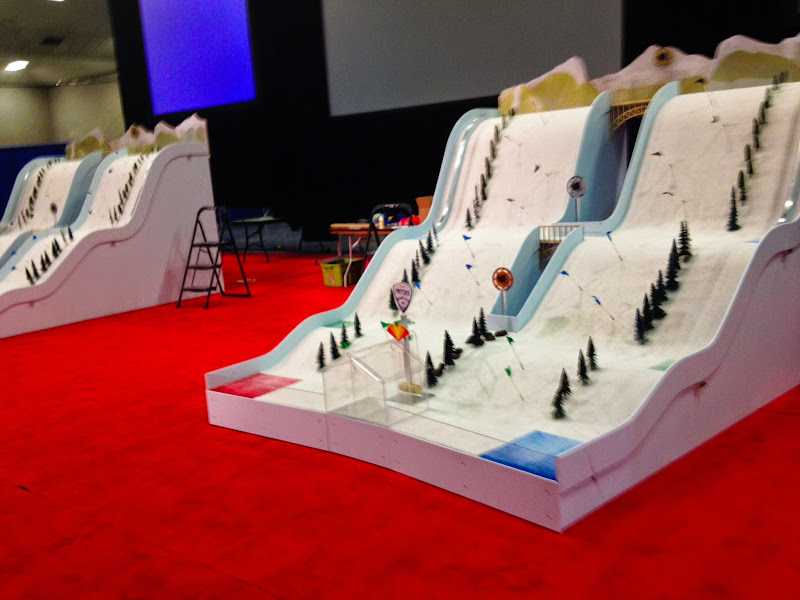 Quickly it becomes apparent that the most efficient way to score points is to do laps on the extremely steep 60 degree top hill (in hindsight, I wish they had made flag pulling worth more points, as it would have led to more interesting robot mechanisms).  It’s not a trivial problem to solve.  Because of the steepness of the hill, tipping is a problem.  Because of the slippery surface material, slipping is also a problem.

As Richard Hammond from Top Gear tells us in a recorded video, “keep your centers of gravity low and your coefficients of friction high.”

For several days I iterate and iterate on a design (nicknamed “Spatula Bot”) that tries to climb the steep hill by keeping my center of gravity extremely low.  It works, kind of; it’s extremely slow up the slope, far too slow to have any hope of running multiple laps during the 120 second competition period. 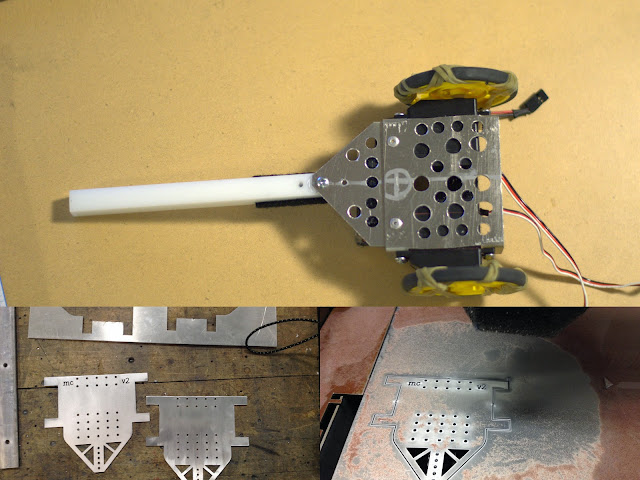 Notice that I’m making extensive use of waterjetting sheet metal to make precise, elegant parts; thanks to my friend Emma S. ’16 for her help waterjetting!  Amusingly, one of the robots on the final day is named “Flagrant Abuse of the Waterjet”, a title that would have been accurate for my robots.

Major credit goes to Josh B. ’16, as he designs the first robot capable of quickly climbing the top hill, using a rail gripper.  His design ends up strongly influencing the rest of the field’s hill climbers as well.  Here’s a CAD of one of my early successful prototypes utilizing a “ski gripper”, v2 of what eventually becomes my Ascensionist robot: 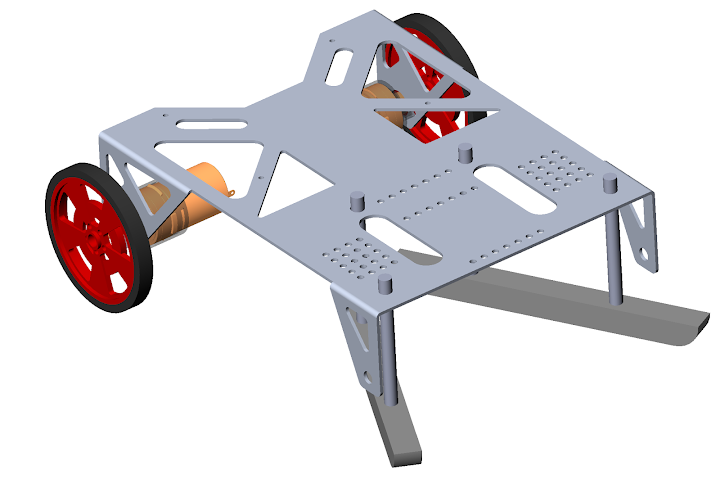 Around this time it also becomes apparent that controlling robots is a difficult task.

The RC controllers and Playstation controllers provided by 2.007 aren’t terribly reliable or easy to use.  I decide early on to use my iPhone and iPad to control my robots via OSC, a wireless protocol usually used by DJs to connect to sound synthesizers.  This has the advantage of letting me avoid the bottleneck of waiting for available RC controllers later in the semester.

With the ski gripper, ascending the top hill is trivial.  But what about getting down? 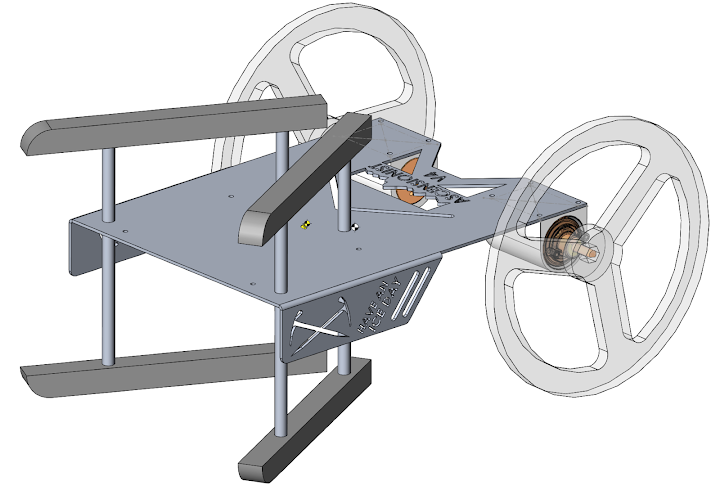 I briefly toy around with the idea of making a robot with large diameter wheels that drives equally well upside down, and build a few prototypes.  But the high speed motors I’m using don’t have enough torque to drive the large wheels up the top hill, and I decide to revert to a strategy of building roll bars: 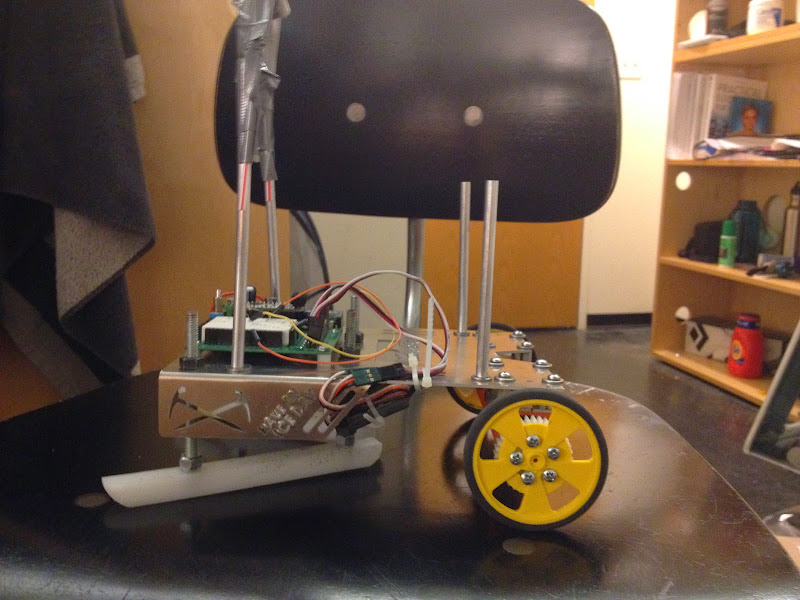 And this ends up being very similar to my final design; I also lower my entire chassis and use a 3D printed fixture to mount my motors.  Early on I discovered that tumbling down the top hill easily damages the delicate high speed motors I’m using.  My 3D printed mounts work well, and soon after lots of people are using them for their robots as well.

If there’s a wrong way to do 2.007, it’s to approach it as a cutthroat competition, attempting to hide “trade secrets” and to claim “ownership” of ideas.

As you can see from the propagation of Josh’s rail gripper idea and my 3D printed motor mounts, ideas spread fast in 2.007.  That’s the way it’s designed: even though you’re building your robot as an individual, especially for beginner builders it’s essential to collaborate and work with other people.  Forget about “helping the competition”; working together and seeing what designs work (and just as important, which designs don’t work) will save loads of time and lead to better robots for everyone.

Plus, these are your peers, who you’ll be working together with in 2.008, 2.009, and other team projects.  Don’t burn your bridges by being petty and accusing people of “stealing” your general ideas.  This ain’t Apple vs. Samsung.

Wait, there’s only 7 days until our robots are due???

I’ve got my hill climbing robot mostly done, but I also want to build a robot that pulls down the multiplier.  But there’s no way I’ll be able to design, fabricate, and test an additional robot in 1 week.  Is there?

One of the most underutilized resources in 2.007 (in my opinion) is a document called “How To Build Your Everything Really Really Fast“.  It’s written by Charles Guan, who now teaches the electric gokart special section of 2.007 (see, “it doesn’t have to be a robot”), and goes into lots of fast fabrication techniques. Robust robot designs generally require a lot of right angles; with traditional fabrication techniques this can involve lots of milling and drilling precise holes.  But using waterjetting and fastener techniques like “t-nuts”, you can save a lot of time and throw together fairly complicated robots quickly.

Here’s what that means for me: I’m able to design, fabricate, and assemble my multiplier bot in the span of 24 hours.

A task that would have seemed impossible for me at the beginning of the semester, but thanks to Tasker and Steve (the shop guys in charge of the waterjet and lasercutter) I’m able to do it.  Here’s the gearbox that eventually goes into the robot at the top of this page: 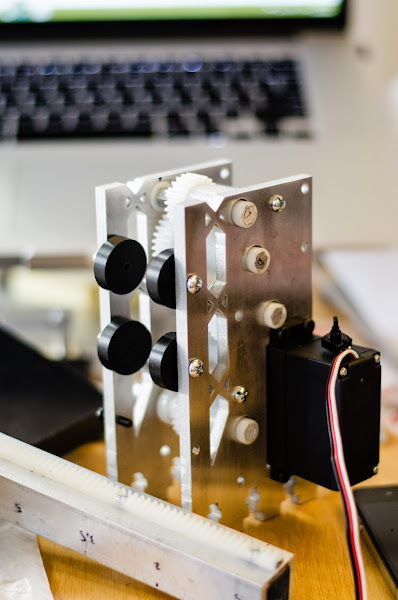 Note the extensive use of standoffs and t-nuts.  This makes my multiplier bot extremely modular; I’m able to completely disassemble and iterate my chassis and gearbox design in minutes, as opposed to hours.  Here’s the final design of my 2 robots: 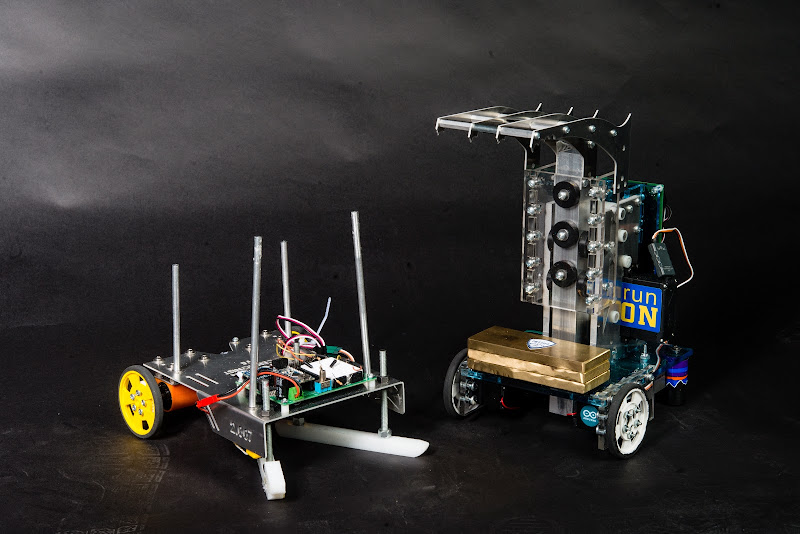 My hill climber robot scores enough points to seed me 2nd in the tournament (behind the aforementioned Josh), which means that I have a guaranteed spot on the final day of competition, and get to relax and watch the preliminaries.

Then competition day comes, and it’s totally awesome.  Besides the robots, there’s this “Engineering Petting Zoo” showcasing cool machines from companies and students.  Among the stuff featured: Tony Stewart’s NASCAR racecar, a Corvette, and electric gokarts built by the 2.007 alternate section.

But the robots are the main attraction of the day, of course.  I’m able to cruise through the first few rounds of competition despite my hill climber flipping over, thanks to my multiplier bot. 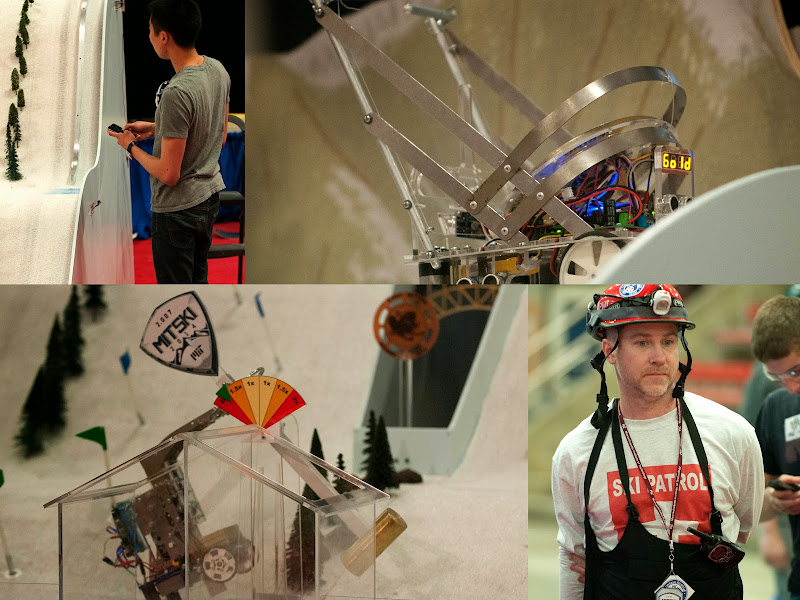 Clockwise from top left: me controlling my hill climber via iPhone, Josh’s hill climber + medal grabber bot, Danny (one of the lab instructors) and his Ski Patrol outfit, my multiplier bot in action.  Photo credits to Landon C. ’17.

But robustness is key, and one of my hill climber’s wheels pops off in the final 8 round.

I knew I should have listened to Chip and remembered to screw those wheels on.  An unfortunate time to learn that lesson, but I still have a lot of fun watching the final 4 duke it out.

The final match, between Josh B. ’16 and Clare Z. ’16 proves to be especially exciting.  Josh’s pair of autonomous robots has performed well all night and is capable of scoring well over 600 points – but Clare’s manually controlled robot is crucially super robust and reliable.  In a huge upset, Josh’s hill climber gets stuck in a rut, meaning his multiplier bot isn’t able to push the trophy, and Clare wins with a score of 312. 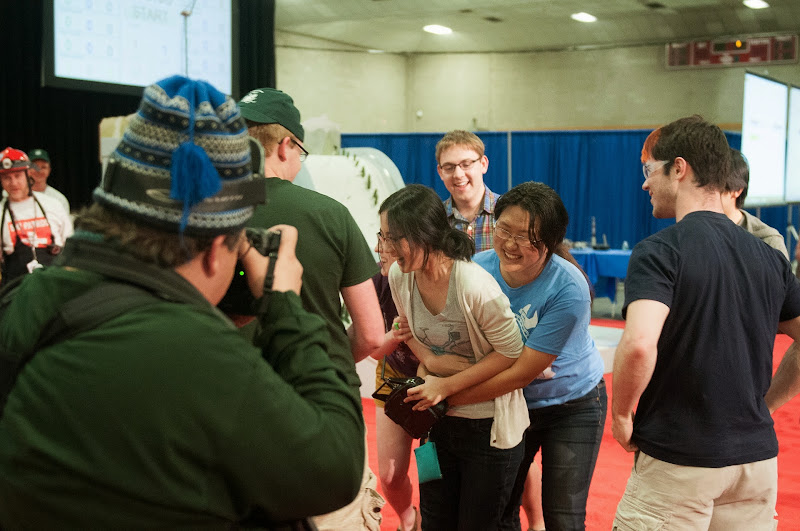 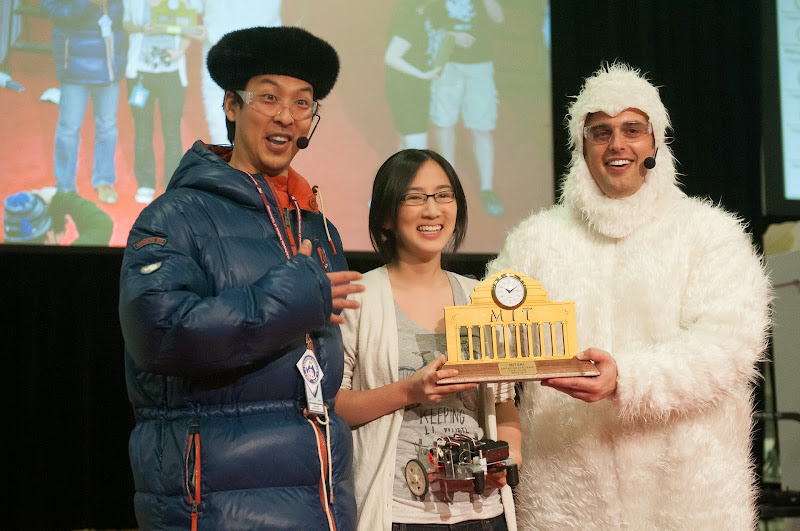