Today was apparently the MIT Undergraduate Association’s Fall Festival. I was unaware of this until I happened upon a food truck giving out large containers of ‘gourmet’ fries outside Kresge this afternoon, and saw a poster that said this food truck along with one giving out ‘gourmet’ grilled cheese would be here from 3-5pm today. Either 1) I am getting very desensitized to event emails because we get so many every day or 2) I am oblivious to the world around me. Both are valid options. Either way, I got some tasty free fries this afternoon.

Also, the Fall Festival means some performer/entertainers are invited to perform on campus. This year, the comedy duo was two of the actors from the HBO show Silicon Valley, which a couple friends and I conveniently watched this summer out of boredom/curiosity/etc. These were the posters plastered all around campus: 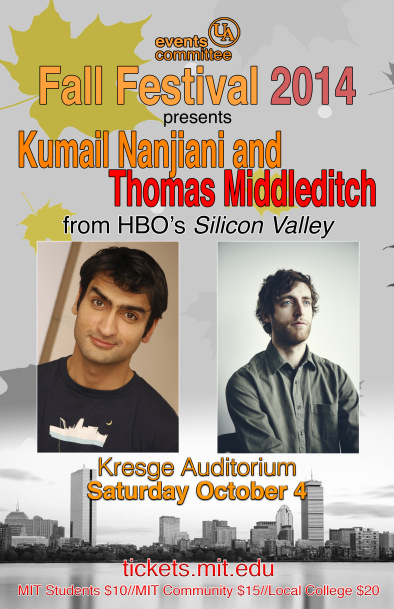 A couple of us bought tickets because why not see some TV actors irl and quite possibly be entertained? There’s really not much to lose.

The opening comedian was from ImprovBoston and she was spectacular. She had a very deadpan, Aubrey Plaza-like delivery, which pretty much falls right in line with my sense of humor. Then Thomas Middleditch and Kumail Nanjiani came on separately. They both had very different comedic styles, which is harder to see on camera but extremely clear when they write their own bits. I think at one point I was near-tears because of Kumail’s jokes about his parents trying to give him positive reactions/Amazon reviews for his Comedy Central show—there is something hilarious and universal about the way parents who didn’t speak English as their first language and grew up in different cultures try to (but ultimately don’t quite) express support/pride in their children. Speaking from experience.

At the end, they both came onstage and were answering questions about their lives and/or Silicon Valley, which pretty much gave me the perfect opening to ask the age-old admissions blogger question (thanks, Snively), “If your name was a unit of measurement, what would it be and why?”

Kumail thought I was referencing a bit he had done in the past (clearly, he was unintentionally prepared for such a question), and answered that the Kumail would be a scale of magnitude for the danger/force of a torpedo. A 5 Kumail torpedo would be a serious disaster, but a 1 Kumail torpedo maybe less so.

If you’re curious, my friend Rachel R. ’16 recorded me asking the question and their responses (she’s actually the best) so you can listen and watch for yourselves, if you’re curious! She also should get credit for pushing me to ask the question in the first place, because I was definitely too awkward to raise my hand and shout it out by myself (but she made sure my hand stayed up and in sight so they just HAD to call on me eventually… true friendship right there, folks.)