Feeling Good by Vincent A. '17

I’m in my room, clacking away on my laptop, my fingers slowly defrosting, bits of ice forced into my intestines (by Cambridge’s spooky weather) slowly melting, and I feel pretty good. It’s been a while I typed up something that wasn’t a p-set or a study paper, a consequence of the past three weeks sapping so much time.

The barrage of classes, problem-sets and exams all culminated in two midterms this past Monday, alongside a p-set I turned in one Ed Sheeran song before the deadline. Needless to say, I spent a large amount of time yesterday going through way too many equations, free-body diagrams and cancer-modeling pictures, splayed in different positions. Sometimes, I work sprawled on my bed, usually when I’m reading. Mostly, I hunch over a “makeshift” table—what kind of makeshift, you definitely don’t want to know. A few times, I sit on the floor and try to think things through. For rather difficult problems, sitting seems kind of hard to do while thinking of solutions, so I like to walk around in small circles, muttering to myself, twirling my fingers in the air, undoubtedly looking insane to any invisible observers.

There are these spurts of time that feel like a great, cool intake of air after you’ve held your breath for way too long, spurts that come typically after curling the final integral sign onto the last problem of a p-set or after drawing a sad smiley on the final page of a difficult midterm and hoping you get credit for the dimples. And suddenly, you’re kind of…free? Only for a while, but yes, it feels like temporary freedom, to just take a breath and relax without feeling too guilty.

This is quite the rant, and I guess it’s one born of euphoria. I’m done with midterms for the semester. No more exams until the Finals roll around in the middle of next month.

There are still p-sets though, but we can forget about those for now.

I had just finished a calculus midterm exam…and it felt odd because that was the first time in MIT I had completed an exam with several minutes to spare. This wasn’t why I felt good though. I turned in my exam paper and headed to my dorm. On arrival, I saw my name on the big screen in the Foo Lounge of Random Hall, the screen that indicates the presence of mail. I wasn’t expecting a package, so I was curious. My first thought had been something along the lines that my international secret government spy cover had been blown, and ninjas had left some device of doom that…oh, oh, it’s just a basket.

But when I took the small wrapped basket from the friendly front desk person, I realized it wasn’t just a basket. 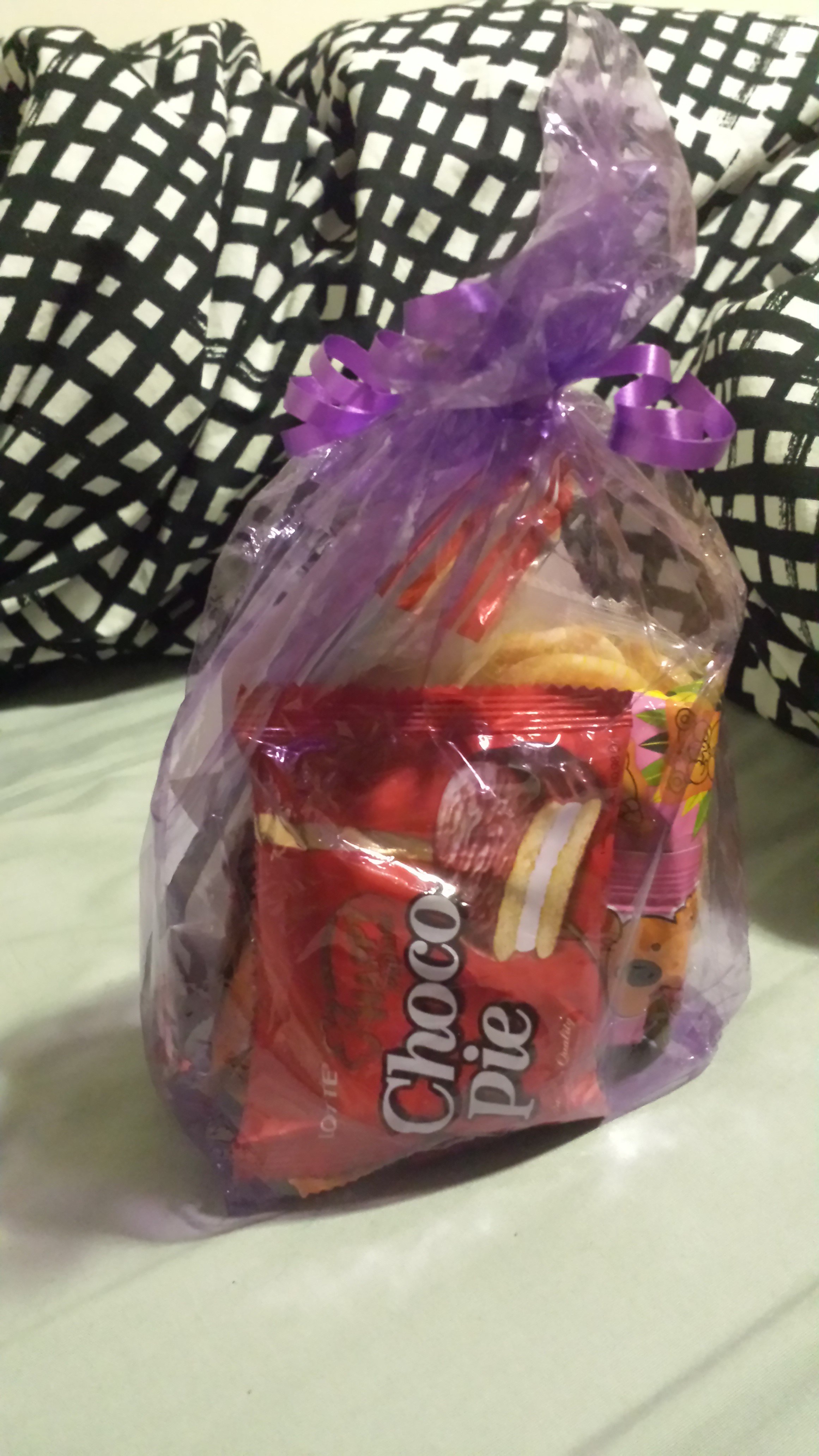 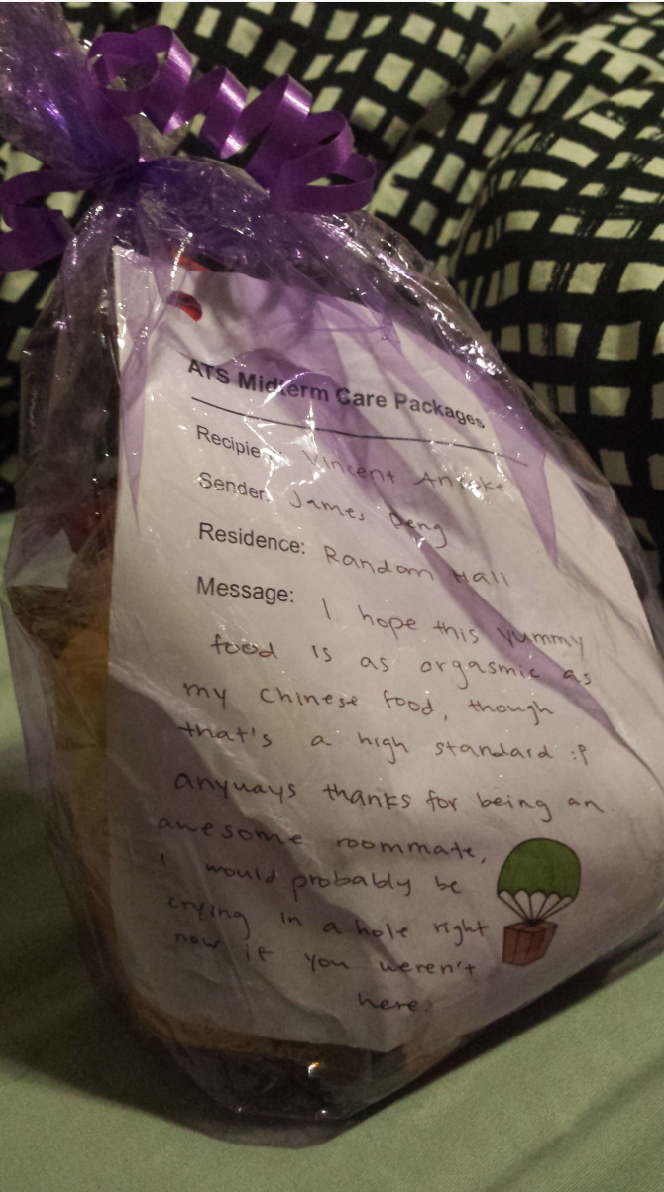 It was full of candy, chocolate-covered pretzel sticks, gummy bears, crackers, and a note from my roommate, saying in the last few lines: “thanks for being an awesome roommate; I would probably be crying in a hole right now if you weren’t here.”

Me? Awesome? Clumsy, sure, but awesome? Needless to say, I stood there, smiling as widely as any person could, the ends of my mouth probably whipping past my ears in a curl. It was both unexpected and delightful, and I was grateful for it.

The Cambridge Weather, to which we shall now address as Evil, saw to it that my happiness was as short-lived as possible, bringing howling winds and a spirit-drenching cold that night and the following day. The only upside to that was being able to breathe out and see white puffs of air float out like ghosts, while wondering if that was movie-esque (yes, that word is made up). However, even with multiple layers of clothing—sometimes in questionable combinations of jackets, sweaters and hoodies—I still felt like I was navigating the deepest parts of a gigantic refrigerator.

—
Over the rest of the weekend, I watched the MIT Chorallaries astound a large crowd with incredible singing, explored a bit of Cambridge, felt my dorm literally shake (construction nearby, old building, long story), spammed a mailing list with nothing but “eom”, ran around a maze of students that had brought energy, enthusiasm and cameras for the Splash weekend, and eventually got around to studying for my two midterms.

Physics went fine; Biology went a whole lot better than the last time, although one of the questions about single nucleotide polymorphism chips, vaguely resembling a computer-science/advanced-combinatorics hybrid had me stumped. I have since then—by which I mean, a few seconds ago—found out the answers, and have a good mind to kick myself in the head.

7.012—Intro Bio—is definitely a very challenging intro GIR; it also has its moments. Recently, a lot of it. Beyond learning about the cold, hard facts of vesicular microsomes and transcription factors, we sometimes delve into the human workings behind those facts, the little strokes of luck that brought about certain major discoveries, the simple experiments that paved way for larger, more complex ones…and I recently got a sense of something, from one of the classes in which Eric Lander tied in everything we had learned thus far to developing drugs for a certain heart disease. I got the sense of how beyond the 1400 pages of our textbook and the words uttered in class, beyond the teeth-kicking problem sets, everything we had learned in 7.012 this semester connected like meshing gears to hold up the fabric of the world. It felt like if I really thought about these things, genomic variation, nucleotide mutations, the workings of immunology, I could see them taking on bigger forms, yielding impacts.

I’m in my first semester at MIT, and I’ve struggled a lot with Biology, but I’ve also been amazed by it, and understand that over the course of the upcoming semesters, MIT is going to split my mind open. My vague appreciation of how the things we learn in class can actually translate into changing the world in some not-at-all-over-idealized way is probably going to bloom. And it feels like…it just feels like MIT is preparing us to go out there and make those impacts. I’ve never really sat down and thought to myself, “I can make a huge difference…” because on the surface, that might sound silly and nothing more than proverbial, but in 7.012, I realize it isn’t. Serendipity would play a role somewhere; a lot of it would have to come from a great amount of hard work, but MIT saw something in me, and in everyone else that calls the Institute home, and MIT said, “You can do it.” However, MIT also likely sees it in people that may never call the Institute home.

The first round of admissions decisions will be out soon, and the committee is going carefully through thousands of applications, digging themselves into your lives. Hopefully, they’ll come to understand the things that get you excited, the little segments of your lives that blend like jigsaw puzzles to define you. They’ll have to make extremely tough decisions, but regardless of the outcome, there’s a hope and energy that echoed in the pages—or pdf files—of your applications, one that shouldn’t ultimately hinge on a letter of acceptance or rejection.

Very soon, in a blog post or two, I’m going to talk about the journey that led me to MIT, about the events that took place during the gap year that could easily have had me elsewhere. And I think the one thing I understood from reflecting on that now is this—I had things I had woven myself so deeply around that they were a part of me, ideas or activities that got me bristling, bubbling, overwhelmed. Those things were a big part of me when I sent in my application, and the outcome of the admissions committee’s decision existed totally independent of how strongly I felt and still feel about them.

MIT is preparing everyone here to make a palpable difference in the world, but what exactly does this mean? The most important tools we have are our zeals, our enthusiasms, our brimming ideas, clashing, mingling, as the resources are set forth before us, but ultimately, anything we do hinges far more on who we are—before we applied here, after we got our letters of acceptance and rejection from wherever we applied—and on having the sense that, because we’ll still love science experiments, or art, or the bliss of music, or Ultimate Frisbee regardless of anything, we’ll be able to use them as a platform for development wherever we are.

The stories I learn about in 7.012, of Mendel’s experiment with the peas, of the sleepless night leading to Sturtevant’s conception of a genetic map, of the great role luck played in James Gusella’s polymorphism idea, were ultimately more of tales of inquiry and perseverance paying off than of location. It’s important to never lose track of the things that make you happy, and of the mindset that you have the potential to forge great things out of them.
—
Well, I’m hungry right now, so I’ll probably go scavenge the kitchen or hope for a free-food e-mail to land in my inbox. I get quite a number of free-food e-mails on an almost daily basis, and in fact, I think I’ll do an e-mail search right now.

You see how there were four free-food e-mails this past Sunday? And one on Saturday and three on Thursday? Hopefully, there’ll be one more tonight. My senses are attuned to these kinds of e-mails like a ravenously roving satellite dish.
—
Well, it’s been a pretty good day (he says for the millionth time). I had to stay up really late studying and didn’t get much sleep, but I took a brief power nap a few hours ago, and since then, I’ve felt great. It’s weird. I have no more work due this week. There’s a calculus problem-set for next week and a brief reading for my philosophy class, but that’s relatively light, and it feels kind of weird, kind of amazing.

It’s also Thanksgiving this Thursday, but I have very little to say about that, since I’m an international student, and it’s not really a thing in Nigeria. Regardless, I definitely have a lot to be thankful for—my roommate, my friends, my family, my Alpha Delta Phi brothers, the people close to me, my sense of happiness right now, the eighty-five or so Taylor Swift songs on my phone, the idea that I can always whip out words to construct my thoughts and emotions and feel good doing that. And of course, the fact that MIT is giving us two days off classes.

I’ll probably spend a good portion of this week writing stories. You can read a short one I wrote a few weeks ago here, although it’s fairly gory. I hope you guys have an amazing Thanksgiving this week, and have the chance to reflect on the things that make you bloom, the people that make you happy, the life you get to live now, and be thankful for them. For everything.

Time does tick after all.