my parents tried to replace me with literal birds

In April of 2018, I left home for a few days to attend CPW,⁠01 Campus Preview Weekend MIT’s admitted student weekend. My parents and my younger sister⁠02 She's now about to be a first-year at Northeastern University! stayed home on Long Island while I took the train to Boston with a friend from my high school. The days I spent at CPW felt intense – MIT is a unique place and my sheltered high school self was not ready for it.⁠03 And I came anyway. I figured college is for personal growth as much as it is for academic growth and fun.

The intensity of the weekend didn’t stop when CPW was over. First, I almost missed my train back home. Then, when I did finally get home, I was in for a surprise. Although I was only away for 3.5 days, in that time my parents managed to:

No one gave me any indication that this was happening while I was at CPW. When I got home, before I even put down my suitcase, I was greeted at the door by these four adorable chicks: 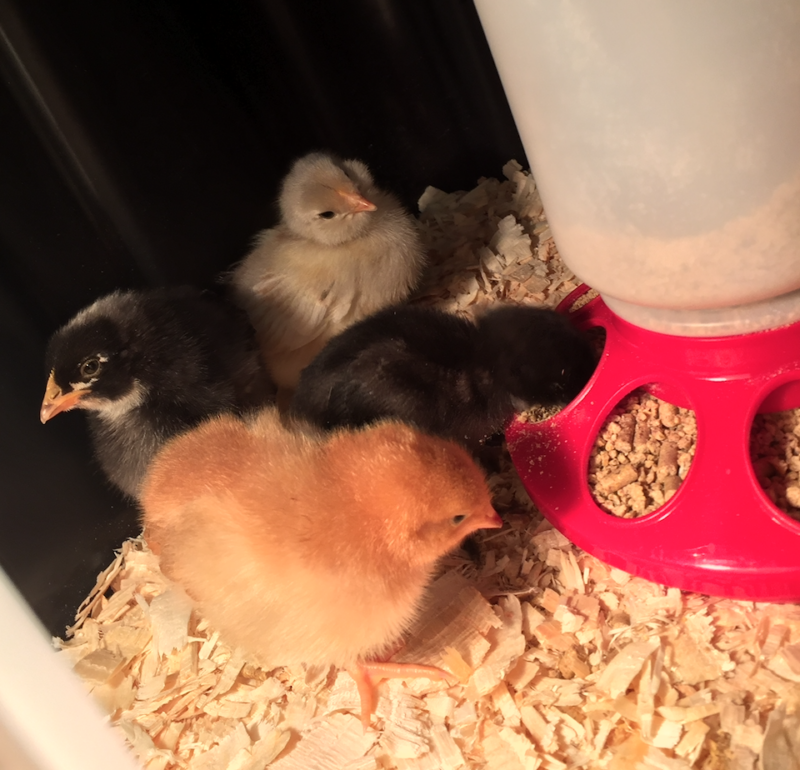 Though it was a very impulsive decision, both of my parents had raised chickens before coming to America, so the chicks were in experienced hands. We now have a total of 12 chickens (we got eight more chicks over the last two years).

After getting the chicks, my parents set to work building a pretty massive chicken coop in the wooded area of our backyard. My parents have always liked building stuff, especially with wood, so it only took them a few days to build the entire coop. My main contribution was painting a cute sign to hang on the side of the coop.

The structure they built actually consists of both a run and a coop. The run is the big screen-enclosed outdoor space, while the coop is the smaller wooden indoor space. The chickens sleep and lay eggs in the coop and then hang out in the run during the day. We generally let them out to roam in a large (but enclosed) section of the yard during the day, too. 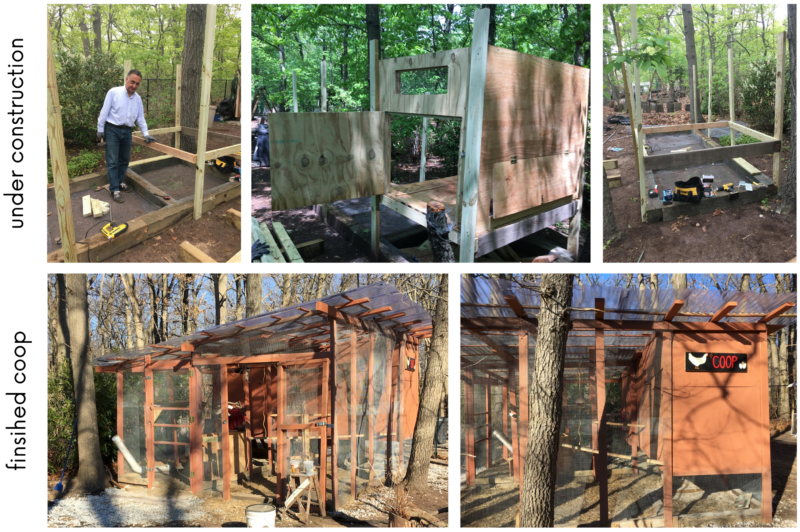 i made the black “COOP” sign on the bottom right

From chicks to hens

Though I never expected to enjoy raising chickens, they were too cute not to love. The chicks hopped around, made little chirping noises, and were incredibly soft and fluffy. We kept them in a box with a heat lamp for a few days while the coop was being built.

All of the chicks were different breeds. As they grew, differences in their anatomy emerged as the fluff covering their bodies turned into more defined feathers, differing across chickens in their colors, patterns, and structures. Here are the chicks are a few weeks later: 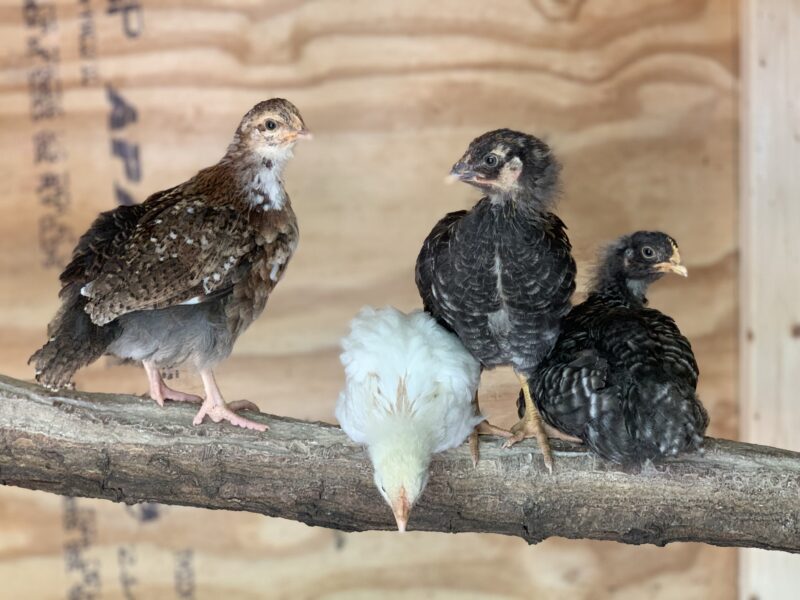 even chickens have awkward teen years

As the first four chickens grew into hens, my parents went back to the farm to get another set of four chicks. Once all eight of them were living together the coop, we observed some some tension between the two generations. For a few weeks, the first, larger set of hens acted aggressively towards the second, smaller set of hens. For example, if we left out two piles of corn for them to eat, each generation would self-segregate to eat from one pile. After a minute, the bigger hens would try to steal the second corn pile from the smaller hens. Interestingly, if we stood next to the run and watched them, they wouldn’t do this – almost like they knew it was wrong. This tension faded as both groups reached adulthood. We witnessed the same dynamics again when a third set of four chicks was introduced to the coop.

After their awkward and rather ugly teenage years, the chickens emerged as beautiful hens. Some are friendlier than others and we can pick them up while others will slap you in the face with their wing if you try to touch them.⁠04 Personal experience :( All of them love my dad the most because he’s the one who feeds them. They eat store-bought chicken feed, a variety of scraps from our kitchen, and various bugs and plants they forage from the yard. 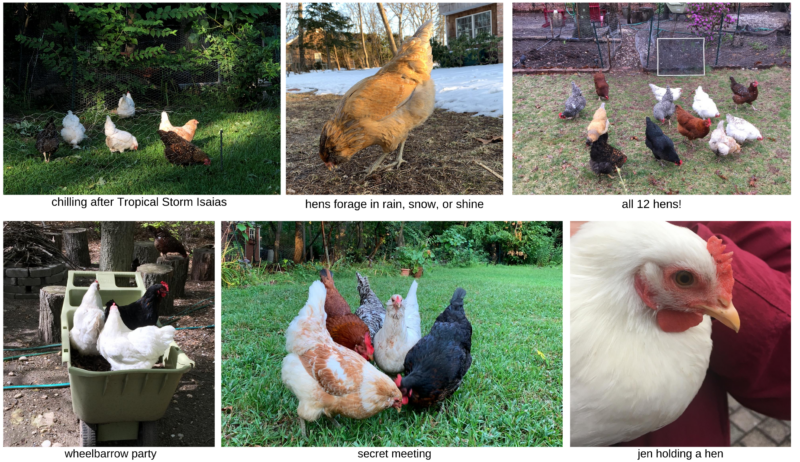 The biggest perk of having a farm-animal-pet is that we get dozens of fresh eggs a week. We made nests inside the coop, and the chickens sort of naturally just know to lay their eggs there. From the spring to the fall, each chicken lays about 5 eggs per week. Five dozen eggs per week is too many eggs for my family to eat, so we regularly either sell or give away eggs to our neighbors, friends, and family.

One cool thing about having fresh eggs is that we don’t need to refrigerate them. Eggs in America are refrigerated because they’re required to be washed with soap and hot water before being sold. This process removes a protective coating from the egg that would ordinarily keep bacteria out. If we do need to wash an egg for some reason, we can refrigerate it, but otherwise we can just keep them in a cool place.

Some people ask me questions along the lines of, “how long would it take for the egg to hatch?” or “how do you know there’s no baby in the eggs?” The answer is simple: we do not have a rooster. There is no chance of any of these eggs hatching, ever, because they are all unfertilized.

All in all, having chickens has been a pretty cool experience. My parents have a very full nest right now, with both me and my sister being home alongside their twelve hens. Pretty soon, though, my sister and I will both be moving out.

When I first moved away from home, I didn’t really think my parents would miss me (and I honestly didn’t really care even if they did). I was just really excited to go live at MIT and have a taste of independence. After returning home and living with them again, I started thinking about how little time I would have had with them after moving out, if COVID-19 never happened.

Even though it’s been rough moving back home and losing a bunch of the freedoms that make college so exhilarating, I am extremely grateful to have had many more days to spend with my parents. Looking forward, knowing that I only have around 1,000 more days to spend with them is helpful as I try to decide where to go after MIT. Hopefully I won’t always be too far from the nest.