Last Thursday, MIT Medical had a walk-in clinic at Walker, where MIT community members could walk in and get a flu shot.

I was initially a bit reluctant to get the flu shot, because needles and injections terrify me, you know? I hated going to the doctor to get vaccines. I know they’re good for me, sure. I know how necessary they are. But I was really scared to get the shot because I’ve had really bad experiences with injections in the past.

A bunch of people in our hall told me to get the shot. It’s really quick, they said. The person giving me the shot last year even talked to me throughout so that I was distracted, they said. It’s not that bad.

Well, it really wasn’t. During my lunch break, I went to Walker, and three minutes later, I got my flu shot.

And I was awed. The flu shot clinic was one of the coolest things I’ve seen since I got here, and that’s high praise when you’re studying somewhere as cool as MIT.

Let me explain why. Make a guess for how many people got their flu shots that day. The clinic was held for ten hours. How many? A thousand? Two thousand? Five thousand? For reference, in 2017 they had 7,500 in a single day, and in 2018 they had around 4,000.

This year, MIT Medical gave out numbered stickers for each person they shot, going from 00001 and counting up. One of my friends on the floor I live in stuck his sticker on his door: 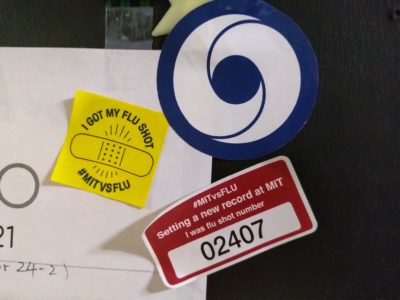 The yellow sticker here was last year’s sticker. The red sticker was this year’s, and his number was 2,407. That means at least two thousand people got a flu shot.

Later that day, during my 8.022 (Physics II) class, our professor was wearing his sticker. It was numbered somewhere in the three thousands. He reminded all of us to get our flu shots after the class if we haven’t yet. 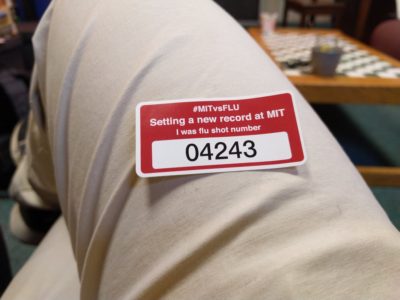 The hallway on our floor has a door, and behind it were some more stickers that some of our residents put up: 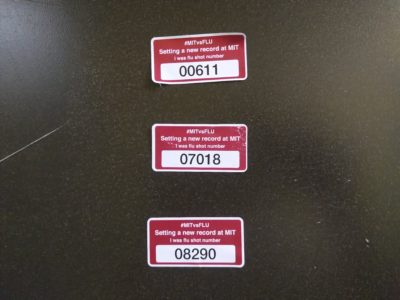 Seven thousand. Eight thousand. In fact, the last number they gave out was 9,378.

Think about it. The clinic was open from 8 AM to 6 PM. That’s ten hours. And over nine thousand people got the flu shot. That’s about one shot every four seconds. 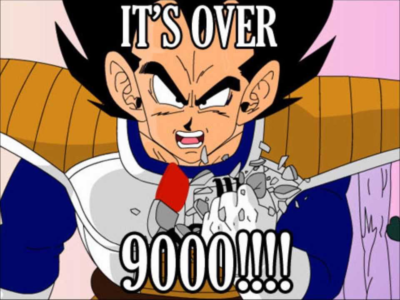 You might even argue that maybe they skipped some numbers, maybe due to human error. True, but it’s still pretty likely at least nine thousand people were given shots that day. You might argue that there’s a lot of staff. Then consider it from the other perspective: most of the people I knew got in and went out in as fast as three minutes. The longest wait time I heard from my friends was around ten minutes, almost all of which was waiting in line.

The problem isn’t hard to state. How do you give flu shots to as many people as possible as fast as possible? I’m no expert, but I feel like their success was a combination of a really well-planned system and effective publicity.

Here’s a sketch of how I remember the clinic to look like. It’s probably inaccurate, it’s missing a lot of details, but it’s already too complicated so I’m just going to give this: 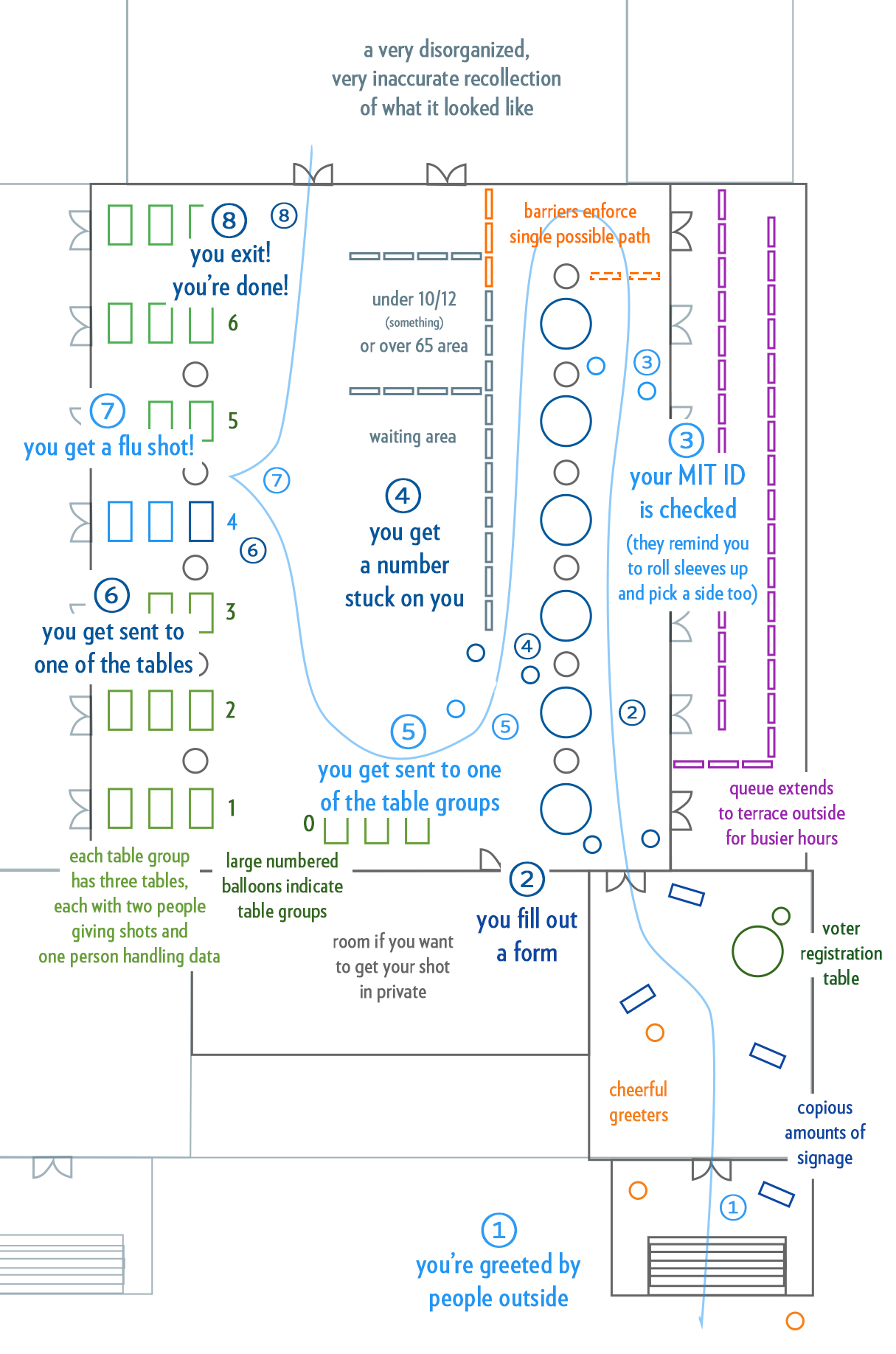 To follow the picture, start from the bottom⁠01 perhaps the graphic is not as well-designed as the flu shot clinic and continue upward. The largest contribution to the speed is probably the queueing system. The entire thing is a single queue up until step 5 in the above diagram, where you get sent to line up in front of one of the roughly eight table groups.

Each table group had three tables. You then get sent to one of the tables, and someone types up your form. There are two people giving shots at each table, and as soon as one of them’s done, you sit down and get your shot.

The queueing system felt so organized. In the beginning, it’s a quick single file. It’s not like a line for a rollercoaster, which moved in bursts. This line was constantly moving, which helped make the clinic feel fast. There also weren’t any bottlenecks, because as soon as you get assigned to a table group, you’ll get a shot soon after.

Another cool thing about it is all the little details that make the experience so smooth. For example, when I came to the clinic, one of staff outside was shouting flu shot season! in a cheerful, singsong voice. That made me feel pretty welcomed. A sign also indicated how short the wait time was, which helped convince me to line up: 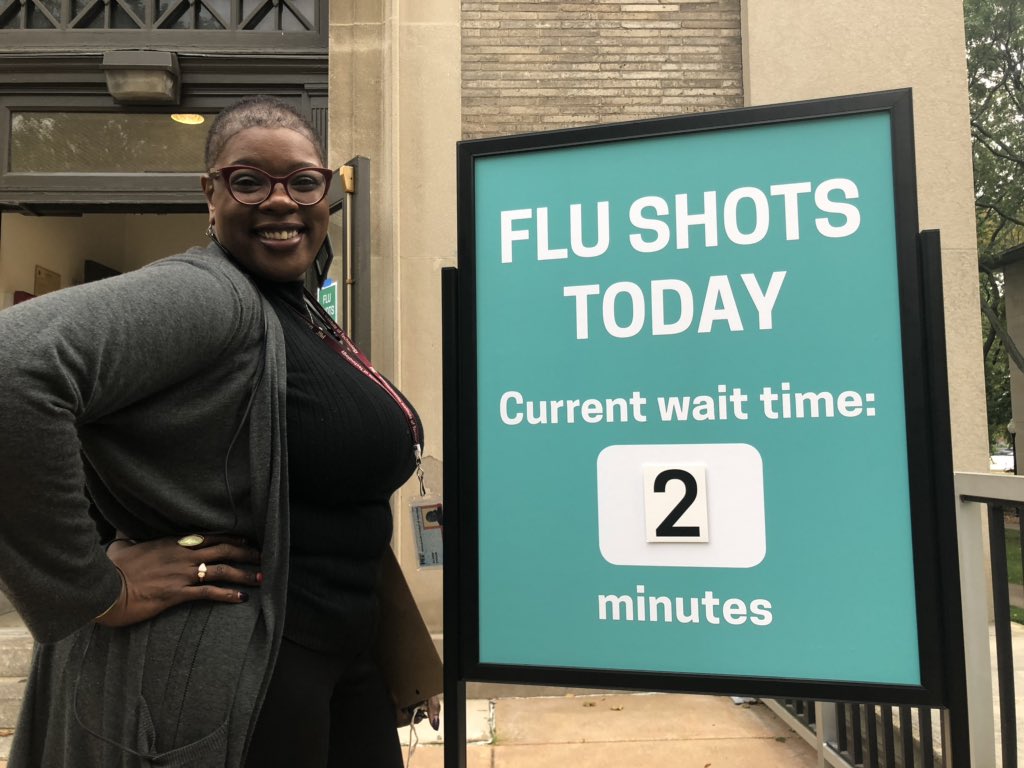 There are copious amounts of signs and posters all the way through the route. There were also a lot of barriers set up, so there was really only one way to go throughout the whole process. The table groups were numbered with big balloons rather than tiny paper signs, so they were easy to spot. It felt very intuitive.

The publicity is also amazing. The framing of the event was brilliant: help us break a new record. Borrowing language from one of my favorite books, Made to Stick, it’s a very sticky tagline. Putting numbers on the stickers was a brilliant move as well; it made me feel like I was contributing to the record. It’s the kind of campaign that might not succeed elsewhere, but MIT Medical knew their audience. And it worked.

And that’s not even the entire picture. It’s so cool you could write a whole paper about it. In fact, one of the upperclassmen on our floor did write a paper on last year’s flu clinic, for one of her classes last year.

I think my point wasn’t just to hype about how mind-bogglingly efficient the flu shot clinic is, or the ingenious publicity behind it, but the fact that people thought about this. The people at MIT Medical didn’t only want to give flu shots. They wanted to give it in the most efficient way possible, to as many people as possible. They’re committed to make flu shots better and better with each year.

That’s the kind of commitment you’ll find here at MIT, when people work to optimize something as seemingly trivial as flu shots. Sure, there are a lot of things here that could be better. A lot of things just downright suck. But there’s glints of effective, thought-out design everywhere, from campus tours, to signage, to hacking. It gives me hope that the things that suck will get better.

If you missed the flu shot clinic last Thursday, they’re doing one more on Monday, October 21, from 2 PM to 6 PM at the Student Center. From October 22 to November 25, you can schedule an appointment for a shot at MIT Medical by calling their flu line 617-253-486.