there's graphs in this one

On Jan 3rd, Forbes published their annual list of the 30 Under 30 of 2017. For six years now, Forbes has put out lists of the top 30 innovators under the age of 30 for each of 15-20 industry categories. The Tech and Social Entrepreneurship categories have included well-known names, like Mark Zuckerberg, Evan Spiegel, and Malala Yousafzai. The Entertainment, Music, and Sports categories have included even more famous names, from Bruno Mars to Jennifer Lawrence to Lebron James to Ronda Rousey. 600 winners a year may seem like a lot, but according to Forbes there are 15,000 nominations per year to choose from. That’s a 4% acceptance rate, less than MIT’s 7.9% acceptance rate!

According to these articles, within the past three years, there have been 89 30 Under 30 MIT alumni. I was interested in knowing how what industries Forbes thinks MIT is innovating the most, so I marked down which category each alum was in. (I’m taking Stats this semester so I should get some practice making graphs.) 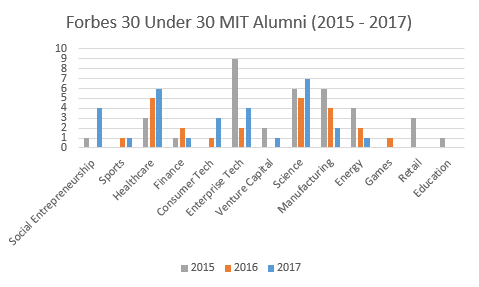 Not surprisingly, it looks like the bulk of awardees are in science, enterprise tech, and healthcare, followed by manufacturing and energy. It’s cool to see winners in the other categories, showing that MIT alumni can be leaders in non-STEM fields as well. Two of the three winners in the Retail category of 2015 are the Ministry of Supply founders, a company that makes wrinkle-free, sweat-resistant dress shirts with the same technology used in NASA space suits. The MIT alum in Education is the founder of eduCanon (now known as PlayPosit), which helps teachers create interactive video lessons. The Sports alum of 2017 is the founder of Humon, a wearable that measures oxygen levels during exercise for athletes and the alum of 2015 is the Director of Data at Second Spectrum, which is used by almost all NBA championship contenders.

I was interested in seeing the breakdowns of the category winners of years before 2015, but I couldn’t find any readily available records. So I went through the full list of 30 Under 30 winners from 2012, 2013, and 2014, looking for any more MIT alums. 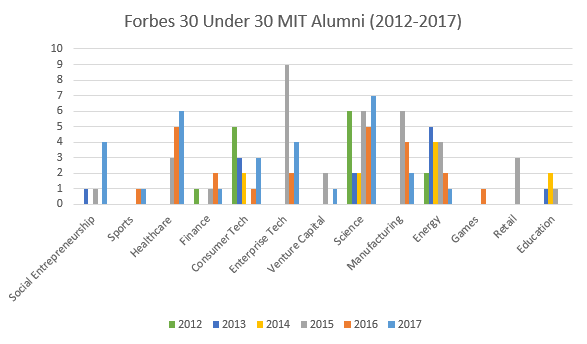 There was more of a recognition of energy achievements in the years before 2015 but the science category still reigns supreme. 2012-2014 also added more finance, consumer tech, and education alums to the list. Interestingly, no more sports, games, or retail alumni were recognized before 2015, but it might be possible I missed an alum or two somewhere. 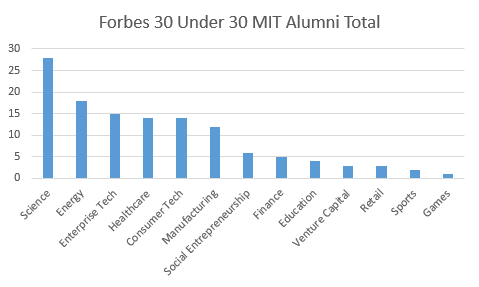 So over the past six years as a whole, MIT alumni’s contributions to science and energy have been the most recognized by Forbes, followed by enterprise tech, consumer tech and healthcare, and then manufacturing. In the Forbes article, MIT was listed as one of the most attended universities of the 2017 recipients, alongside Harvard, New York University, Stanford, and University of Pennsylvania. Obviously, awards are subjective, and MIT is making huge advancements in areas other than the ones Forbes listed. But I do think that the 30 Under 30 lists each year manage to capture an interesting sample of the population. Looking through the lists of previous years, I really got a sense of what technology trends were being valued, and which ones continued growing while others died out. It’s exciting to think about who will do interesting things in 2017 and end up on the 30 Under 30 list for 2018.

Shout out to John Urschel, a 2017 30 Under 30 recipient in the Science category, who is both a mathematics MIT PhD student AND a Guard for the Baltimore Ravens. Stereotypes be damned.

Also shout out to Taylor Freeman, Cliff Weitzman, and Steve Anastos, who are all friends I made in 2016 that were awarded this year’s 30 Under 30. You guys are rocking it!