okay. i’m super behind on this and that’s my bad. but…

when you return to/arrive on campus, you should consider getting a bike. it’s so worth it. i lived in Burton-Conner, the fourth dorm down Dorm Row, so i never thought i needed to bike anywhere, but y’all, i was wrong. SO wrong. 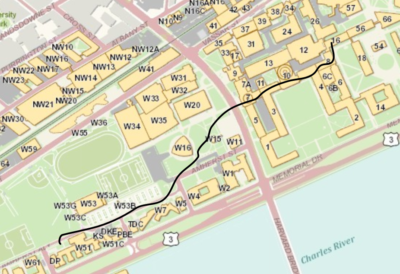 the long and arduous journey from burton conner to building 16

with a bike, that’s a four-minute commute tops. i could’ve left around 10 and gotten to class in time!!

what about the infamous 15-minute trek from West Campus to Walker Memorial, where a lot of dance practices are held? or the ~20-minute one to the Martin Trust Center (MTC), which is my go-to place to study?⁠02 see: free granola bars, ramen, coffee, and quiet study rooms

well, with a bike, you can speed down Memorial Drive to Walker in maybe three minutes, and get to MTC in under five. WILD.

this is so revolutionary for me…i didn’t bring my bike down from my house in New Hampshire the whole year because i thought it would be a huge hassle, but all it entailed was shoving my bike in a car and driving down to Cambridge. and the benefits are astounding!!

i’m currently living near the MIT Museum, which is a couple of minutes down Mass Ave. from Lobby 7. it’s 10 minutes by foot, but only 2-3 minutes by bike. crazy! all those times during the school year when i wouldn’t want to walk to places like Roxy’s⁠03 i would die for a grilled cheese because of the distance, or when i’d UBER to Trader Joe’s when i needed groceries, seem ridiculous now.

okay, so we don’t know what our next academic year will look like, so this rant about how useful bikes are is…untimely, at the very least. however, i can say that i am excited to experience whatever semblance of a school year we get with my ~beautiful new bike~ in hand.

reasons why i didn’t want to get a bike DEBUNKED:

you should definitely consider getting a bike if…

aaaaand that’s my psa. catch me biking to frat parties whenever that’s a thing again ✌️ (haha jk would literally never do that)