As promised, an awesome guest entry – written by the wonderful Stephanie Lin. Read on!

My name is Stephanie, but mostly I go by stephlin, steph or “yoooo.” I’m currently finishing up my senior year in Course 7 (which is awesome! Everyone should study biology!!) with a minor in Applied International Studies and concentration in Spanish. I was a beekeeper/researcher for a summer in high school (obligatory fun fact), really love parentheses and tend to write/talk too much (as you will soon see…). I’m incredibly excited to be going to Oxford next year via the Rhodes Scholarship, and Hamsika asked me to write some juicy new details about the application experience. Here goes:

Prologue (sounds so official, right?).
I made the decision to apply for the Rhodes last year (junior spring). Long story short[er], I wanted to be a physician but also wanted to study the humanities side of medicine before jumping from Biology at MIT to Physiology in medical school (I eventually want to work in public health and infectious disease. See, I told you – long story). Oxford has some really interesting programs and a very different style of learning from the US, so I thought this would be a great opportunity to gain a different perspective and meet awesome people. So over the summer as I was filling out medical school applications, I was also working on:

The Rhodes Application – you know the drill.
A 1,000 word personal statement, transcript, 2-page resume and between 6-8 letters of recommendation. What a monster, right? I submitted everything in early September to the MIT Distinguished Fellowships Office, which had interviews and chose a group of students to give Institutional Endorsements to. Everything, including the endorsement, was shipped off to one of 16 Districts in early October. And then I waited.

The Interview – Whoa there. Whoa.
In late-ish October, each District emails or calls its Finalists to let us know that we’ve received invitations to interview in mid-November. I was sitting in 7.20 (Human Physiology) when my email came, so I had to refrain from making a ruckus. But I was ridiculously excited…and about 30 seconds later, very nervous. The Rhodes Interviews are notoriously difficult; questions can range from challenges to weaknesses to baseball, poets from your ethnicity, politics, ethics, class from freshman year, classes from sophomore year and yes, even that one class you always slept through senior year. I spent weeks working with the Fellowships office, faculty and friends to talk through questions. I think this preparation was one of the most valuable parts of the process – because it forced me to think critically about my aspirations and values, and learn to articulate them properly – but also the most grueling.

The Interview – Fish and cocktail parties.
And then I flew to California. The actual interviews take place on Saturday, but all Finalists attend the cocktail party on Friday night in order to meet each other and the interviewers. I thought it would be terrifying; the bios of the previous Scholars online are absolutely amazing and intimidating. But this is what happened:

Fun, right? The other applicants and interviewers were all super-accomplished people, but they were also very warm and friendly, and genuinely interested in learning more about me. The cocktail party made the interview process less nerve-wracking and much, much more fun (also, they fed us tacos with really good guacamole. that makes everything better).

The Interview – The Interview.
On Saturday morning all 10 Finalists from the LA region were interviewed in half-hour slots that we’d drawn the night before. After chatting with the receptionist and another applicant for a while, I was called into the room and led to the head of a very long and intimidating table:

But the interview also ended up being more fun than expected (haha this is a trend), though the questions were still challenging. I was asked about my favorite class from freshman year, an awesome class from sophomore year, lots about medicine and medical ethics (which made for very interesting conversation), art in Boston and Barcelona (where I’d worked on an internship), biology and a host of other topics. No questions on baseball, thank goodness. I walked out smiling then, nanoseconds after the door closed, began psychoanalyzing every statement I’d made. Which leads us to…

The Longest 4 hours of my life.
The last fun thing about the Rhodes interviews is that they tell you the same day whether you got the scholarship or not. After my interview I wandered around downtown LA for a while looking for food (a very common theme in my life. the food, not the LA) and then went back to the hotel lobby to chill for a few hours until the call-backs. To distract myself, I went to the nearby CVS and bought one of the DVD’s that was on sale. The choice was a hard one – the entire time I was thinking, “what if they call me back for a second interview and ask me what I did all afternoon? Maybe I should watch an inspirational movie. A documentary. Something in Spanish. Something deep.”

I eventually picked up “Happy Feet.” Penguins are good for the soul! 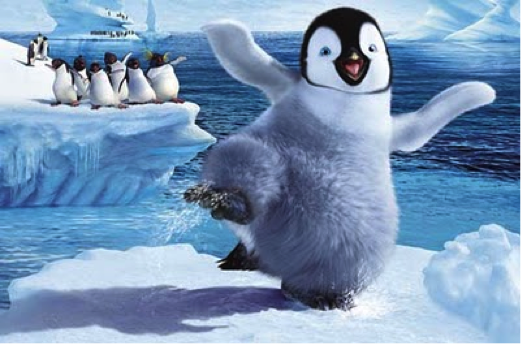 Finally, I joined all the other interviewees back at the site to wait. This was actually really cool because we got to chat with one another and play a mean game of “Go Fish” while the judges sat in the room next door talking about us. Twice, the chair of the committee came in to call someone back out to re-interview, and my heart would stop (along with everyone else’s, I’m sure) for just a second.

After 2.5 hours they came back to make the announcement, lining up in a very intimidating row. As they called the first name my heart was pounding in my ears.

And then they called my name and I sat there with a really silly look on my face. I don’t remember much of the next few hours; I’m pretty sure my vocabulary was limited to “Thank you,” “wow” and “[silly grin].” Not the most eloquent moment of my life, but I think that’s okay.

The end. Plus the stuff that’s missing.

And there you have it.

But I’m missing a huge chunk – you see, this has been MY snapshot of the last few months, but there are so many other people who have helped build the story. I’ve gotten mountains of support from the Fellowships Office (hi Kim, Sarra and Scott! Look, I wrote another essay!), Scholarship alums (including alum blogger Melis ’08), MIT faculty and friends. They’ve spent hours upon hours helping me to revise essays, prep for interviews and stay sane. And then there are the people who’ve written recommendation letters and worked with me on projects and let me potter around in their labs and etcetcetc. Nothing I’ve done at MIT has been done alone, and I’m unbelievably grateful to all the people I’ve met along the way. This place has so much excitement in it. It’s beautiful.

Basically: I LOVE MIT!! Thanks for reading, guys. If you have any questions I’d be happy to answer them, and I hope to see you all at CPW!