Cross-registration is one of the most amazing features to exist at MIT and Harvard. I say this both because it beautifully expands the academic opportunities for students in each school and because if it weren’t for cross registration, I might never have met some of my best friends. I wrote this blog to capture the memories I made last summer with my Harvard friends when we lived Boston. The second part of this story (coming soon) will discuss how our relationship has evolved since we all went home.

In the Spring of 2019, a Harvard student named Denisse C. ’22 cross-registered at MIT to take 6.0001 and 6.0002.⁠01 previously known as just 6.00 I happened to be working as an LA⁠02 Lab Assistant for that class. I spent 10 hours each week in office hours helping students get familiar with the basics of Python and data science through weekly coding assignments.

One of those students was Denisse. To be honest, I don’t remember much about our first interaction, but Denisse tells me that I asked her what year she was (a freshman, like me) and what her major was (she said “Course 8,” which is the MIT-way to say Physics). To date, Denisse is by far the best MIT-student impersonator I know⁠03 Probably in part because she reads all of the blogs... – I don’t think I realized she went to Harvard. I sort of remember asking her if she had any plans for how she’d apply her programming skills to her physics studies. I was really happy with her answers, given that I was also a freshman girl who was studying computer science for its applications to another field (in my case, neuroscience).

I clearly remember meeting⁠04 for the second time, I guess Denisse a few weeks later. I somehow found myself somehow talking to her in Lobby 7 for nearly an hour while she waited for the M2 shuttle back to Harvard. We mentioned our summer research plans and realized that we’d basically be next-door neighbors for the summer. I would be living at tEp and Denisse would be staying at PKT, located one block apart on Commonwealth Avenue in Boston. 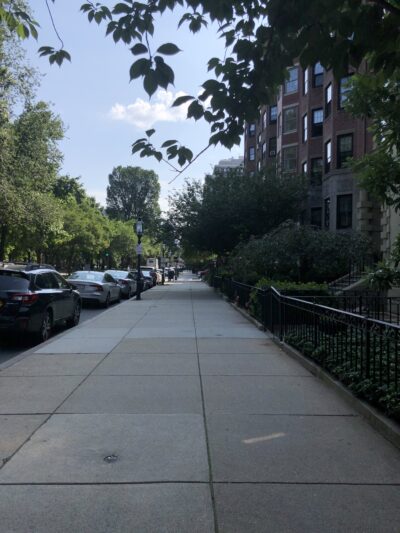 That summer, Denisse and I became fast friends. We bonded over everything from our piercings to our love for science. Most Saturdays, we’d wake up early to walk a beautiful two miles from our fraternities in Back Bay to Haymarket, an outdoor produce market in the North End. 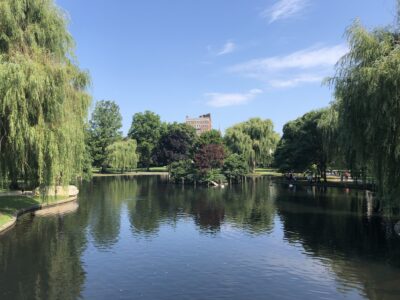 our Haymarket walk took us through the Boston Public Garden

We’d load our tote bags with Haymarket’s inexpensive produce and walk back (a lot more slowly) to Back Bay. By the time we got back, the sun would have come out, making the walk almost unbearable as we sweated and struggled to carry the heavy bags. It was always worth it, though – the long walks on the quiet mall and commons made for some great conversations. After dropping off our produce in our respective fridges, we met up in the basement kitchen at PKT to make brunch. I’d sneak over some eggs and bread from the kitchen at tEp and we’d have breakfast sandwiches on English muffins, Denisse’s signature chocolate pancakes, and plenty of fruit. 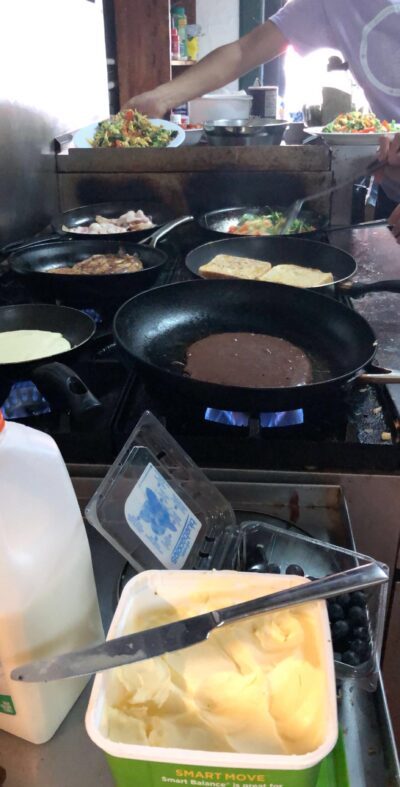 On one particularly sunny Sunday, we packed up a few boxes of Haymarket fruit and biked from Back Bay across the Harvard Bridge all the way to the Smith Campus Center at Harvard. The bike ride there was amazing. Nearly every leg of the journey took us along the Charles River. It really drove home the “school down the river” reference. We took the elevator to the tenth floor⁠05 It's card-access only, but a library card works and MIT students can get Harvard library cards! of the Smith Center, where there was plenty of room to study. I kept stopping to look out at the amazing views. It’s now one of my favorite spots at Harvard. 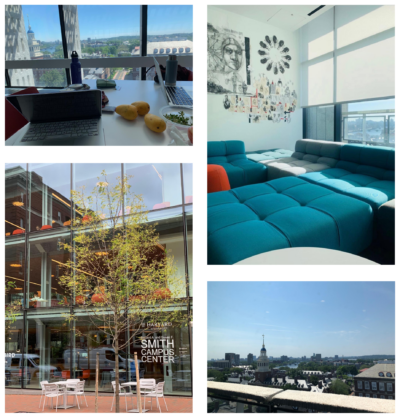 top left: the day we brought Haymarket fruit to the Smith center. all photo credits to Denisse and Paige

the 10th floor is so high up, it felt like i could touch the clouds…

In June, Denisse introduced me to Paige L. (Harvard ’22). Paige joined many of our walks and brunches and soon enough, we became friends too. The three of us made so many good memories. One thing I loved about our dynamic was how much we could learn from each other’s diverse interests. I went to lots of events I wouldn’t otherwise have even had on my radar; Denisse and I spent a night at an open house about quantum information hosted by the the Museum of Science and Paige and I watched Nick Takénobu perform on the cello at Club Passim, a live music venue near Harvard. 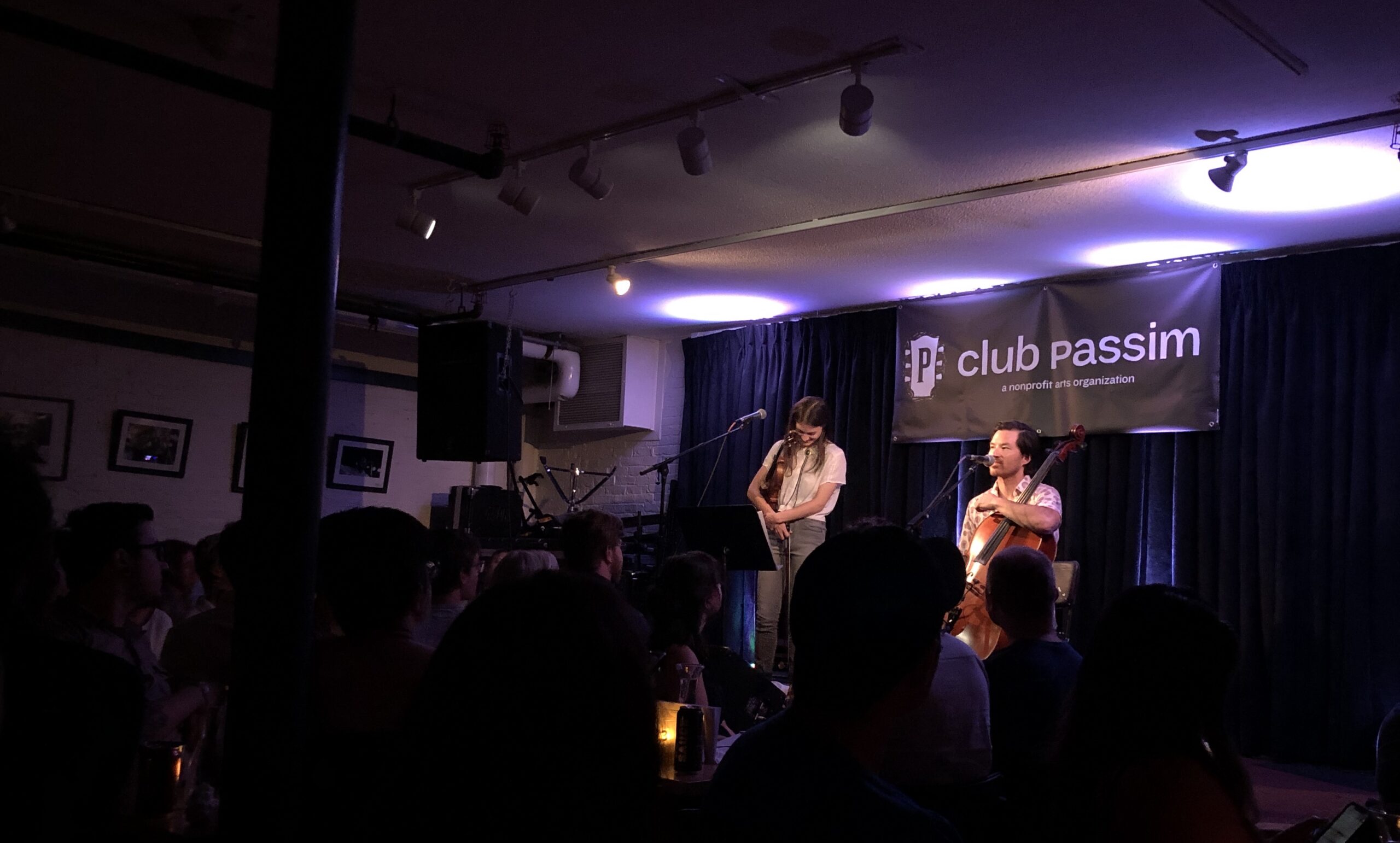 dinner and a show at club passim

I also loved how much ethnic diversity we shared. Together, we have roots in six different nations⁠06 Vietnam, Iran, Mexico, Russia, China, and America and the stories, music, food, and writing we shared were so beautiful and illuminating.

Splitting our time between three different living arrangements made it impossible to be bored. When we weren’t chilling on the ceiling-mounted couch in my room, we spent time with the other summer residents at PKT or in Paige’s dorm at Harvard. I loved that on July 4th we were able to hop between fraternities for double the festivities, before going back to tEp for the superior views of the fireworks over the Charles River.

couch that hung 3 ft from the ceiling, in my room at tEp. photo taken from my ceiling-mounted bed

One particularly special project the three of us undertook was making our own ginger syrup. We bought ginger from Haymarket, painstakingly peeled and sliced it, boiled it with sugar, and voila! Mixed with some seltzer water and whiskey ice cubes, it made for the perfect summer drink. Many months later, at my 20th birthday party, we had store-bought ginger soda. It wasn’t quite as good, but ginger-flavored drinks always take me back to last summer. 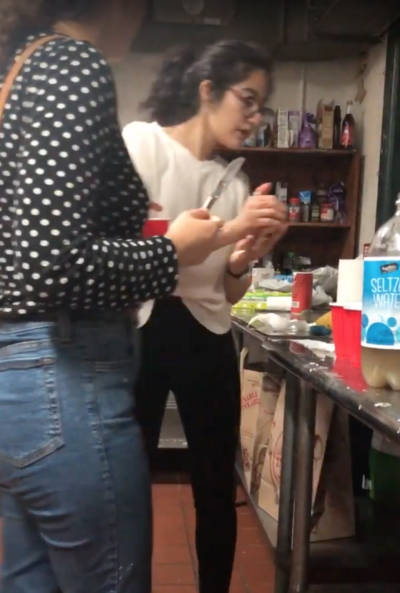 My memories with Denisse and Paige last summer are so warm and happy. We cooked, went to restaurants, and partied together. After the summer ended and school and life got in the way, we all hung out a lot less, save for the occasional library date or meal. 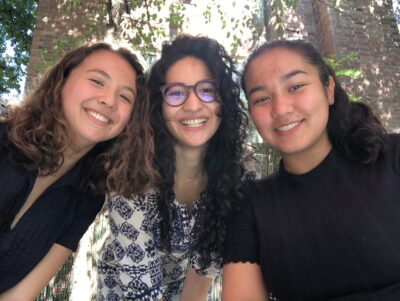 lunch at Orinoco in September

Even though Harvard is so close to MIT, I used to feel pretty disoriented when I’d visit. One perk of visiting Denisse and Paige at Harvard was how familiar Harvard now feels. Today, it’s my school-away-from-school. I can walk down Mass Ave or through the yard and point at all the restaurants, libraries, and dorms I’ve been to. 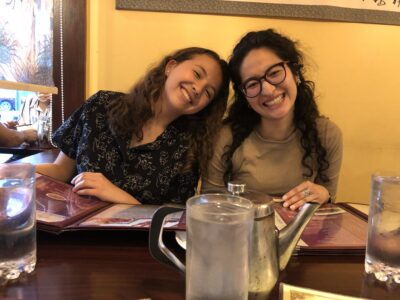 Though my MIT pride often gets in the way of admitting it, the dorms and many of the libraries of Harvard have a certain grandeur that MIT’s dorms and libraries lack. I’ve been to Harvard dorms where the whole thing feels like a movie set. It just looks too good for college students to be living in, but then again, it’s Harvard. I liked going on study dates at Harvard’s libraries. I think it’s because the aesthetic reminds me of Harry Potter. Despite this enviable aesthetic, I saw Denisse and Paige often at MIT when they chose to come study in our libraries and empty classrooms. Paige says she likes it because she doesn’t know anyone there and the new environment can help with her studying.

Denisse and I visiting Widener Library at Harvard

This past spring, Paige cross-registered at MIT for 6.036, a class I was also taking. It was so fun working together on our psets. I’m now the only one in the group who has yet to cross-register. It will happen! It’s a little more challenging for me to identify a class I want to take at Harvard, because my Harvard students who cross-register at MIT often do so for our computer science classes. There’s no obvious choice in the reverse for MIT students. I don’t think there’s many computer science classes I’d rather take at Harvard than MIT, so I’ll have to find something else and do some research on things like scheduling and class ratings.⁠07 Two things made easier by public student-built tools at MIT, of which Harvard does not have an equivalent (to be clear: they do have scheduling/ratings, they're just not public or easily navigable)

We make fun of Harvard a lot over at MIT, but I really couldn’t have chosen a better neighbor school with which to do cross-registration. Outside of formal inter-school things like cross-registration, the countless opportunities to meet non-MIT students through conferences, hackathons, dance performances, special talks, and parties is part of what makes going to college in Boston so very special.