From my journal the other night–

It’s 2 am, and I should be asleep. I’m listening to SJ Tucker on my headphones that only play in the left ear. I want to bask in this feeling, write it down so that I can read this some day and remember it all. 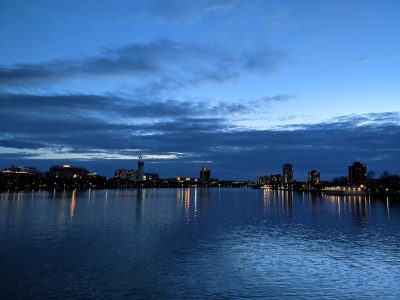 I expect there’ll be a deluge of blogs after this four-day break, so I’ll jump on the bandwagon early.

I could talk about exhaustion, how classes drag on you, hours of scribbling lecture notes or poring over psets, from morning until deep into the night. When I finally crawl into bed, I draw skeletal structures on the inside of my eyelids, as if I can puzzle out reactions in my dreams.⁠01 I’ve heard people say this actually kinda works for algorithms, but thus far it has not proven successful for intro organic chem.

For about a month I managed to write on the weekends, but classes expand like gas, into every possible space, and suddenly all my hours were full. In the middle of March, I set aside the novel I’m working on, promising myself I’d open it again after finals week.

There was snow on the ground, sparkling white when the sun emerged. I wondered for the umpteenth time if this break from writing would be the last one I ever made. Maybe I would never find my way back. Life is so much easier when there’s nothing that you truly want; that way you can’t be disappointed.

Fifteen years from now, I could be the person who says, “I used to write novels.” Hard at work behind a glossy desk, property of a company that paid more than I needed. The break room would be stocked with kombucha and RX bars.

“Maybe I’ll start again,” I’d say, every week, or month, or whenever I got drunk. “As soon as I have time.”

A week or so later, the snow melted, and I began to worry I’d be so exhausted from the semester that I wouldn’t have the wherewithal to jump back in to writing. I don’t know if people lose skill in this case but I will be out of practice. It would feel like trying to run after spending three and a half months in one room.

Then, one Wednesday night at 2 am, I was struck with the intense fear that I would burn out altogether. But there wasn’t much I could do about that, so I just sort of bowed my head into the storm.

A few more weeks passed. It’s beautiful outside now. I keep thinking I’ll blog, about work or writing, but I keep putting it off. Partly that’s from carpal tunnel — my hands can go only so many hours in a given week — but also I wanted something good to blog about. And there are good things. I just needed sleep and breathing room to see them.

I have not been writing, but I’ve been looking over my old work. I find myself doing it about once per week, even if I don’t have time. This weekend I totally didn’t, but at 1 am on Tuesday night I did, so I read a short story. It’s called “Footprints,” and I guess the premise is that incognito heroes who tear up cities as they secretly fight crime will not stay secret for very long.

I’d written the story in 2018. Some of the sentences were structured poorly, some of the fight scenes could be clearer. Some of the jokes really didn’t land. But I laughed at them anyway, because three years ago I didn’t know how to fix those things, and now I do.

And a lot of it was good, a lot of it was glowing.  It was the first time I’d written anything in a modern setting, and I could see myself playing with the idea of familiar spaces, like coffee shops and the greenspace by a river, and liminal spaces like worn-down malls and hotel rooms in the middle of the day. I was fleshing out ideas I would use again later, a certain character dynamic or turn of phrase that would turn up in a different world, tapped out in a different corner of my house, or somewhere else entirely.

I may be rusty when I get back to writing. But I know how to fix this, clean up the messy sentences and make the mystery clear. I’m happy that I found this thing, this little buried treasure. I want to polish it until every facet glows.