with help from some engineer friends

This is a long belated blog post; it’s been a busy summer. But I didn’t want to wait for the next cycle to begin before I told this collaborative tale from last April.

Longtime readers of the blogs may know that I’ve come to understand the challenge of MIT through the lens of physical exercise. I’ve written about grad school and/as the Boston marathon, the challenges of balancing growth and recovery, and the isomorphic relationship between yoga and powerlifting.

For me, strenuous⁠01 But not injurious! exercise isn’t just how I stay fit: it’s how I stay sane. I’ve found I need to continuously register the connection between body and mind⁠02 Cartesian dualism is a pernicious myth. to keep both in a good, healthy, well-functioning place. And I’ve found I benefit from a diverse range of exercises that all do different things. Yoga teaches me patience. Running teaches me persistence. Surfing teaches me when and how to take risks.

But the most important and fulfilling thing for me is powerlifting, which is just a fancy way of saying lifting heavy things for its own sake.⁠03 Distinguished from bodybuilding, which prioritizes aesthetics. I love lifting heavy things. I love having to set my body up precisely to execute a lift safely. I love being able to channel all of my aggression and anger out of my body and into the floor on which I’m standing. I love being able to make progress in a way that is measurable in a messy world that so often defies that anachronistic conceit. I love that, as Alyssa Keiko once wrote in an influential essay for the Toast, “it never gets easier, you just get stronger,” which idea Sabrina blogged about in the past too. 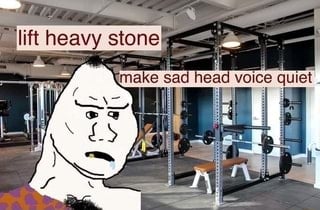 I’ve lifted 3-4 days a week almost every week for the past 6 years. Mostly at the Z on campus; sometimes, on the road where I can find a gym.⁠04 I keep a stack of guest passes to the Stanford gym in my wallet, for whenever I'm in the Bay Area. No one tell Kiyoe. In March, when everything shut down, I spent the first two weeks like everyone else, trying to orient myself to a new reality. I probably needed a break from lifting anyway. But then, the sad head voice started becoming unquiet, so I started strategizing.

I live in a second floor apartment in Central Square. It’s an old house with low ceilings and creaky floors, so it was immediately clear I couldn’t deadlift inside unless I wanted to end up in my landlady’s living room. However, there is a narrow, uneven, paved parking spot next to the building, and she was kind enough to offer me a few square feet for the interim.

At this point, I had a space, but no equipment: no platform, no rack, no bar, no plates. This was early April, and seemingly everyone in the country was trying to buy used gym equipment for their basements, while every manufacturer was shut down or out of stock. After a few days of Craigslist missed connections, I was eventually able to snag a generic big-box store barbell/plate package at a heinous markup from a thirtysomething ginger with a Ron Paul bumper sticker who asked if I could pay him in Bitcoin because he thought the banks were going to fail. Now I had the heavy things, but still needed sturdy ground on which to stand. I could, in principle, buy a rack, but the pandemic price-gouging was likely going to take one out of reach, and in any case that wouldn’t fix my foundation.

My grandfather was an engineer, my father was an engineer, both of my brothers were trained as engineers; I, by contrast, come to this project armed with only two critical theory degrees, a cordless drill, and ambition. I began by Googling homemade power racks and quickly discerned that they involved lots of triangles made by pressure-treated lumber. I didn’t have any CAD software or training, so I started by sketching out my plans, first on paper, then in Google Slides. 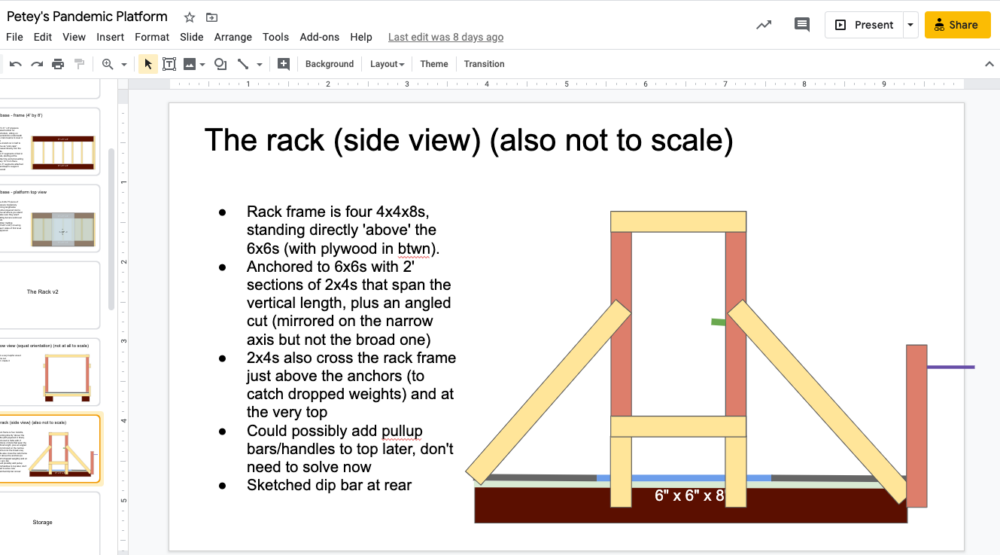 By this time, it was CPW, and we had a big Discord going with all the 2024s, and many upperclassmen, in it. In one of the off-topic chat channels, I mentioned my project and shared my slides. One bored, helpful adMIT named Wilson S. ’24 took pity upon me and decided to turn my sketch into actual accurate renderings. 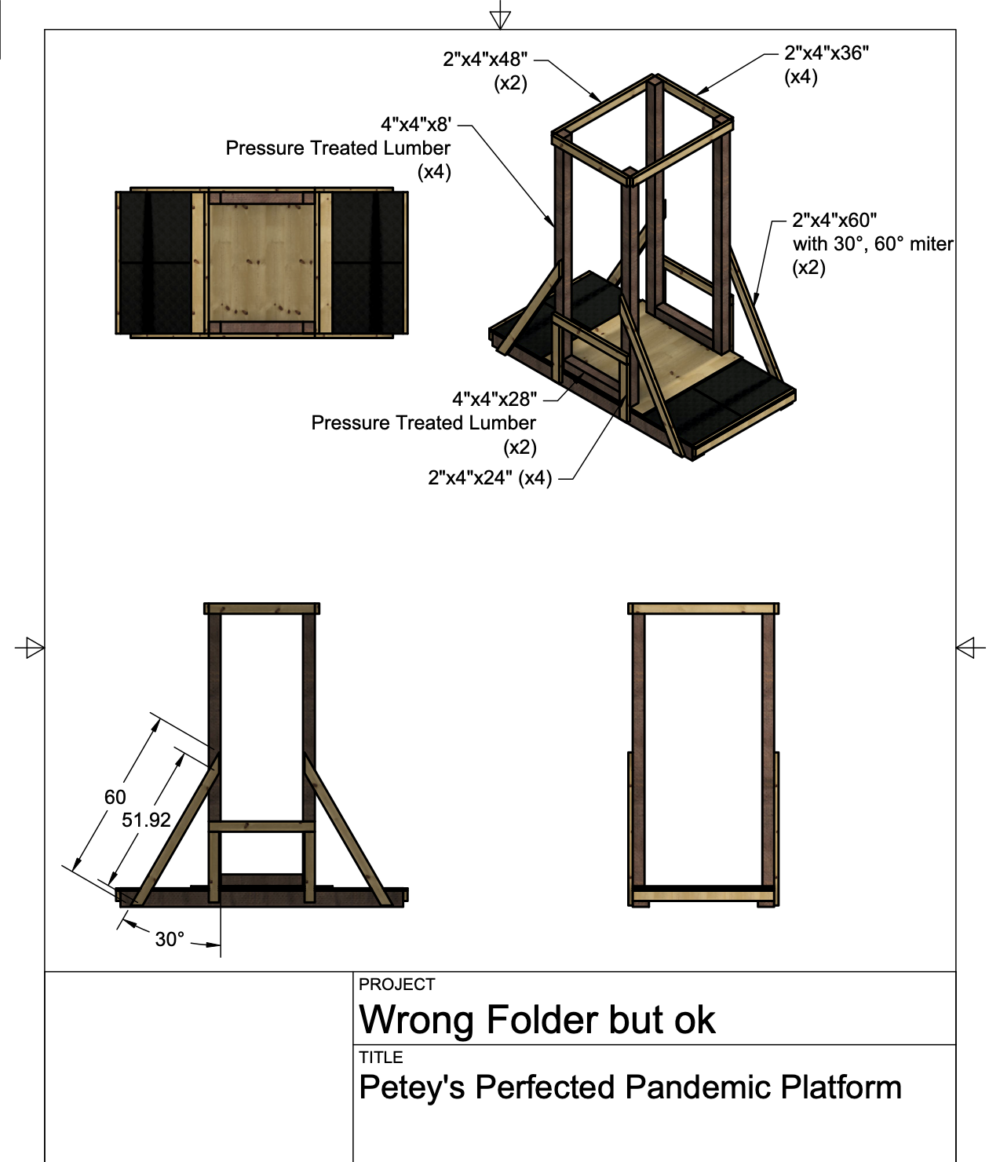 I was greatly touched by Wilson’s help, and told him how grateful I was. In response, he sent the following meme to like 2,000 people. 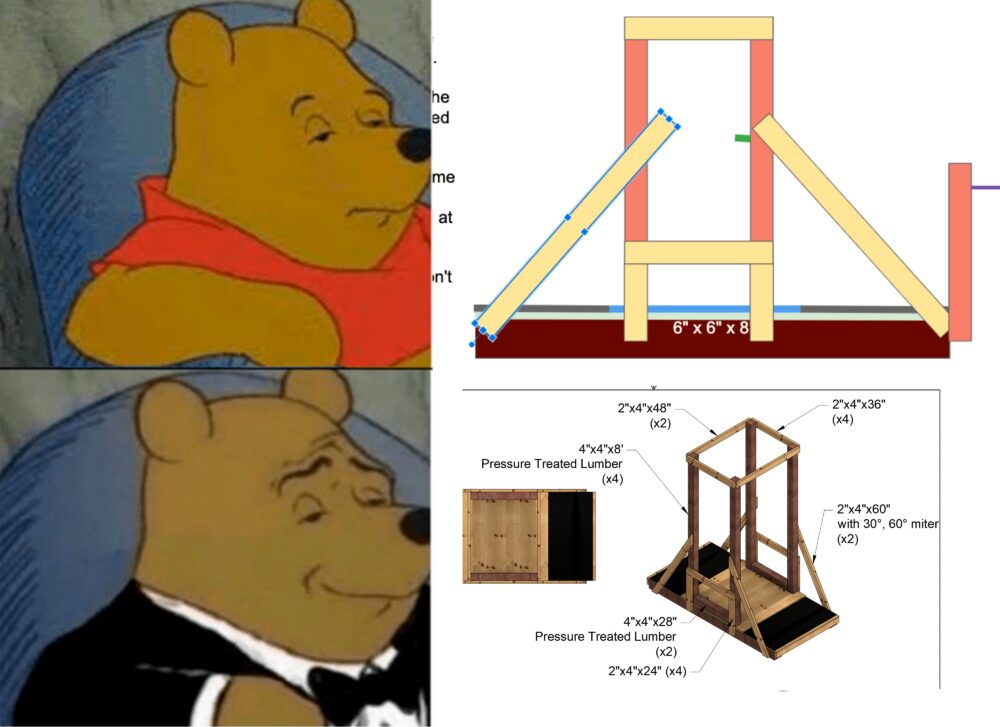 this is what i deserve

Armed with Wilson’s rendering, I rented a UHaul and drove to Home Depot, the same one from which Jamie C. ’19 and I (among others) had once bought the materials to build a cinder block oven for a disastrously large pie. I loaded up lots of lumber, decking screws, and pipe fittings, and drove them back home.

The next day, former blogger (and Course 2⁠05 MIT speak for Mechanical Engineering. alumna) Selam G. ’18 walked over to help me build the platform (with masks, at a distance).

After a long day’s work, Selam went home, and the next day I went out and put the finishing touches on my big wooden son. 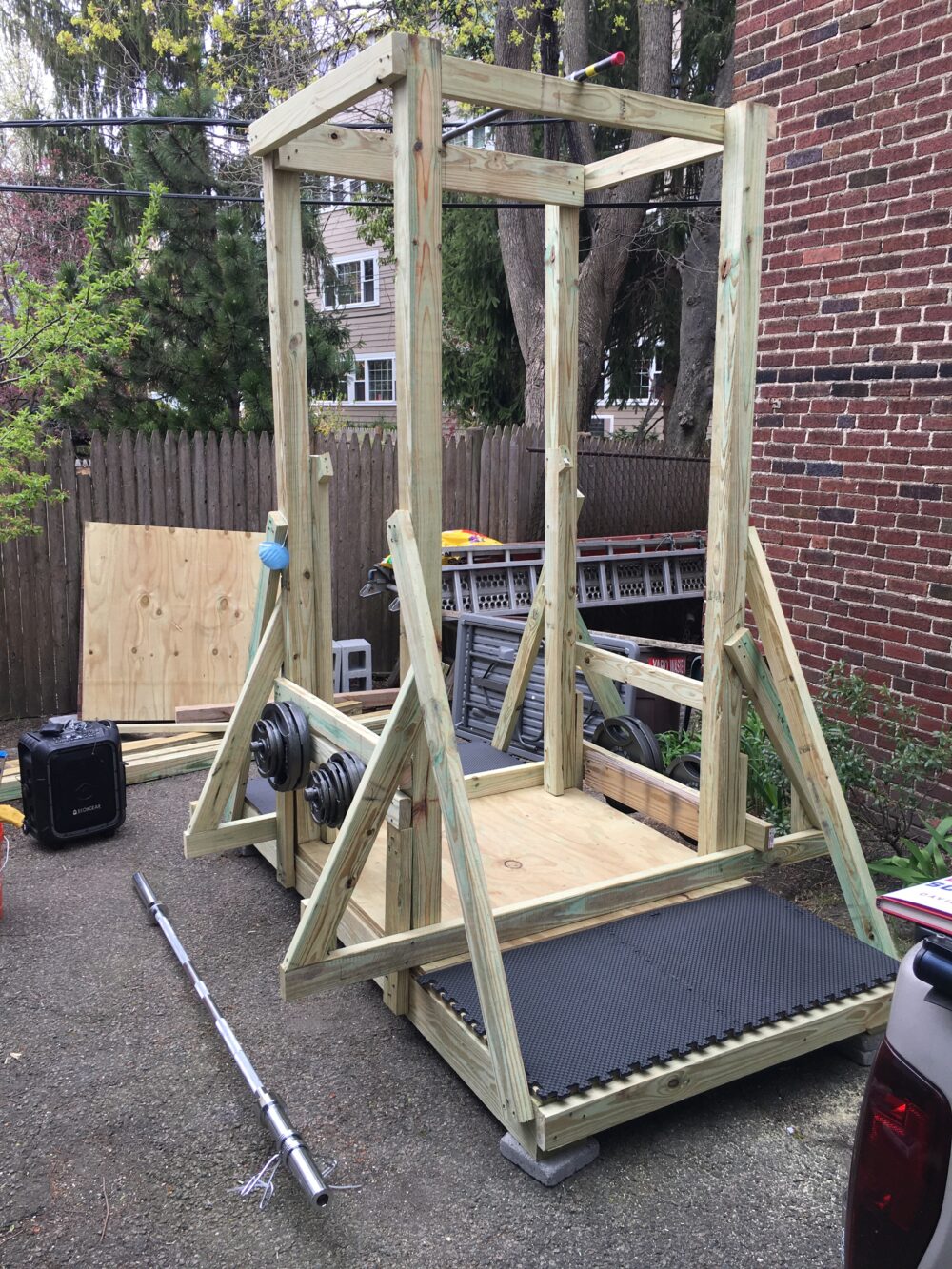 Since then, I’ve been back to my old habits, lifting 3-4 days a week. After a slow start from the time off I PR’d all my old lifts and learned some new ones. I like lifting outside. It presents new conveniences, given the fact that I just have to go downstairs, but also new challenges: the rain, the heat (and soon, the cold), birds and spiders and an inquisitive neighbor’s kid who likes to hang his head over the fence and ask me about dinosaurs between sets. The challenges keep me grounded too. If it’s raining, I can’t lift, and I have to be okay with that. I have to attend to the weather and the wind and the things outside of me that affect me, because these too are part of what affect me and are then incorporated into my through each workout.

Whenever I lift on this platform, it also makes me think about all the people who made it possible for me to do this. My landlady for giving me the space; the neighbors for tolerating the noise; Wilson for making my sketches into models; Selam for helping me put it all together. There’s something about the community collaboration that makes it more special, like what I imagine it must be like to have your friends organize a barn-raising to help you out in a time of need. I’m endlessly grateful to them for their kindness in helping me attain some modicum of stability and happiness in a difficult time.

When this all started, I remember doing the math on all the equipment I was buying and wondering if it would be worth it if/when the gyms reopened. I decided that, if I had to use the platform through, say, July, the three months would be worth it. Now it’s almost October, the Z is closed to non-campus staff through the rest of the year, and my new plans are sketching how I’m going to build a polycarbonate roof to keep the worst of the snow and ice off the platform. In a confusing, chaotic, unsteady world, I like having a rock-solid foundation on which to stand, and slowly, surely get stronger with the help of my friends. 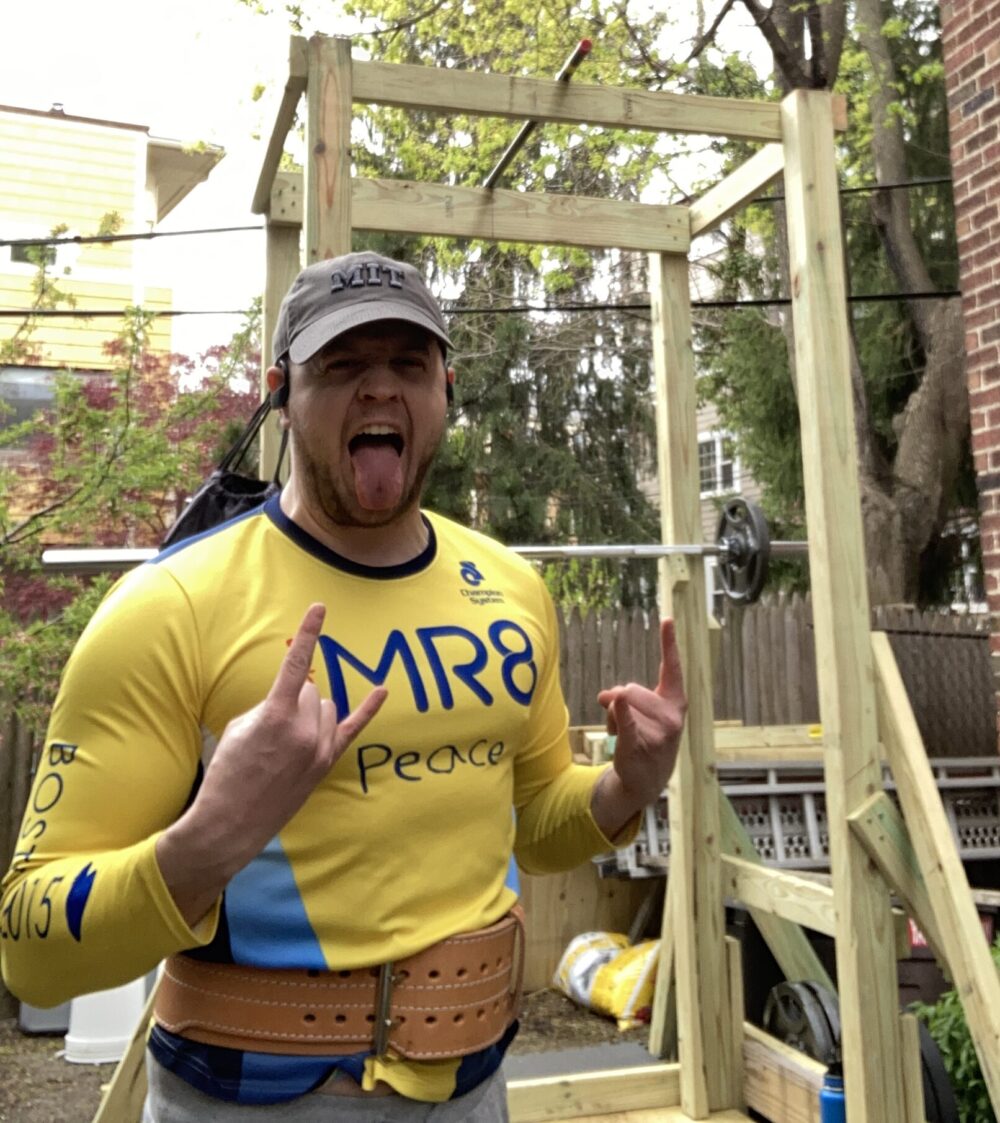