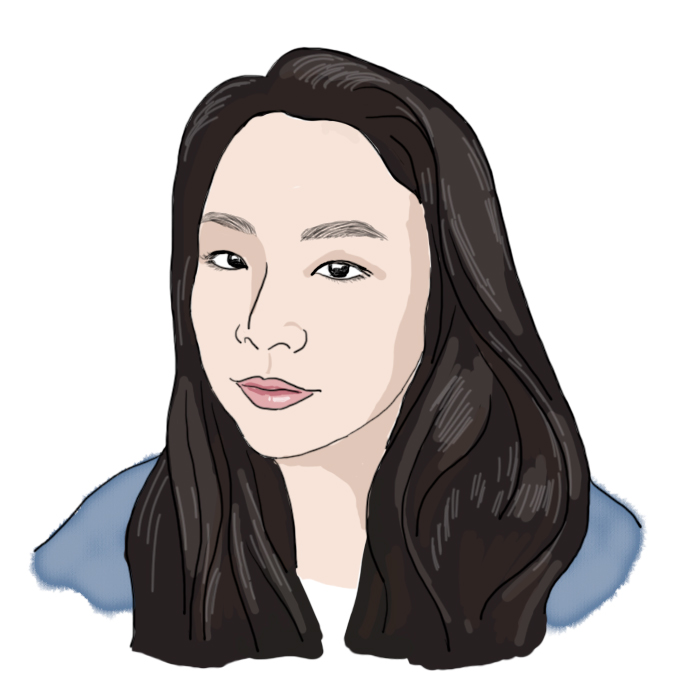 A recipe for disaster by Jamie C. '19

Behind the scenes of the "giant pie" video

Hi everyone! By now you’ve probably seen the decisions promo video, where we made a giant oven and cooked a giant pie in it. Kristen and I, and a bunch of other people (mentioned below) put too much work into it last semester, over IAP, and basically until it was uploaded, and I’m excited to give you the full story of the complete mess that we made. Here are extra video clips that we filmed, and there will be timestamps throughout this post that correspond with this video:

We started planning this in November-ish. We went through a bunch of ideas, like a Buzzfeed/Tasty-style video of a pie recipe, going for a Guinness world record for largest/most pies (way too big/logistically difficult), and finally, this. Kristen did a bunch of thermo (0:07), and I used volumes to scale up normal pie recipes. After we had our ingredients and materials finalized, we bought all the ingredients from Costco and needed a uhaul to bring it all back (0:53). We were buying 140 cans of peaches so Petey had Costco put them all on a pallet and forklift it into the uhaul (2:01). The Uhaul sank a few inches when the peaches were placed inside.

On the way back, Kristen, who was driving, needed to brake suddenly and the whole pallet just fell everywhere (2:16). This dented a few of the cans and made a mess in the uhaul so we couldn’t use them 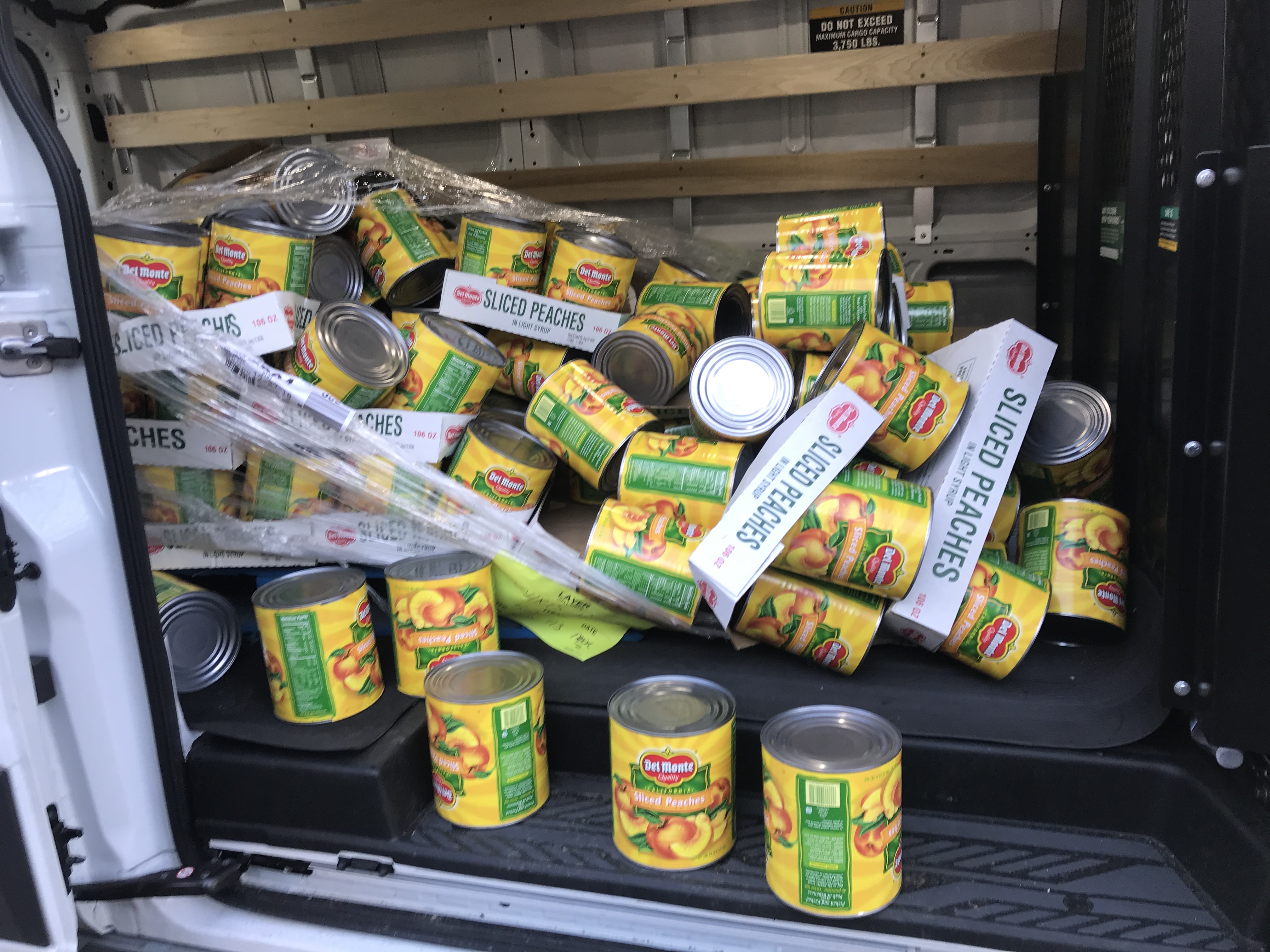 Kristen is an actual course 2 and made the frame. We designed it on Solidworks over winter break, and then she scavenged metal from a scrap metal yard (3:02). She’s a mentor at a makerspace/machine shop (The Deep) so we had access to their machines and welders (3:58). We brought all the metal over to the shop and Kristen welded the pie rack by herself (4:29). The night after we were up until 3am welding the oven frame. 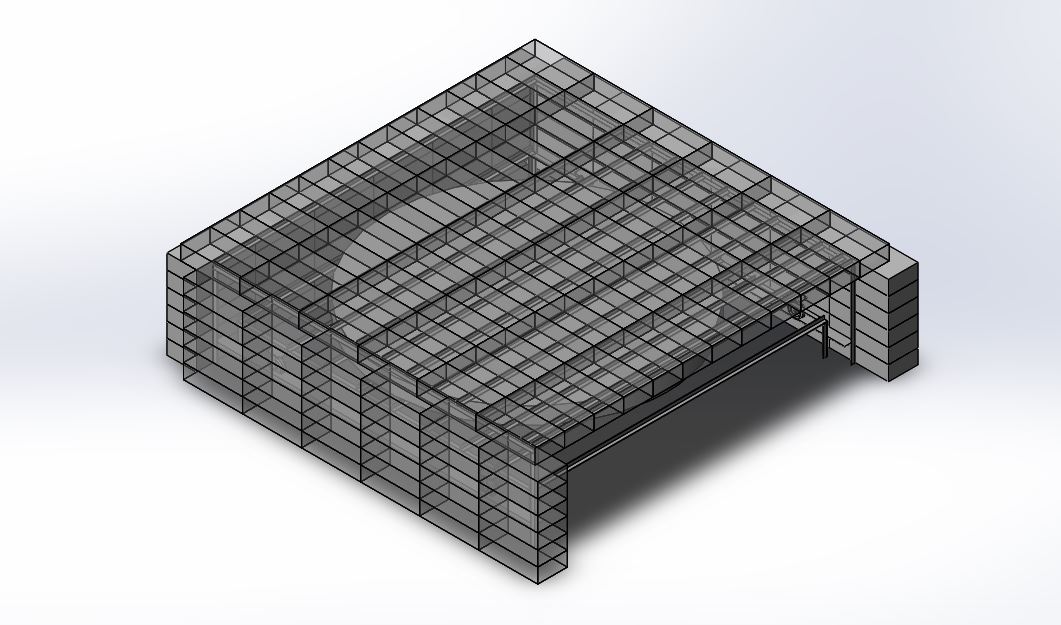 Then we noticed a problem. We had made it in 2 parts to be bolted together so it would fit through all the doors and hallways and back to East Campus but the steel was so heavy, we weren’t sure if it would support all the concrete blocks we were going to stack on top of it. We couldn’t just add another leg at the droopy part because that was supposed to be the opening of the oven, the “door” that the pie would go in through. 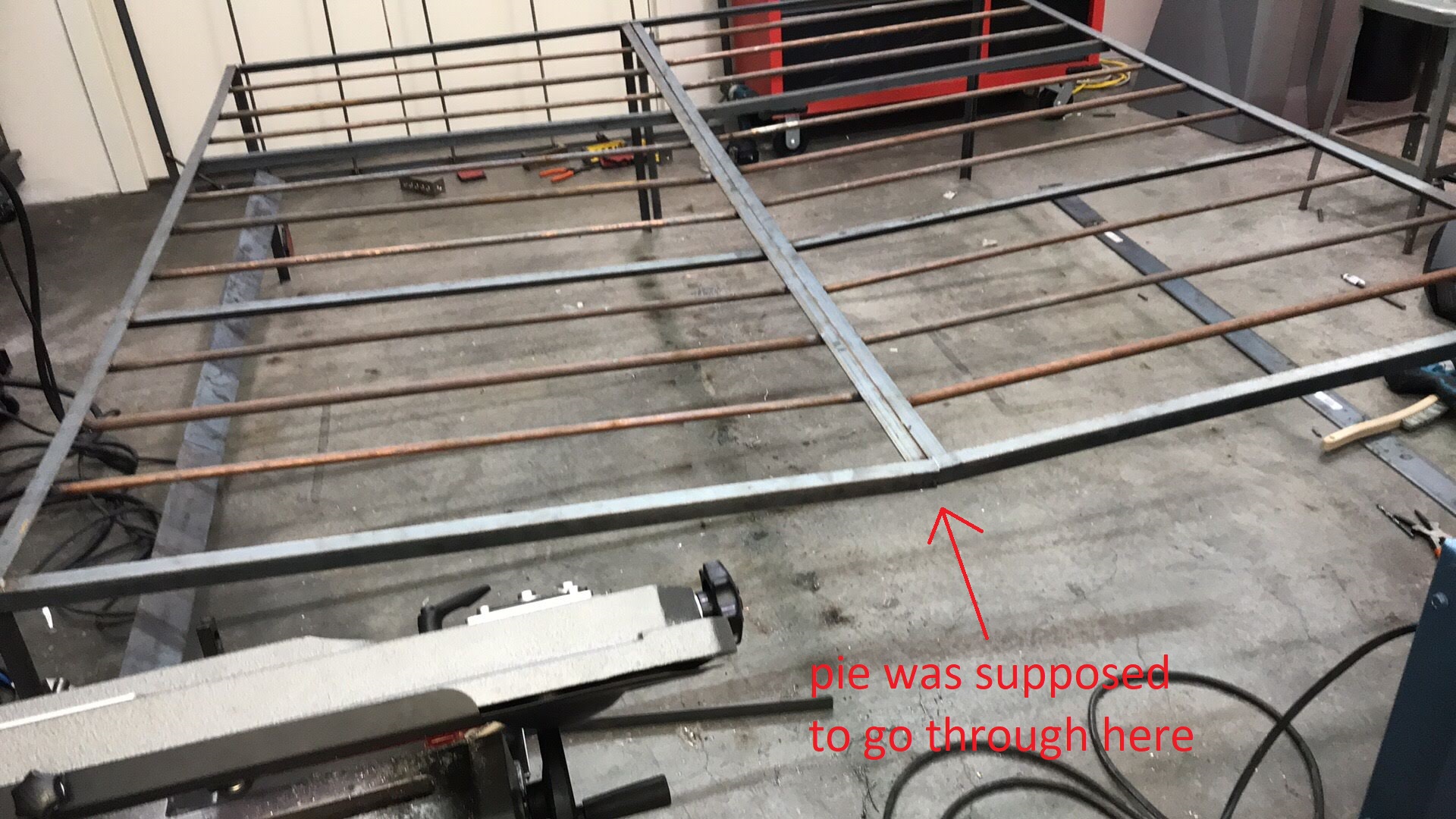 We sat for a good 15 minutes trying to figure out how to stabilize it without blocking the door, until Kristen had the biggest brain-est energy-est and realized we could just rotate the oven frame. The pie could go in through an adjacent side and we could weld legs onto the droopy side. Brain cells this big. 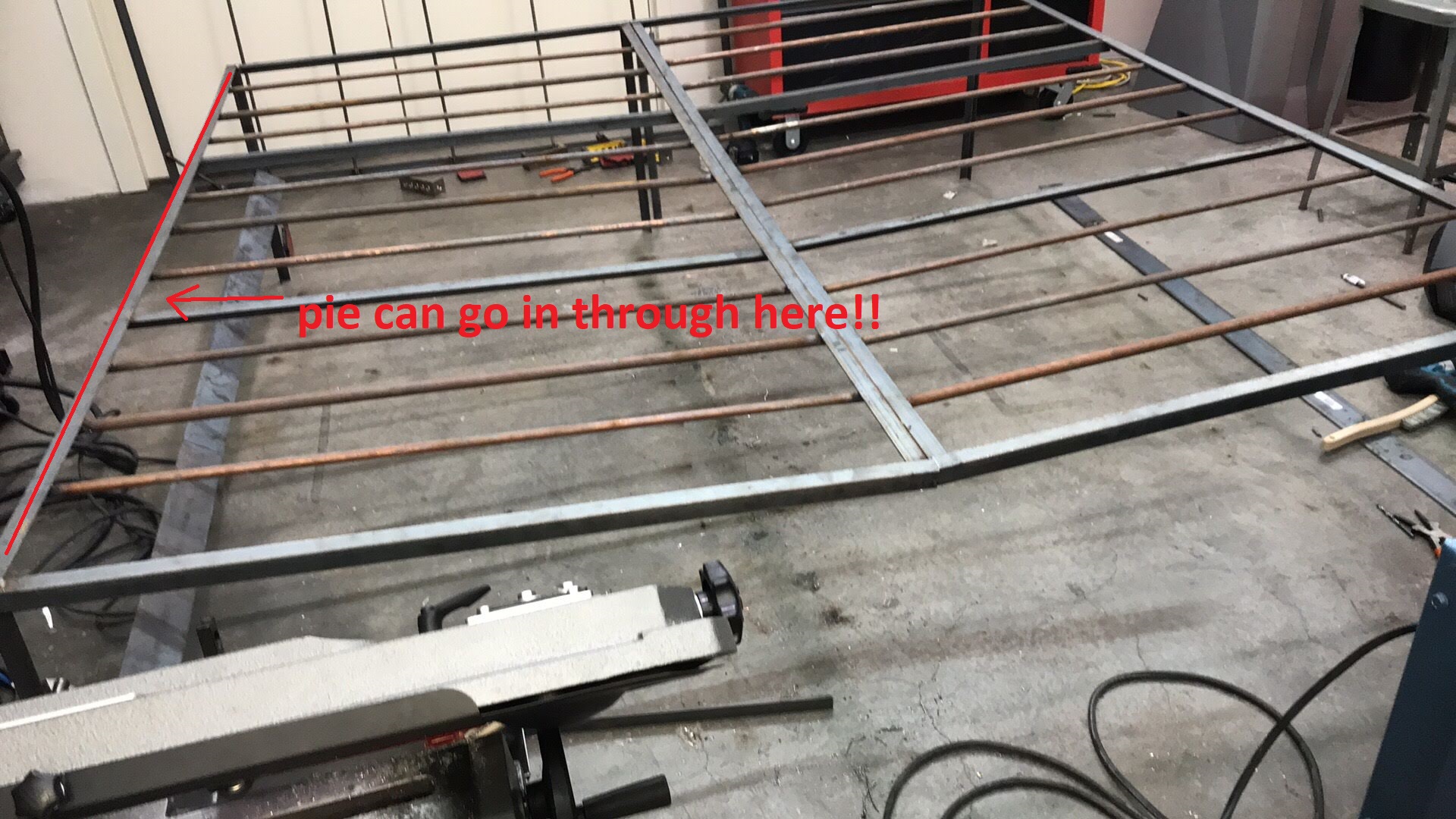 Kristen and a bunch of East Campus residents put together the oven in the courtyard. Even with the extra leg at the droopy part, we still didn’t trust the frame to hold up all the concrete blocks, so we decided to cover the top with layers and layers of aluminum foil instead. The air gaps between the layers of foil did a pretty good job of keeping the heat in.

Next was to make the crust dough and freeze it so we could roll it out and press it into the pie tin on bake day.

The official video has super aesthetic clips of me sprinkling sugar and carefully measuring ingredients in the 1E kitchen but this was filmed afterwards using more reasonable quantities. We actually made the dough and filling in Talbott kitchen and it was chaotic.

We made this recipe 90 times, which is too much of anything probably.

We made the peach filling the night before baking (6:40), around 228 times this recipe. It requires cooking the peaches before it goes into the pie crust and it took fucking forever because there was so much liquid that had to boil out. Also so much butter, it was disgusting.

The butter melted during the cooking process, but when the filling mixture cooled, it re-solidified into a mass of cinnamon and nutmeg coated fat at the top of the pots.

We also needed to drain out as much of the liquid as possible (7:11) so the pie wouldn’t turn into soup, which it did in the end anyways. Katherine Yang had the big brain idea of siphoning out the liquid using pvc tubing (this is how people steal gas). It kinda worked.

We mostly used strainers to get the liquid out, and that also took fucking forever. We started cooking at 7pm and finished at around 5am, and by then, we needed to start rolling out the dough.

While this was happening Kristen was cutting the giant aluminum sheets and riveting it together to make the pie tin (5:08). Here’s me laying in it because I’m 5’2” and the pie was 6.28 feet in diameter. We covered the tin in many layers of aluminum foil afterwards to make it watertight and because the aluminum was found at a scrap metal yard.

At 6am we started rolling out the dough (8:25) and it was just too much dough, we didn’t even roll it all out. We pressed it into the tin (8:45) while the briquettes were heating up and being thrown into the oven. We pre-baked the crust, but the dough we lined around the sides of the tin fell down to the bottom into an uncooked lump, and the middle of the crust burnt (I think the coals were too close to the pie tin, and the heat went straight into the tin instead of distributing around the whole oven). We just ignored that and started scooping the filling, which there wasn’t enough of, on top of the burnt/undercooked pie crust (9:15). The peaches had cooked down and reduced in volume way more than we expected, so instead of being 4 inches thick, the pie was about 1 inch thick. At this point, before baking, the pie still looked alright. 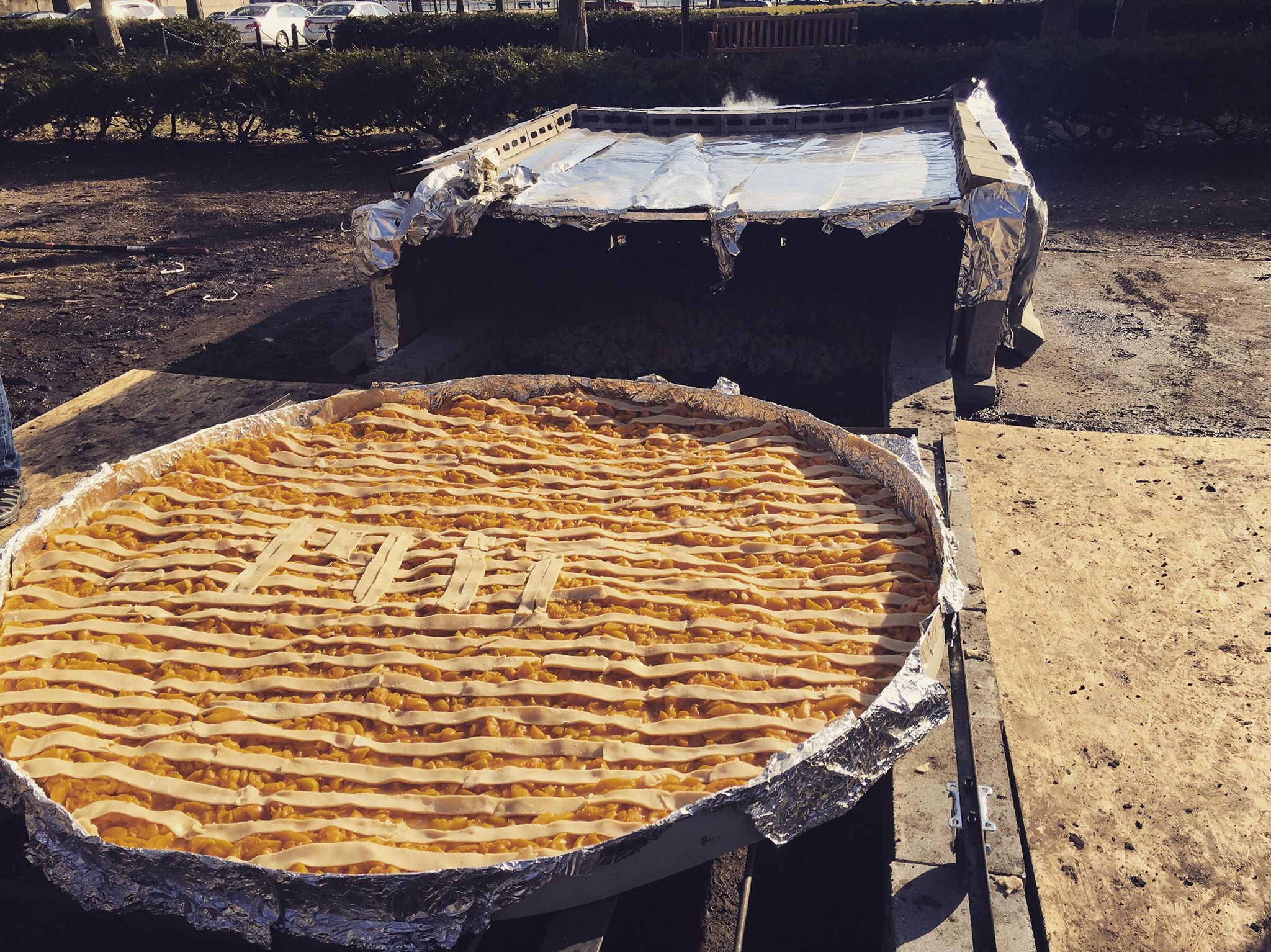 It also took fucking forever to bake, and the peaches kept releasing more liquid and creating a swampy soup. The crust kept absorbing the liquid and not cooking fast enough, and the longer we baked to try to get the crust to cook through, the more liquid came out. Unlike the video would have you think, we didn’t lounge around and watch adventure time while waiting for the pie to bake (we filmed that afterwards- 10:00). Instead, Kristen watched the pie bake and I made pie crust crackers (little squares of pie crust to be eaten with the pie filling since the crust was either burnt or undercooked). This was probably the best idea in this whole terrible idea, thanks Mary (1E GRT)!

Finally, 21 hours and one panic attack later, at around 4pm, the pie came out. 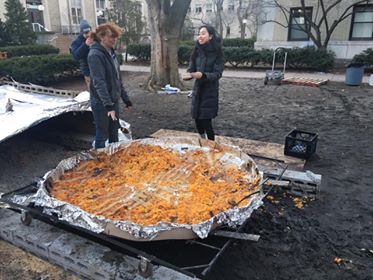 As you can see it doesn’t look great. It was swampy and the crust was undercooked in some parts and burnt in others, but apparently people thought it tasted fine. I hid in the kitchen because I couldn’t handle any more people or stuff in general and helped Jenny, who stayed up and helped the entire time, clean all the butter-coated kitchen surfaces and pots. These were giant fucking pots and would barely fit in the normal-sized sinks. There were also butter-coated storage totes and butter-coated buckets and butter-coated utensils. Everything was coated in a layer of butter which took fucking forever to clean. I had to take the storage totes and buckets into the shower and scrub them.

So yeah, after staying up for 30 hours and working for 22 of those hours, this was worse than all of Kristen’s and my finals weeks combined. Our feet hurt when standing up and sitting down, and our backs were going to collapse. I d̶i̶e̶d̶  slept for 19 hours straight and then went to the bad ideas ball the next day (a party that 1E throws every IAP for Bad Ideas), where I drank to forget my problems and served the strained peach juice to our guests. There was a whole trash bag-lined trash can full of it (7:18) and I don’t think very many people wanted it. They were horrified but only we knew the true pain we had endured the past two days.

Here’s all the people, credited and uncredited on the video, who helped with this project:

Natasha Ter-Saakov (Bad Ideas Chair who approved this truly bad idea, gave us workers, and also helped with the baking)

Kathleen Esfahany (putting together oven, baking crust crackers, going to Costco with us)

Thank you so much for helping out! I wish we hadn’t birthed this terrible idea but you guys made it possible in 22 hours instead of like 100.

I’m one of those seniors who can’t say they wholeheartedly love MIT, but I do appreciate small things like the cats at East Campus and the architecture department allowing me to play with ants and chocolate for one of my projects. I thought I really liked science before coming here, but I’m now t…
Keep Reading