Parents! A cappella! Thesis! Superheroes! Film class! And generally hanging in there @ MIT

Internet! Long time, no talk. Why such a long time and so little talk? Well, there has been a lot happening, although in some ways very, very little has happened, and I’ve been trying to write blog posts about both of those things at the same time which became very muddled and confusing extremely quickly.

Here is a list of blog posts I meant to finish, to no avail:

And after a while it became even harder to write a blog post because I wanted to capture all of my experiences, good and bad, and as it inched closer to a month since my last post obviously I couldn’t fit everything in in one go. But! Like the Great Pumpkin rising from the pumpkin patch on Halloween, I am back at 1369 Coffee and have risen from the graveyard of unfinished blog posts to bring you… a highlight reel of the past month’s adventures.

Family Weekend happened in late October, and it went a little differently for me as an upperclassman than it did for me as a freshman, mostly because it was my parents’ fifth (!) Family Weekend and they felt like they’d seen and done pretty much everything worth seeing and doing on campus. They didn’t even register for the weekend officially because we spent a lot of it off-campus in Boston, shopping or eating or hanging out with friends.

Having parents visit gave me an awesome excuse to finally clean up my room, yay! I assembled my futon and stuck a lot of the art I’d picked up at conventions on the above my bed wall and everything: 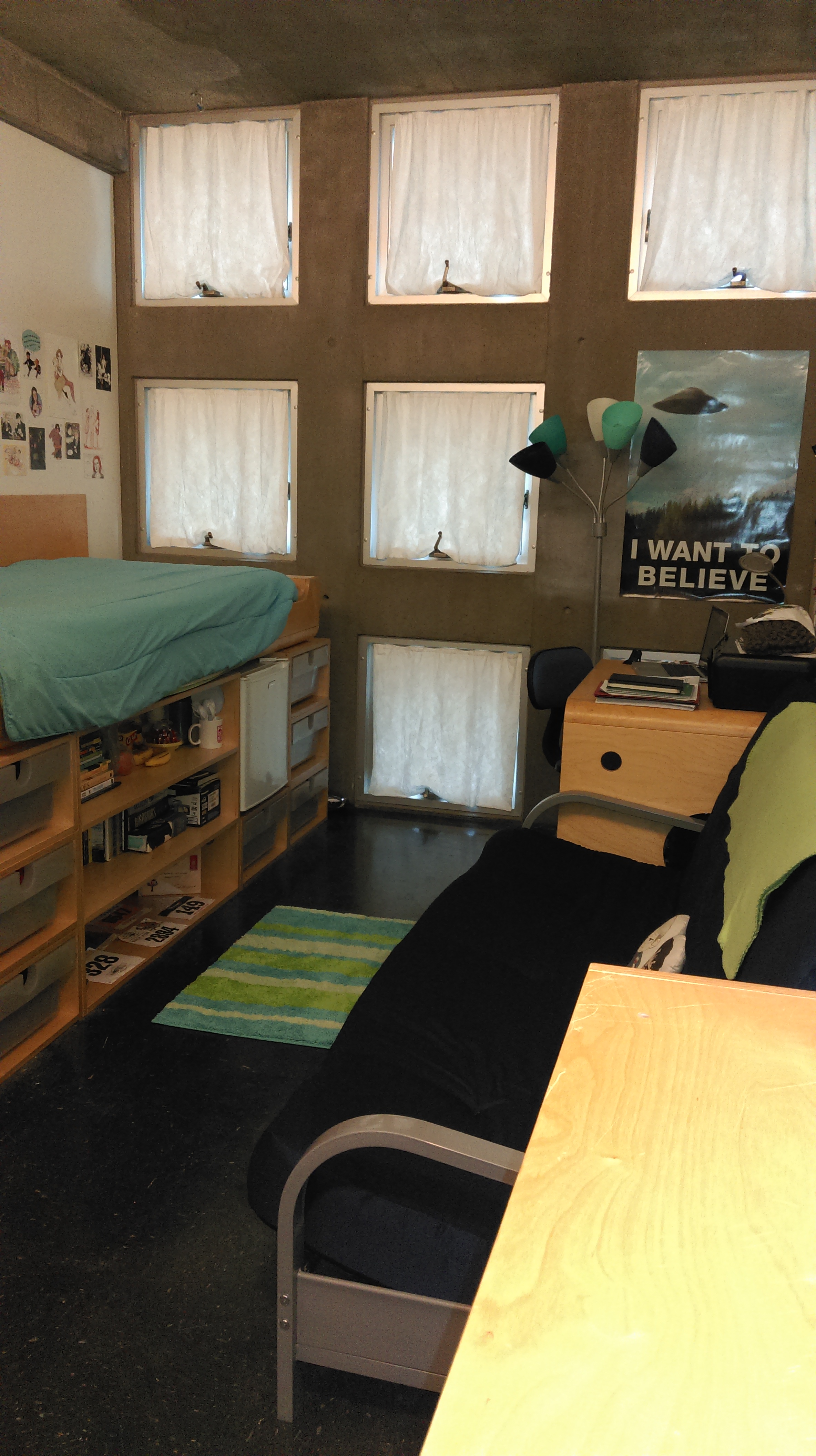 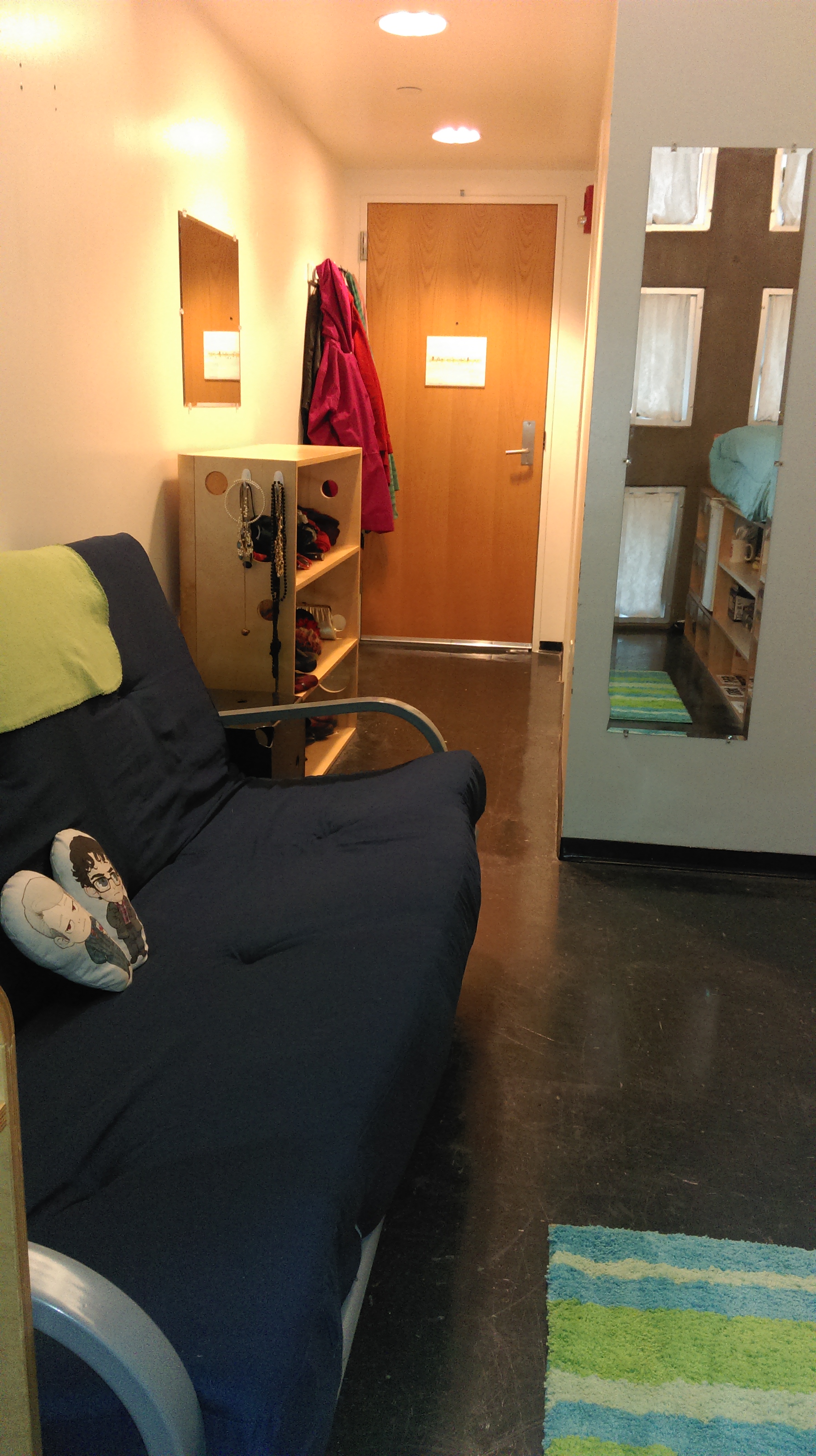 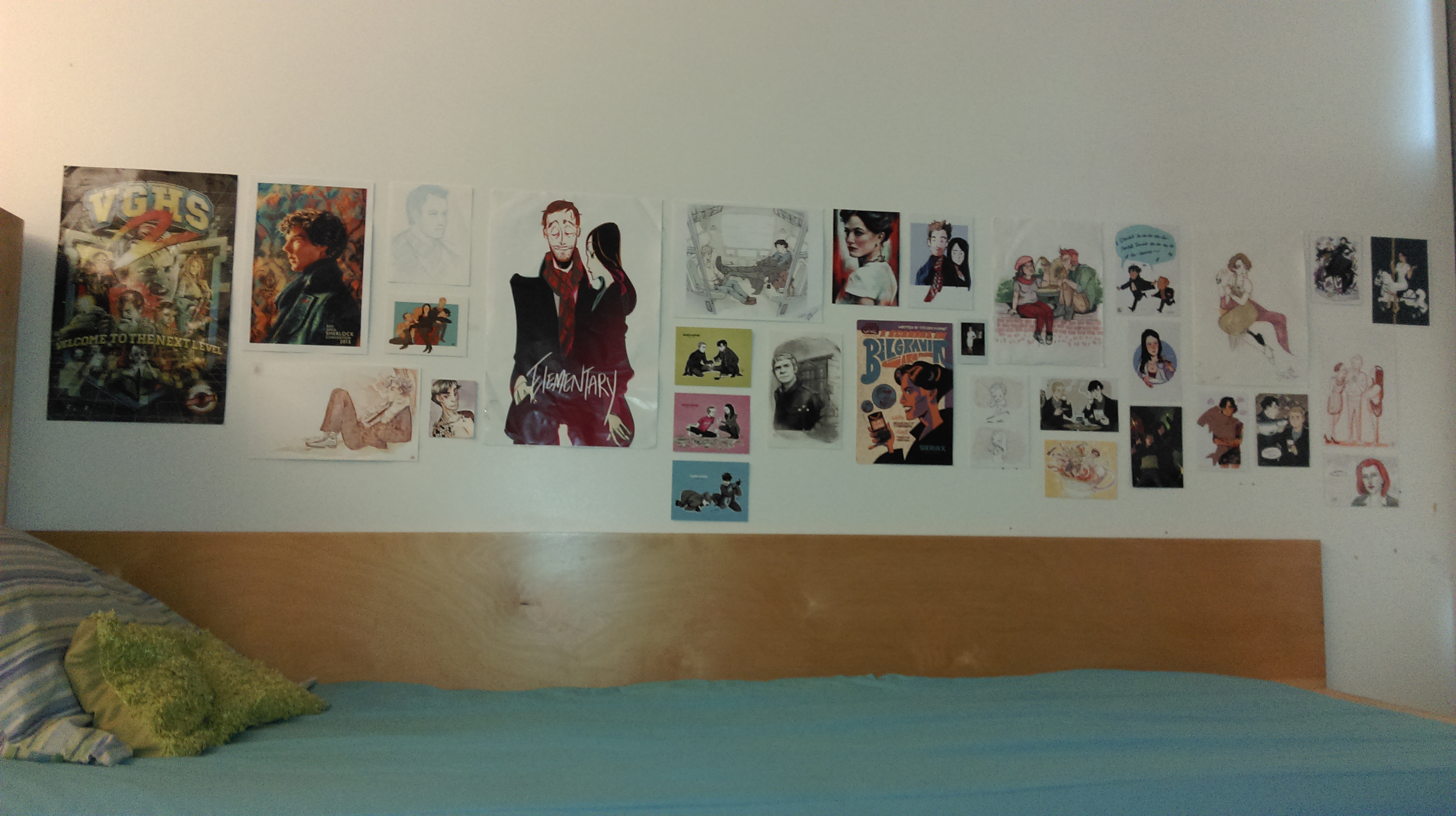 Sunday morning, we sat on that futon and Skyped with my little sister in Spain. It felt nice to have the gang back together—or as back together as we can be until she comes home for Christmas.

The main reason my parents come to Family Weekend in Boston year after year is for the concert Saturday evening, when MIT’s a cappella groups sing two songs each. I’ve been the musical director of the Asymptones, MIT’s nerdiest a cappella group (which is really saying something), for years now, and this is the only time my parents get to see us perform. You can watch as I awkwardly introduce the group and we cover a Weird Al Yankovic cover of a certain Lorde song below:

In October, my yoga studio in Central Square had a special deal where you could buy a 31-class pass, good only for the month, for a supreme discount. The idea was that by the end of the month, all those classes would be gone! That’s a class a day, roughly. Maybe zero some days and two on others, if you need to catch up.

Naturally, being me, I thought I didn’t have enough to do in my life already and that this challenge would be a fantastic way to fill up my free time. The studio called the challenge “31 in 31,” but since that makes a terrible hashtag I started calling it “Yogtober” and tracking my progress on Twitter.

As it turned out, the challenge was an awesome idea for me. I only have classes on Wednesdays and Thursdays this semester, so doing yoga every day ensured that even when I didn’t have class, I had structure. It also ensured that I felt utterly invincible for two weeks in October. I was glowing. My mood took the most incredible upswing. When I saw my therapist in Newton, all I had to report was, “I feel awesome! This is amazing!”

Unfortunately, after Family Weekend I completely crashed. I got sick and wasn’t able to completely complete the challenge, but I managed 25/31 Yogtober classes in the end. I think 25/31 is pretty good, and even a month later I’m still more stretchybendy than I have ever been in my entire life.

Sometime in the last month, I hit a snag on the novel that’s serving as my writing thesis. I’m not sure exactly when that happened, but I know why. For a little while, I lost faith in the story I wanted to tell and the way I wanted to tell it. It’s not that I fell out of love with the characters, or with their lives, but I started questioning my ability as a writer—as a human being—to bring them into the world.

I’m told that this is a perfectly normal thing to do when writing a novel.

Little by little, I started to piece my belief in myself back together. I worked through writing exercises with my thesis advisor and focused on developing my narrator’s voice, one of the important things that I thought had slipped from my fingers. For a couple of foggy weeks, in there I was gripped by the paralyzing (and incorrect) notion that maybe I was only writing myself in weird and different situations. Maybe my range is actually that limited. Maybe I have no talent! Maybe…

One of the exercises my advisor made me do involved writing down an anecdote I often tell as I would tell it, and then writing it as my character would tell it. When I did that, I started remembering all of the differences between us, in how I see the world and how she sees the world, in what she prioritizes versus what I prioritize (her personal interests are vastly different from mine). I came away with a stronger sense of who she was, and now I can slip into her skin again.

It feels nice to get back to work.

I used the last week of October, when I was sick, to start reading a bunch of comics, and I tripped and fell into a hole I haven’t quite climbed out of yet. I mean, it’s not interfering with my schoolwork; it was for about a week, but only because I was in a perpetual state of groaning and wondering why I had to think about my homework when I could be thinking about superheroes! And that was stressful, because my work is hard enough without the added impediment of me really not wanting to do it.

But I have a handle on my infatuation now. It’s exactly what falling hard for a person is like (all the songs make sense!) except with more fiction. And this has always been a part of who I am, how I think. I almost wrote a college application essay on fanfiction. I’m hoping to build a career on understanding fans and being fannish. So for now the thing that gets me going is superheroes, and maybe next year it’ll be something else.

Why superheroes? Well, superheroes tend to have super-issues, whether or not they’re thoroughly messed up on a personal level, and it’s sometimes cathartic to hash out things that are bothering me, or have in the past bothered me, through the lenses of people who routinely have to deal with much, much worse, and keep going anyway.

I also wrote a bunch of second-person pieces, none longer than 900 words, that are very, very loosely fanfiction, and I think they’re some of the prettiest things I’ve cranked out in a very long time, if a little morbid.

If you told lies, here are three you would tell: there is nothing about your body that you would change; you are not in love with a ghost in a man’s clothing; you have never dreamed of dying in your sleep.

Superheroes, man. Who knew they were so inspiring?

Just a quick word on this one, since there’s not a ton to say yet, but I auditioned for MIT’s annual production of The Vagina Monologues with a self-written piece, and I got in! This will be my second time in the Monologues and I am so stoked to be a part of it again. My monologue isn’t finished, so I’m not going to tell you what it’s about, but as of right now it’s titled “Dear Benedict Cumberbatch.”

More on this situation as it develops!

Final project season is in full spring, and in one of my classes, 21L.706, or Studies in Film, has somewhat lax requirements. That is, what we have to do is very clearly mapped out—a ten-page paper and a twenty-minute oral presentation—but our topics are complete wild cards.

The focus of the class was basically “film adaptations of books, plays, and other films,” so our final paper topics can be on… anything in that sphere, whether it’s a deeper dive into an adaptation we’ve already examined or a completely new adaptation entirely. Which is amazing! Our syllabus already provided us with rich material for this project—as you can see below—but most people elected to go the route of doing something fresh. 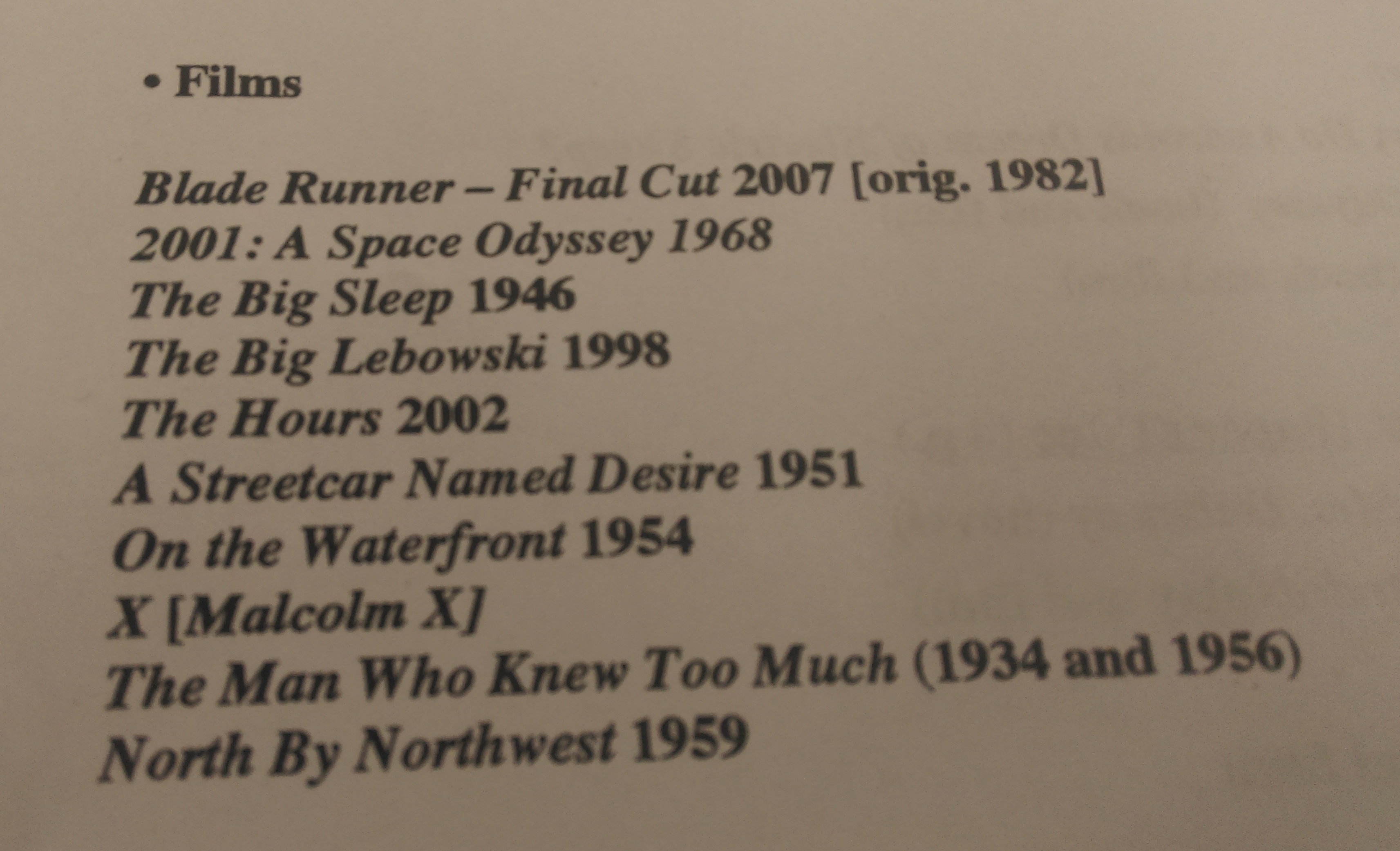 We had our first round of final project presentations this week, and they included:

Obviously these topics were reflective of the interests of the presenters, but everyone did a good job of tying in legitimate analysis. I love thinking critically about the things people love. College!

As I mentioned at the top of the post, the Asymptones had a joint performance with MIT’s improvisational comedy group, Roadkill Buffet, last week. (For an idea of what Roadkill Buffet does, check out the long-running improv comedy TV show Whose Line is it Anyway? Similar stuff.) It was our first time doing a joint show with them, so we were both winging it a little, and in the end it went fantastically. The auditorium was so packed that people were sitting in the aisles.

We alternated brief song sets (ours) with improv games (theirs), culminating in a giant game of Freeze Tag that we both played together. It was a formula for maximum humor. The Asymptones and RKB have a similar comedic energy, so we amped each other up. The event only lasted an hour, but I was smiling for the rest of the weekend, and I received a ton of positive comments from people who had been introduced to the Asymptones for the first time via our collaboration with RKB. (Personally, it was my first time seeing RKB, and I laughed so hard I cried twice. Not exactly conducive to singing, but man, did it feel good.)

And that’s the October-November highlight reel. See you again soon, hopefully not in a month. c:

As always, I am followable on the Tweets.