Except we have 11 houses instead of 4.

Hey friends!! I wanted to drop this brief blag here because I WAS SO EXCITED WHEN I SAW THIS HACK YESTERDAY. 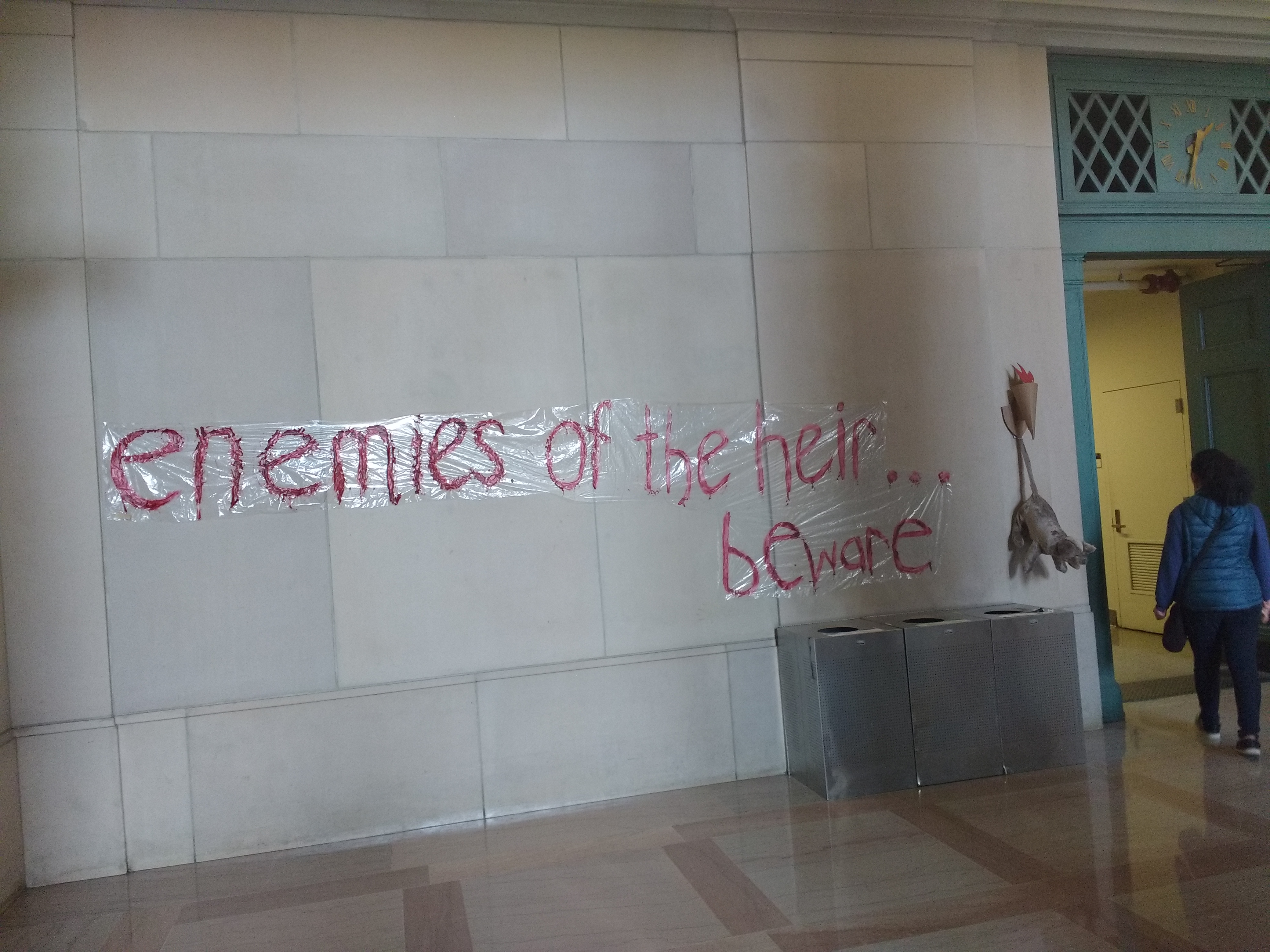 For those of you who may not have known, I am a *gigantic* Harry Potter nerd. I am one of those people who can name quite a few of the hundreds of really unimportant characters (such as the authors of Hogwarts textbooks) and have an intense appreciation for The Marauders. I reread the individual books often, and just this past summer I reread the entire series for the first time in a while. I was dripping with nostalgia by the end of it–Harry Potter was very much my childhood! I went to all the book premiers and dressed up as a witch and ate Bertie Botts Every Flavor Beans and even Drooble’s Best Blowing Gum. I have yet to visit Harry Potter World, sadly (it will happen!).

For those of you who are not as Potter-oriented, this hack is the scene from the second book and movie, The Chamber of Secrets. After a series of mysterious petrifications, Harry and the squad discover a bloody message on the wall, as well as a petrified Mrs. Norris (the cat). They’re trying to figure out who (or what) is behind it all. 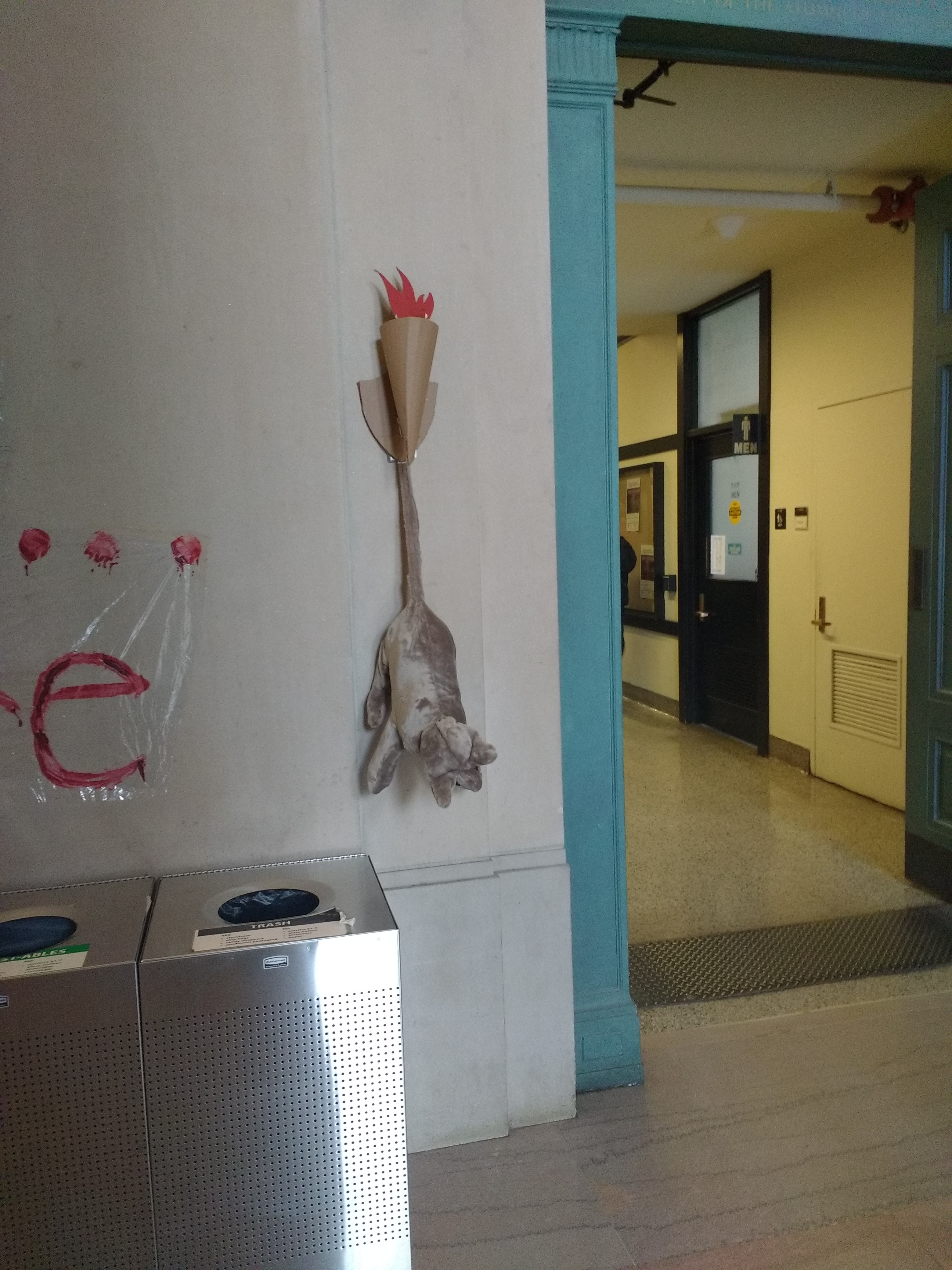 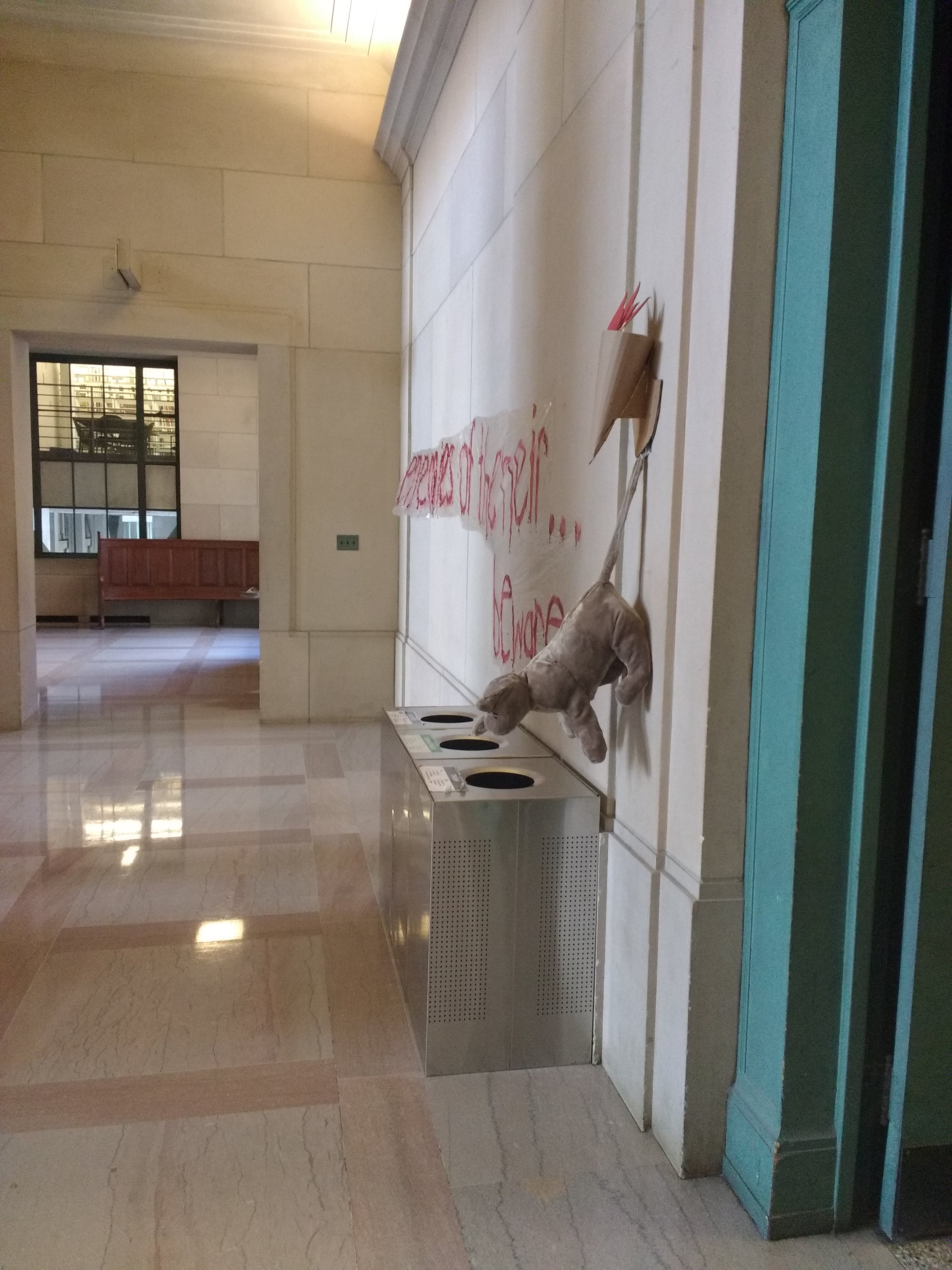 (Note: This is a stuffed cat–no animals were harmed in the hacking of this hack.)

Anyway this completely and totally made my day and my Halloween, and I think is now officially my favorite hack ever of my time at MIT thus far. It may not be the most elaborate, but to me it’s still the most exciting!

Additionally, although I never posted it, I completed a little mini-hack of my own after Night Market, an event held by MIT’s Chinese Students’ Club, Asian American Association, and Association of Taiwanese Students. We had a ton of balloons leftover from our decorations that night. 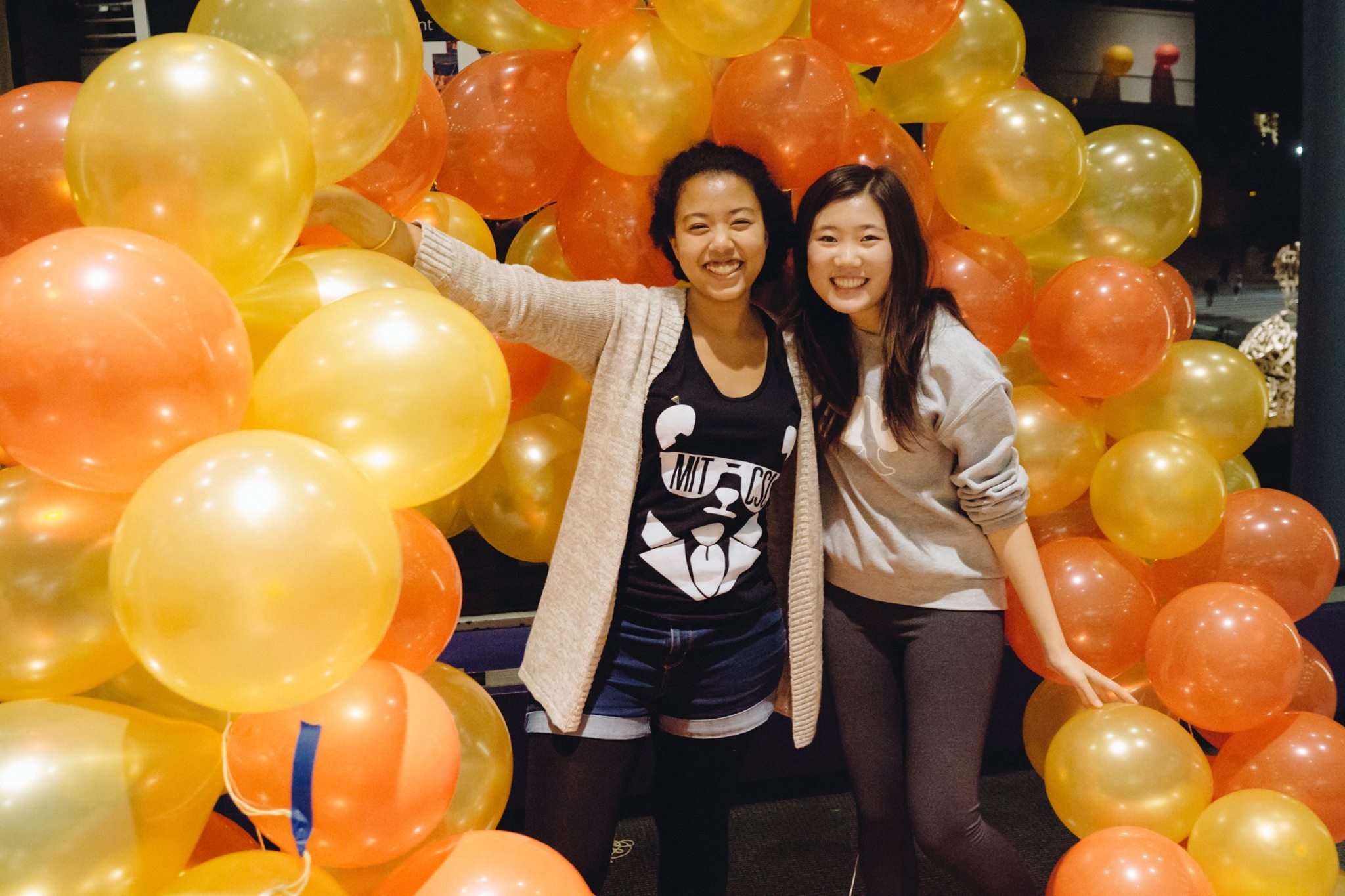 (so many balloons! Also shoutout to my friend Amber G. ‘18)

So I tied them to The Alchemist sculpture outside of the Student Center, because I thought they would make him look much happier and also like he was holding them. 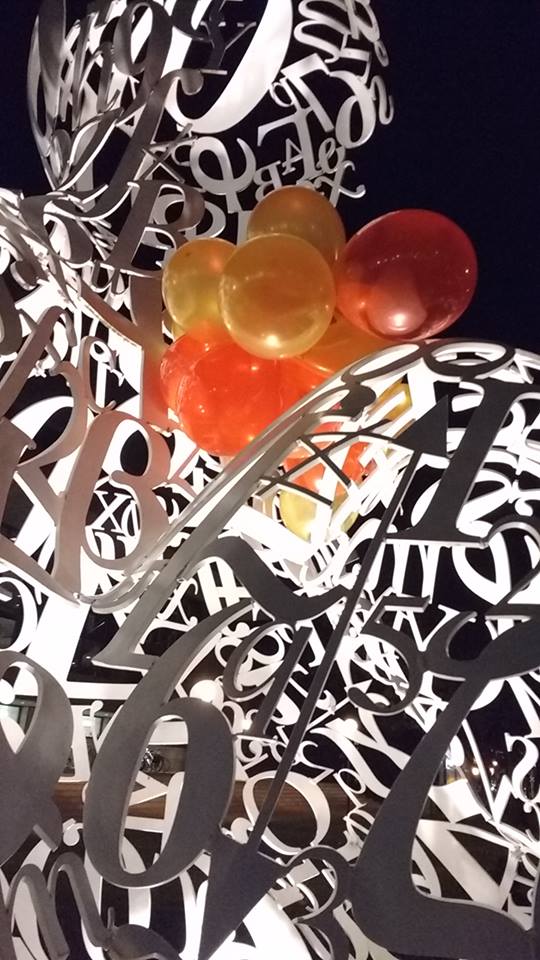 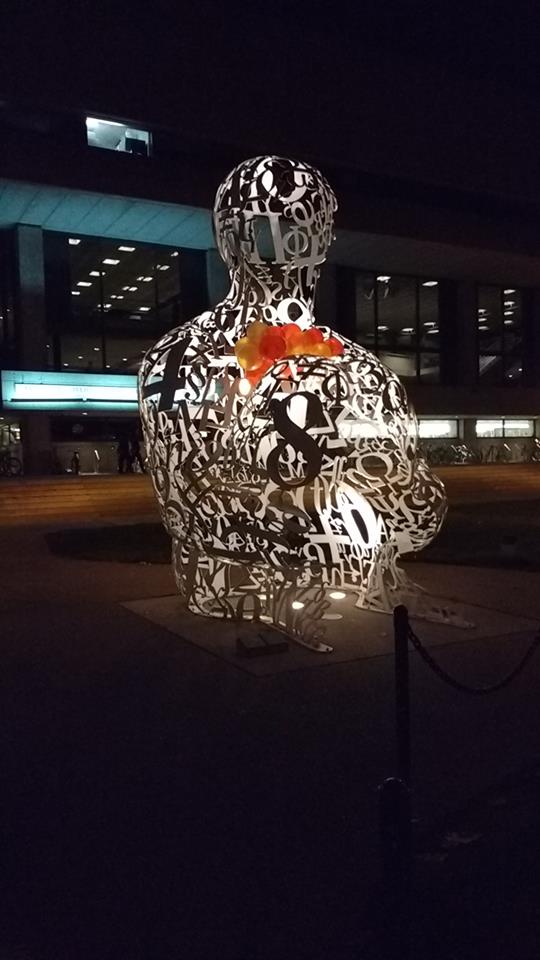 Amber thought they made him look slightly like his brains had fallen out onto his knees (which is true) but I still thought it was pretty. At least he has golden brains!

The balloons were taken away after morning, but I was happy to hear a couple of my friends saw them that night, lit up by the light of The Alchemist.

Hacks are great, and I should pay more attention to them. Despite actually going to MIT, I only really got the details on the Back to the Future hack and the MIT Zoo hack by reading the blogs rather than experiencing them for myself. I’ve been so caught up in racing to get all my work done this sophomore fall that for a time, I was a no sleep zombie wandering the halls of our Institvte, and have since learned much about self-care (more on that later).

October has ended, November is here (cue winter!) and soon the cold weather will finally arrive. I’m much looking forward to it actually–I like sweater weather and hot chocolate and snowflakes and cold wind and being comfy inside.

But until then, I’ll try not to look anything directly in its eyes…. 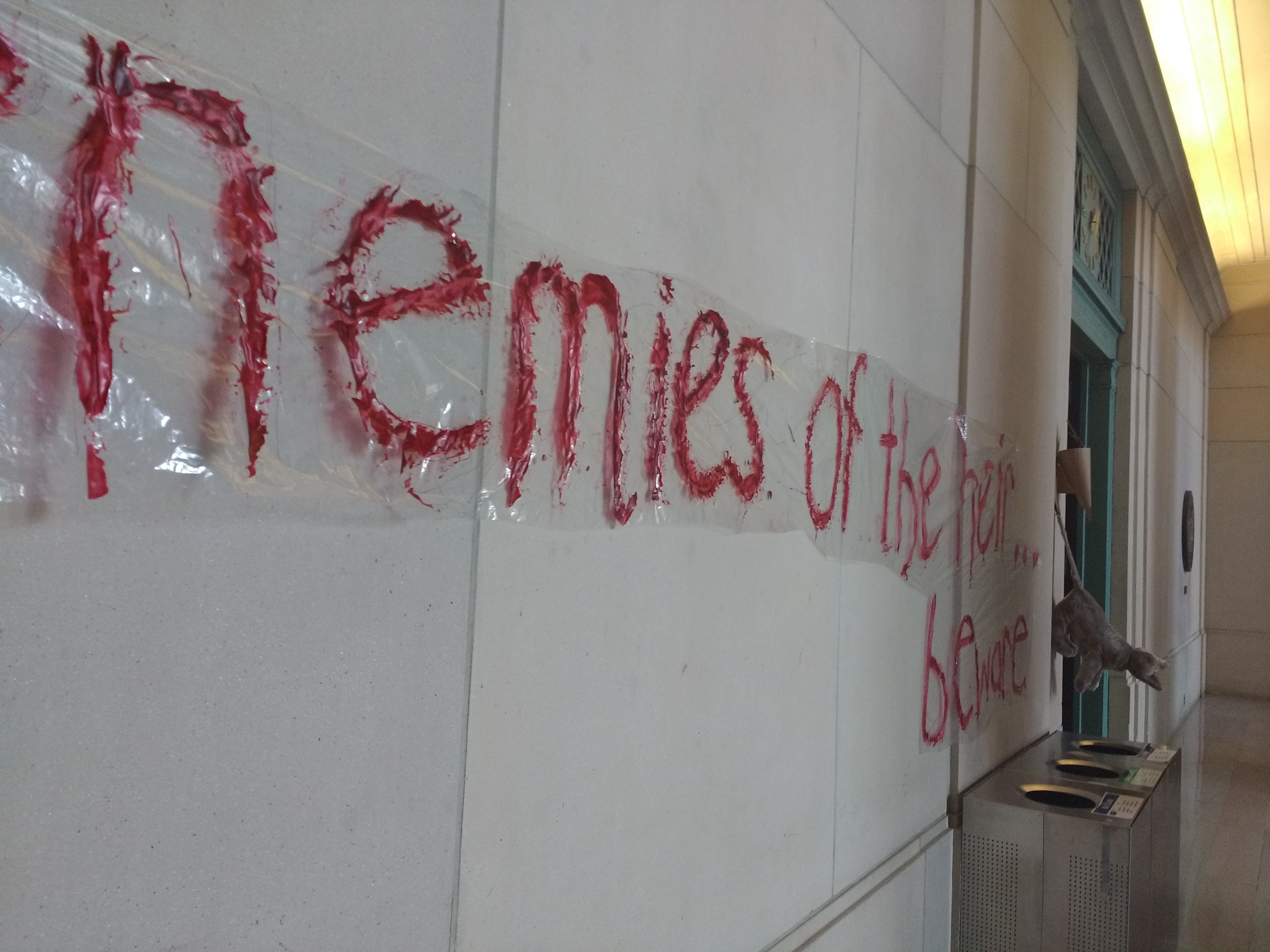