After Graduating by Selam G. '18

From beyond the veil :O

Hi everyone! It’s good to be back here, on this familiar platform but very different website. I’m so not used to it that I still drafted this post on Google Docs as I always did, though our new platform has a fancier back-end I could have used (unbeknownst to you all).

The last time I put up a blog post on MIT Admissions was about one year ago. I really should have come back before then–I owed Chris a blog about the time I went to San Diego Comic Con to talk about the Riri Pi Day video, but away I stayed. This is analogous somewhat to real life–I still live in Cambridge, just a few blocks from campus, but intentionally keep the little distance I can manage. I have a fear of appearing too crufty, so while I keep in touch with current undergrads I was already friends with, I intentionally try not to make any new ones, and though I could still be more involved in some of my former student groups, I intentionally seek different and new activities. I felt it was important to feel a little separated in my new, “adult” life, precisely because I live so close to where I had just graduated from. 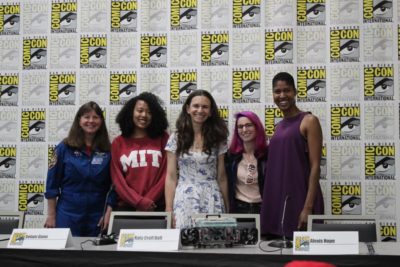 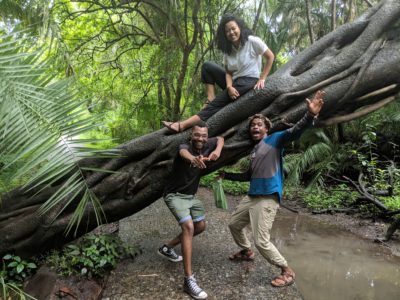 Myself on the tree, Bothabo on the left and Elvis on the right. 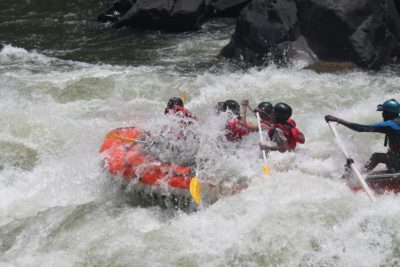 I like to say that I think about this time of my life as the night you’re invited to a party, but you’re kind of sick, and so you say no and go to bed instead, despite the FOMO. It was a hard decision to choose Triton over yet another enticing, chaotic, and (likely) incredibly stressful startup. But I felt that I needed the space and time to think. A lot of things had been called into question my first year after school–even my love for robotics. I realized what I am most driven by is impact–I care less about the work I’m doing itself, and more about the impact it will have, on the world, on the communities I care most about. That is why I still think of the Muti Water Project as my biggest accomplishment. I joke about my ongoing “quarter life crisis”, but I’ve also been seriously looking into how I can get back, how I can go back–doing Fulbright in Ethiopia as a way to ease myself in, for example, or following other MIT startups in various African countries, or sometimes in the middle of the night I am seized by an urge to buy a ticket to Johannesburg and never look back. I have a lot of FOMO–about not being at a startup, about not being somewhere on the African continent, about still being in the US (especially after coming back from Shanghai), but I’m exercising some self-restraint.

I also needed the work-life balance of my current job to take better care of myself. This year, I started doing yoga 4 times a week at 6AM and began learning aerial acrobatics twice a week (one lesson and one open practice session). This is not something I talked about on the blogs a lot, but I’ve struggled since middle school with body image (what woman hasn’t on some level, really) and have felt empowered by doing exercise and eating well for the abilities I gain, rather than appearance. It’s cool to be able to get stronger, to do tricks in the air on silks, to feel more powerful, all without focusing much on inches or pounds or reflections in the mirror.

In the spring I attended the MIT Africa Innovate conference thanks to my friend, the esteemed Pelkins A. ‘18 who I featured in “[email protected]: Cassava Connection”. There I was excited to meet so many different people working on projects and startups throughout the continent. I also met Joe Shields, the founder of EthioChicken. Joe is a white American from the midwestern United States who started the largest industrial poultry farm in Ethiopia, which now serves multiple East African nations. I have tremendous respect from him, and he was very kind and gave me his contact information. But simply the fact that he was who he was–someone with no Ethiopian background, with no connections to Ethiopia or to Africa–and still did what he did, was inspiring. He was a humble and respectful person–he described his startup journey very realistically, as hacking together something, with a lot of wrong turns, that, with enough patience and hard work, eventually turned into something sustainable. Even after MIT and realizing the only thing to fear is fear itself, I still plague myself with fears–that maybe people will not accept me as Ethiopian, that maybe I don’t speak Amharic well enough, that maybe, for those reasons, I am more likely to fail. Joe was the perfect counterexample.

So it’s been a year, and counting. Becoming a working adult is the process of realizing that life is both unfathomably long and terrifyingly short. Life is so long that you must fill it with things you enjoy, with purpose, with a reason for getting up on hundreds and thousands of mornings, a seemingly endless slog of days ahead of you. Life is too short, frustratingly short, so short that it seems impossible to accomplish anything actually significant, to exert any impact on the world, before the brief flame of your efforts is extinguished.

I’ve thought a lot about what I want to do in the future, and lived hundreds of possible lives while lying awake at 2AM. I lived a life where I get a masters in robotics and hop around companies until I find a breakthrough one whose culture I enjoy, exerting my impact by making technological innovation applicable and useful in the real world, advocating for minorities in STEM fields all the while. I lived a life where I move to Ethiopia and start a coffee processing business, selling to independent roasters in New England and then around the world. I lived a life where I go to business school and use my background in supply chain robotics to do supply chain management, maybe also integrating robots in the process, or using that to make African manufacturing hubs both efficient and ethical and “retiring” as a consultant for various startups.

I lived a life where I write a memoir about the mixed experience called “Ghost Girl” and ask my favorite Chinese-Jamaican artist to illustrate it.

I lived a life closer to the near future, where I do a Fulbright project in Ethiopia for nine months and then move to Denmark to work at Universal Robots before deciding on grad school.

I lived a life where I become a successful music blogger and manager, bringing underground artists from the African continent to perform in the United States, and “retiring” to run a cafe/venue/community space in Cambridge that exclusively sells Ethiopian coffee, has performances and poetry slams in the evenings, and can be booked by students and nonprofits at a free or greatly reduced rate.

I lived a life where I joined the media lab and did seminal research in robotics for performance art, using robots as creative tools for concerts…

There are many, many more.

Mostly what I have discovered is that I struggle to balance my many different interests and my moral obligations. I feel I have a moral obligation to my family and the greater symbols and systems beyond them–unlike most of my peers, even including those who have ties to developing countries, I have close relatives who live near the global poverty line. It was only after meeting so many international students while in college that I realized my father’s journey was a miracle. It would still be a miracle, today and thirty years later, if someone from his hometown made it to college in the United States.

This comes with a sort of survivors’ guilt and other feelings of urgency, fear, and uncertainty. I don’t think I will be able to be at peace when I’m older if I don’t use at least part of my life to try to address that broader issue–at least trying would be enough.

For the next year and a half or so, I plan to keep trying to find a direction. Though I will say that adult life is less stressful day-to-day than MIT, it’s forced me to address broader existential questions that I am still working through. But one thing that I am certain about is that I will never, ever regret getting an undergraduate education in engineering, even if I do something completely unrelated. As I wrote about in “Fight Fire with Fire” my freshman year, MIT was an incredible training ground, and it trained me to think and problem solve. It gave me a very concrete set of skills I can point to, and a set of skills that, frankly, will always be a cushion to return to if I decide to do something crazy and it doesn’t work out. It’s definitely not for everyone, and not everyone will agree with that philosophy, but it worked well for me and in this nebulous time, it is one of the few things that feels real and true.

I know that I can take that wherever I go next.

Now that I’m a Real Adult, I write mostly on my own blog, medium.com/@selamjie . You can also find me on selamjie.tumblr.com, twitter.com/selamjie, and this weird lifestyle/skincare blog I have called tryingmyvest.com (like I said, I have too many interests…)