hot chocolate as a panacea by Mel N. '24

navigating through a chaotic first week

I landed in Boston on a cloudy day about a week ago, and…it sure has been A Week™.

Freshmen aren’t invited back to campus this semester, but I’m renting an apartment in Cambridge with two other lovely frosh—shoutout to Selena and Sarah—mostly so I can spend some time away from my parents and get to know other people within a pandemic pod. It’s really close to campus, actually. Like, so close that I get this breathtaking view out of my kitchen window every day, featuring the moon, the Charles, and the Boston skyline: 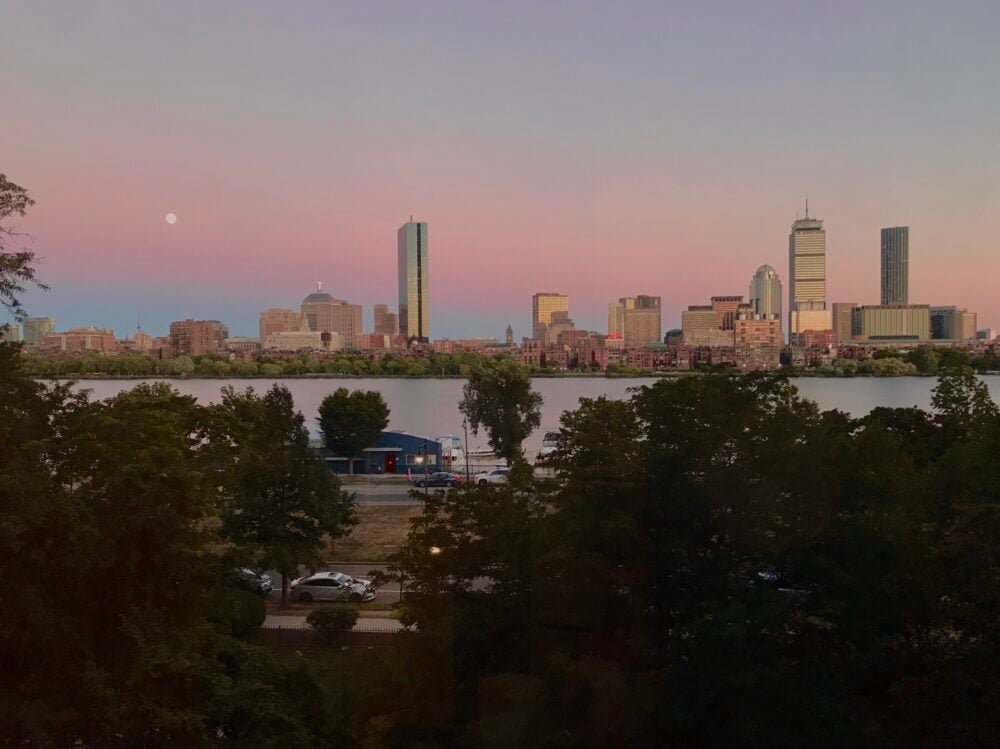 it’s so pretty i could cry

Whenever I’m studying at the kitchen table and I look out at the river, I feel like I’m in some sort of cliche coming of age movie.⁠01 i watched lady bird (2017) a few days before i left for boston, and i cried...a lot. the complex mother-daughter relationship in that film and lady bird's entire journey—that really hit home. highly recommend. It really is magical. Interacting with humans outside of my family has been a well-needed breath of fresh air, and my roommates are wonderful.

Except I barely had any time to appreciate it all before I plunged deep into the pits of Zoom University.

On top of setting stuff up in my apartment (unpacking, buying groceries and necessities, figuring out laundry & chore rotations & shower schedules etc.), I had to register for classes, move my schedule around, and get ready for the semester to actually start, all in the span of two or so days.

Needless to say, it was stressful. New problems kept coming up and I was basically playing whack-a-mole with the way I was dealing with things. I originally signed up for 21L.015⁠02 children's literature with 21L.004⁠03 reading poetry ranked second for my HASS class. I got into 21L.004 and decided to remove myself from the waitlist for 21L.015, but then I had to figure out how to switch sections from afternoons to evenings because it conflicted with my 18.01A lectures, which involved many panicked messages sent to my associate advisor Hanna as I wrangled emails and the registrar. They were super helpful through the whole process, though, and it (somehow) worked out!

Then I got slammed with work for all the rest of my classes: 7.015, 8.01L, and 18.01A.⁠04 introductory biology with a focus on modern trending topics</p> <p>physics i that covers material over a longer interval that goes into iap</p> <p>calculus i, but squeezed into six weeks instead of a full semester

The first two weren’t so bad this week, actually. I love biology and I’m thinking about majoring in 6-7, which is CS and molecular bio, so 7.015 is a good time and I like that it’s a smaller class, with about 70ish people. 8.01L is a similar situation: it’s smaller, and even though physics is probably my least favorite science, Pablo is a great professor.

Last month, I did not do so great on the math diagnostic for a variety of reasons. I got a 5 on AP Calculus BC in high school, so I was expecting to get credit for 18.01 easily, especially since most of the upperclassmen I asked on Twitter said that the diagnostic would be fine, but it was not fine. I definitely cried about it afterwards, and then I dealt with the residual sadness by not responding to anyone for a week and playing a LOT of Maplestory.⁠05 my favorite game when i was growing up, and also the subject of one of the sample posts i wrote on my blogger app

I still signed up for 18.01A, though, thinking that since I had a decent background in calculus, I would be able to get through it quickly and move on to multi-variable calc without any hitches because relearning is a faster process than learning.

The first 18.01A lecture was already a lot to handle, and the first assignment on MITx almost made me cry multiple times. Here’s a graph I made after I finished, with great difficulty: 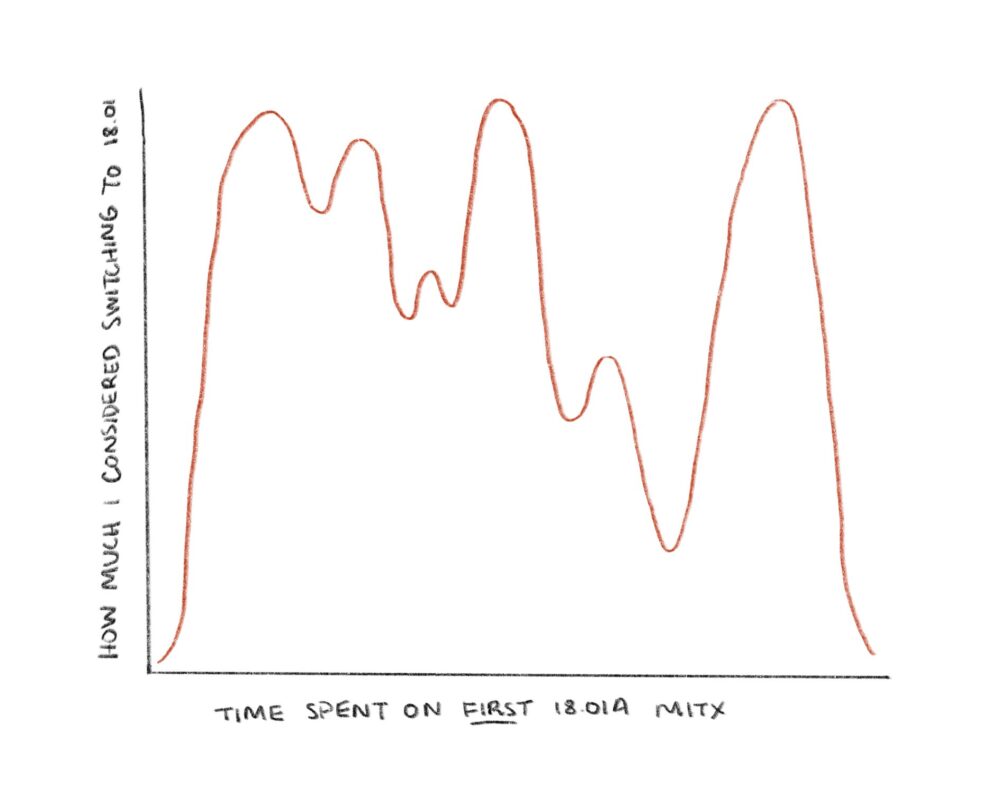 Then the second lecture came around, and I was PMing my friend Daniel⁠06 we share a lot of classes together, actually. 7.015, 8.01L, <em>and</em> 18.01a, at least before i switched out. it's definitely nice having someone to bother in dms during lectures on Zoom during the lecture asking him whether I should drop out, because I had no idea what the hell was happening. Plus, I had a strong feeling that I should try to get a more solid foundation in calculus at MIT.

I texted Cami about this, because she went through a similar situation last year. Thirty minutes later I submitted my add/drop form to my advisor and shot an email to the 18.01 professors to tell them I was switching in.

Danny now has to struggle through 18.01A without me, but I’m rooting for him! He sent me a video of him sadly crossing my name off of his pset document during 8.01L and I had to struggle not to laugh because my camera was on.

Through that first week, I kept myself afloat by eating ungodly amounts of sachima, since Selena brought over two huge bags. It’s kind of like a Chinese Rice Krispie, made with fried batter and a sugary syrup. I don’t really know how to describe it, but it’s amazing.

Hot chocolate was also a lifesaver.

Towards the end of this summer, I started drinking it every night because I quickly found that it was a great way to make myself fall asleep. When I came to Cambridge, I made it a couple times with my roommates, except Selena is lactose intolerant so we had to use oat milk, but it still turned out pretty well. And then we got lactose-free milk, which I didn’t know existed, but it tastes exactly the same as normal milk.

I think making and drinking hot chocolate can be considered a form of witchcraft, actually, because it works magic on me, instantly making me feel more centered and relaxed. It reminds me of home: summer nights spent talking with Quinn, my friend from high school, staying up way too late drawing fanart of characters from Chinese webnovels.

With the help of hot chocolate, I got to Friday, finished my first week of classes at MIT, and breathed out a huge sigh of relief.

Saturday was amazing, show-stopping, spectacular, incredible. Saturday made me feel like a Real College Student. It was a dream. I spent the first few hours of it drawing stuff late into the night to work out my creative braincells and take a break from academia, which helped so much, honestly. I finished coloring my last doodle at 3 a.m. and felt this sense of peace settle down around me as I plugged my iPad in and turned out the lights.

I woke up at around 11 a.m. and caught up on all the things I missed in 18.01, which I’m really happy about! I’m lucky that I switched early on in the semester—I didn’t have too much late work to make up for and I finished everything in about three hours. Larry and Sanjoy seem really chill, too, so I’m looking forward to the rest of this class!

In the afternoon, I took an Uber for the first time in my life (it was a slightly nerve-wracking ordeal) for socially-distanced hot chocolate at LA Burdicks. Then we went over to Pokeworks to grab some food, sit outside and just talk about MIT things. It was a really good time. By the time we left, I was brimming with pure happiness and social energy. I also spotted Jeremy (the AO), which was wild.

That energy carried me through the rest of the night as my roommates and I wandered around Harvard Square. We ran into a girl just as we were crossing the street to go to CVS and she asked us if we were Harvard kids, to which we responded that we were actually MIT kids, but we exchanged Instagrams and it turns out she knows AnaMaria, my friend from ISEF 2019! It’s a small world out there. We met three more Harvard students when we were buying groceries from Wholesome Fresh, and I’m kind of in love with the way the universe works in Cambridge—how you’re probably just a few connections away from the strangers on the streets.

So, to sum up: things started out a little rough, but I think I’m on my way to getting the hang of it now, and I hold firm to my belief that a good cup of hot chocolate can solve anything.

I’ve included my hot chocolate recipe below if any of you would like to try it. I am by no means a professional chef or chocolatier.⁠07 some of my classmates definitely come close, though. there's a channel in the 2024 discord where people can send pictures of their creations, and oh my god, allison and danny could probably sell their food/desserts at bougie restaurants. This is just what I like best from experimenting over the years.