I’m surprised that no one’s written a blog post about this before; the closest thing is this paragraph on Wikipedia. This was originally going to go out just before CPW, but that got canceled, so… Anyway, here’s your orientation, in the literal sense. This is what the campus looks like. It’s mostly a long strip: 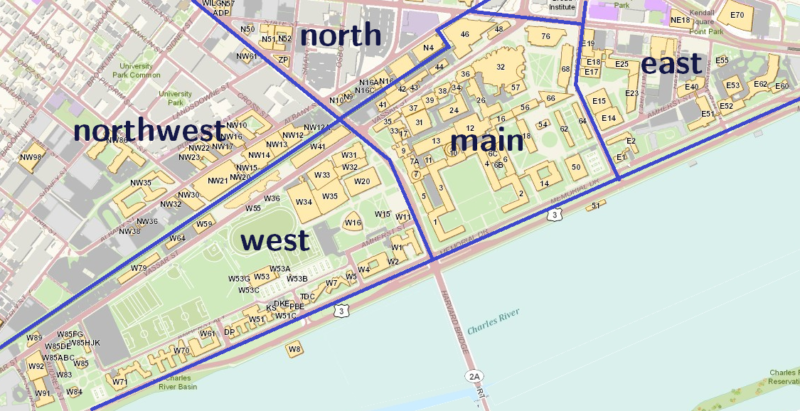 There’s west campus on the west, which has the dorms, the student center, and most of the athletics buildings. There’s main campus, which is the pentagon in the center; most activities will take place on main campus. There’s east campus on the east, which has some administrative buildings, MIT medical, and Sloan. (Here, east campus is a group of buildings, not to be confused with the building that has the name East Campus.) Then there’s north campus and northwest campus.

Rooms within buildings are written like 2–190. The number before the dash tells you the building, which is Building 2. The leading digits after the dash are the floor number, which is 1, the first floor. A floor number of 0 is the basement. The remaining digits indicate the specific room. Since most hallways within a building don’t branch off, room numbers typically increase in one direction. 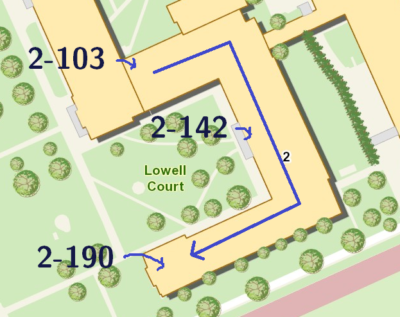 Another fact is that odd room numbers and even room numbers are always on opposite sides of hallways. Because of that, once you know where the building is, it’s usually easy to locate where a specific room is. So once you know where the building numbers are, you can navigate your way around MIT! We’ll start with Building 10, which you’re probably familiar with from all of these MIT pictures: 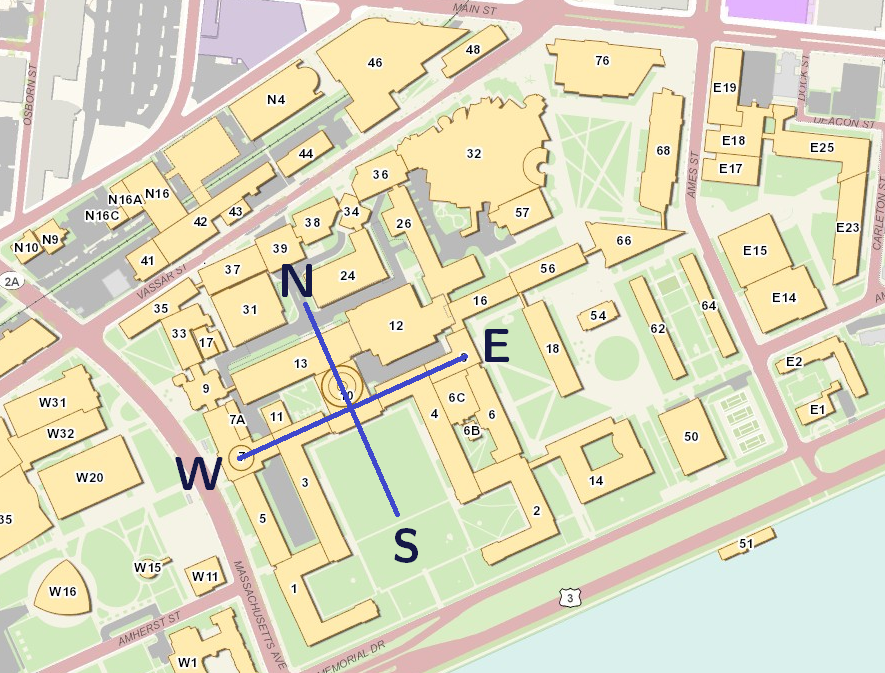 The west–east line we just drew is the Infinite Corridor, or just the Infinite. It starts from Building 7, which is an important MIT landmark, and branches off in the end at Building 8. It’s a pretty important hallway for navigation. Most of the rooms along the hallway are administrative rooms and labs, so you likely won’t have any classes along the Infinite, but it’s a good idea to get familiar with it. It is in fact not that long, so it makes no sense to me why it’s called the Infinite. 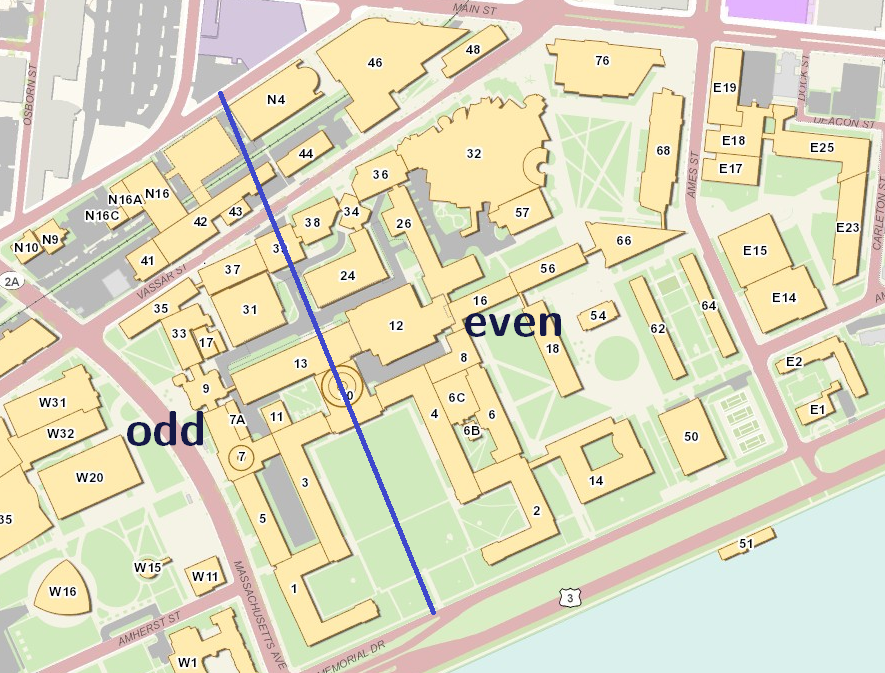 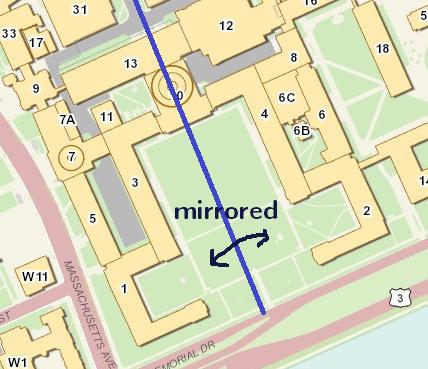 The most important thing to note about the building numbers are the buildings that end with 6. Buildings 6, 16, 26 and 36 all lie on one straight north–south line, in that order, and if you continue that line across the street, you get to Building 46. Branching off from Building 16, you get Buildings 56 and 66 in a single west–east line as well, which acts like an “extension” of the Infinite. These are pretty important buildings to remember because they can help you figure out where the rest of the buildings are. 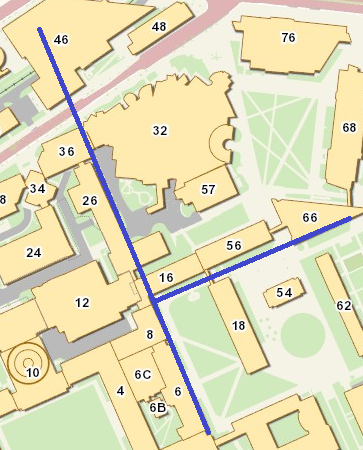 Buildings that have the same tens digit are roughly located in lines, except for the tens. There are only two buildings in the twenties, Building 24 and 26. The Building 30s are all in a straight west–east line, passing through Building 36. Again, remember that odd numbers are west of Building 10 and even numbers are east. Building 32, in particular, is more often called Stata; it’s one of MIT’s landmarks because it’s huge and weird-looking. If you cross the street, the Building 40s are also in a straight line, and in fact going in increasing order from west to east. 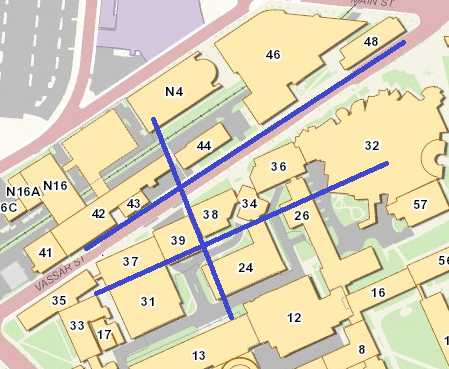 Finally, the Building 50s and Building 60s are aligned in roughly north–south lines. It’s important to note that many of these buildings often don’t get called by their building number. Building 50 is Walker, where you will probably take some exams, and Building 54 is the Green Building. It’s the tallest building in Cambridge, so it’s also an MIT landmark. Buildings 62 and 64 are called East Campus, despite being located in main campus. (Again, East Campus the building is different than east campus the group of buildings.) 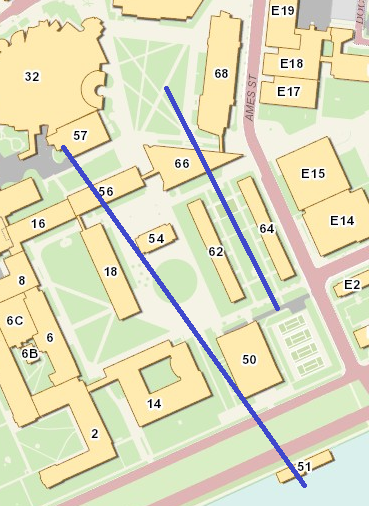 Alright, that’s it. I wrote a Sporcle quiz so you can test yourself on the building numbers on MIT’s main campus. Have fun.