We have football, pistol, fencing, and TKD. . . but did you know we also have skydiving???

Hello again from out in the real world!  It’s been a little more than a year since I’ve graduated and I’m happy to report that real life isn’t as difficult as I thought it would be. Just pay your rent on time and don’t spend more money than you make and things tend to work out.

Unfortunately, I’ve picked up a new hobby that makes that second rule a little more difficult.

In the summer between sophomore and junior year at MIT I did my first tandem skydive while I was back home in Oregon.  I didn’t tell my parents, I just went with a bunch of friends, shelled out the cash, got strapped to a skydiver, and was pushed out of a plane.  It was AWESOME!  I didn’t even mind that there was a malfunction on our main parachute and we had to cutaway and deploy our reserve, I was too busy being on sensory overload :)  My parents weren’t really excited that I’d gone skydiving but they were glad that I’d had fun and were also glad that I was still alive.

I did some checking that semester and discovered that MIT had a skydiving club!  More checking revealed that the drop zone (standard name for the airport you skydive at) was about an hour away and accessible only by car.  My research also revealed that getting your skydiving license costs about $3.3k.  I decided that due to time and money and because of a lack of vehicle I should probably hold off on skydiving for a while.

Fast forward to, oh, about 2 months ago.  As I sat in my apartment watching South Park I thought to myself “Why am I not skydiving?  What’s stopping me from just going ahead and getting my license?”  As it turns out, nothing was, so I called the DZ, asked a few questions (how many jumps does it take, how much does it cost, is it self-paced, etc etc) and registered for the 6 hour ground training.  A week later I found myself sitting in a classroom with 4 other guys learning the finer points of how to not die when jumping out of an aircraft. 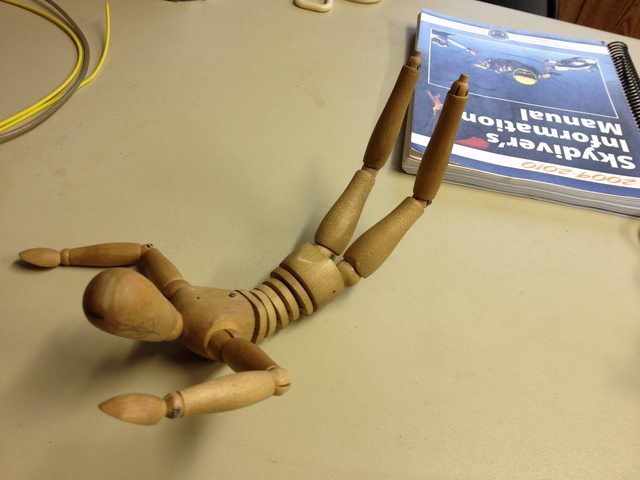 I was also curious about how they were going to teach me to recognize and react to various malfunctions that could happen.  The solution was pretty clever.  They have point-of-view photos printed onto big sheets that they hold above your head while you wear a practice harness.  You look up, recognize the malfunction, and then have to react appropriately.  We did this over and over, to the point that theoretically I won’t even hesitate if I look up and see a big ball of snot flapping around above my head.

We practiced body position, exit procedure, pull priorities, malfunction recognition, altitude awareness, and all sorts of other things.  By the end of it I was ready and anxious to actually jump out of an airplane – which I did.

I got all dressed up in a student jumpsuit (bright purple, lovely), helmet, clipped a radio to my chest, was gear checked a million times, and made my way to the airplane with the two instructors who would be jumping with me and holding on to me during freefall.  That’s right, your first skydive towards your license isn’t a tandem, you jump out all by yourself and are responsible for pulling your own chute.  The instructors just hold on to you and give you hand signals to help correct body position during freefall.

The ride up to 13.5k feet was awesome – I went over the jump verbally and in my head, touched all of my handles to help record their placement into muscle memory, and then made my way to the door when the red light came on.  Up the door went and we checked our spot by looking out the door.

I can see my house from here!  See the little red light?  That means look, but don’t jump. 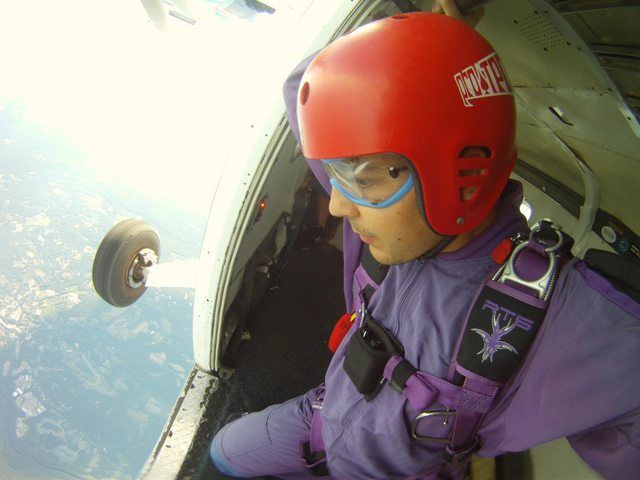 The light turned green, I climbed into the door, got nods from my instructors, and then WOOOOOOOSH!  GAAAHHHHH!!!!!!!!  Freefall, guys, is AWESOME!  I did all of my jump requirements, followed the hand signals given to me by my instructors, pulled my chute at the correct altitude, and soon I was drifting pleasantly under a big orange parachute :)

The radio on my chest crackled to life and gave me instructions on where to go and what to do, gradually talking my down and helping me land.

The next 25 jumps blurred by. 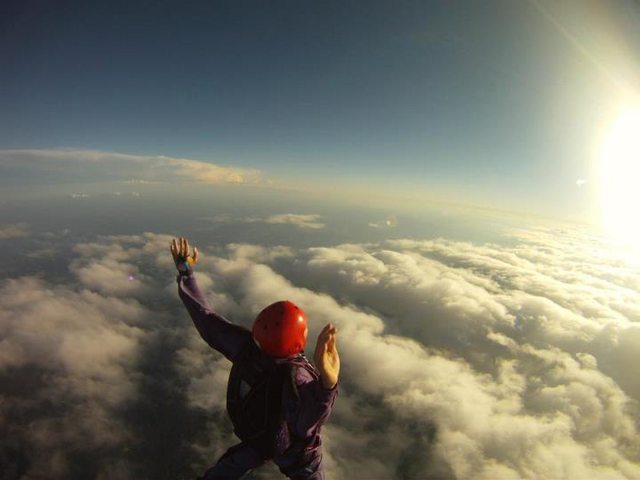 Soon I was jumping with just one instructor holding on, then one instructor who didn’t hold on, then by myself, then from a low altitude.  Some jumps went great, others not so much, but all were extremely fun.

What exactly happens on a jump that’s “not so great?” you may ask?  Well, I happen to have a nice series of pictures that shows you.  Here’s what happened:  When you pull your chute you are supposed to be stable and falling with your back facing upwards.  This allows the parachute to come out of its container and inflate above you.  During one jump, as we neared our pull altitude, I went a bit unstable and instead of taking a deep breath, stabilizing, and then pulling, I decided to pull regardless of stability.  Technically, this was the right decision, because the priorities during freefall are 1) Pull, 2) Pull at the correct altitude, 3) Pull while stable.  Anyway, I pulled, and I knew I was unstable so I mentally prepared myself for whatever nightmare might occur.  I felt something bump into my left foot and almost knock my shoe off and then, before I knew it , I was upright and under canopy.  No crisis, no injury, no nothing, YAY!

On the ground I got debriefed by my coach.  Apparently I pulled while facing straight down in a dive.  That thing I felt bouncing off my foot was the bag that holds the canopy.  A lot of things could have gone seriously wrong BUT, nothing did and it was a great learning experience.  Smiles all around!

After 25 jumps I did my check dive to get my license.  I had to jump out, locate my instructor, go up to them, grab their wrists, back off, spin 360 degrees, do a front flip, and then pull while stable.  I did all of those things and had a pleasant and uneventful canopy ride back to earth.  That’s when I got nervous.  Ty, one of the coaches, comes up to me as I’m headed back to the tent for debrief, comes up to me and says “Dude, Nadya (the instructor on that jump) is really upset with you.  You landed fast and easily could have broken a leg.  You need to give her some time to calm down before going to see her.”

I turned left and started walking dejectedly to the hanger in order to put my gear away.  I made it about halfway there when I heard yelling behind me.  “It was a joke!  Come back here!”  Then there was all sorts of cheering and congratulations – I passed!!!

And then I got pied.

It’s tasty at first.  Then it smells like spoiled baby poop :( 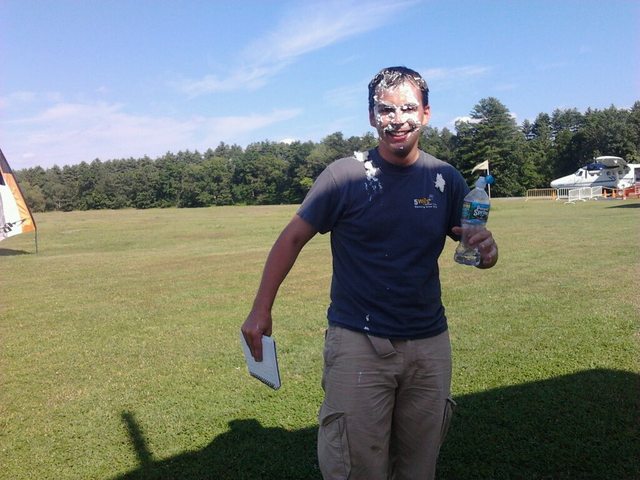 Now I can jump all by myself!  I also get to buy my own gear and do whatever I want, no coaches or radio necessary :)  I’ve been spending a lot of time at the DZ and soon realized that the MIT skydiving club is alive and well.  I’d completely forgotten about it, but one day I realized that half a dozen jumpers were all sitting around and I was hearing key words that clued me in on their MIT ties.  “. . . Course 3 . . . 3d printer . . . Central . . . all-nighter.”  Apparently the club fell apart for a while but in March it was re-established and is now going strong again, which is awesome!  Technically I’m not a grad student.  Actually, no technically about it, I’m just not a grad student, but I like to think of myself as an honorary member of the MIT Skydiving club now since I at least went to MIT and now skydive.  Their facebook page claims that “Club membership is open to all MIT students, staff, faculty, and affiliates, as well as to members of the Cambridge and Boston community” so there you go, I’m in!  And you could be too!

I spend most of my weekends now jumping out of airplanes and learning more and more about how to control myself during freefall.  It’s an awesome hobby and if you are at all interested and think you’ll have the time/money/transportation, definitely check out the skydiving club.  Also feel free to ask questions in the comments, I’d be more than happy to answer them.  If you’re here over the summer and have the cash then it’s really easy because you aren’t worried about PSETs and such.  You can slam through the 25 jumps needed for your license in about two months if you just go on weekends and the weather cooperates.

No more purple jumpsuit, yay!  And, a fancy full-face helmet.  Movin‘ on up! 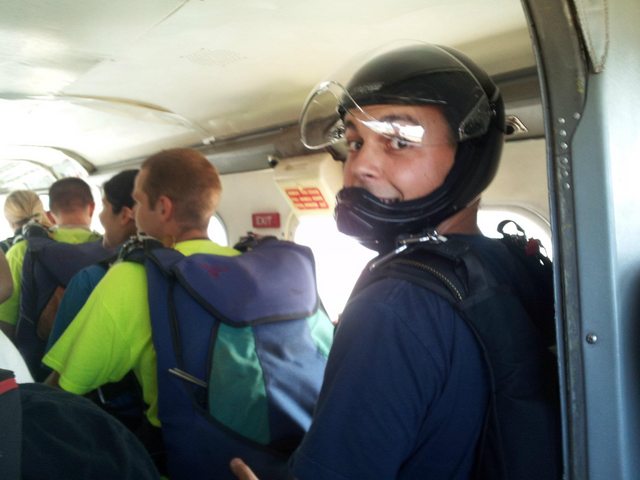 About to push some friends out of the plane 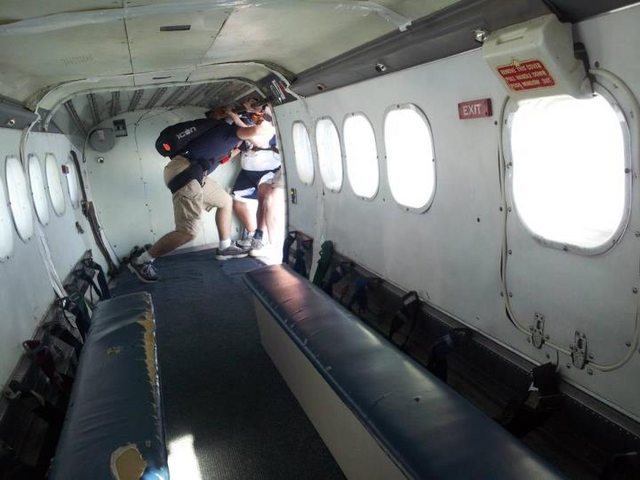 I kept seeing all of these blog entries about “How to . . . ” and wanted to contribute one of my own (even though I’m not discovering pulsars), so here you are!  How to skydive: just go do it!  A bunch of prefrosh on the MIT 2016 Facebook group bought tandem tickets and you should too!  We’re making a trip in September to the DZ and we’re all going to go have fun jumping out of planes.  We jump at Skydive Pepperell, shoot me an email if you want to come and I’ll make sure you know when it happens.  Also, remember, during MIT and even after MIT, you aren’t in high school anymore and the freedom to do whatever you want on a whim is a freedom you shouldn’t ignore!  Want to go eat hamburgers for breakfast?  Go ahead.  Want to take a bus to NYC and spend a Saturday there?  Go ahead.  Want to join a skydiving club?  Do it!

Taking advantage of the freedom you’re afforded in college is one of the coolest things you’ll experience.  I remember one day I skipped 18.02 lecture and just cooked (and ate) bacon.  Why?  Because I wanted to!  Awesome.

Another time I found a pool noodle so I dressed it up with googly eyes, a nose, and a santa hat.  I then bought a clay pot and some potting soil, planted the noodle in the pot, and put it on Susan Hockfield’s front porch.  Why?  Because.

One day I took a bus to NYC to be a part of an improv everywhere mission, which was one of the best memories I have from senior year.

Don’t restrict yourself from doing things that seem silly or different just because you’ve never done them or because they’re out of the ordinary.  Now’s the time to do those things!

Do your work and keep up in your classes, but don’t be afraid to do something just to do it.  As Ms. Frizzle would say, take chances, make mistakes, get messy!