How to Write an Original Song by Powers '23

*Please excuse the shoddy audio quality/audio balance throughout the post. I just had a laptop, phone, and the microphone on some earbuds to work with :)

1. You’re bored, so you do what you always do when you’re bored: You dick around with your guitar. This has become a pretty intense hobby in the past few months; whenever you have a moment of free time, you’re sitting there, jangling something out. Since quarantine started, you’ve written 17 original songs, ranging from absolute flaming garbage to (at least in your opinion) pretty great. It’s nice and cool outside, so you go to sit on the front porch, amp and all, to annoy the neighbors that you now have because you’re not living in the middle of the woods anymore. You have no clue what you’re doing, but you never really do. But then you play a little something that hits you the right way.

2. Congrats: you’ve found a thing. Without writing anything down, you kind of just start singing along. It’s alright? Your sister seems impressed, but you know the lyrics you’re coming up with right now aren’t your best. You keep singing freestyle though, because sometimes you manage to get a line, or a verse, or a piece of a melody you really like. And you do! It’s “When did you get a sliver of the moon in your eyes?”. Aw, that’s pretty cute. Maybe it’ll be a mushy-gushy song? That’s not super abnormal for you. You use love, romance, relationships as a framing device all the time; feelings are complicated, but they always seem a little less so when you bounce them off of another person, even if that “person” is a metaphor or completely made up. We’ll see where it goes.

3. You wake up the next morning and grab your guitar. You write it down: When did you get a sliver of the moon in your eyes? It still has a nice ring to it. Loosely playing along, you start to knock out some more lyrics… 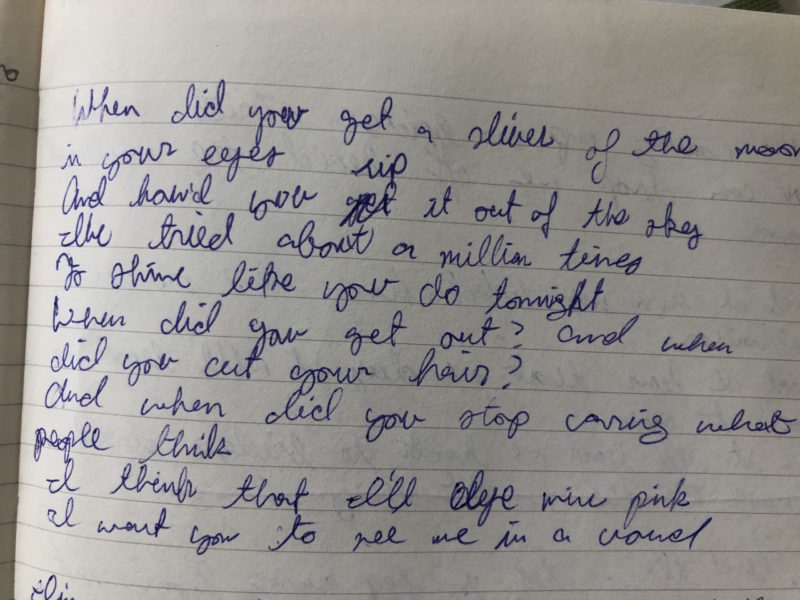 When did you get a sliver of the moon in your eyes/And how’d you rip it out of the sky/I’ve tried about a million times/To shine the way you do tonight/When did you get out, and when did you cut your hair?/And when did you stop caring what people think/I think that I’ll dye mine pink/I want you to see me in a crowd

4. And you hate it now. It’s so on the nose, so cliche. You abandon all of it and start over.

5. A half an hour passes and you think you have a snippet of something that works. A verse and a refrain? You play it out all together and take a voice recording so you can really listen to it.

6. After listening a few times you decide that it’s okay, but not great. A few lines stand out to you, they strike a chord inside of you. You take a mental note of them: “we’re coming up on Bridge street/you can drop me off behind the railroad sign”, something about tickets, something about roads and driving, “it’s a lot to walk away from”. To you, it’s becoming pretty clear that Maine is the backdrop for whatever story you’re carving out, but not the “Maine” you decided to leave. The Maine that’s beautiful, quiet, peaceful. The Maine that was like heaven when it snowed. That material is workable, but you don’t know how just yet.

7. Those ideas stew in your head for a day or two. You don’t touch the project during that time; you learned awhile ago that old material has a way of sneaking its way back into the creative process as long as you keep moving forward. Eventually you pick the guitar with the intention of writing a new song. Since you’ve pretty much abandoned the old one, you decide to reuse some chords, but those chords take you back to the same ideas: driving, Maine, heaven. There were some moments that felt like heaven in Main. Actually, there were a lot of moments this whole school year that felt like heaven. BUT you grew up Catholic, and you know that a lot of the memories you’re thinking of wouldn’t be considered very “heavenly” by religious standards. I mean, *clears throat* you are a gay.

Even the most wholesome moments of attraction you experience would be considered wrong by the world you grew up in. You’re not sure why you’re thinking about that right now, but regardless it’s dancing around the back of your brain when you start singing. It sounds really good. You pull out your phone and write down everything you sing in your Notes app; you know you don’t wanna lose these lyrics.

8. You finish writing the whole song pretty fast. When something feel right, it just flows out of you. After listening to a voice recording over and over and OVER again, you decide it’s passable. It’s good, even. You have finished the song, minus some tiiiinnnyyy tweaks that no one will notice but you.

9. It’s late that night, and the piano is glaring at you from across the room. You haven’t played it in years, but what if…?

10. You give it a go on the piano, and your sister literally runs into the room: “That’s my favorite one of all of them so far!”. You’re not sure if you agree with her, but you know it has some spice on the piano. It’s much more intense, and maybe you like that? Ok then, it’s a piano song.

11. You practice. You fine tune. After trying a few titles, you finally name it “Bridge Street”. You decide to write a blogpost about it. You actually decide to film yourself playing it and for some reason you put that in the post too, even with a few pitchy moments and voice cracks and hesitations you’re all too aware of. What are you thinking? Well, music is for sharing, so maybe that’s what your thinking.

So yeah, that was how I wrote this song! It took me YEARS to land on a writing process that clicked with me. Honestly, I’ve been trying to write music since about, what, 6th grade? And I only started finding anything even resembling consistent success about a year ago. I really really believe that anything worth getting good at is also worth being bad at. I had no vocal training, no guitar lessons, a few years of piano lessons when I younger. Now I low-key have plans to maybepossiblynopromisesomgdontholdmetothisitsjustapipedreamPERHAPS self-release an album *theoretically* called Highway Mythology. It’s currently ten songs long with the addition of “Bridge Street”, and the run-time is over a half an hour in total. Who knows? Life is too short to not at least try, and whether or not it’s any good I’m proud of it. Once I have a more polished project I might do another post about what it’s like to write an entire album.

Without further ado, here’s “Bridge Street”! Thanks for listening <3 (also at the end I give this look to the camera that kinda says “my soul has left my body and I am a shell” but it’s just because a low battery notification came up lol)