I Never Thought I Would Join a Sorority by Selam G. '18

To all of you who are wondering how in the world you will navigate the social aspects of college, first of all, chill. I have received so many questions about making friends in college that I even wrote a blog post about it.

Many of you may be thinking about mitigating this issue by joining a student community, most notably greek life, the entire goal of which is community-building and fostering social interaction.

If you are like me, you never ever thought ever that you would ever join anything remotely close to “greek life”, or in my case, a sorority, in college.

If you are like me, then you thought “greek life” had a bad reputation, especially for us nerds. In particular, as a multiracial woman, I had the preconceived notion that many sororities were racist, and I didn’t want to have anything to do with some kind of social elitism or strange social hierarchy on top of academics in college, which are already difficult. I never thought that joining a greek organization would be helpful in any way, if anything, I believed it would be a hindrance.

Truly, I cannot speak for other schools. It is entirely possible that many sororities and fraternities at University X do have all of those problems, like this frat.

But I will say that after coming to MIT, my opinions of greek organizations were honestly changed a lot.

As many of you might know, I had a rough freshman year (kind of everyone does in a way) in particular because I was incredibly homesick. It’s not that I struggled to make friends at MIT, but more so that it was hard to develop strong bonds with people, and I was never entirely sure that if we weren’t in the same dormitory or class or otherwise convenient space close by, we would still be friends. I remember one of my friends articulating this well, saying one of her fears in college was that she would not make any real life-long friends–that she would just pass through here and go, without real connections with others.

Some people fill this need for a tight-knit community in their dormitories or in clubs, but while I certainly liked the people in my dormitory and became close with many of them, I still felt like I was missing something. During my sophomore fall, I heard about a new sorority coming to MIT. There was an increased demand for greek life, specifically sororities, on campus, and so the MIT Panhellenic Association (which Ayomide F. ‘18 from the Pi Day video is president of, btw) was bringing on a new group. To make a long story short (one for a whole other blog post) I joined as a founder, and along with about 30 other women, founded the MIT chapter of Delta Phi Epsilon. 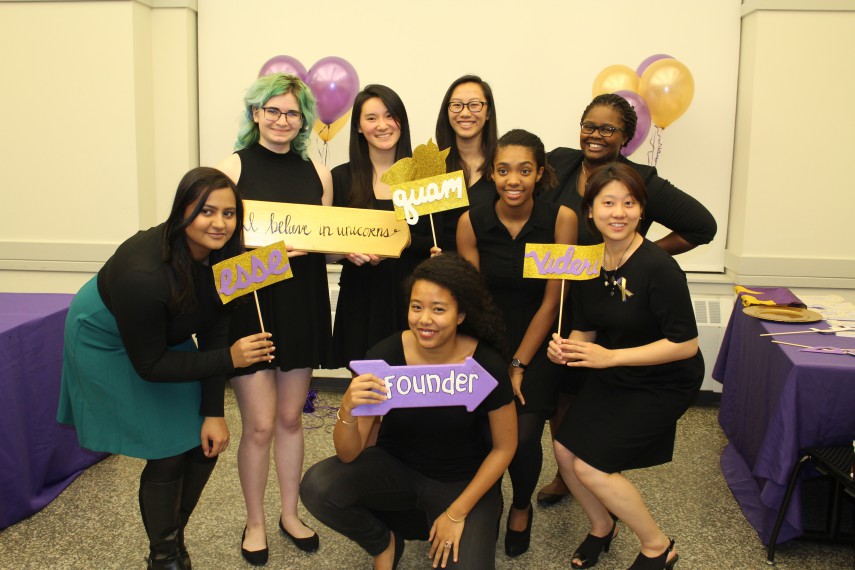 I really had no idea how I got there. Just two years ago, if you told me that I would join a sorority in college, I would laugh. But at the end of the day, MIT students are, first and foremost, MIT students. Any organization on campus–a cultural club, a floor of a dormitory, a career or academic club, and yes, all the greek life too–is still made up of MIT students, and so the culture of those groups is still fundamentally MIT-y, which makes it unique and different. At the end of the day, fraternities and sororities at MIT are just another way to find a community of cool MIT students, and sometimes even ones that might be broader and more diverse than clubs that focus on a particular skill or interest. Several bloggers are in fraternities or sororities, including myself, Erick P. ‘17, Joel G. ‘18, Alexa J. ’20, and Kevin S. ’19.

I think one of the things the fraternities and sororities at MIT struggle with is precisely this misconception–had I not, by chance, been passing by a booth in Lobby 10, I probably still would not be in a sorority. I don’t know if I would be unhappy, but knowing what I know now, I wouldn’t give up the community I have for anything. As a freshman who suffered from homesickness, having DPhiE feels like having a family away from home. Whenever anything happens, whether it’s drowning in work, needing a calculator for an exam in the next 10 minutes, struggling with issues with my actual family, getting sick, existential crises, and everything in-between, I know I can go back to a group of people who won’t mind if I need to rant or vent or share with them.

Rarely do I feel like I can really be 100% myself around people, especially when I’m not feeling great. It’s easy to be around others when you’re happy, but sometimes I just feel like locking myself in my room. The people who support me and check on me in these situations have overwhelmingly been my DPhiE sisters, and it’s felt like a huge relief to be able to rely on them no matter what condition I’m in, sick or stressed or sad. I didn’t know that was the safety net I needed until I had it.

But it’s not all gloom and doom, although I find myself appreciating those harder moments a lot. I’ve also had a lot of fun with my closest friends in the sorority too, like just this past spring break, when I went on a trip to Barcelona with two of them, Virginia A. ‘18 and Kayla T. ‘18. Trips abroad with close friends in college are something I’ll never forget, and something I really will cherish and remember forever and ever and ever and ever and ever :3 Being able to do that is simply all the good parts about Adulting, the parts that I forget about while I’m in school or job-searching (blehh). 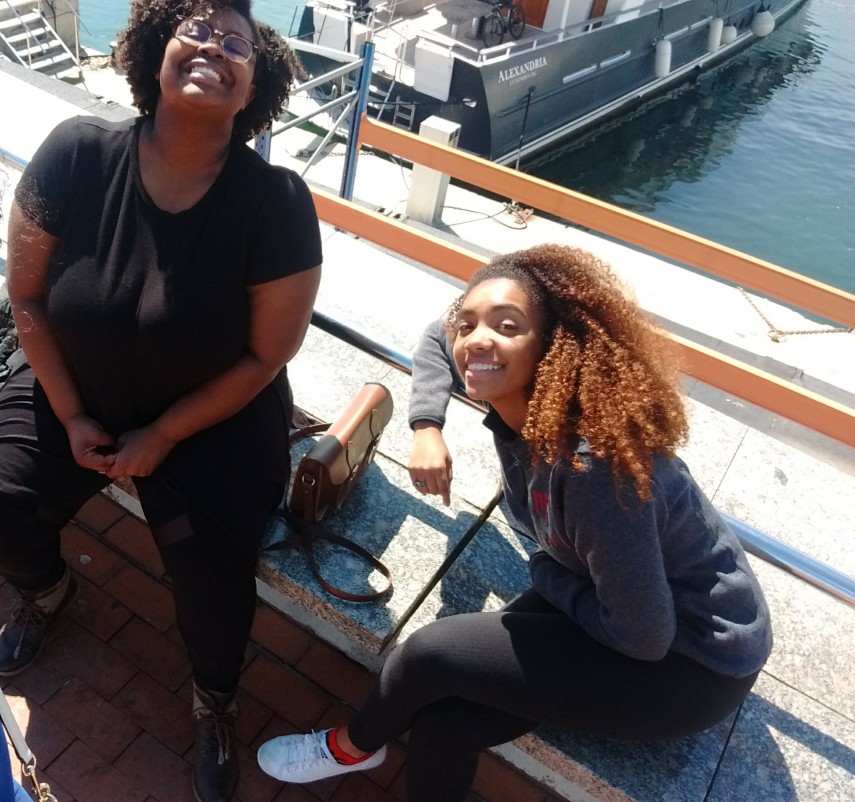 A photo I took of Kayla and Virginia while in Barcelona!

I think there are many places around MIT that allow you to find a great community, but the point of this post is that I hope you recognize greek organizations are one of them. After all, about 45% of MIT undergraduates are in a greek organization. And no matter where you go to school, I would keep an open mind. Especially remember that for any organization, the local culture of the school dictates much more than stereotypes do. It’s variations in that culture, in what people value and believe in, that will contribute to variations in all the different communities. I’ve been incredibly happy in the one I found, and I’m so glad I had the chance to be part of it! 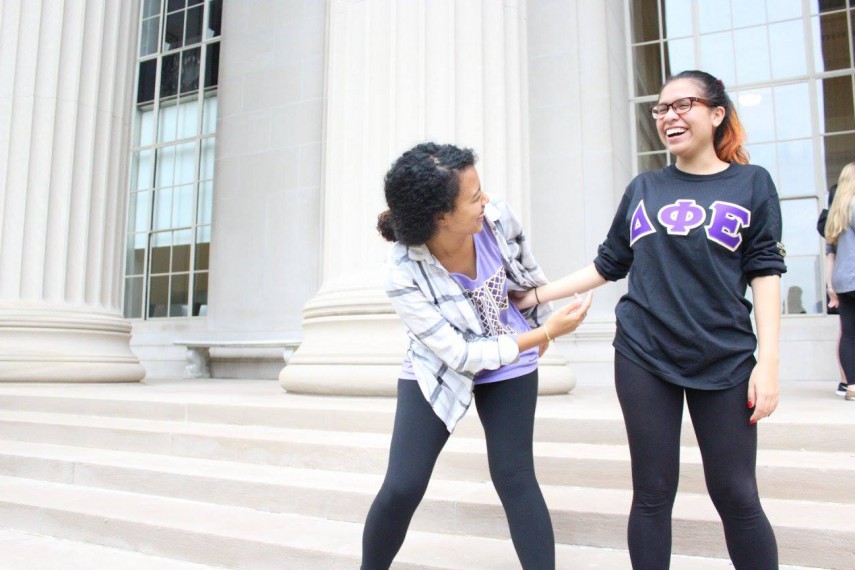 Myself and my “twin”, Brianna B. ’17 who will be graudating this year and part of our first senior class for Delta Phi Epsilon! We’ll miss her <3

Here’s some more information I have on sororities at MIT: