time to catch up

First off, I’d like to thank everyone, especially you, my readers, for the surprising amount of support and encouragement over the past few weeks. I couldn’t begin to fathom how many other people are going through the same thing I am and it’s both humbled me and empowered me. My post “The Pretender” reached 6,000 views in less than a month and has been inducted into the Best of the Blogs, a great honor and my second post to do so after “MIT: The Sunsical“. And my follow-up post, “The Lessons I’ve Learned“, is quickly rising up in views to join its brothers with over 2,000 views in four days. It’s funny, I had thought that to garner views, my posts would have to be elaborately creative and quirky, like my older ones where I photoshopped things in creative ways, i.e. “My Two Cents“. However these last two posts were just me typing furiously on a keyboard for a couple hours about the unbridled stresses of life and then hitting publish after only one or two revisions. And people really like that. So I ask myself whether I should do more quirky elaborate posts or continue with these posts of deep introspection and then I thought of the question I always ask myself when presented with a choice, “Why not both?” When I started blogging, I wondered for a while what my “writing style” was, thinking that it’d be consistent throughout all of my posts. But as I’m going through old blog posts, I can see how my writing style was all over the place and how it slowly has grown and changed over time and I’m excited to see how it’ll develop further.

IAP. The month of January. Independent Activities Period. The month where members of the MIT community teach each other anything and everything. Many say that the best time to be at MIT is when semester classes aren’t in session, and I agree. IAP is a much more relaxed period of learning where you can take month long classes, do research, externships, sports, chill around, and more. Last night I came back to MIT and felt a quick jolt of sadness from leaving home after the holidays, but I felt better after telling myself I’ll be seeing them again soon since I convinced my brothers to apply for Spark in March. Once I opened the door to my room in my fraternity house I felt like I had come to college for the first time. I haven’t seen my room in a while, I’m much more relaxed after these two weeks, and I’ve finally gotten a grip on understanding my learning style and can’t wait to unleash it this IAP and next semester.

I’ve made coding my theme for this IAP. Last year I was rejected from every UROP I applied to and I suspect it had to do with my lack of coding experience. So this IAP I’m playing catch up to be proficient in at least one language and to get some good projects under my belt. Here are my plans:

During IAP, there is a class taught called “Intro to Python”, a recommended prerequisite to 6.01. I wasn’t able to take it last year and I struggled through 6.01 with Python until I got the hang of it. So this year, I’m going through the class but on OpenCourseWare. That way I can do it entirely on my own time, hoping to solidify some of the things I’ve learned in 6.01 and to get down some more Python concepts so that I can say I’m proficient in Python by the end of IAP.

The RingComm2017 website is currently under development and needs to be ready soon, so I’ve been trying to catch up with my much more competent partner on web programming to make it a good site.

Last IAP I took a one day workshop taught by Microsoft on how to program games using Unity. Then as the following semester hit, making games became less and less of a priority. I haven’t touched Unity since. I’m going through everything I learned again and hopefully will be able to publish a game soon.

Finally I have time to blog more! I’ve been keeping an Evernote list where I have some pretty good blog ideas.

Lastly, and most importantly, I’m doing Momentum, an interdisciplinary design class. This year they’re partnering with the NSF Center for Sensorimotor Neural Engineering, who focuses on improving lives through the connection of the brain and technology. We do lectures in the first week and then we’re broken up into groups to create a project that address the theme. We’re even given lab space to work on our projects and then on the last week we present our projects to actual industries. The course is also full of mock interviews and internship opportunities. I love it because I haven’t done anything of that scale before. The thought that after the class is over I can say “I made such-and-such thing that’s controlled through neurons from your brain and solves such-and-such problem” excites me. 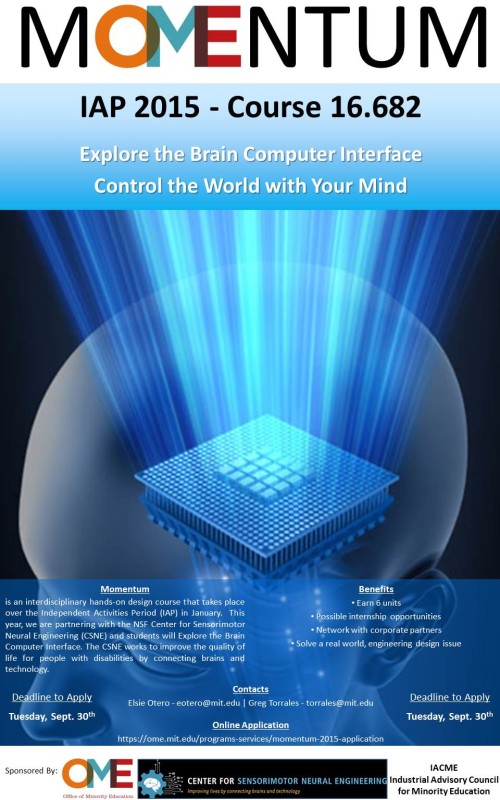 The next few weeks are going to challenge me to learn quickly, and I welcome that challenge. I learn best when under pressure. In the proverbial pool of knowledge, if I stand on one side and dip my toes in slowly, I’ll find the water wayyy too cold and quickly back out, taking forever to get in. But if I jump right into the deep end and force myself to learn, I find I’m capable of doing things I never thought possible.