In honor of blog post number \(6283 \approx 1000\tau\), I’ve decided to do a post dedicated to my favorite number. Here, \(\tau\) (the Greek letter tau, usually pronounced to rhyme with how but some people rhyme it with law) refers to the superior circle constant, \(\tau = 6.283… = 2\pi\). And I cannot help but tell you about the glory that is tau, alongside a few anecdotes about tau, MIT, and myself c:

proof that this is the post number i claim it was

Note: This section gives an introduction to tau from the ground up. The only thing needed to understand everything is calculus, but if you haven’t taken that yet, this section should still be accessible⁠01 in this section, moreso than anywhere else in my blogs, you will see my teaching background come through. i love teaching things (have taught at middle school math camps and one-off classes many times), but haven't done it enough recently even with just algebra/geometry (hopefully). Much of the material from this section is drawn from Michael Hartl’s The Tau Manifesto. I encourage you to read it for a deeper, more involved read about tau!

Pi, or 3.14159…, or \(\pi\), is perhaps the single most iconic mathematical object. From the t-shirts with pi to Pi Day celebrations on March 14th to the Simpsons, even. Pi is a number that relates two important parts of circles: their circumference (length around the circle) and diameter (length across the circle). The ratio of every circle’s circumference to its diameter is exactly pi: in other words, \(\pi = \frac{C}d\).

all diagrams are drawn by yours truly on my mit ipad. i apologize for my terrible handwriting

But should we use a diameter for our circle constant? After all, most geometry classes introduce circles as

circle noun: a shape that is made of of the set of all points that are a fixed distance away (the radius) from a single point (the center)

Most notably, we don’t define a circle by the length across it, but instead by its radius — half of that. The reason for this is deeper than a standard dictionary definition: there are many shapes (such as the Reuleaux triangle) that have a constant width, but a circle is the only two-dimensional figure for which all points on the boundary are the same distance from a center.

So perhaps it’s better to use a different circle constant: one that relates a circle’s circumference and its radius.

And so \(2\pi\) gets at an even more fundamental relationship that is present in circles — the relationship between the circumference and the radius. For convenience, let’s denote \(2\pi\) as \(\tau\).

This idea that pi isn’t truly “fundamental” has been talked about for a long time. Michael Hartl wrote the first version of The Tau Manifesto for Tau Day (June 28th) in 2010. Nine years earlier, Bob Palais wrote a 3-page article titled “\(\pi\) is wrong!” in a mathematical newsletter. But before just blindly accepting that \(\tau > \pi\) (true by definition — a tau-tology, if you will), it’s important to understand other places that \(\pi\) is used besides the circumference of a circle.

If you’re familiar with geometry, you might be incredibly hesitant about \(\tau\) because of the formula for a circle’s area:

This formula, at first glance, looks much uglier with tau than with pi, with a constant factor of \(\frac12\) sticking out front.

If you’re taking a physics class right now, the form of the area equation with tau might look quite familiar to you. A few examples:

With these in mind, the factor of \(\frac12\) looks a lot less weird in front of there. But it’s not just a surface similarity: the \(\frac12\) exists in front of all of these equations for the same reason: the integral⁠02 calculus alert! but if you have not taken calc, i hope that the next section provides a fun introduction to integrals \(\int x \,dx = \frac12 x^2\).

One way to “derive” the formula for the area of a circle is by taking the areas of thin rings in the circle (imagine an onion with many layers). If we find the area of each of these rings, and add them all up together, we can get the area of the circle! 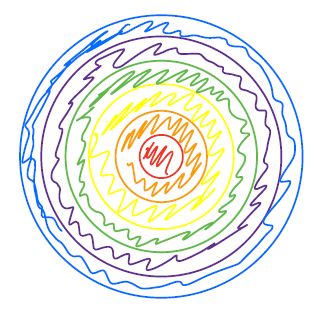 and the \(\frac12\) pops out — not by magic, but because of the power rule for integrals and the relationship of the area of a circle and its circumference.

Each of the equations above with factors of \(\frac12\) can be represented as some integral, a sum of “smaller things”:

And so now we have a second piece of evidence for tau: its use in the area formula.

Reason number 3⁠03 the highest number i can count to, and thus the final point i will be making is incredibly useful if you’re taking trigonometry/pre-calculus right now, there’s one incredibly useful reason to use tau instead of pi: its use in radians. If you’re unfamiliar with those subjects, the most important thing to know is that radians, like degrees, are a way of measuring angles, with the conversion rate \(180^{\circ} = \pi \, \text{radians}\). Below is an image with this conversion represented on two unit circles.

Radians are often troubling pedagogically; whenever you learn them, it’s often very hard to wrap your head intuitively around degree-to-radian conversions, what a radian actually means,⁠04 a radian is the “number of radiuses” around the circle that you have traveled! one full circle is exactly tau=2pi radiuses, aka the circumference and other general confusion. If someone tells you that something is \(\pi/3\) radians, how many is that? It’s a third of a semicircle, \(180^{\circ}\), which makes it a sixth of a circle, or \(360^{\circ}/6=60^{\circ}\). Lots of steps, lots of room for silly mistakes, lots of room for head-scratching.

Now consider a unit circle, but with the angles denoted as multiple of \(\tau\):

Now, the numbers make much more sense. Since tau is symbolized by a Greek “t”, we can imagine that \(\tau\) stands for “turn”; one turn around the circle is exactly \(\tau\) radians! Now, conversions between angles and degrees are easy: one-eighth of a circle, or \(45^{\circ}\), is exactly \(\frac18 \tau\). Boom, angles and radians much easier. (I still sometimes convert radian angles given in terms of \(\pi\) to \(\tau\) so that I can work with them more easily.)

Not only is this helpful for understanding unit circle mechanics and conversions, but the usefulness of tau here extends to all trigonometric functions (sine, cosine, secant, cosecant all have periods of \(\tau\)). So useful indeed c:

This section is already going on a bit longer than I anticipated,⁠05 oops, i get a bit carried away teaching things sometimes. but it's so fun! i've been considering an econ-teach-y post, one that's more rigorous than this post and teaches something that most people won't have seen before, so maybe be on the lookout for that so here’s a hodgepodge of various other places where you can use tau!

If you’re interested in more: as I stated above, the material here is largely drawn from The Tau Manifesto by Michael Hartl. I highly encourage reading through it for more tau-related arguments (with math that is deeper than this post) and rebuttals to counterarguments proposed by the Pi Manifesto (which was written in response to The Tau Manifesto :P).

Since The Tau Manifesto was published, there has been an incredible growth of support for a new circle constant. To get an idea of the scale of this, peek through The State of the Tau. Some personal highlights include:

As one might expect, an institution like MIT, home to many a math nerd, has a few fans of the superior circle constant.⁠06 not to say that there aren’t supporters of the other circle constant: a floor in east campus is named ⌊π⌋ (floor pi, and yes they are on the third floor), mit traditionally releases its rd decisions on pi day, and hacks with <a href="http://hacks.mit.edu/Hacks/by_year/2015/pi/">pi in the sky</a> or a <a href="http://hacks.mit.edu/Hacks/by_year/2001/magic_pi_ball/">magic pi ball</a> Here’s a few ways in which tau has made an appearance at MIT.

I first encountered tau somewhere around 2013, just when I was starting high school. I’m not exactly sure where, but I suspect that it was a Vihart video.

I intended for this section to be a lot longer to talk about lots of things with myself and tau: but I’m limited by the fact that 1) I entered high school literally 8 years ago, and remembering things from back then is very, very hard, and 2) I don’t have any photos from that time.⁠08 my phone erased all of my photos in november 2018. no backups means those photos are gone forever :c So instead, here’s a few anecdotes about me and tau from way back when.

I tried to pack light when coming to Cambridge this year, so my tau shirt is currently stowed away in a box back at home, alongside many other shirts that I haven’t worn in a while.  But come June 28th,⁠09 6/28, tau day c: I promise that I will be putting that shirt back on to celebrate and spread the glory of \(\tau\).