In Our Bedroom After the Pandemic by Sabrina M. '21

a bedroom is something that can actually be so personal

For most of my adolescence, my bedroom was painted as close as I could get to black without my parents becoming upset with me, and an accent wall in a deep, dark red—colors I chose as a fledgling teenager trying to develop a style. I’d had other bedrooms, before then, like when I shared a room with my sister in the Bronx, or the room I had but was often too scared to sleep in alone in the Dominican Republic. They were mine in that I had a bed there and my clothes were there, but I was so young that I didn’t have the freedom or even desire to alter it beyond my parent’s wishes. I asked for purple walls when we first moved to the suburbs and I got my own room, and suddenly the walls were lavender, along with the other decor my parents got. I didn’t need anything else.

According to the Merriam-Webster dictionary, a bedroom is primarily defined as:

a room furnished with a bed and intended primarily for sleeping.

However, there always comes a point where a bedroom becomes more of refuge than simply a room, when the four walls are the only thing left in between agonizing teenage self-reflection⁠01 do people really like me? why do i feel so sad all of the time? what do these feelings even mean? and the rest of the world.⁠02 re: prying parents For those who grew up like me, it became the first mode of distinction, of saying this is mine and this is how I want it to look. I couldn’t dye my hair, or pick my haircuts, or dress how I wanted to dress as a child, but at some point I could tape something to my wall or ask for a new wall plate.

For me, the bedroom that marked this shift in ownership was grey and crimson. Worn out posters and concert tickets⁠03 i had two tegan and sara posters up, along with the tickets to two concerts i’d been to within two years, and a crumpled up setlist i’d snagged after a show. how i insisted on having them up while i remained in the closet is a mystery only a gay teenager can solve lined the walls, and it always felt a little too dark even with all the lights on, and I slept on a twin sized bed. My collection of books—a mixture of YA novels, video game related content, and the occasional book with unknown origins—were neatly arranged by series and type on a tall, narrow, wooden shelf with a peeling veneer. When my English teacher suddenly passed my Senior year, I taped pictures of her and things that reminded me of her to the side of my dresser, overlooking the desk where I worked. Until college, this was home. A home of my creation, as broody as it made me seem at the time. 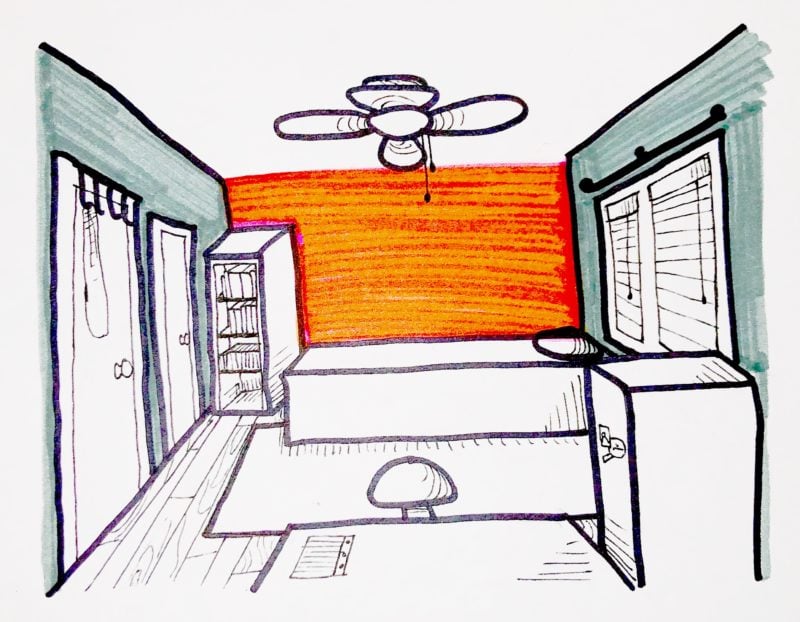 When I came to MIT and moved to Senior Haus, I accented the walls of my freshman year room with navy blue, leaving some parts white for murals and to save on paint costs. In my free MIT Orientation t-shirt, I painted an ode to Starry Night, remembering a quote I submitted as an addendum to my blogger application:

When Van Gogh was a young man in his early twenties, he was in London studying to be a clergyman. He had no thought of being an artist at all. He sat in his cheap little room writing a letter to his younger brother in Holland, whom he loved very much. He looked out his window at a watery twilight, a thin lampost, a star, and he said in his letter something like this: “it is so beautiful I must show you how it looks.” And then on his cheap ruled note paper, he made the most beautiful, tender, little drawing of it. 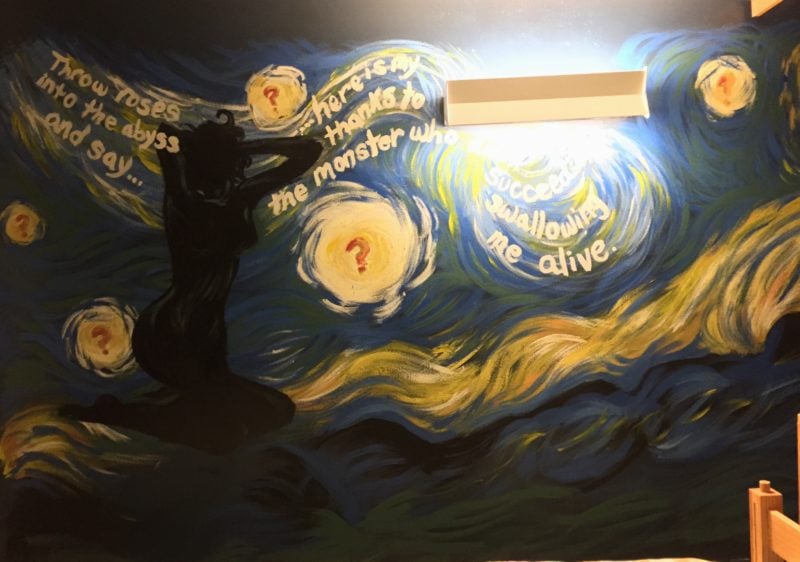 I didn’t write it; I just found it on Tumblr and kept it in a tag I’d labeled words, with the other disconnected quotes I reblogged and filled me with emotion. At the time, my computer background was Starry Night Over the Rhône. Sometime in the spring, I added another mural, this time based on The Kiss by Klimt. Before Senior Haus, I’d never been allowed to paint on my walls, and all my drawings growing up were limited to carefully placed frames on the wall. For the year, I said goodbye to the room I had in New York, at one point asking my parents to whitewash the whole thing and re-organize all the furniture. I was changing, that much I could see, and the only way forward was to metaphorically scorch the earth behind me and start anew. The summer after my freshman year, when I moved back to work at my local pool, I had trouble sleeping in a room that had begun to feel wholly not-mine. I remember the first time I slipped during a sentence, and I said something about going home to Cambridge, only to be met with quizzical looks: aren’t you home already? 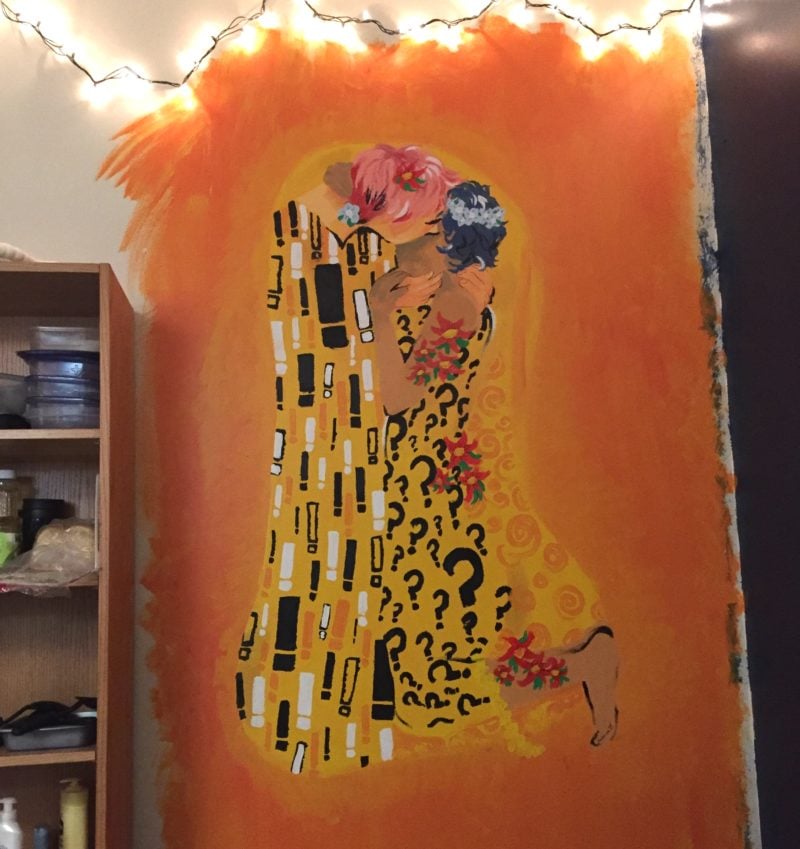 For my next two rooms, I returned to red. The first room was nestled in a half-occupied six person suite my Sophomore year. I had planned on making a mural on the wall overlooking my Institute desk, based on The Last Supper, but never got around to it due to the stress of school and the persistent feeling of being burnt out. I did paint my door though, because we were allowed,⁠04 allowed is a bit of a stretch. more like, if it was nice enough, our house manager wouldn't get mad about it. and what’s a better way to cement your ownership of a space than taking command of its entrance? 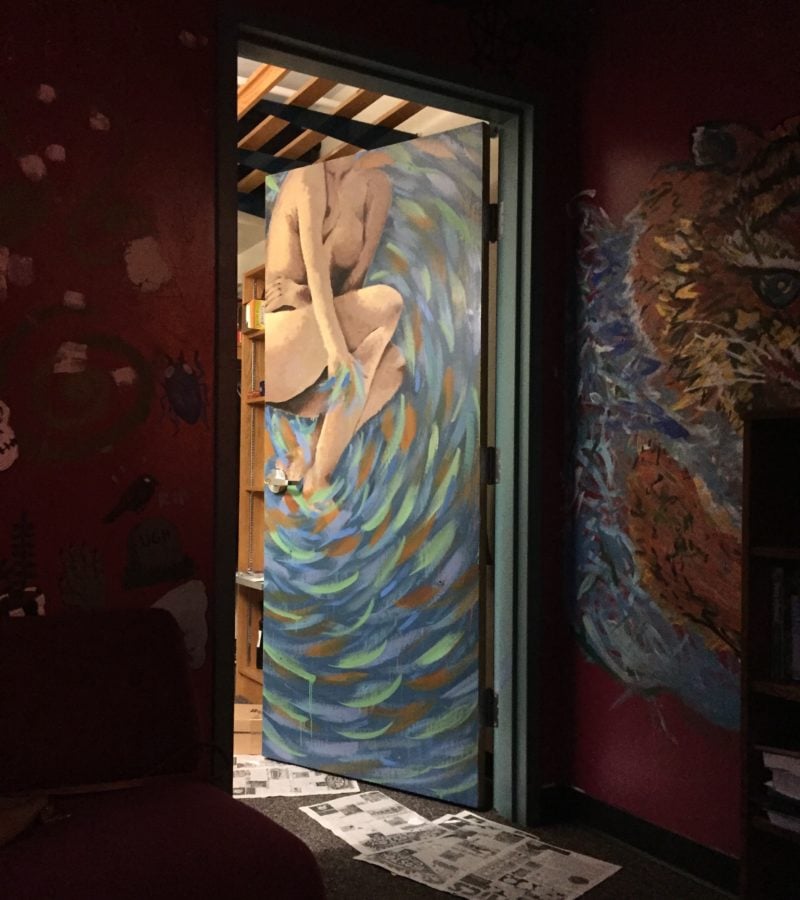 The second, a truly gargantuan room in Harvard Square, didn’t give me the freedom to paint beyond a base coat. Despite all notions of starting anew, I think a part of me has always been drawn to the dark, imposing walls of a bedroom, feeling like they could swallow me up like they do with the light that comes in.

My last room, in Inman Square, was white with slanted ceilings that hit my head if I didn’t step carefully, and floorboards that creaked and cracked underneath each step. As part of my lease, I wasn’t allowed to paint it, but I did hang up art I’d made in the past years—figure drawings from when I used to attend a nude portraiture club, former final projects from architecture classes, and paintings I made when I was deeply depressed. I kept useless decor, taking it with me as I moved, all acquired after I first stepped foot in Boston. My things, my signifiers of home, the four-year old empty bottles of wine and dead, flowers that crumpled with a single touch and wooden figurines and all. I had to pack all of these things up to make way for a summer subletter, and I spent a week figuring out how best to store the objects that served no purpose except to mark my room as mine. When I left, even though the bare bones were still there—the same slanted ceilings and creaking floor and even most of my furniture—it was clear that it didn’t belong to me any more. 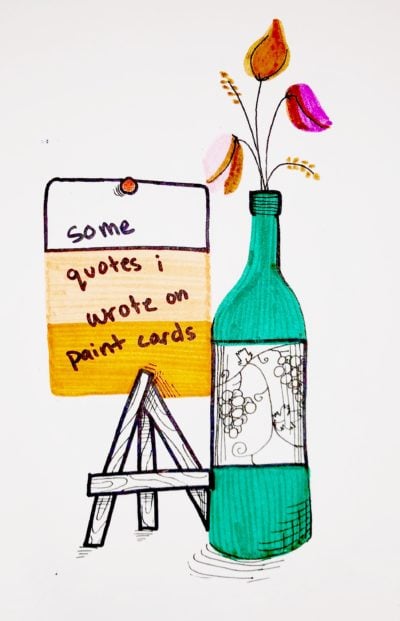 Now, my former bedroom is painted a light grey, with a new queen sized bed, furniture, and shelving, all done in the time I spent away from MIT living in Cambridge. The posters have been rolled up and shoved into a closet, and awards that I collected in high school hang proudly on the walls instead. Some of the photos I left behind⁠05 funnily enough, the photos you leave behind tend to be the ones that mean the least, and now they’re on prominent display for me are pinned to new, fancy, Home Goods-esque cork boards. I can’t lie, the room is much nicer, and put together, than what I remember it as. The posters no longer wake me up in a fright in the middle of the night when the tape decides to slowly peel itself off the walls, and I no longer have to use the old lamp that I accidentally melted part of my hat onto when I was 14.⁠06 turns out using hats as a light dimmer is a bad idea! the heat gets trapped and things begin to melt! I can stretch my arms wide in the bed and roll around how I please.⁠07 i stick to the same 3 foot strip most of the time The books I read and re-read growing up are on black, wall mounted shelves, and The Sea of Monsters is wedged between a copy of Orange is the New Black and a Diary of a Wimpy Kid book. My room has graduated from adolescence after going through its stages, from the angsty room awash in darkness to a room with a sleek, adult character. As time moves forward, so do the things in our life. Unfortunately, it’s grown without me, a better reflection of my parents affinity for neutral tones than my own. 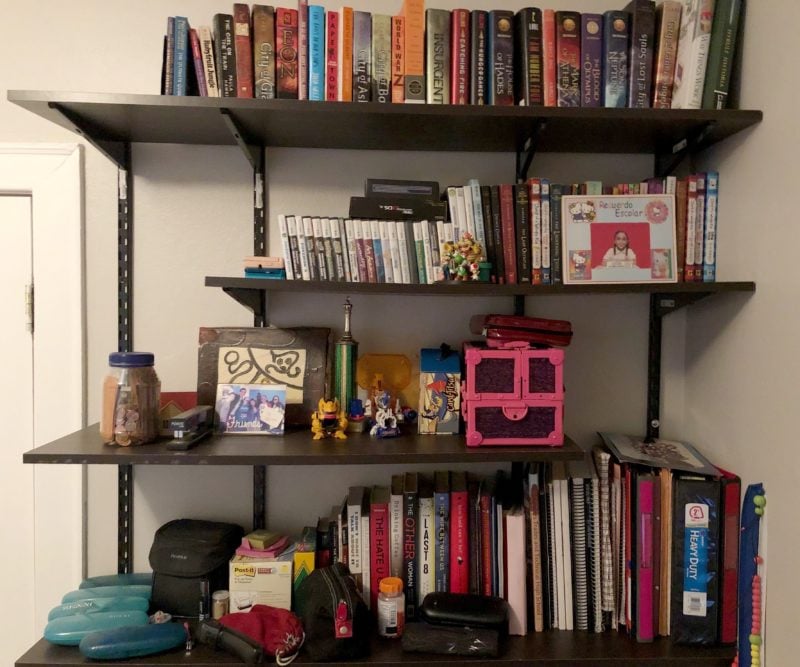 By the time I’ve finished writing this, I will have been back at my parent’s home in New York for four weeks. I’m not the only student going through this experience, the reliving, the regression, but I am a bit delayed. One of the first things I did upon arriving was going through the closet in my old bedroom, stripped of most of my clothing six years ago when I first packed up to go to MIT. I found shirts I hadn’t worn since middle school, shoes my parents bought me for special events that are much too feminine for my tastes now, an abundance of school-related junk to sort through, and the old posters. Worn down by time and the weight of a thousand other discarded relics pressed upon them, I threw them out, along with most of my other findings.

For the first time since leaving, I populated the shelves with the stuff I brought from Cambridge, reminiscent of the times I ambitiously filled shelves with my clothing at hotels on family vacations. I am trying to make this room mine again while I am here for another two months, instead of just existing here as a layover. Slowly, I become more used to waking up in this bed. I still don’t feel quite home, not in the way that home lets you exhale, lets you take down your walls and feel in total control, but it’s a start.

I have a tendency to wax nostalgic when I get lost in my own thoughts, and going from a house of seven quarantined people to a house of four, most of whom I don’t even see fairly often, gives me a lot of time to think. I’ve spent weeks reflecting and telling myself to write my thoughts down, but I don’t have anything profound or inspirational to end with besides something something bedrooms as representations of life stages. So, here is a song I like about bedrooms (though not really), which also served as the inspiration for this title: