let's distract ourselves with games!

Given how depressing and sad the last few days were, I’ve resorted to distracting myself with incremental games. You know, games like Cookie Clicker or something, where you unlock progressively more powerful upgrades, and watch number grow up. These overlap a lot with idle games, though the extent to which they’re amenable to idling is very different.

I don’t really play games that much; I’ve had a Steam account with like five games I still haven’t played yet, but I’m coping with current events. I think two or three nights ago we were at the Floor Pi Discord server just hanging out and avoiding talking about the election, and we played games and watched Kipo and the Age of the Wonderbeasts and streamed random things until we got tired and slept.

That night, people shared some of their favorite incremental games, and I think I’ll share some of mine too. After all, it’s more fun to play idle games when you’re juggling several of them at a time. There will be some spoilers, tips, and screenshots, but I’ll try to limit them to early-game content. Maybe next week I’ll have enough brainpower and energy to write something more substantial.

RIP Flash, by the way. Some of my favorite Flash games were incremental games, like Coinbox Hero or Anti-Idle: The Game. Do people these days even remember Flash? 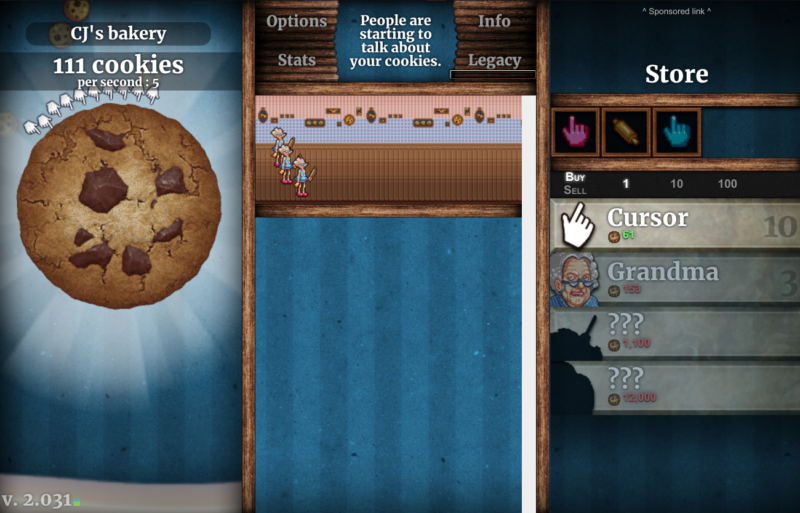 Cookie Clicker. You bake lots and lots of cookies. Probably the most popular clicker game, and the one that most people would have heard of. It went big around the same time that Candy Box did, and Cookie Clicker and Candy Box were the first two clicker games I ever played. It’s kind of clear what to do at any given moment, though, and coupled with the long waits, it’s probably my least favorite game on this list. Surprisingly long-lasting, having been around since 2013 and still getting active updates. It’s pretty clicker-y; idling doesn’t really start until an hour or two in the game. You can play this for over a month and still have content. 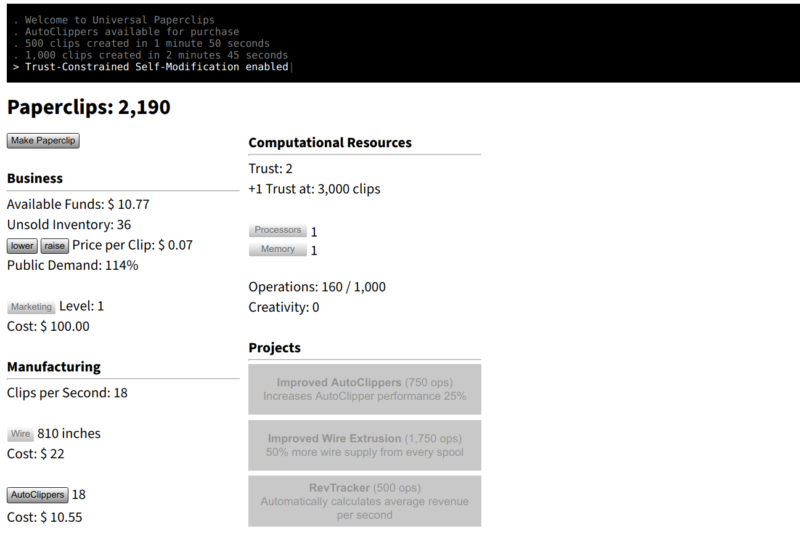 Universal Paperclips. You’re an AI selling paperclips. I remember playing this game three years ago and being impressed by how good it was. I think it’s the best incremental game I’ve played, and it’s a classic, and if you haven’t played it you should go and start. It doesn’t take too long to finish; you can even finish the game in one sitting. As a tip, buy processors and memory in a 3 to 7 ratio. 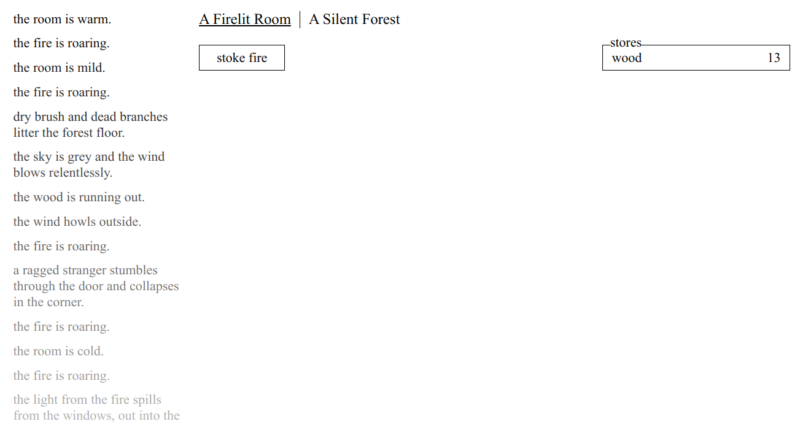 A Dark Room. This game has an element of mystery, and it’s not quite clear what this is about until a few minutes in. You start in a dark room and stoke a fire, and then things become complicated. I’d say it’s a better Candy Box. Probably has the most substantial plot out of all the games in this list, it’s worth playing just for the story. Rather short; you can finish in one sitting. At first, focus on building huts over traps. 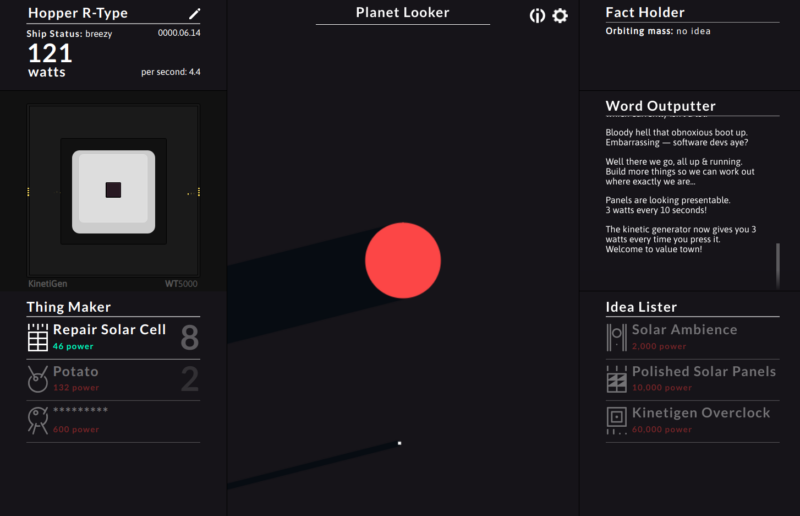 Spaceplan. You’re an explorer in space, orbiting a strange planet, and then things get complicated. Very polished graphics and sound effects. The browser version is only a demo, and is short enough to finish in one sitting. It doesn’t feel like it builds up to anything, and there’s really only one obvious thing to keep doing, which kinda detracts from how fun it is to play. But the graphics are good enough reason to play for a few minutes. 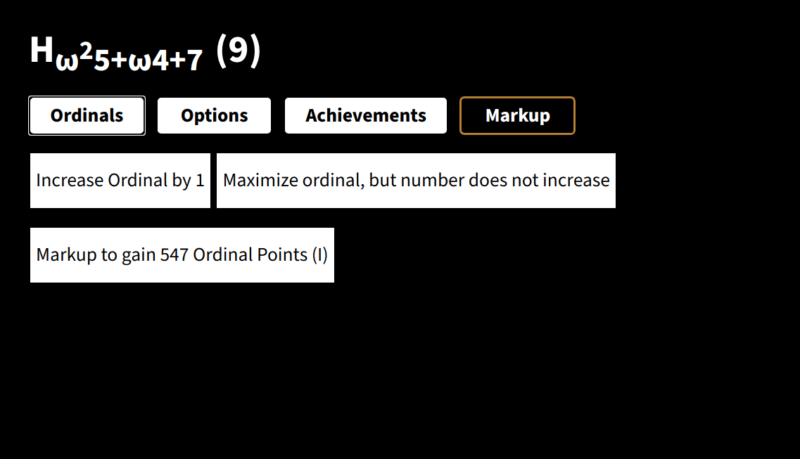 Ordinal Markup. As bare-bones of a “number go up” experience as possible, Ordinal Markup lets you work with ordinals, which is the fancy math way of formalizing “some infinities are bigger than other infinities”. Absolutely no plot, or even meaning to these numbers; you’re collecting ordinal points to make your numbers grow to staggeringly huge values, the likes of which other incremental games only aspire to have. The math-oriented theming makes this my second favorite game, after Universal Paperclips. Goes fast and slow and fast and slow at parts, involves some amount of planning and thinking about things, and has enough content to last at least a month of playing. 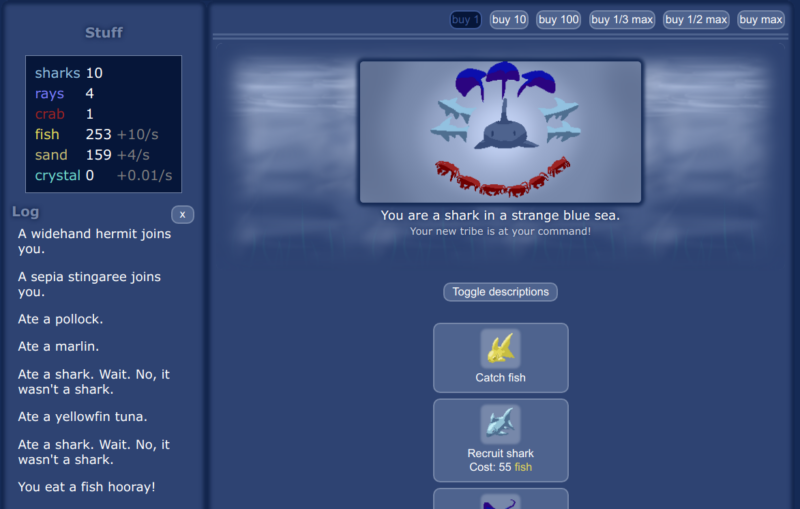 Shark Game. You’re a shark, and you can catch fish to recruit sharks, rays, crabs, and other marine creatures to collect more and more resources. Strange things lurk in the sea floor, however. The things you get to do as a shark become progressively more bizarre, the actions you can take begin to become more complex, and the humor in the writing scales in proportion. A very charming theme with cute art, with enough distraction to last a few hours. 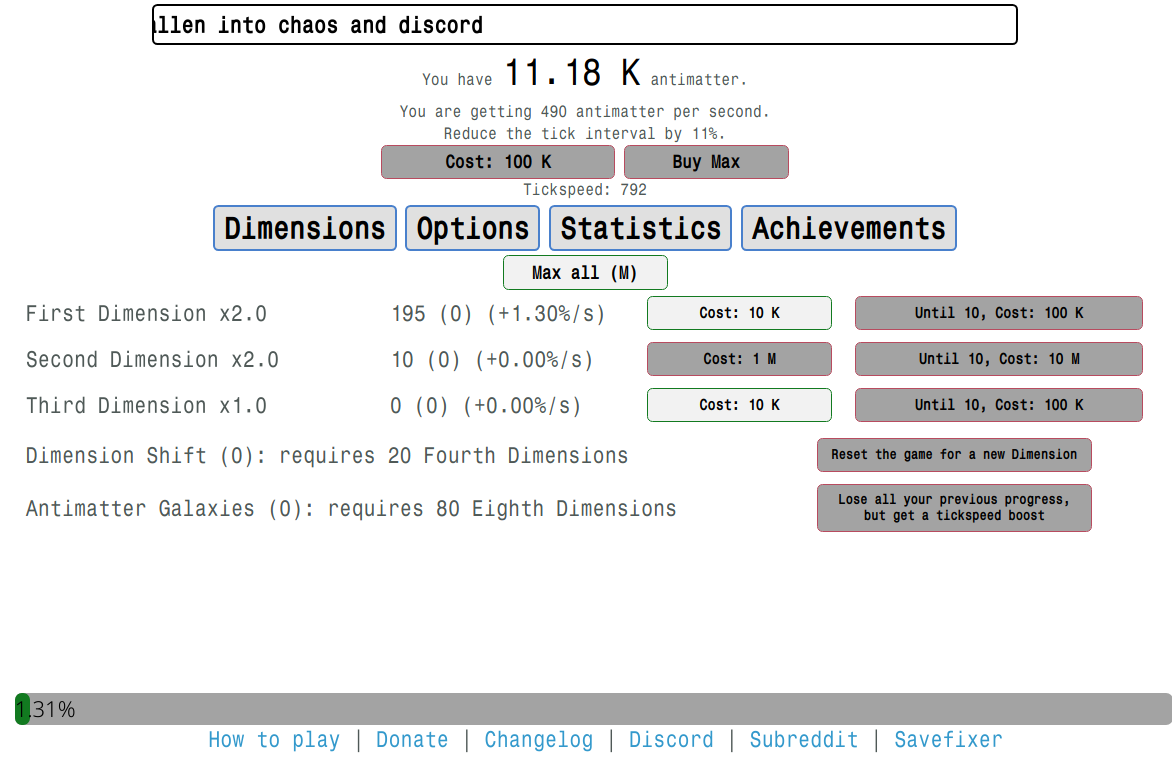 Antimatter Dimensions. Another pure “number go up” game, but unlike Ordinal Markup, this one at least names its number “antimatter”. It’s similar to Ordinal Markup in that the numbers get really big, but I think Antimatter has more timewalls and requires a bit more attention than Ordinal. Both are similar and have an active community. The game has a rather dark, meme-y sense of humor. Enough content to last you months. 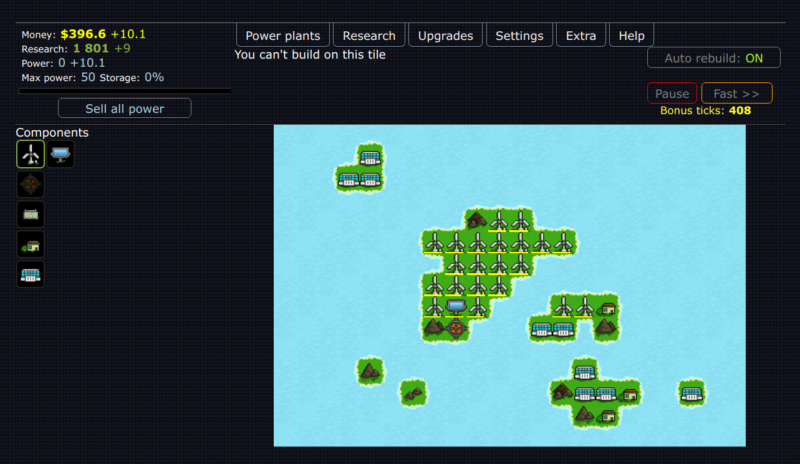 Reactor Idle. You’re a… power company? Arrange windmills, solar panels, and other energy producers to create power that you can sell for money. Layouting things starts simple at first, but soon you’ll have to think about balancing heat, using space for research, cooling, and other things, which makes for an interesting level of strategy that other idle games don’t have. Enough content to last months, but it’s worth playing for at least a couple minutes to see what’s going on. 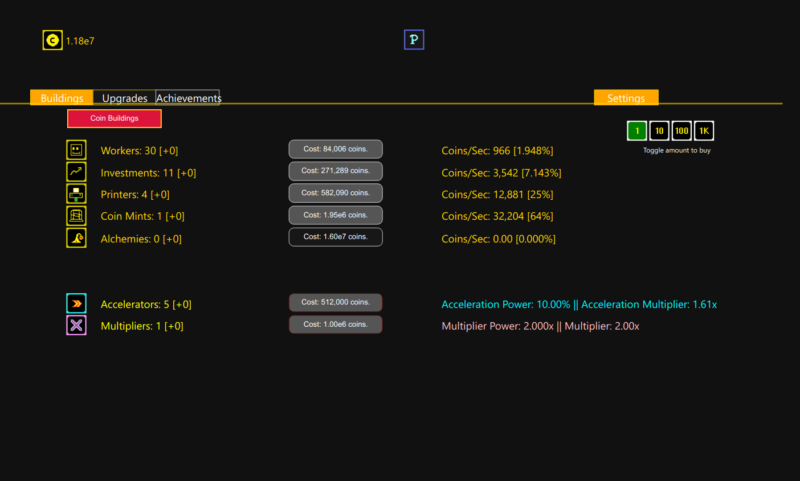 Synergism. I haven’t actually gotten too deep into this game yet, so I’m not sure about later game content. But it does look like this is an idle game about interactions between different things, with several prestige levels, and it’s interesting so far. Seems like it has enough content to last at least a week? We’ll see.

What does it take to get to know someone? I could tell you that I’m an international student from the Philippines, or that I live in East Campus (for not much longer, it seems). We could talk about the things I like, if that will help. We could talk for hours about Monster Train and type theory a…
Keep Reading