In case you want to travel over IAP… by Anelise N. '19

You have a lot of options! 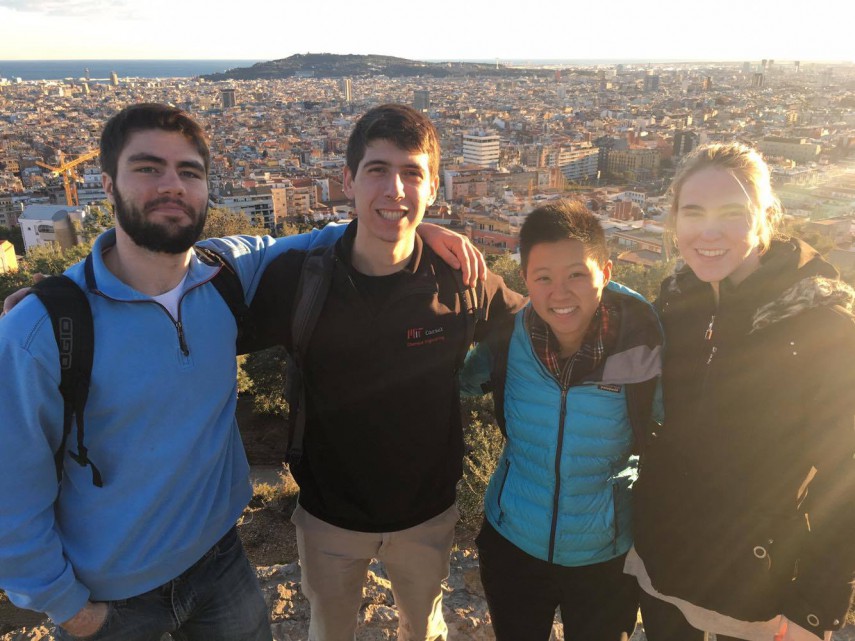 College study abroad programs are really great. You get to travel and experience living in another country, and it’s possible to do so on a college student budget. But what if you’re pursuing a really technical major, and it’s hard to get outside credit from a school in another country? And what if you’ve got other plans for the summer—like an internship, or research, or going home to see family?

In that case—which is a pretty common case for MIT students—then IAP is the perfect time to travel! (with the added benefit that you can escape January in Boston.)

Last January, I took a Spanish conversation class in Madrid with the Spanish department (I wrote a blog post about it—check it out here!). It was literally lifechanging. It was my first time out of the country, I made good friends from MIT that I wouldn’t have met otherwise, my Spanish got exponentially better, and it inspired me to start taking languages again. After that experience, I decided to try to go abroad for the rest of my IAPs at MIT.

There are actually quite a few options in terms of IAP abroad programs. I thought it might be useful to write a quick blog detailing some of them, to give people a sense of all the amazing opportunities there are for travel during January—which was something I had no idea you could even do when I first came.

This is probably the biggest/most popular of the international IAP programs. It sends MIT students abroad to cities all over the world to teach high school students for a month.

And when I say all over the world, I mean all over the world. There are currently programs in France, Georgia, Germany, Israel, Italy, Jordan, Kazakhstan, Korea, Mexico, Morocco, and Spain. And students are placed in a variety of cities within the given country.

The basic idea of GTL is that you teach a classroom full of high school students in a (probably) STEM subject for a month. Subjects range from computer science to physics to math to even debate and entrepreneurship. In return, your expenses for the trip are paid.

Beyond that, the programs vary widely based on the country in question. For instance, Italy is accepting 30-60 students this year; France is accepting 5. Some (like Italy and Korea) require no understanding of the local language; others (like France and Spain) really prize this. Some programs house people in homestays, others assign teachers to student housing. Some require 20 hours of work per week and others 50. Recently, one of my amazing friends attended the GTL info session and took detailed notes on the presentations from each of the countries—I’ve put them on Google drive so you can check them out here if you’re curious about the details of a particular program.

The application process for GTL is fairly extensive. You fill out an application that requires a resume, a PowerPoint slide presenting your picture and some custom information, a couple of essay questions, and information on your classes, extracurriculars, and teaching experience. You can specify your top three countries on your application. Most countries then have an interview process, whose rigor depends on the program.

Last year, I applied to GTL Spain and was not accepted—although I was contacted by GTL Italy a couple months later, after I had already decided to take my place in the Madrid program. (GTL is pretty biased in favor of upperclassmen).

This year, I ranked France first. The selection process involved an interview, which consisted of giving a short (like really short—5 minutes) teaching demo, answering some basic questions, and demonstrating my French ability. The French program is new, and it’s taking 5 students to work as basically TAs as part of a middle school/high school outreach program associated with the University of Grenoble. It sounds really fun!

IAP Madrid is a program hosted by the Spanish department. But it doesn’t have a strict Spanish requirement and it’s gotten pretty large, so I’m putting it in its own category.

Through this program, you get to spend a month in Madrid, taking a real MIT class, with other MIT students and an MIT professor, for MIT credit. Pairs of students are placed in homestays, so you still get a pretty immersive experience. Also, in most cases, classes are held three hours per day for only four days per week, so you have ample time to explore the city on weekdays and to travel on weekends. Last year, my travel group made it to 7 different cities within the month!

There are typically three classes offered in Spain. Last year, there was Spanish II, Spanish Conversation and Composition (for people who were at a Spanish IV level or higher) and Spanish Literature (taught in English). So you don’t even need to speak Spanish to go! Unfortunately, the literature program is pretty competetive–this year there were over 100 applicants for around 30 spots.

The application was fairly straightforward: I think it required some demographic information and an essay. Although there is a nominal program fee, there were scholarships available by application. If I recall correctly, applying for the scholarship was not much extra work, and basically everyone who applied got one. (Although I’m not sure if that will continue this year.)

And this year, the organizers of IAP Madrid are debuting an exciting new program: Literary London! It has a similar structure as the Madrid programs, with students studying literature in London. Unfortunately, since the program is so new, the funding is not yet great. If you have financial need, some of the program fee may be covered (the program fee includes housing), but you will responsible for your own air fare and food. If you’re interested, you can check out the notes I took at the info session here.

If you want to learn more about IAP Madrid, you should check out the posts that Krystal and I wrote about last year’s program, the website, or the PowerPoint slides from the info session I attended!

These programs are typically smaller and harder to find out about it…but they do exist.

Some specific departments organize and host their own IAP trips for their students. Like the program I will be doing this IAP–January Scholars in France!

I learned about JSF last year, when I started taking French classes. Several professors from the French department take around 10 students to Paris for two weeks to explore the city–and, of course, have an entirely immersive French experience. In sounds, in short, amazing. The program is conducted entirely in French, so it’s limited to students who have a conversational ability in French, and almost all the applicants are doing at least a humanities concentration in French.

The application process involves writing an essay (in French, of course) about why you want to take part, and then having a short interview with some of the French professors.

I am so so excited to be taking part in this program!!! Spending two weeks in Paris sounds amazing. Also, my Spanish-speaking ability improved so much last year while I was in Madrid, and that program wasn’t even total immersion. I hope my French will get a lot better and I can hit my goal of being comfortably conversational in French before leaving MIT.

If you’re looking for an experience in industry over IAP, externships are the way to go. An externship is a super-short, month-long internship, often under the supervision of an MIT alum.

Externships are not primarily an international program—there are opportunities all over the United States and at some pretty big-name places—but there are also companies abroad looking for externs. In fact, I found out about this when I applied for an externship freshman year without realizing that it was actually in India!

Funding, location, and type of work of course varies widely by the company, but if you want work experience and also want a chance to go abroad, these are definitely worth a look!

And if you need more than a month…

MIT has a great study abroad program, MISTI (MIT International Science and Technology Initiatives) that sends almost 1000 students to over 25 countries each year, fully funded, to work or do research over the summer.

But if your summers are packed (like mine), then going abroad in January is an unmissable opportunity!