How to kiss goodbye to a school that rejected you

Fun fact: when George Washington was a young Virginian, his driving ambition was to be an officer in the British army. Despite his repeated attempts, he was denied a commission in the service: not, Washington fancied, because he was in any way deficient, but because the British army was too foolish to recognize his potential.

Washington rebounded from this rejection by heading the Continental Army, driving the British out of their own colonies, and becoming the iconic first president and, in many ways, the linchpin in the formation of the United States of America. 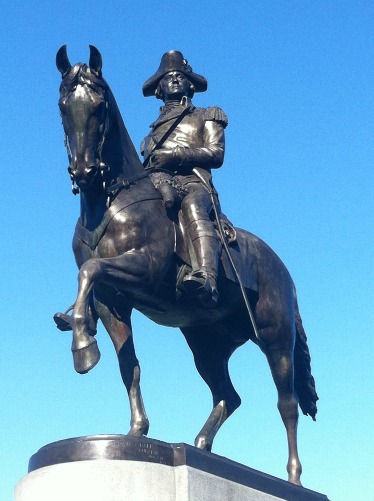 Worked out pretty well for you, didn’t it, Washington?
The statue in the Boston Public Gardens.

Washington’s attempt to gain a command was somewhat futile to begin with because he was up against British anti-American prejudice, and there wasn’t much he could do about it. Now, there are a lot of things that you can influence about your college applications. You can study like Hermione Granger to get good grades and SAT scores, you can pour your heart into your extracurriculars, and you can craft exquisite college essays. There are also a million things you can’t control. You can’t control where you went to high school or where you’re from geographically or what your gender is. You can’t control what traits an admissions committee is looking for, or what mood a reader is in when they peruse your essay, or what the rest of that year’s applicant pool looks like.

In other words, there are a lot of factors that can determine whether you’re offered admission to a school that have nothing to do with you. I’m making this point because getting rejected from a school you love is crushing, and it can often be framed in the context of “I wasn’t good enough to get in.” That’s not the right way to look at it. College decisions are not a reflection of your personal merit. Too many other factors come into play. And that’s important to recognize.

That’s why I love Washington’s “It’s not me, it’s you” attitude towards his own British rejection. Guys, let’s face it: if you’ve got the motivation to apply to a great school like MIT or any other top university, you’re already an ambitious, driven, high-achieving person. You know that you have a lot to offer the world. If you were rejected somewhere, that university, for some reason or another, is not recognizing what you have to offer it. That can be a painful realization to confront, especially if a school felt like a really good fit. But honestly, who is a college to render judgment on you? You know what you have to offer. It’s not worth spending time pining over a school that doesn’t appreciate you. And you owe it to yourself to go somewhere that recognizes your potential and offers you an environment where you can thrive.

And that brings me to my most important point. While we’re going with a Revolutionary theme, I’m going to borrow a quote from an incredibly powerful song from Hamilton: “I am the one thing in life I can control.”

The single most formative, abiding factor in your life will be you. Your own abilities, your determination, and your attitude. Where you go to school might change your path, just like any number of situational factors that tweak the course of your life. It’s not going to define you. Going to your perfect college won’t hand you a perfect life on a glittering platter. And if you’re ambitious and hardworking, you won’t need that perfect school to succeed.

You can’t control where you get into school. Fortunately, you can control you. And that’s the most important ingredient.