For the past week, I’ve been thinking a lot about what I want to do with my life and my time. I’m currently on a track at MIT to pursue EECS (Course 6-2) and Media Studies (CMS).

Prior to coming to MIT, I swore I would never be a computer science major. I had taken AP Computer Science A in my junior year of high school, hated it, and swore I’d never return.

But surprise, surprise, guess who came crawling back? Me. I did.

The truth in the matter was that I didn’t really hate compsci, I just found it difficult. And to me, difficulty was something that I shouldn’t pursue. I’ve talked about this in past blogposts, but I’m definitely growing out of this mindset.

But as I’ve been home in quarantine, I’ve had a lot of time to think to myself and really ask myself:

What do I like? And what do I want to do?

A question my ex-boyfriend used to ask me back when he was having difficulty choosing a major was “How do you know you want to do all of these things?”

I remember I had told him “I don’t know, I just think they’re cool.”

In an effort to help him find some sort of direction or path, we both made something known as “Our Cool Lists”, a list of things or activities we would consider pursuing in the future as a career. 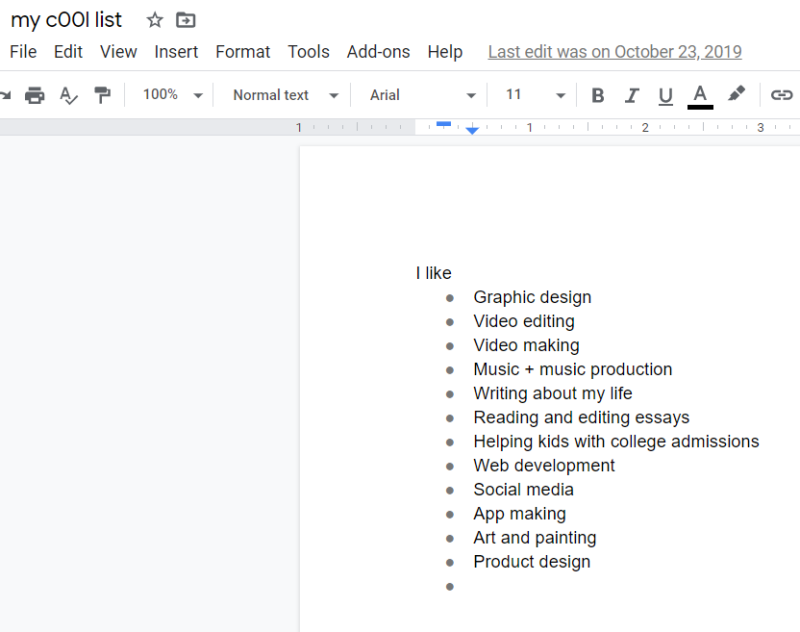 It’s been a while since I’ve looked at this, but I don’t think I would take anything away from it. In fact, I think my cool list can probably be partitioned into overarching categories:

Obviously I don’t have to be good at these things, or even know how to do them (I don’t know how to CAD), I just simply…have to like them and find them interesting. Which I do. Then there are more general areas I’m interested in, like:

So…why do I even bring this up in the first place? Well, I’ve been wondering a lot about what the future holds for me, if I’ll get to pursue all these various interests of mine, if I’ll find a career that is somehow able to encapsulate all these things. I worry that the path I’m taking now will lock me into something I didn’t want to do.

I ask myself a lot if I like computer science because I genuinely like it, or because I feel like I have to learn it, and majoring in it gives me no choice but to learn how to code. 6.08 brings me some enjoyment, but it brings me a lot of pain, too. It’s extremely gratifying to be able to bring my projects to life, watching it go from pseudocode to code on a screen to a display on my LCD. But I’ve been thinking a lot about if this is something I can see myself doing for the rest of my life.

And in some aspects: yes. I do.

Raymond’s asked me on multiple occasions: “Cami, what do you even want to do with your life?” (Yes, he words it exactly like this, in this asshole-ish “wtf are you doing” type way.)

And I always just replied with “Something fun.” Which is true.

As obnoxious as this is going to sound, I never really saw myself as doing something boring in the future. And I know it’s really going to hurt if I do, because I feel like I’m going against my morals. I’ve always told myself I’m going to do something really cool and creative and fun, and I know that 4 year old me would just be devastated if I didn’t.

So now I feel this weird pressure to…make sure I don’t end up in a job I hate. But I know that’s a lot to ask for. And I know this is so far into the future, but I think I just need to constantly remind myself of the goal and not get lost in the sauce of everything.

Sometimes I feel myself slipping, where I just think I should drop CMS altogether and focus on CS and make sure I’m the best at it so I can get a good career and do good things.

And in some ways, this is my goal. I want to be good at CS. I think it’s cool and I want to make cool things. But I sometimes worry that I also want to be good at CS for the wrong reasons, like proving a point that I’m good enough for CS, when in reality, I don’t have to prove anything to anyone. Or that I’m only in CS because I think that majoring in the humanities is a dead end (when it very much is not).

Recently, I’ve added “I like to make things pretty” to the end of my “Something fun” answer. It’s the part of CS I realized I like the most. (I’ve recently come to learn that this is known as front-end development).

In all honesty, though, the true ideal would be some combination of all my interests, specifically CS and media — something that allowed me to be creative and open and transparent, but also aesthetically pleasing and organized and useful. I want to make and plan and advise and learn and write and code and.

And I’m really, really nervous that I won’t be able to do these things. Or that my career will take time away from these things. I think the reality of the situation is that I won’t be able to hold on to all these interests. Even now, I’m playing guitar less and less, prioritizing other interests over something that used to be my everything. It’s really strange to watch my passions rise and fall so randomly.

For now, I think I’m going to just continue what I’ve been doing since my time here at MIT: doing things I find cool. I think a big difference I’ve noticed from high school to college, and probably the reason why I’ve had such a difficult time choosing my career path, is that I’m starting to do things for the sake of interest rather than the sake of obligation.

In high school, I took AP classes because I felt like I had to, not because I wanted to. Whereas now at MIT, I feel like I can just pursue what I want and find the things I like. I’ve taken classes I wouldn’t have ever expected myself to take, like 6.08. I’ve joined groups and clubs I never would’ve considered in high school, like DT and The Tech. And I think I just have to remind myself that it’s good to have such a wide variety of interests and to be able to identify them in such a general way, rather than locking myself into career boxes.

(Also, if anyone knows of any careers that could possibly combine all of these things, please let me know. I’d be really interested in learning more!!!)