bugs and toasters and explosions, oh my!

A few months into living on my own, my roommates and I have learned many important life lessons about food, mostly through trial and error. A lot of error. Here’s a list of my very own freshman housing horror stories:

1. We discovered that rice bugs exist. Having eaten rice with every meal for the past eighteen years, it’s safe to say that I’m a pretty big fan of it. What I am not a fan of is bugs. So naturally, I was very concerned when I opened the rice bag one day and something came flying at me, spurring me to scream for Selena, the official bug person in this apartment. The insect was properly disposed of and I thought that was it.

A few days later, as I was washing some rice, I saw a few brownish things float up to the top.

“Huh,” I said. “That’s weird.” And proceeded to think nothing of it, because I wasn’t wearing my glasses. It took me a couple more days to realize those were dead moths. Rice moths. 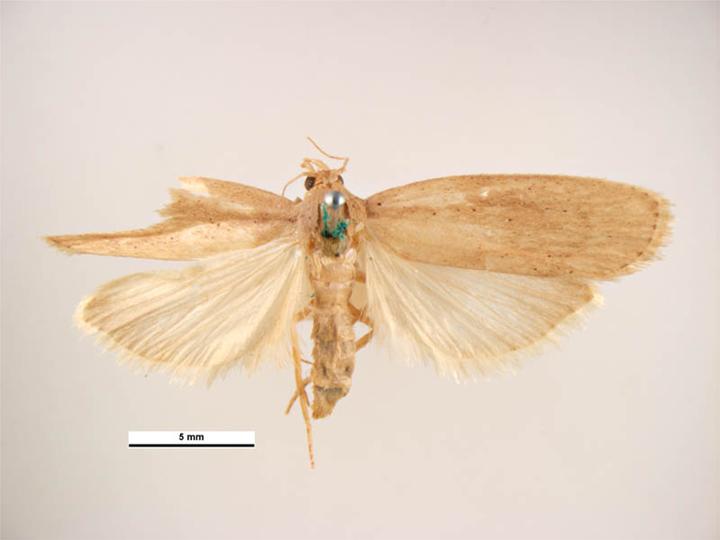 I had never heard of rice moths before, so this was a very unpleasant surprise, because I wasn’t very keen on ingesting bugs, despite the extra protein.

So I called my mother.

“That’s normal,” she said, which did nothing to soothe my nerves. “Just freeze it for a few days to kill off the larvae. It’ll be fine.”

We yeeted that bag into the freezer for like a week, and by the time I cautiously cracked it open again, there were no moths in sight. And that was the end to our traumatizing rice moth adventure. 0/10, never want to experience that again. Keep your bags sealed and wash your rice well!

2. None of us know how to use can openers, apparently. The little twisty mechanic is surprisingly difficult. Also, we had to keep borrowing can openers from other people until we realized that we actually do own one???

3. Speaking of owning things we didn’t think we owned…for some reason, two entire weeks into the semester, we still hadn’t noticed that there was a whole toaster sitting next to the microwave, and when we did notice it one night, we were all seized by the sudden, irrational fear that someone had broken into our apartment and left a random toaster behind.

Turns out it was my toaster! I just had no idea it was there in the first place because I didn’t know my mom had packed it.

It also ended up breaking a few weeks after that–it started doing the thing where you have to aggressively push the lever up and down in order for the toaster to heat up. Eventually it stopped working entirely. We did get a new toaster, though, and it’s been great for those days when bread is suddenly the most delicious thing on the planet.

4. Unplugging pressure cookers can lead to explosions. I was on call with Daniel one day to go over a 7.015⁠01 intro bio pset when I suddenly heard this giant boom come from the kitchen and the sound of Selena swearing. This was the sight that greeted me:

Apparently, Selena unplugged the rice cooker right after it beeped, which led to this.

(Most of these disasters always seem to happen when one person or another is in a Zoom call, by the way. I think Selena was in a sorority recruitment event.)

So, like, don’t do that. Because otherwise you might end up setting off a pressure cooker bomb in your kitchen. Which wouldn’t be good for anyone involved.

As Daniel put it, “Three minds, attending one of the most prestigious schools in the world…defeated by a rice cooker.”

5. The knob on one of our pan lids falling off in the middle of cooking something. Thankfully the lid didn’t shatter or anything, but…yeah.

6. Dealing with flaccid cucumbers. The opposite of a joy to behold.

7. Food going bad, in general. Adulthood is really just about trying to eat food before it goes bad and feeling guilty when it does. You learn from it, though. Like, muffins with fruit in them need to go in the fridge, ginger needs to be stored somewhere dry or else it gets a really weird color to it, etc.

8. Trash bags without handles. They’re an absolute pain to deal with, especially if the trash is overflowing and you can’t get a good grasp on it and all your stuff ends up falling out if there isn’t enough space at the top to make a knot. The kind we had were technically twist tie bags, but they didn’t include the ties, so we were struggling for a good few weeks. Trash bags with handles are lifesavers.

10. Generic kitchen blunders, like burning soup, leaving ovens unattended, setting off the smoke alarm, accidentally cutting ourselves or getting burns from the stove…the standard stuff.

11. Height problems. I’m the tallest one here, so when I wash pots and stuff I tend to put them on the top shelves so they can dry. Which is an issue when my roommates can’t reach them…

12. Reaching the point where we finally cracked into our ramen supply. It was bound to happen–we were gonna get too tired to cook or order out eventually. It’s surprisingly good ramen, although it’s not actual ramen. More like rice noodles? In any case, I think I get the whole college student and ramen thing now.

13. Food delivery fees suck. We were ordering a lot of DoorDash and Uber Eats in our first month, but that changed the one time we physically went to Chipotle⁠02 a 5 minute walk away, which is really convenient and found out that it’s SO MUCH CHEAPER TO PICK THINGS UP IN PERSON. This is something that we definitely should’ve realized sooner, but we learned it the hard way.

14. There are some things that are just bad to order delivery for. We tried getting Italian one time and it was just…stunningly disappointing. The portion size was way too small for the price. Pho and Chinese food are always good options, though.

15. Pizza rolls explode in the microwave. They technically should be put in the oven, but sometimes I just don’t have the patience or time for that, and my standards have gone down a lot since the beginning of the semester. Also, we only just got baking trays, which have turned out to be really hard to clean because the oil won’t come off unless you scrub it super hard, which is why we’ll need to get steel wool at some point.

It’s a fun little game I play against time whenever I make them, because I have to snatch them out the moment I hear the first pop.

16. And most recently, we melted the rice cooker cover on the stove while we were trying to make rice pudding. So now there’s melted plastic all over one of the burners and it smelled really horrible. Another reason why we really need steel wool so we can get it off, because regular sponges won’t cut it. Our poor rice cooker has gone through so much…

Despite all these stories, we have had some positive food breakthroughs!

1. Frozen grapes are addictive. I didn’t know that you could freeze grapes until Sarah introduced me to it, which has been both the best and worst thing that’s ever happened to me, because oh my god they’re so good.

You just have to wash and dry them before you put them in the freezer, but it’s so easy and they’re a really good stress-eating snack. TOO good. I burn through that stuff at the speed of light. I think my body is 50% frozen grapes at this point.

2. We tried HelloFresh for a couple weeks, and it turned out pretty well. I started listening to the podcast My Favorite Murder to pass the time⁠03 because doing dishes without music or other media is just torture. lately i've been watching a lot of anime when i do it! i finished my hero academia and i'm slowly working my way through haikyuu while doing dishes. They kept having HelloFresh ads with discounts for listeners so I eventually caved. It’s kind of nice, though, because they send you these instruction sheets and all you have to do is follow the pictures.

Here’s some stuff we made: 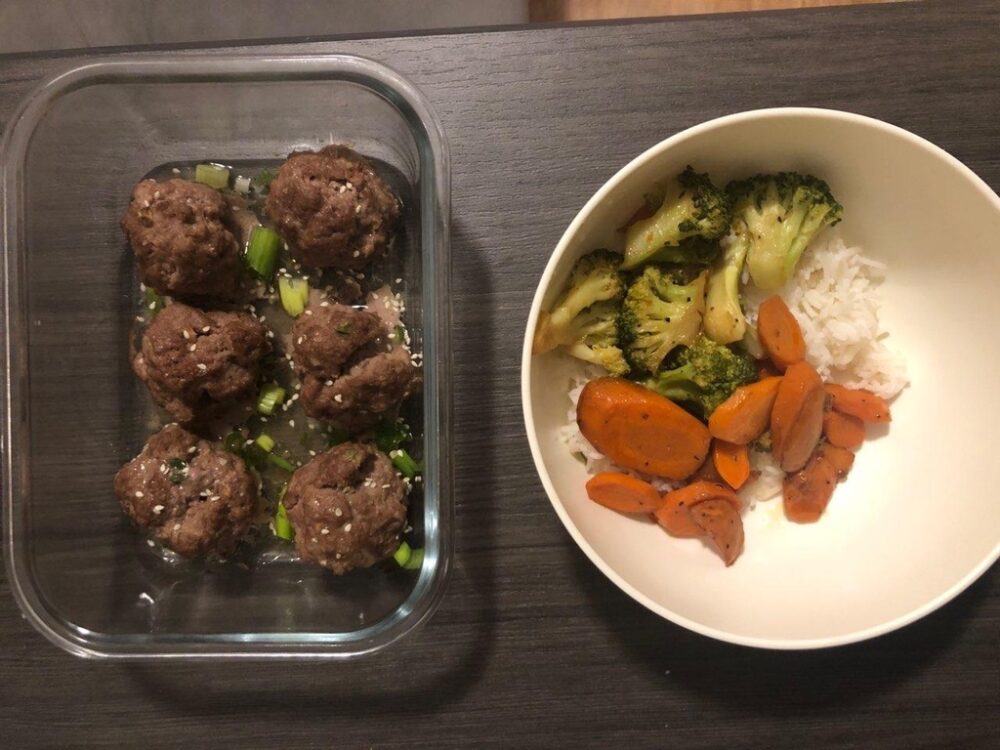 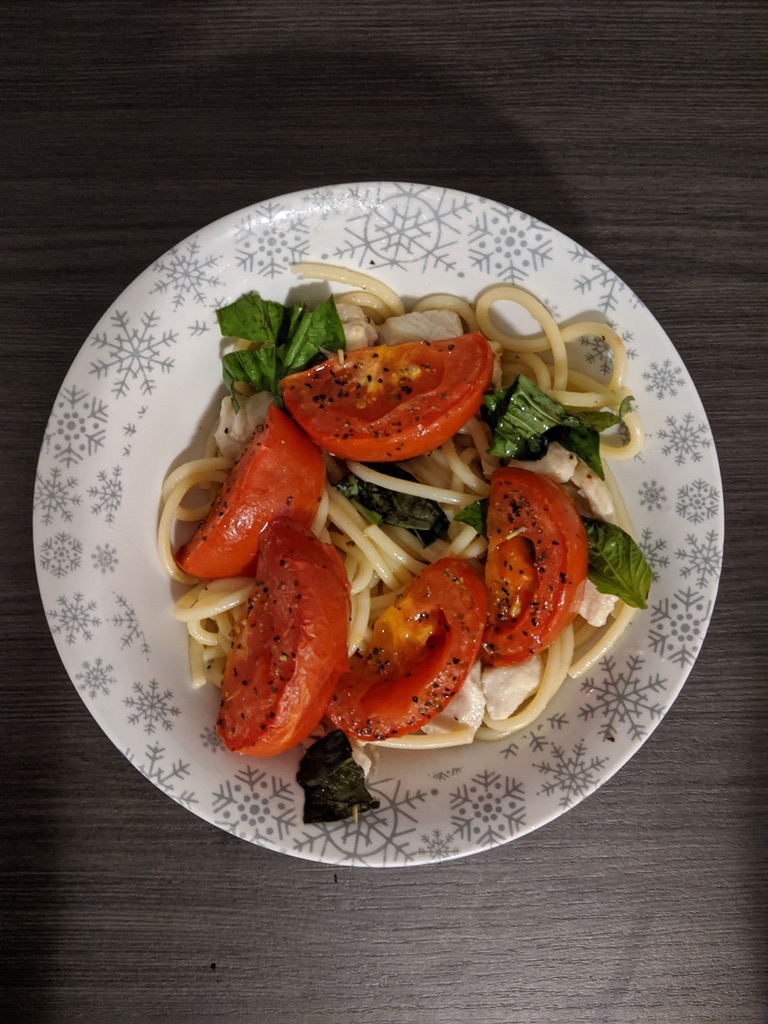 It got kind of expensive and time consuming which is why we only did it for a couple weeks, but now we’ve added to our knowledge of dishes!

3. Sweet matcha powder is a lifesaver. I’ve been drinking a ton of it lately, and it’s so easy to just…pour some milk, grab a couple spoonfuls of matcha, stir and enjoy. Definitely not the healthiest thing out there, but it’s great for a quick boost.

Hopefully the second list can pass the first one someday!