The other day, Katharine wrote:

Matt, I have a question/concern. It seems that many of the admitted students already have an idea of what careers they would like to pursue or have one or two subjects that they extremely excel in. For me, I’m not an extraordinaire in any one subject, but I do relatively well in just about all my classes. My interests are extremely varied too. I was wondering if the core curriculum limits exploration at MIT and if MIT has its way to help people find interests and in my case, something I REALLY like and I’m REALLY good at, at the same time!

Let’s start from the beginning to answer this. As you may know, what you wrote on your application has absolutely no bearing on what major you choose at MIT. You could have written Computer Science and instead major in Architecture; you could have written Biological Engineering and instead choose Management. Everyone comes into MIT undeclared, and chooses a major at the end of freshman year.*

*n.b. Actually, you need not choose a major until the middle of sophomore year, though most students choose at the end of their freshman year. Also, changing majors is relatively easy, even between unrelated majors. I switched from Mathematics to Management Science at the end of my junior junior year.

How do students choose a major? There are many ways MIT will help to expose you to your different options. As early as CPW (less than a week from now!), there will be opportunities for you to learn about the different departments. At CPW (on Friday), there will be an Academic Fair with representatives from all of the different majors to help you think about classes and research opportunities in that field. A similar Academic Fair occurs over Orientation, as well as a symposium of sorts where the professors of various introductory classes tell you about their classes and your different options.

After the first term, even more events will be held to help you choose your major. During IAP, there will be a “Choice of Major Fair,” where departments will recruit you to (and inform you about) their majors. Later, in the Spring term, departments will have individual seminars and open houses to get even more in depth.

Most students have plenty of room and flexibility in their schedule to take a couple introductory/exploratory classes in the majors they are considering during their second term. For example, in my second term I took 4.101: Experiencing Architecture Studio, 18.03: Differential Equations, and 14.01: Microeconomics, since those were the departments I was considering at the time. Students also explore their prospective majors through UROPs and pre-UROPs, as well as department seminars. Upperclassmen, freshman advisors, professors, the Careers Office, and the Academic Resource Center are all great resources, too.

Now is the time of year when departments hold their Open Houses for prospective majors. Every morning, I walk from the subway stop to my office, and this week there were many open houses being advertised along my route, so I decided to take pictures of them. 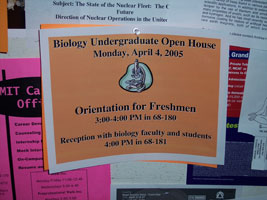 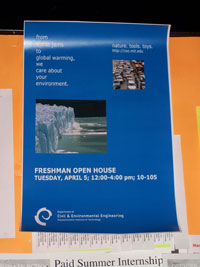 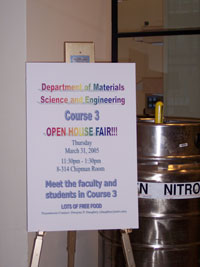 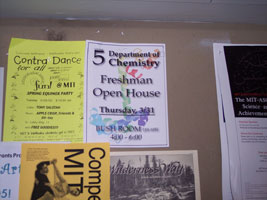 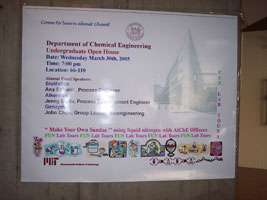 Even better than all of this is the fantastic Choice of Major website. It has profiles of each major, including what introductory classes you might want to check out, logistics of the major, current research in the field, career opportunities, and more. The site also has some great advice on choosing majors, charts of requirements for each major, and lots of other good stuff.

In short, MIT will provide many resources and opportunities when it comes to choosing a major.