On Friday I flew out to California to visit my friend Greg. Greg is one of my hometown crew from back in NH, but he now lives out in the bay area, where he works at a pretty awesome solar energy startup called Cool Earth Solar. I’ve been out to Palo Alto / San Mateo in the past, but never had the opportunity to visit Greg, so this past weekend was my opportunity to do so.

Greg is one of the most talented makers I’ve ever met. He used to build terrific things back in high school – incredibly elegant trebuchets, a handmade wooden kayak, little robotic wooden men. He continued this in college while pursuing a degree in mechanical engineering. Greg, like our own Chris M and Snively, is someone who is really fantastically creative, and whose creative energies often erupt into the physical world in the form of awesome things. Even though I’m not myself an engineer, I always love being around people who love to create.

So you can imagine my delight when a few weeks ago Greg called excitedly to tell me that my visit – which I had planned a long time ago – coincided with Maker Faire 2011.

Maker Faire is run by Make Magazine, and it’s basically an enormous fair / convention / carnival / celebration of creativity. Thousands of people come to see hundreds of booths, exhibits, demonstrations, and installations. There are big companies like GE and Google showing off their solar carousels or Android arduino robots; there are random inventors showing off their steampunk bicycles or home-fired ceramics.

So Greg and I went to Maker Faire, along with another friend from back home Eric, who is the lead developer at WePay. And here are just a few pictures / videos we took of all the awesome stuff at Maker Faire:

At the entrance LEGO had this JEEP…made of LEGOS 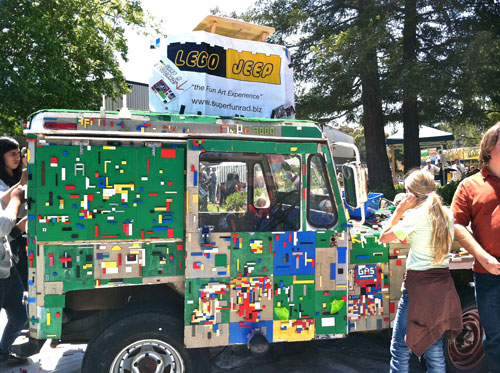 And, nearby, a seesaw water-pump was running: 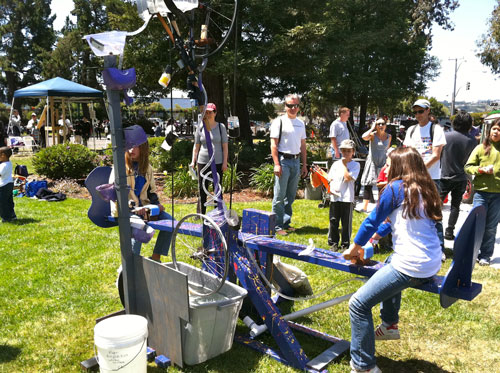 Then, while we were walking around, we were almost run over by the firebug bicycle menace: 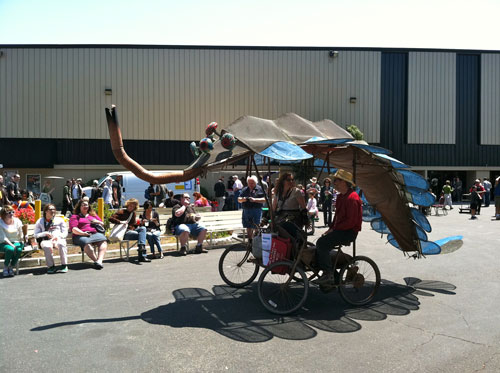 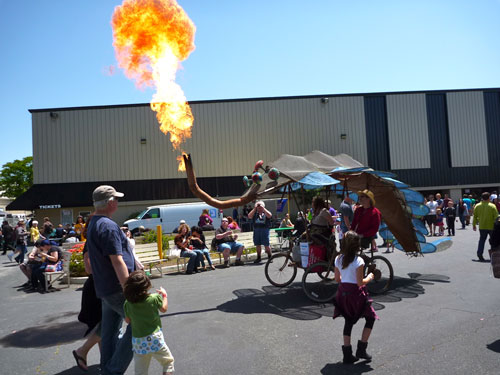 As we dashed away from the firebug, some cupcake cars rolled by:
And we ran into the waiting arms of an enormous, people-powered death bird: 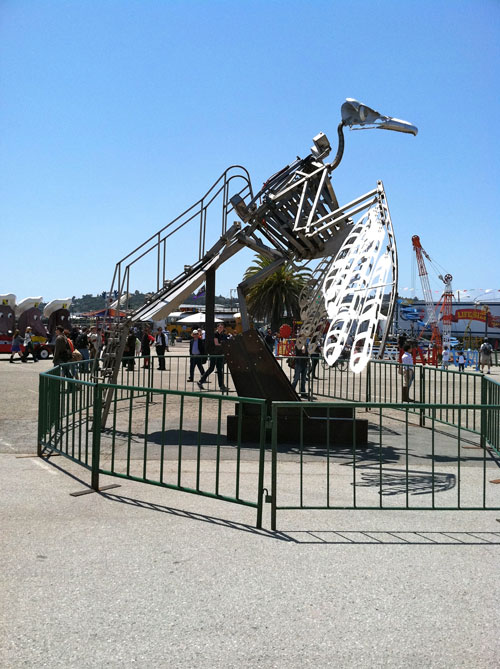 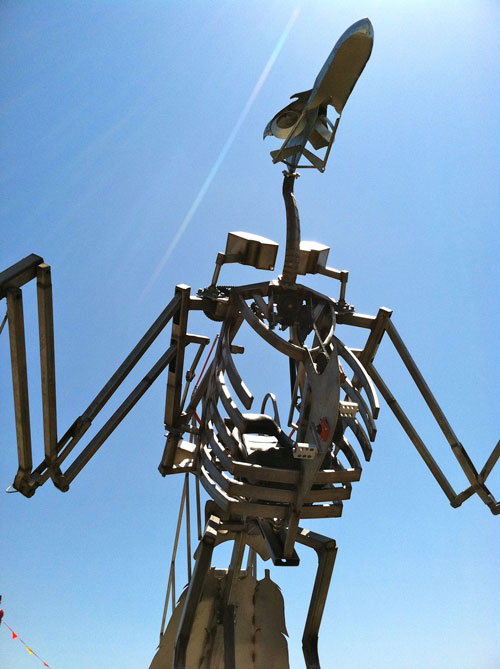 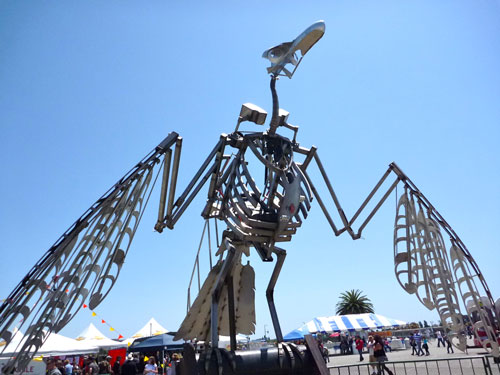 Nearby, a man in a lab coat was melting blocks of solid iron with thermite:
Lots of folks at Maker Faire love bicycles. There were handmade cruiser bikes: 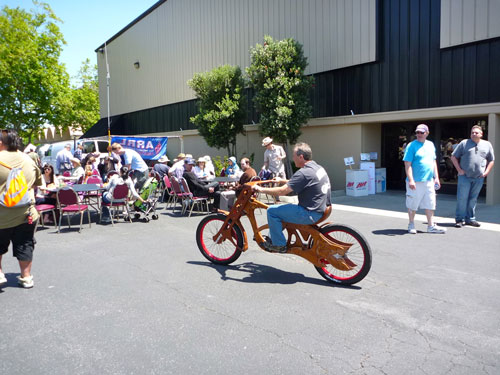 Elaborate solar bikes which went 35 MPH (much to the delight of the tiny boy who was recruiting rides): 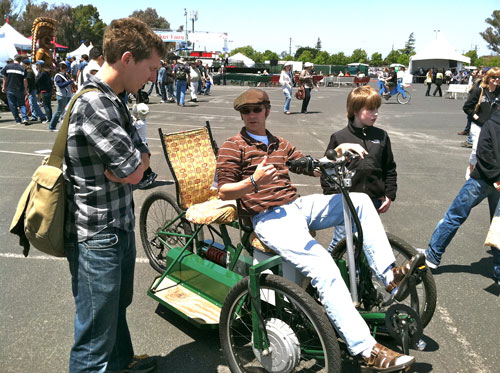 And rock concerts powered by bikes and guitar shovels: 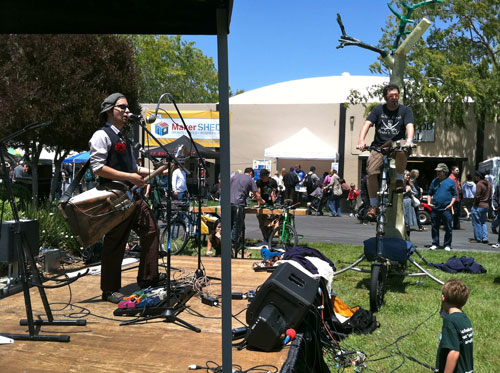 Speaking of guitars, there were some folks there who had made a bunch of their own designs and then milled them out of wood, and who were open sourcing their designs to get feedback from the web. Greg snapped a picture of me playing some As Tall As Lions on one: 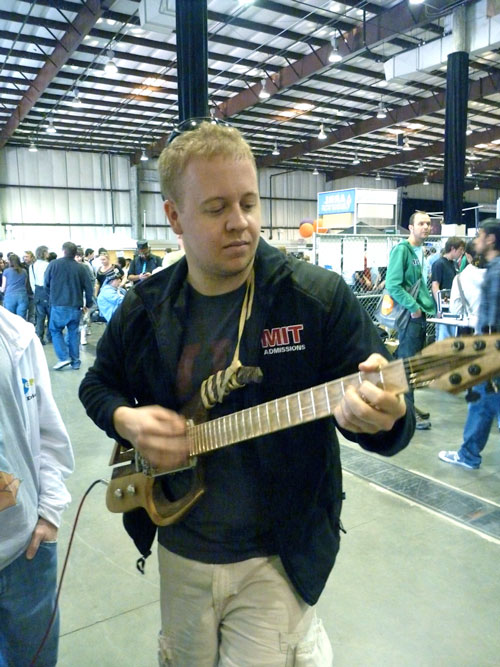 Also inside the main expo hall were some star wars fans: 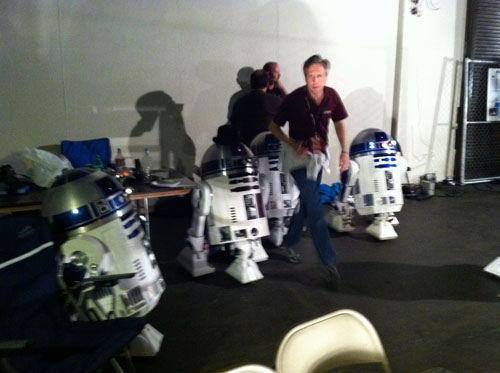 An Android/arduino hug robot:
An animatronic, life-size giraffe:
And, closing out the show, Arc Attack:
There were also terrific talks, including an amazing, mind-blowing one by MIT Professor Neil Gershenfeld. I was told that they will be up in the next few days on Fora.TV, and you should make sure to go watch his.

Maker Faire was freakin’ awesome. I’m deeply jealous of those in the bay area who don’t have to fly across the country to see it. That said, there’s one in New York in September, and I think Greg is going to come join me for the east coast version.