Mass Innovation Nights is a monthly product launch party for local Boston entrepreneurs. Each one is held in a different place, with this one (#MIN87) being at Bullhorn’s new headquarters on the 17th floor of 100 Summer Street, one of the many tall buildings in Boston with its own Wikipedia page. Fun Fact, 100 Summer Street is shown on the TV show Arrow as the company headquarters for the billionaire superhero Green Arrow/Oliver Queen.

Every time I go to one of these events, I get excited. Every time, I think about how far I’ve gone to be able to network with businessmen, entrepreneurs, and investors. Even the physical ride up the elevator makes me think about how I’m “rising” through the startup scene and meeting more and more influential people. 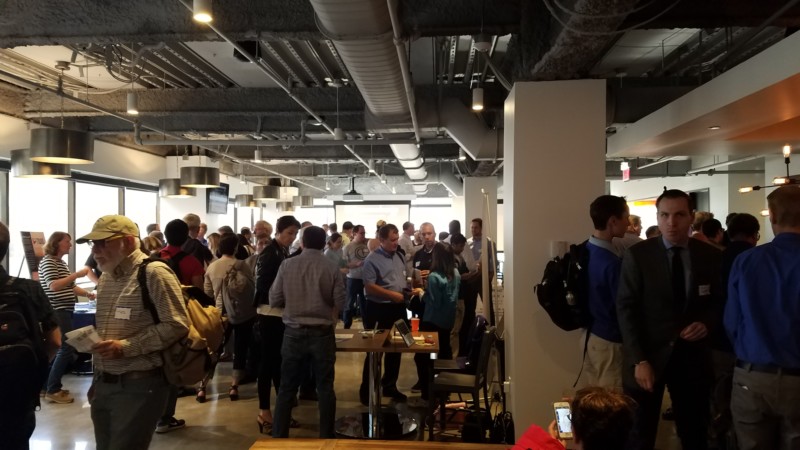 The center of the room was for networking, while the startups had tables lining up the sides. After I gorged on the cheese and crackers (this broke college student has been on a steady diet of chicken breast, ramen, and whatever free foods they serve at networking events), I made my way around the tables. In the “Student Startup Spotlight” were entrepreneurs from Bentley University, working on interesting concepts like Indian groceries delivery (Desi Cart) and an Uber for haircuts (MyBarber). My favorite startup of the night though was CharityCheckin. If you check into a participating retailer through their app, that retailer will donate money to a charity of your choice and CharityCheckin thanks them for their donation on your Facebook profile. For the user, it increases brand loyalty because you like how they donated money to your charity. For the business, it increases exposure because their donation on your behalf is shared to your Facebook profile. 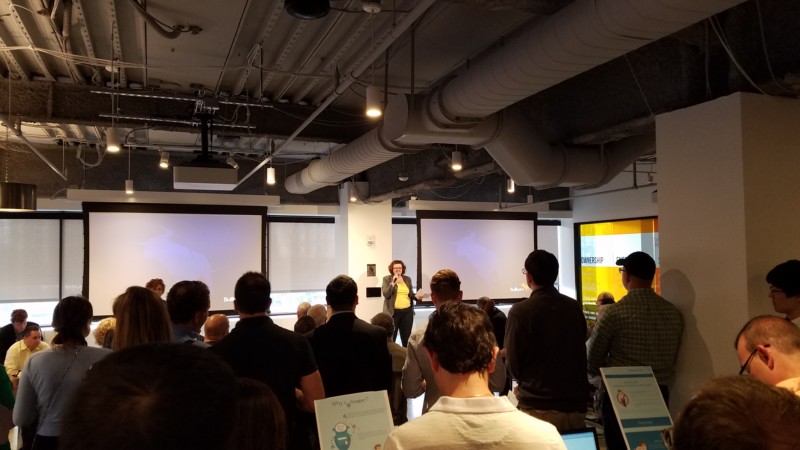 Bobbie Carlton, founder of Mass Innovation Nights, thanking Bullhorn for hosting us in their new headquarters.

After the event, I went through the full list of 700+ startups that have ever presented during a Mass Innovation Night to see if I recognized or had already met any:

Shareity lets you start a charity campaign and, any time someone donates, they earn a badge that they can display in their email signature.

PMS Bites, which was featured on Shark Tank just a few weeks ago, are treats with vegan, gluten-free, and organic ingredients and herbs that are tasty but have also been shown to reduce PMS symptoms.

JumpSmart, started by my friend Bryanne, is a flexible mat with lights and sensors that kids can program into any design or game they can think of.

CAKE helps you plan out what your loved ones should do after you die. Something most people don’t want to think about, but it helps give a peace of mind. The CEO/Co-Founder was also an MIT grad.

Anchor Nutrition Bar is a nutritious snack that prevents and relieves nausea from motion sickness, morning sickness, and medication side effects. Their founder and CEO, Neheet Trivedi, is an MIT Sloan graduate.

GeoOrbital made a wheel that can replace the front wheel of any bike and turn it into an electric bike. I met to their founders recently at TechCrunch DisruptNY.

Bounce Imaging is a virtual reality startup founded by an MIT Sloan graduate Francisco Aguilar. They made a softball-sized sensor ball that can be thrown into potentially hazardous areas and provide officers with real-time 360° video of that area for surveillance. I met them at a [email protected] event back in February.

Business on Tapp. I started used them some point last year, but didn’t know they grew out of Boston. They’re a community of entrepreneurs sharing awesome content around marketing, productivity, technology, design, and more.

Pavlok, a wearable device that zaps you in order to break you out of your bad habits. They were also featured on Shark Tank.

botkeeper, a startup that leverages machine learning to automate the recordkeeping of a business’s finances. I met those guys at the MIT Enterprise Forum Startup Spotlight 2016.

These are just a handful of the startups that have presented, the full list being here. It’s exciting to see startups that I’ve known for a while get bigger and smarter, which makes me even more excited to do build up a startup of my own. Thanks to Bobbie Carlton for putting this event together and letting me know about it and to Bullhorn for hosting it!