one day at a time

Last Thursday night, I was walking back from Simmons after making dinner at Pika for the first time. It was kind of cold, and I was tired, and I’d had a really long day, but with every step I took, I felt my heart soaring.

I’ve suddenly found myself busier than ever. In the past two weeks:

Despite all the hours I’ve added onto my schedule, I feel…more on top of things than ever? I think it’s because with everything I need to do, with the blank spots on my Google calendar slowly shrinking, it forces me to get started on things earlier and maximize my time. I can’t just lie in bed and scroll through social media for hours. In fact, I straight up deleted Instagram and Twitter for the time being because it wasn’t making me happy. And I still manage to have fun on weekends and do the things I want to do.

I thought this blog would just be a positive one (for once), but then I discovered that voluntarily hosing myself comes with another issue—when I do find myself with free time, I start to overthink.

There’s a part of me that knows I’m essentially keeping my brain distracted from the topics that can and will make me spiral. Sometimes those distractions don’t work. Sometimes I get back from an event and I collapse onto my beanbag⁠03 the nicest part of my room, in my opinion, right up there with my loft that has enough space for two mattresses and put on sad music and I relapse into mindsets and thought processes that I thought I outgrew.

I think that’s what stings the most, whenever that happens. It’s always the fact that I’m doing great, I’m starting to fall into healthier patterns, and then it’s like I accidentally pressed the big red reset button and I’m right back where I started.

I wanna get better, but I’m losing so much.

Two especially relevant songs: If It Wasn’t For The Nights by ABBA and Working for the Knife by Mitski⁠04 i’m seeing mitski live at radio city next year, actually, which is a story for another time—i managed to snag seven tickets for some friends and me, and they’ve absolutely ballooned in price since then, which is why it’s so insane that i managed to do that???? .

I got my business to help me through the day
People I must write to, bills I must pay
But everything’s so different when night’s on its way
It’s bad, oh, so bad

Recovery isn’t linear. Growth is a turbulent thing. I know that. But there’s a difference between knowing something and internalizing it.

This semester, I have struggled the most with feeling like a terrible person.

I’m bright and colorful the way an oil spill is.

Which is to say, I feel like toxic sludge some days. I’ve made decisions that have hurt me and hurt others, and I have to deal with those consequences. I have mentalities that aren’t beneficial for anyone in the long run. Sometimes I feel so deeply insecure in myself and my friendships that I feel like the ground beneath me will open up and swallow me whole.

But still, it’s weird, because like…my self confidence in other things is at an all time high. I love my body. I love my style. I love the things I’m part of. I love being social, and getting along with new people, and I’m told that I’m good at it.

A few moments this month really made me realize that. I have an issue with object permanence in terms of my relationships in that I assume they don’t think about me when I’m not with them. This is obviously not true, because it’s not like I cease to exist when I’m not around, but my brain tells me to always assume the worst. (Oh, they don’t really care about you.)

But out of the blue, I received a very sweet email from a blog reader telling me that they appreciated my posts.

There’s a lot of humanity reflected in your blogs, some unwavering truths towards yourself that I also resonate with, in my own way.

That shattered some of the barriers I’d been unconsciously keeping up. And then, a conversation with Daniel, who’s dealt with so much of my shit this month: 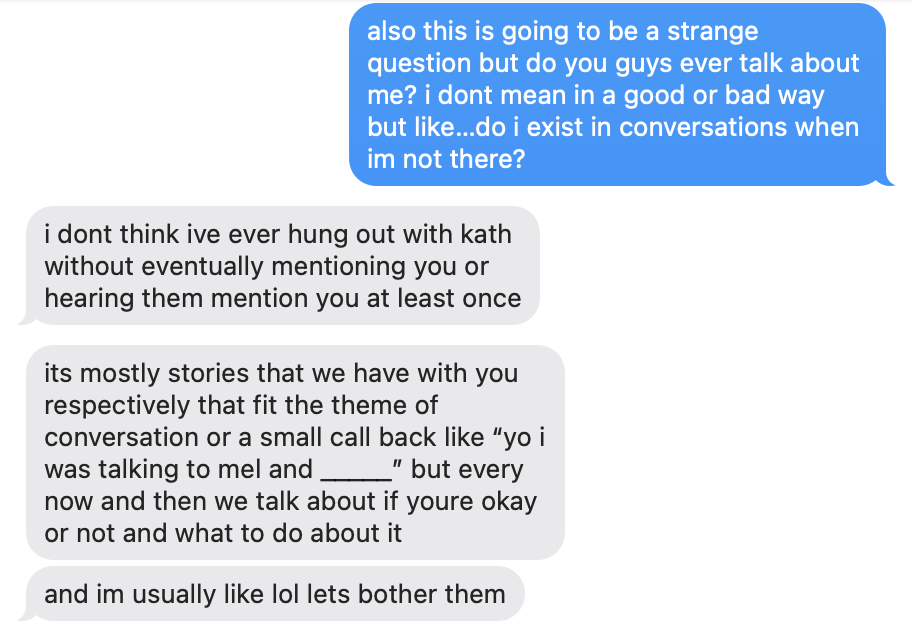 And finally, something unlocked inside of me.

There are people who like me as a person. And it’s kind of easy to dismiss that, with like, “Oh, if they knew the real me, if they knew all my worst feelings and secrets and thoughts they wouldn’t feel the same, and I don’t deserve it,” but the thing is, people don’t need to know all of you for you to deserve being liked.

I used to not believe people when they complimented me—I accepted them, but their words would glide off me like water on duck feathers. Now I’m learning to actually internalize it.