Picture this.
A pavement somewhere along the infinitely stretching Mass. Ave, swathed in darkness that small glowing arcs from streetlights partially cut through. It’s 1994, Spring, chilly. The wind is silently whistling through the air, striking fast-paced pedestrians clad in sweatshirts and unfeeling bulky vehicles whose owners are lost in thoughts of their destination.
Someone is walking down the pavement, hands probably snuggled in his pockets or crossed like esoteric bayonets from the middle ages. His stomach is not rumbling, but there’s enough flatness in it to proclaim the presence of an unimpressed hunger. It’s a hunger he plans to fix soon, the moment he gets to his destination.
He makes a turn to the left, his back to a five-story structure on which three Greek letters are barely visible. Up ahead, he sees the lights from a gleaming building. Maybe a few people walked out of the front doors that night as he approached the building, holding nylon bags that sagged under the pressure of salad plates or newly purchased deodorant or bottles of apple juice. Maybe he saw no one, saw just an entrance door silently beckoning him. Either way, he was almost there.
A few minutes later, he’s in a much brighter place, a large room sprawling with shelves and people and signs hanging from the ceilings. He moves around with purpose until he finds what partly holds the resolution to his stomach’s plight: a carton of Milk.
In that moment, he has come across an ancient creature, one that will hold within its warm, liquid and eventually unhealthy layers, the pride of a newborn tradition.
—
Nineteen years ago, a fairly lactose-intolerant resident of Random Hall decided to make Macaroni and Cheese for dinner. Deciding that a little carton of milk couldn’t possibly hurt, he made his way to Shaw’s, a grocery store, braving and somehow surviving the treacherous Boston weather. Being an MIT student, he bought the milk carton and made his way to his floor—Bonfire—only to realize a grievous error. He had forgotten to get any macaroni!
Ultimately, he decided that Mac and Cheese wouldn’t help him complete his p-sets or levitate objects and he could probably do without them. The milk carton, despite its cream-filled protests, was chucked into a refrigerator, in which a stretch of time found it confined.
The Bonfire Resident perhaps came across this carton a couple of times over the next few months, and probably figured, “Hmm, definitely not mine. I’m lactose-intolerant.” Other residents probably came across this curious carton and figured, “Definitely didn’t buy it. Would be so good on my plate of Cheerios right now, but I should probably just stick to my stuff.” The milk carton probably wistfully figured, “Gee, life sure is comfy in here with all these new friends—eggs and vegetables and bottles of fruit juice.” Alas, however, he was forced to constantly watch his friends get killed and replaced. Eggs cracked open to make omelet, shrieking vegetables chopped into tiny pieces by coldly grinning knives, bottles of drinks having their innards emptied into some container and forced into the barbaric insides of a thirsty human. Somehow, no one paid Milk any attention. He sat in there, slowly fermenting, braving the eldritch dullness of passing time.
Eventually, a few months later, someone took notice of Milk and stared at his expiration date—October 20, 1994. It had already expired, and belonged in the trashcan, but somehow, for some reason, Milk wasn’t so gracelessly disposed. Perhaps the wealth of disciplined persistence he’d built up over the months had come across to his finders in some way. Maybe MIT students just like to have fun and decided to see how long Milk could last.
Either way, Milk was let to live, and is currently one of the oldest and proudest residents of Random Hall.
—
Now, Milk holds a regal position in a lounge in Pecker (one of Random Hall’s floors) and like all noble characters of history celebrated for their virtues, Milk receives annual homage by all other Random Hall residents, to which I am no exception.
Just a bit over a week ago, we celebrated Milk’s nineteenth birthday. 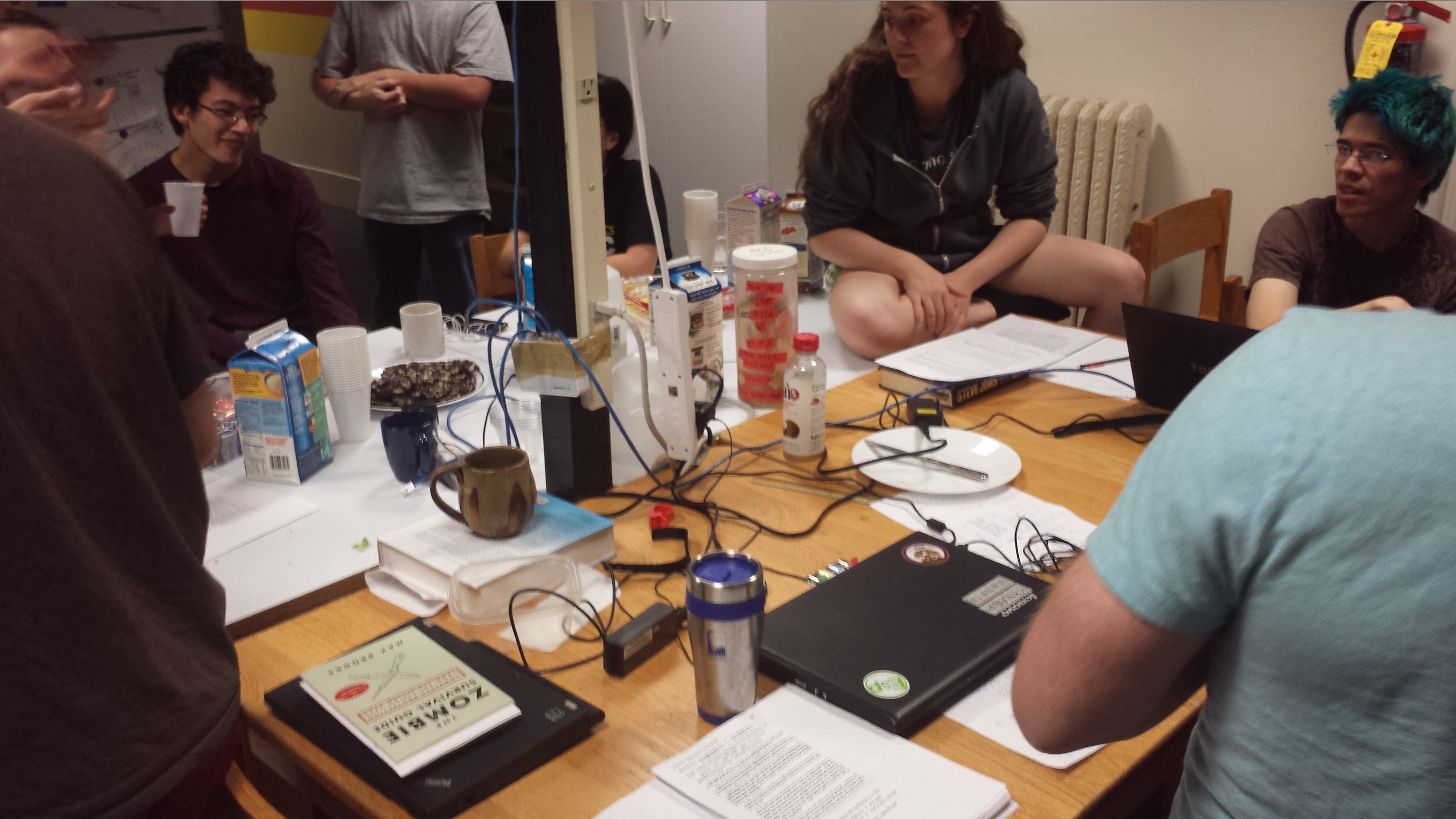 (Can you spot Milk? He lives contentedly in a single-walled jar.)
We drank milk—no, not our Milk!—which, now that I think of it, might not have been the best thing to do in front of a probably horrified Milk. We had cookies of deliciousness raised to the power of infinity. We talked about the prospect of Milk’s future—his future home, his future life partner. We wondered if he would benefit from having a companion, perhaps a bottle of wine that had been left to sit around for 19 years. Wasn’t it a lovely thought, having Milk and Old Wine sit side-by-side and tell stories of decade-long fermentation, bacterial action and build-ups of pressurized gas? Maybe they would have kids, little poisonous cups of milk-wine hybrids that would continue the Milk legacy. We considered the prospect of Milk’s education. Maybe he would benefit from an MIT degree in whatever major his little, fermented heart desired.
I bet Milk listened to us talk about him with a mixture of appreciation for our concern and annoyance because of our daring assumptions. How did we know he wanted a degree from MIT? How did we know he even wanted to hear funny stories from a bottle of Wine, no matter how nice and old the bottle was?
It didn’t matter. We discussed Milk with affection, thought of his brave past and his potential-laden future. We even had problems dedicated to spurring us into thoughts as complicated as the origin of Milk. 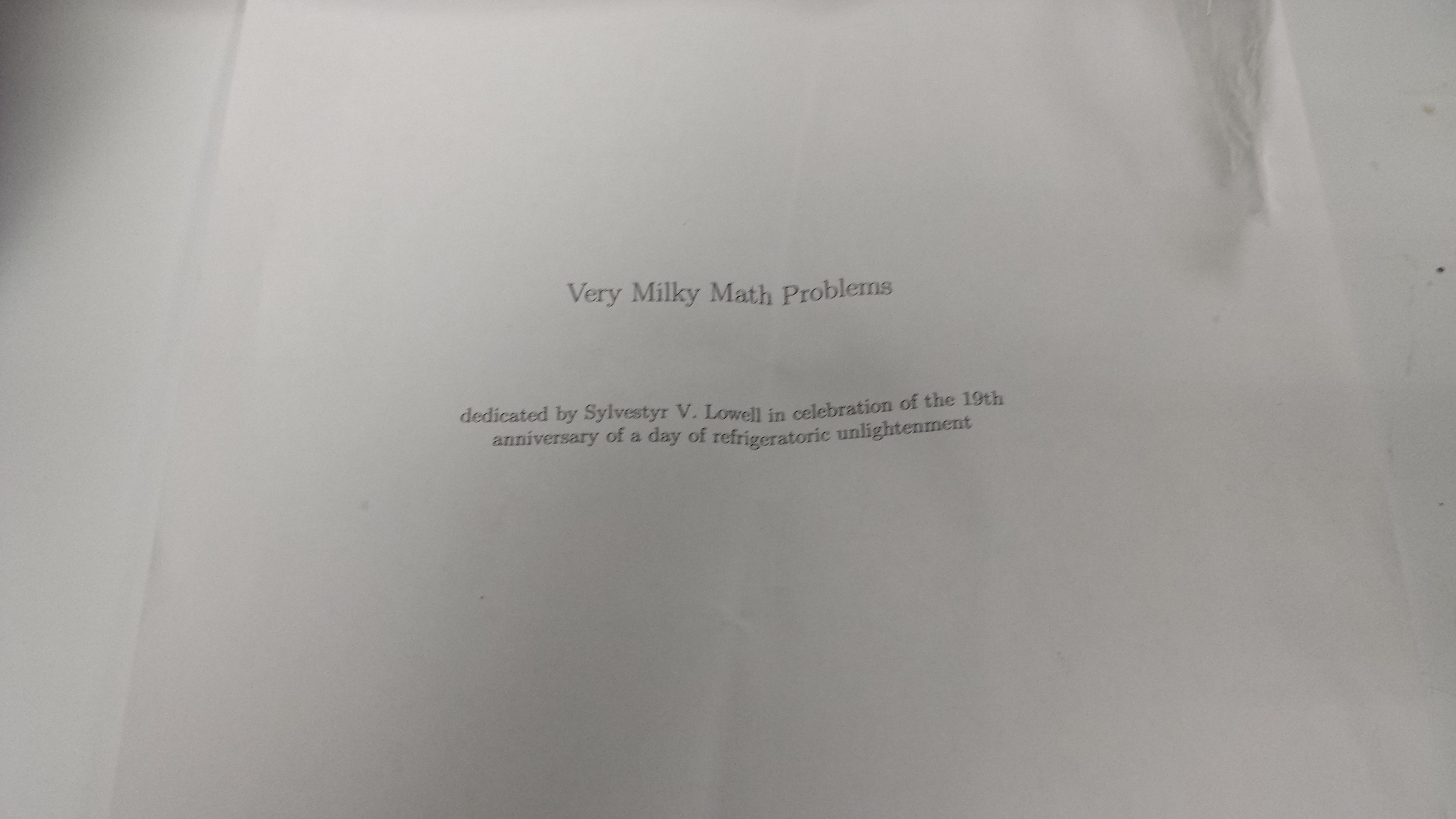 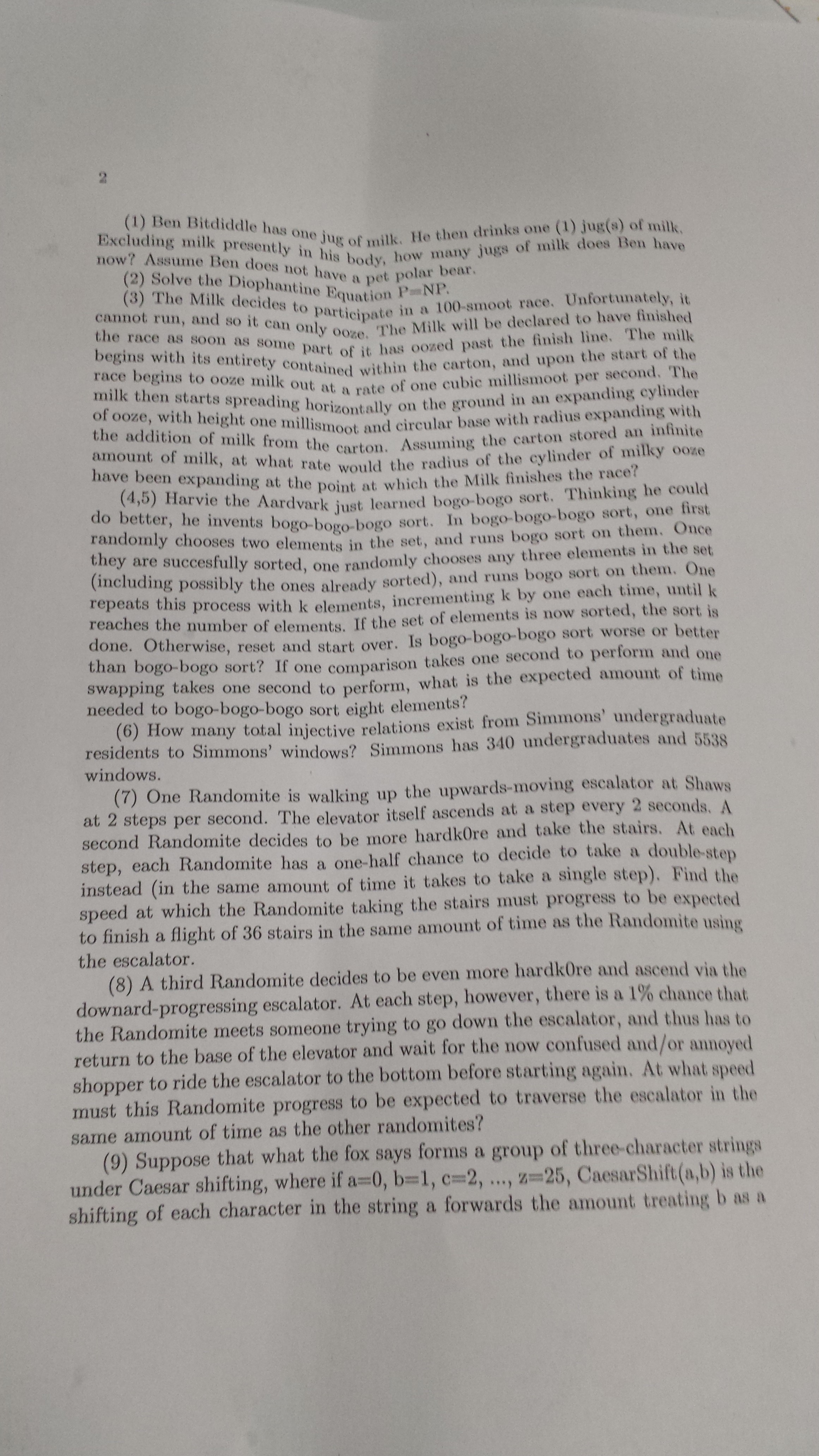 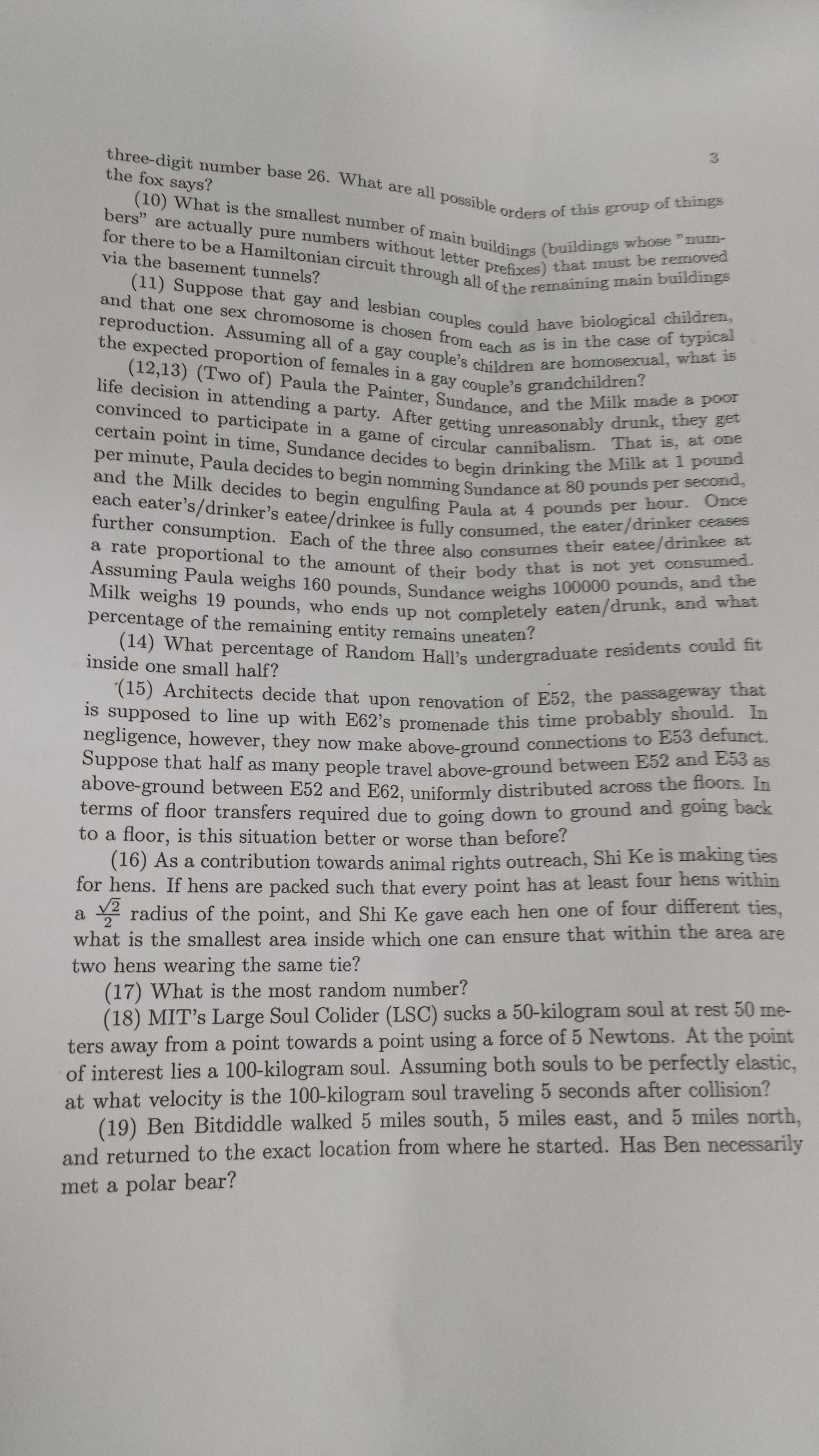 This tradition is definitely bound to stick around for a long time, and to think it all started with a simple desire for macaroni and cheese.
—
A great darkness rides over the horizon, its scaly hands of despair reaching towards us, inciting fear, invoking chills. From the distance, someone shrieks.
Even in these gnawing times, hope exists…somewhere.
There is very little I can say here. To understand just how severe the situation is, you must listen to me.
Listen carefully…
Observe…
(P.S. I was super-tired when I made this video and probably come across as a robot-zombie hybrid. Oh well).
Hurry.
Find it.
Not much time is left.