i am proficient at two (2) of these things.

Hello World! I haven’t posted in a while – life has been busy, between classes and studying and sleeping and eating and doing things other than those I just mentioned. I have, however, been able to do some pretty cool things with my time. 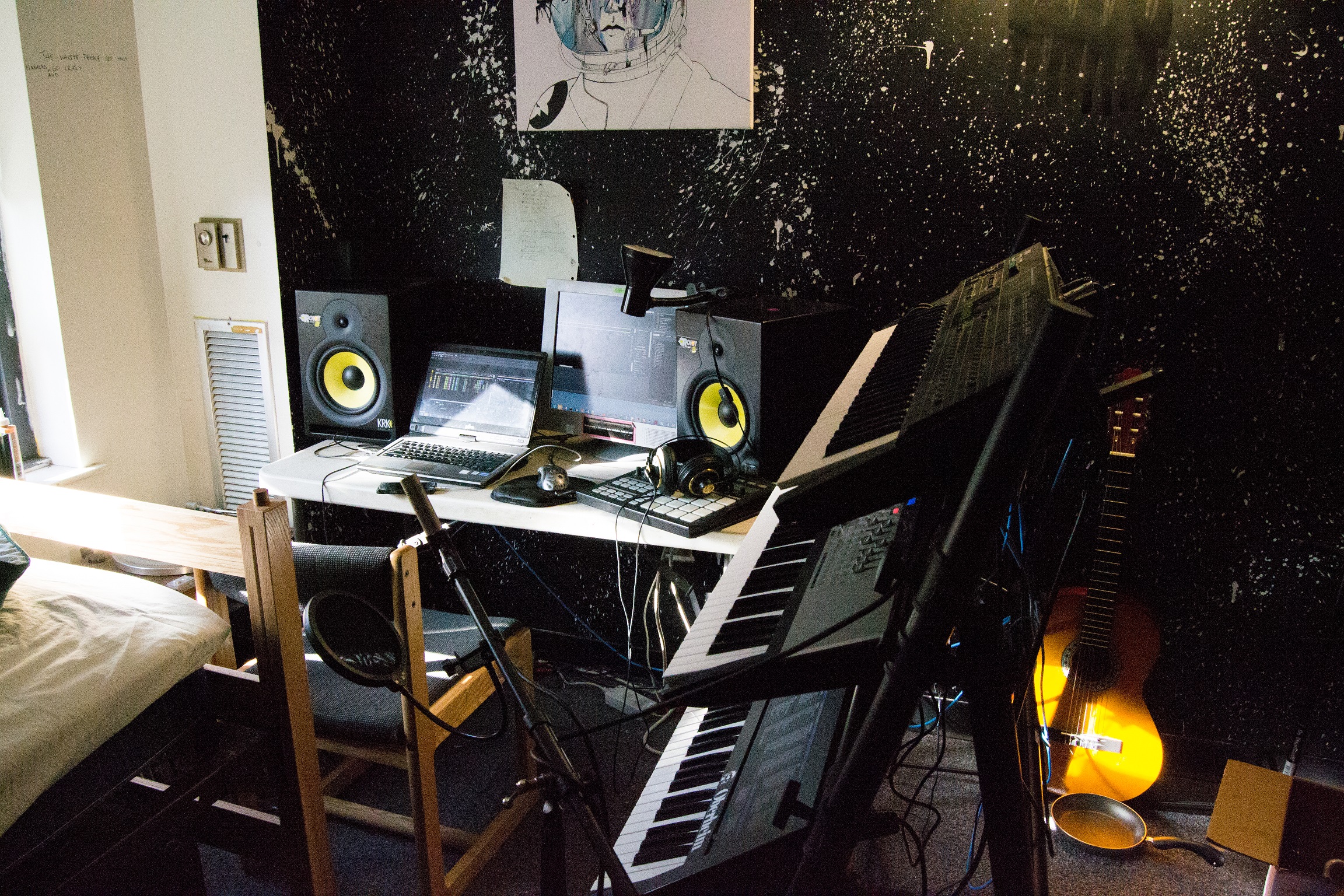 So I finally cleaned, and more importantly, reorganized my room. After attending a synthfest in the Media Lab a while ago (basically just a gathering of a bunch of people with really nice synthesizers to play with), I realized how much I missed my synths from back home. Luckily, I live close enough to home so that when my parents came up to visit a few weeks ago, I asked them to bring along my keyboards. As you might have guessed, I’m in that chair pretty often! I’ve been spending a ton of time writing music lately – MIT is definitely an inspiring place artistically.

For my Jazz History course, I’ve been listening to a lot of jazz, and that’s definitely been reflected in some of the music I’ve been writing lately. Here’s a little (incomplete) demo of something I’m currently working on, with some sort of jazz-type influence.

Other than jazz, I’ve been into a lot more strictly electronic music, too – the new Aphex Twin album, “Syro”, has been had a pretty big effect on me. Here’s another (silly) demo of something more “IDM”-ish I wrote recently.
So besides music, I’ve also had the opportunity to take a ton of awesome photos for my photography seminar. I have 24/7 access to the darkroom in the Student Center, and I’ve definitely been in there past midnight developing photos already. I have a friend that I usually shoot photos with, and one evening we went out on to the Mass Ave. bridge and shot a bunch of photos of this under construction building that’s way down the river. This is a picture I took with my phone of a film print, so a lot of the quality is missing (I need to find a scanner!). 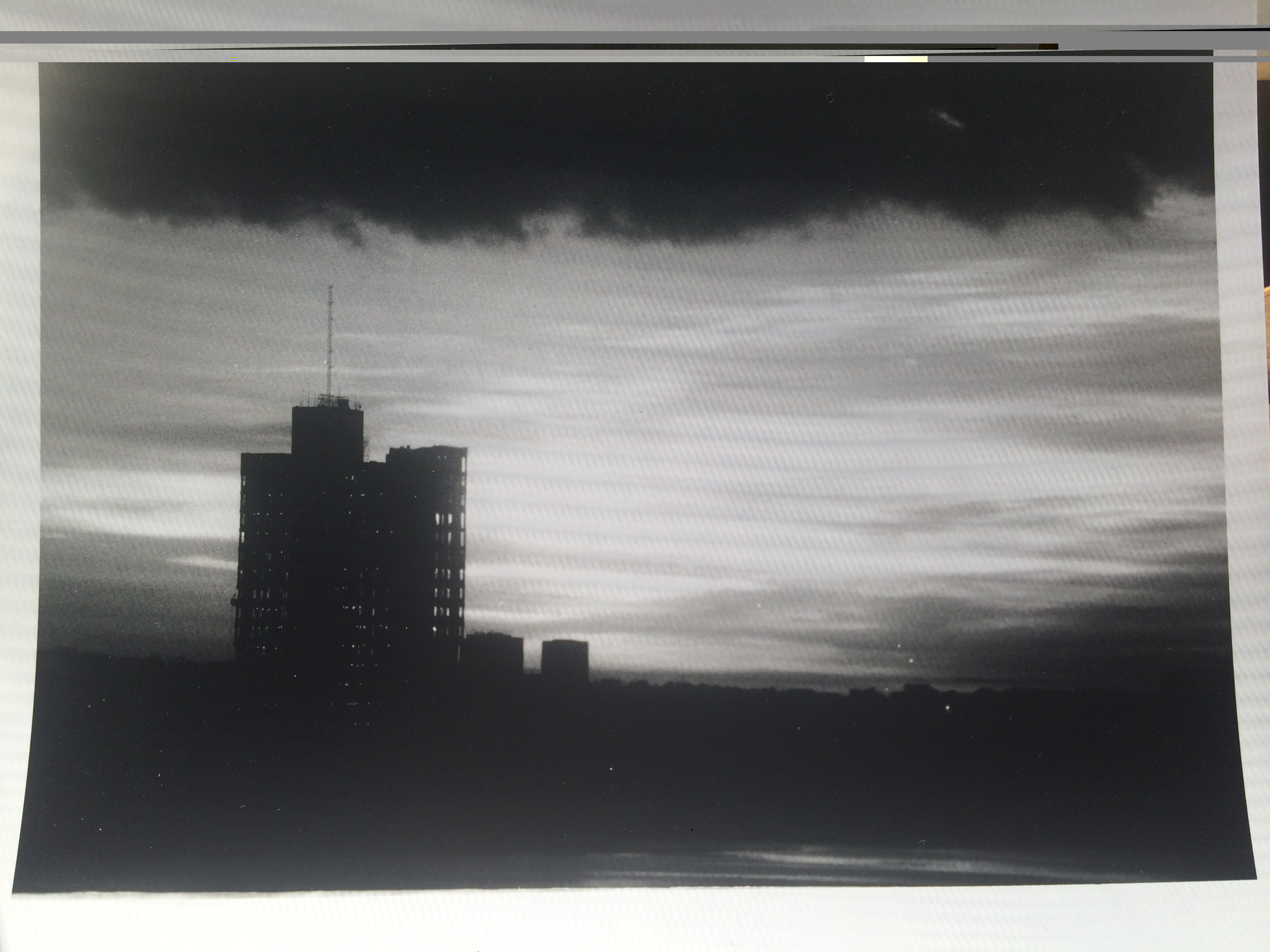 What’s really neat about this shot is that you can actually see the sunset through the windows of the building. I had to go through several tries to print this photo – the contrast was pretty tricky to get right, but I’m pretty happy with how it turned out.
Other than film photography, I got to try out playing with a strobe a few days ago in class! The Edgerton Center has loads of awesome resources, and we were able to use a strobe light to take photos of milk drops, like the photo Harold Edgerton took in 1936. Basically, you turn all the lights off in the room, open the shutter on your camera, release a drop of milk, and at the moment it strikes the surface of the table, flash the strobe. Obviously, there’s a lot of timing involved with this, but if you get it right, the result is awesome. 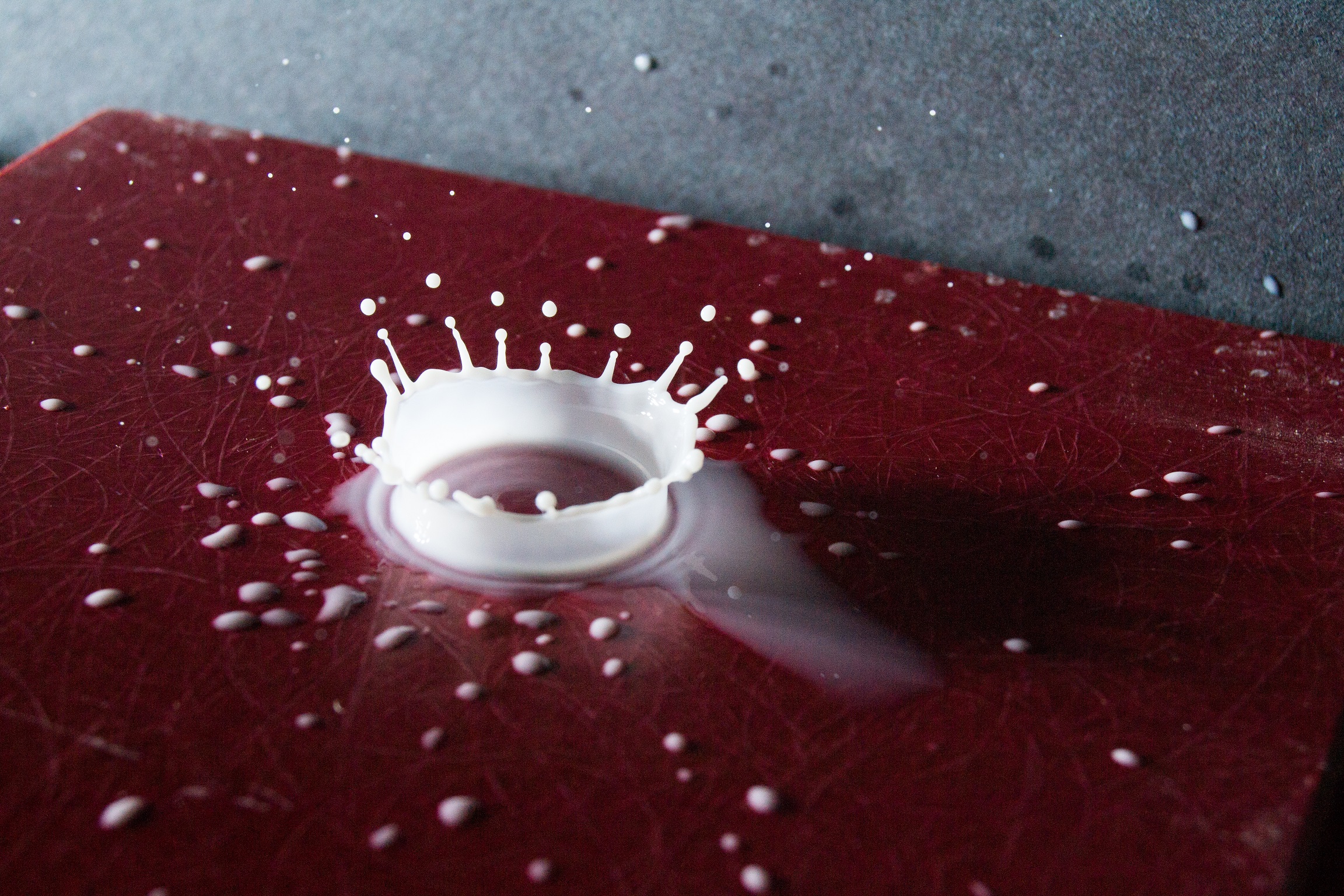 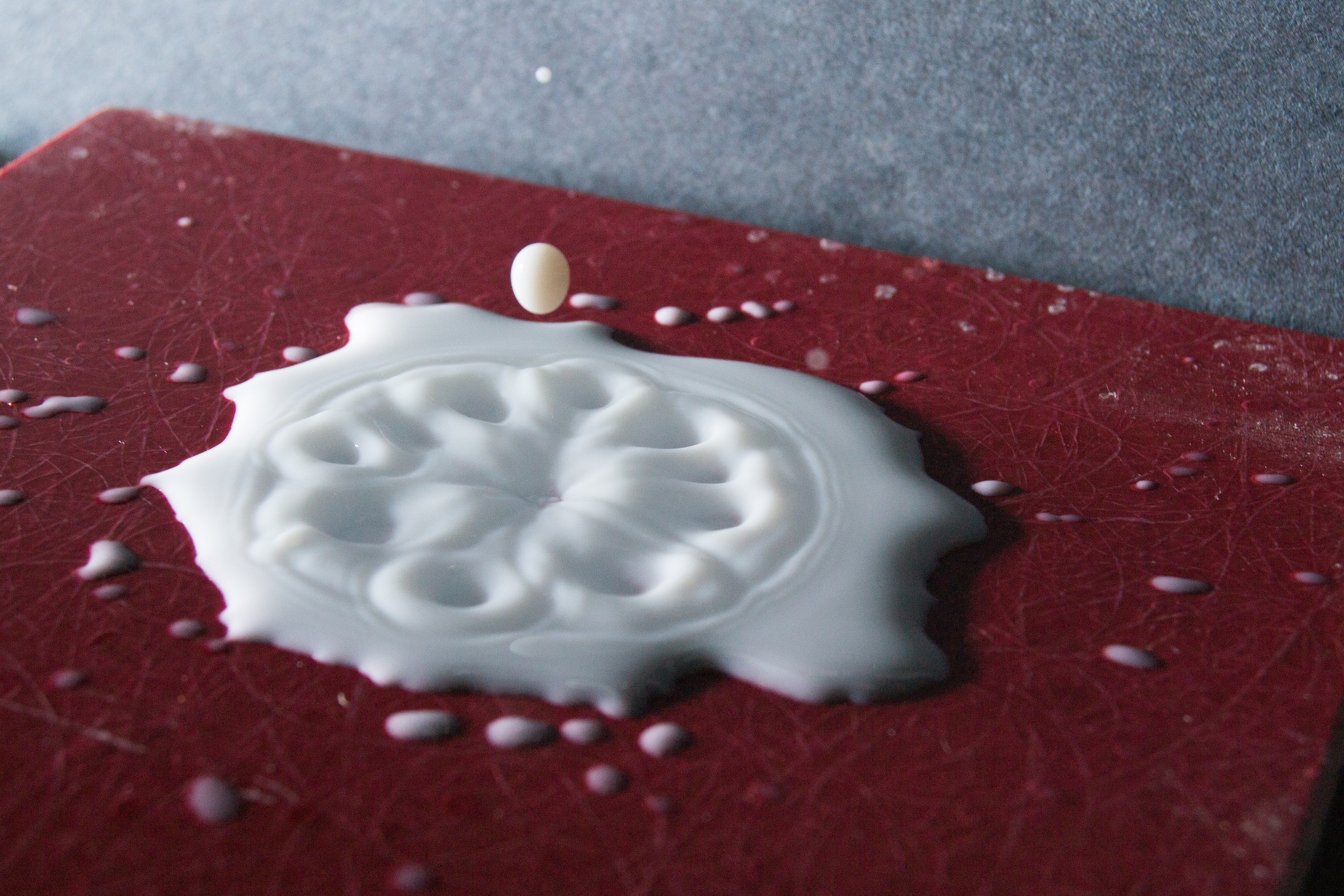 For the second photo, there were actually two drops of milk – it’s a double exposure. The first exposure captured the rippling on the surface of the milk, then the timing of the strobe was adjusted, and another drop was released, which captured the drop before it struck the table. Pretty cool stuff (although I do for some reason find the photo to be somewhat unsettling!).
Finally, I arrive at Two.js. Basically, Two.js is an API that allows you to use Javascript to do neat 2-D animations in web browsers. Now, I’ll preface this with a warning. I like to think I know how to program. I spent last summer working at an oceanographic institution (WHOI, which MIT actually has a joint program with!), working on programming for sonar data. I have never before, however, touched web programming, so proceed with caution. I’ve hosted on my github.io page what my messing around with Two.js has accomplished, which is in short, very little. Proceed with caution.
Or for those of you who would rather just see a picture, 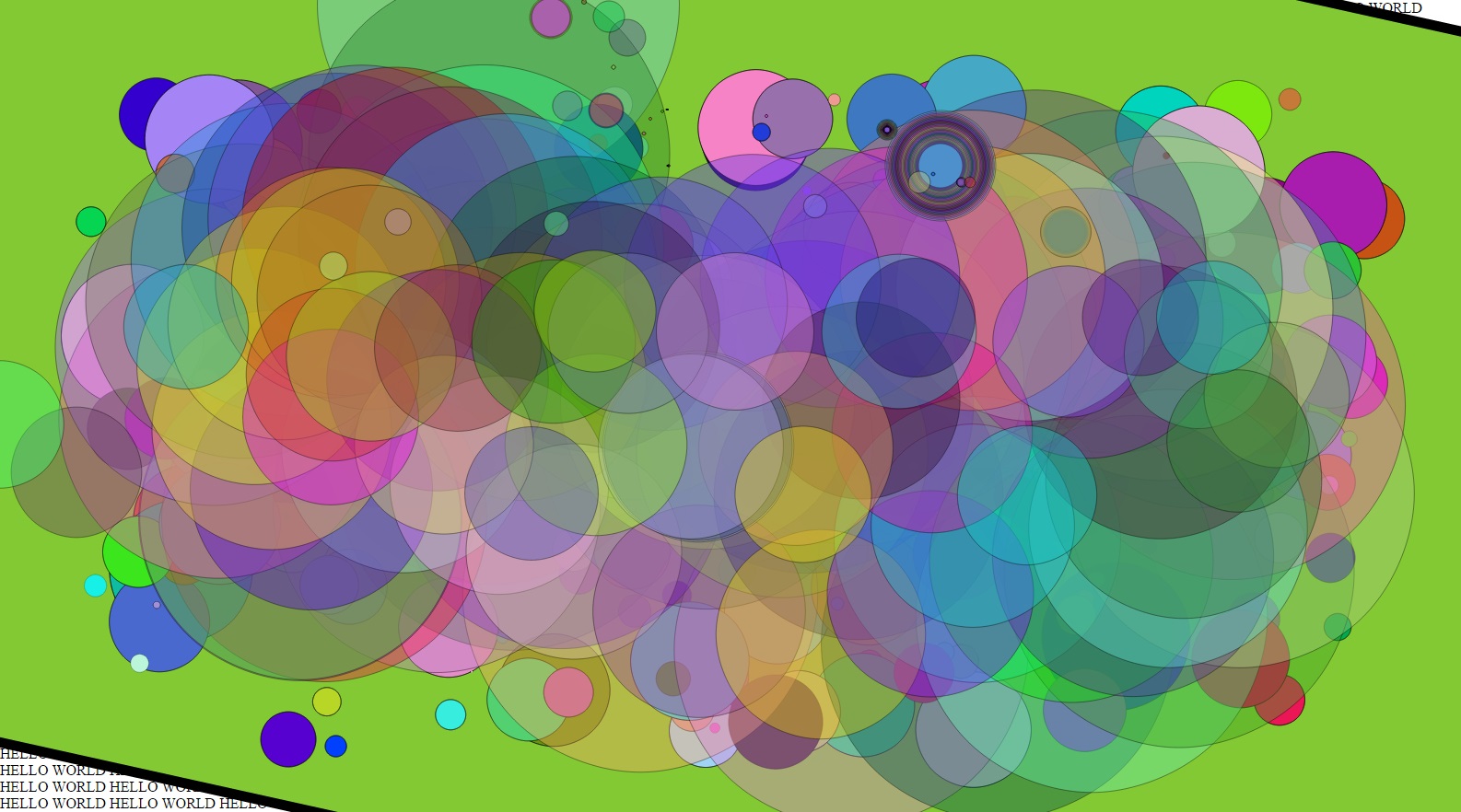 So, my next project is to learn HTML/CSS. We’ll see how that goes.
That’s it for now, I’m off to work on some music. Thanks for reading!

I’m Joe. My favorite show is The Office, and I’ve seen every episode at least five times. Apart from that, (that’s the main thing, though), I do a bunch of other things. I’m from the scenic “island” in Massachusetts known as Cape Cod, where I spent a lot of time sitting in my room doing stuff I thou…
Keep Reading