My Least Responsible Purchase by Snively '11

I'm an impulse buyer but THIS was a bit much

I saw my first Tesla in July, 2009. I knew what Teslas were but it was before Tesla REALLY took off.  It was a Tesla Roadster and I was awed by its 0-60 in 3.9 seconds and it being all-electric.

2 years later I graduated from MIT and a year and a half after that I moved to Oregon for work.  I found a real estate agent, found a lot, and built a house in 2013.  $11k down gets you a $205k house.  As my house was nearing completion 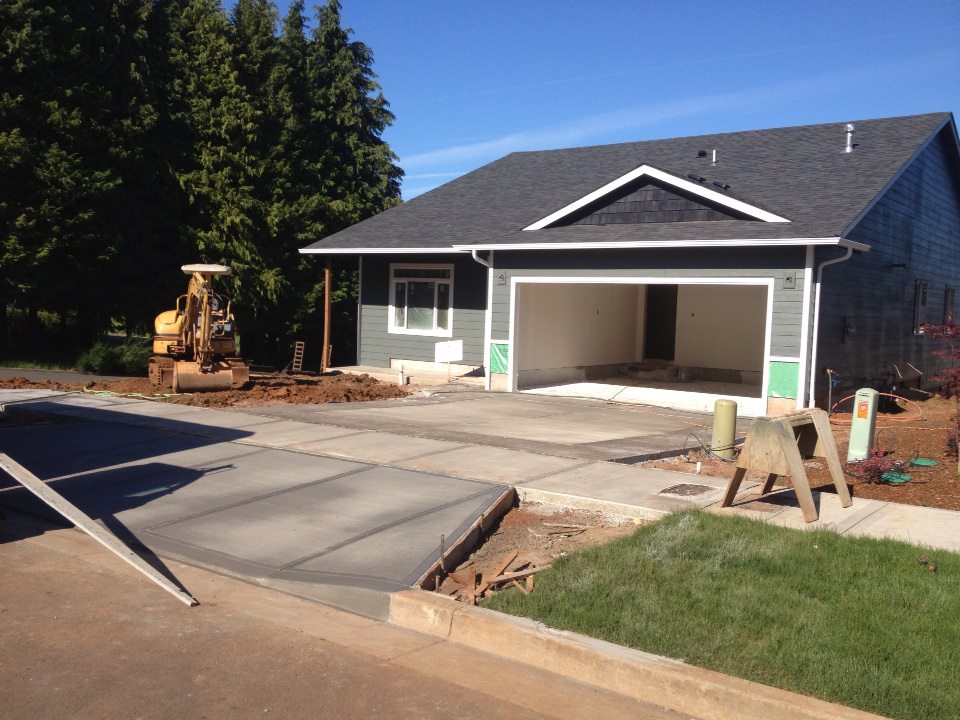 my real estate agent swung by to check on the progress.  She was driving a Tesla Model S 85.  I drooled at it.  I stole glances at it.  I fell in love with it.  It was the second Tesla I’d ever seen up close and in real life.

“You should get one!” she returned

“You can afford this!” she said.

She was wrong, of course.  I could definitely not afford a $100k car, but I spent the next several years following Tesla and wanting one.

I took a job 1.5 hours north of where I lived not long before Tesla rolled autopilot out to its cars.  My desires grew deeper.  Being able to just sit and not worry about stop and go traffic was a dream like no other.  Every 2-3 months I’d use the configuration tool on Tesla’s website to see if I could afford one.  The math never worked :(

In late 2015 I accepted a job in Fort Wayne, Indiana and left my job in Oregon.  Part of the moving-to-Indiana process involved selling my house.  I called the real estate agent I used to buy it and we got it listed on the market for $250k.  Not a bad amount of appreciation for 2 years of ownership! The SolarCity solar panels on the roof certainly helped ;) We got an offer in December and, after realizing that I was about to have $50k sitting in my checking account, I used my real estate agent’s referral code and put down a deposit on a Tesla Model S on December 30th, 2015.

I’d always told myself that if I won the lottery I’d buy a Tesla.  Selling a house and having $50k worth of equity plunk into my checking account was about as close to winning the lottery as I’d ever get so I followed through on my word and bought a Tesla.  The buying experience was awesome – I walked into the Portland Oregon gallery, walked up to the counter, and said “I’d like to buy 1 car, please.” I configured it on their iMac, typed in my credit card info, hit submit, and all of a sudden I had a Model S reservation for a red 85D.  As a thank you they let me walk out of there with a free jacket, two free coffee cups, and a free hat. 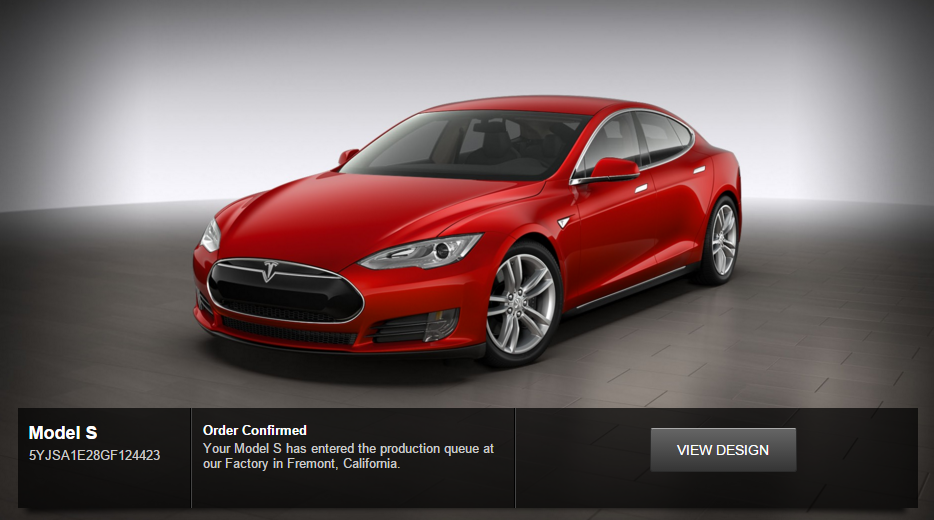 I set delivery for late February in order to make sure the house was sold and I had the money in my checking account by the time it was due.  Remember, I just had an offer on the house, it hadn’t actually sold.  Well, in late January, just after a Disney World trip and just before the move to Indiana, my buyers withdrew their offer.  All of a sudden I had a house to sell again, I was on the hook for a $94k car, and the moving trucks were headed east in 4 days.  We immediately re-listed the house and, fortunately, it immediately sold (less than 12 hours) for far better terms (I didn’t have to pay closing costs).  Unfortunately, even with closing in 30 days, I wasn’t going to have the money I needed for a late February delivery so I had to push it back to April.

In March Tesla discontinued the 85kWh battery (the one I ordered).  I received a phone call that layed out the terms.  “Either take delivery immediately and get the battery you ordered OR wait until your scheduled delivery date and upgrade to a 90kwh battery for $3,500.”  This struck me as really really unfair considering I had no financial means to immediately take delivery (house hadn’t closed) and was essentially being forced into upgrading to a 90D.  In the end, I upgraded, but not without a lot of grumbling.

In April, as I was getting really really eager to take delivery of my car, I checked the status of my order and delivery had been pushed to late May.  I nearly lost it.  I’d ordered in December and was now facing the prospect of waiting 5 months for my car when I thought I was within 2 weeks of taking delivery.  As it turns out, my reservation narrowly made the cut and became a part of the new and refreshed Model S that was released in April/May.  My order was delayed while they created show room models but soon they were done and it was time to make my car :) 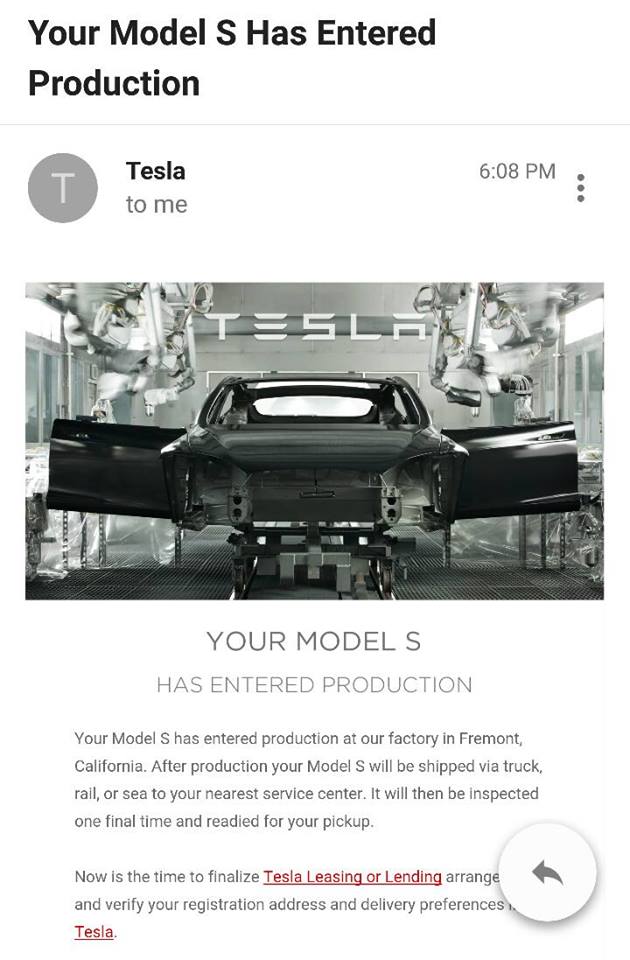 I got an e-mail in May that it was time to take delivery.  A few things had to happen leading up to taking delivery.  The two most notable:

1) I had to make my downpayment.  This was the moment when I clicked a button with the word “Transfer” on it and watched $50k evaporate from my checking account.  It was awful :(

2) I had to trade in my trusty 2011 Honda Civic.  It had130k miles and had served me well but I drove it to Chicago and bid it farewell. 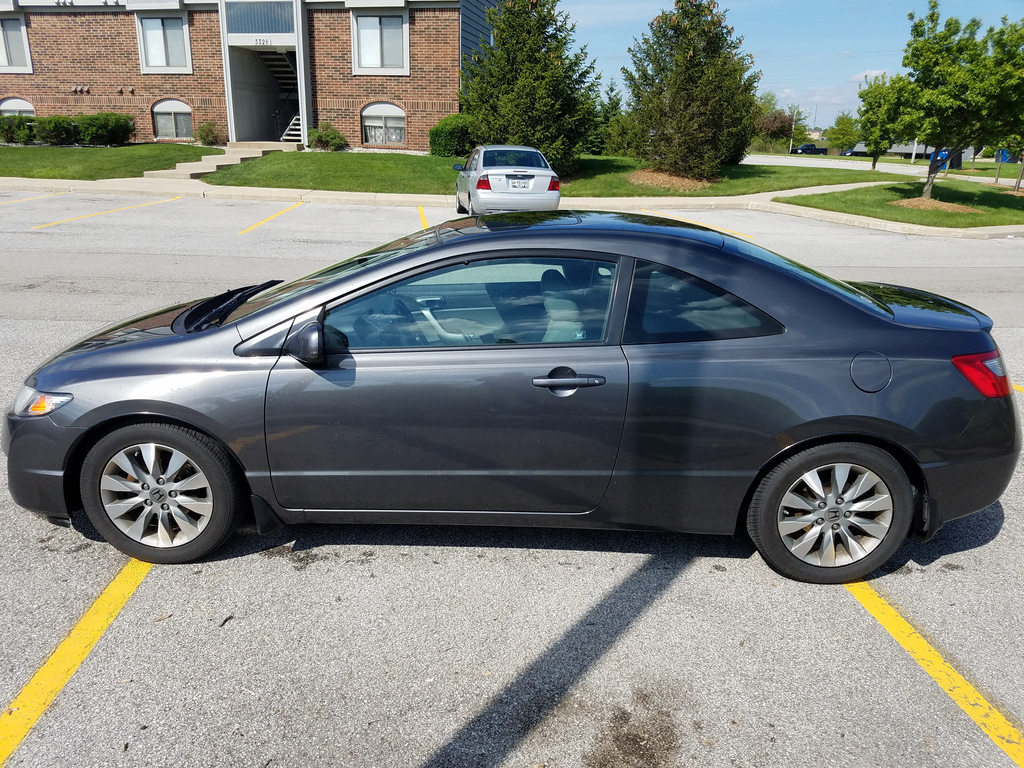 My car arrived at the Tesla store in Portland, OR and I had to wait an entire week before my flight out to retrieve it.  In the meantime I had my delivery specialist send me pictures of it waiting for me. 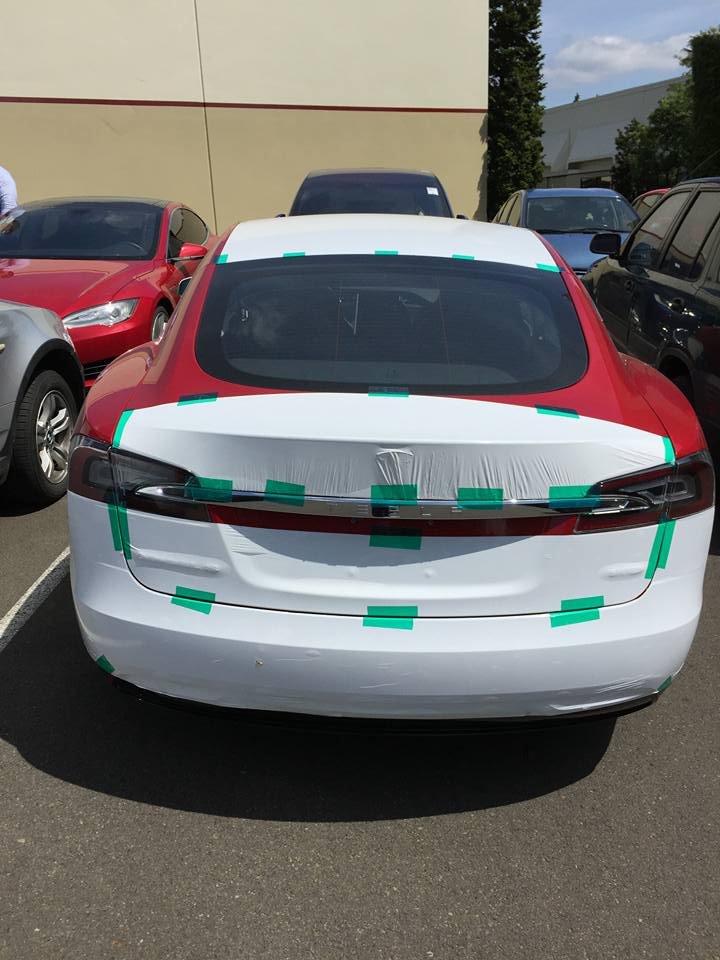 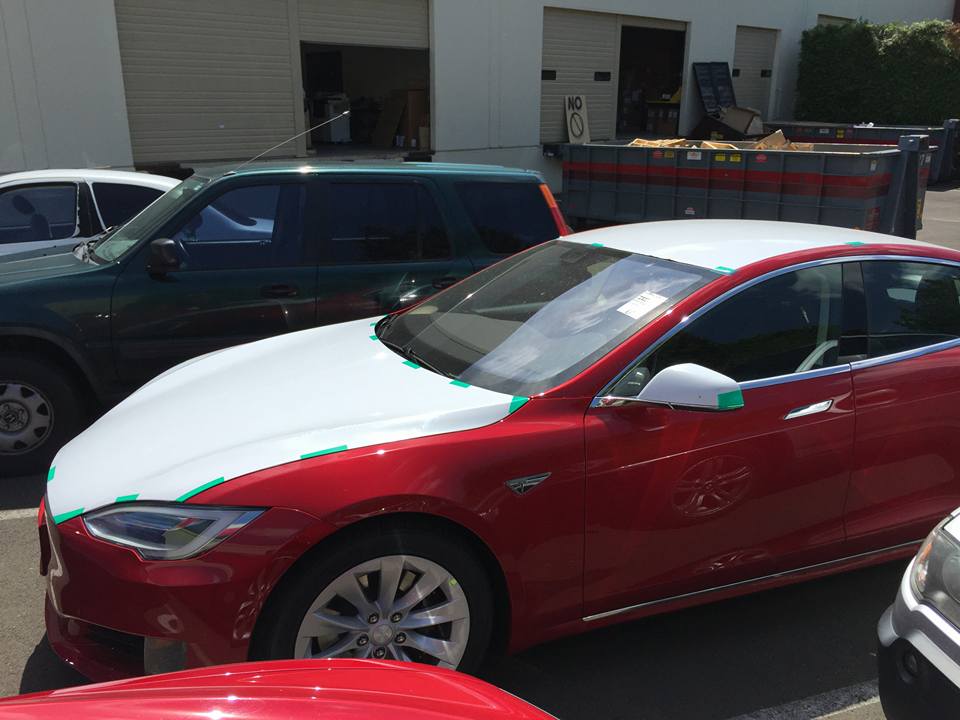 Eventually the day came! I flew to Oregon with Bianca, stayed the night with my parents, and drove up to Portland the next morning to pick up my new car. 5 months of waiting had finally come to an end! 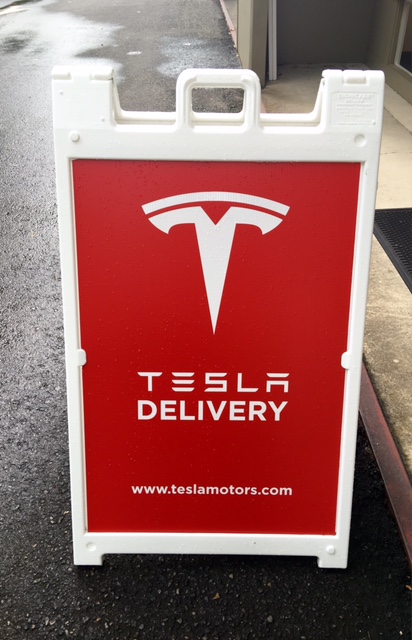 We showed up, they rolled up the garage door 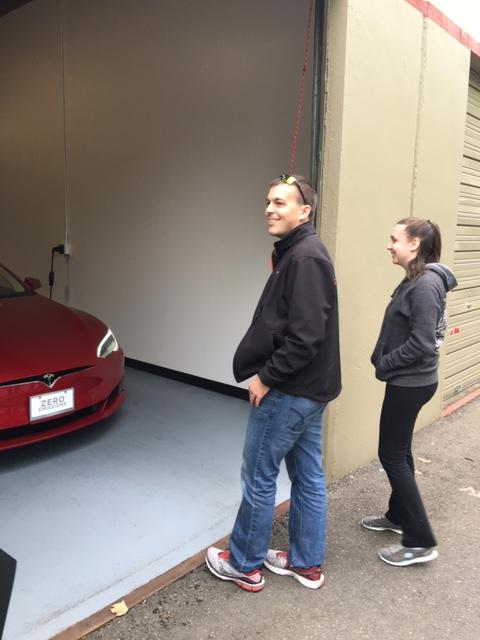 and this is what was waiting for me. 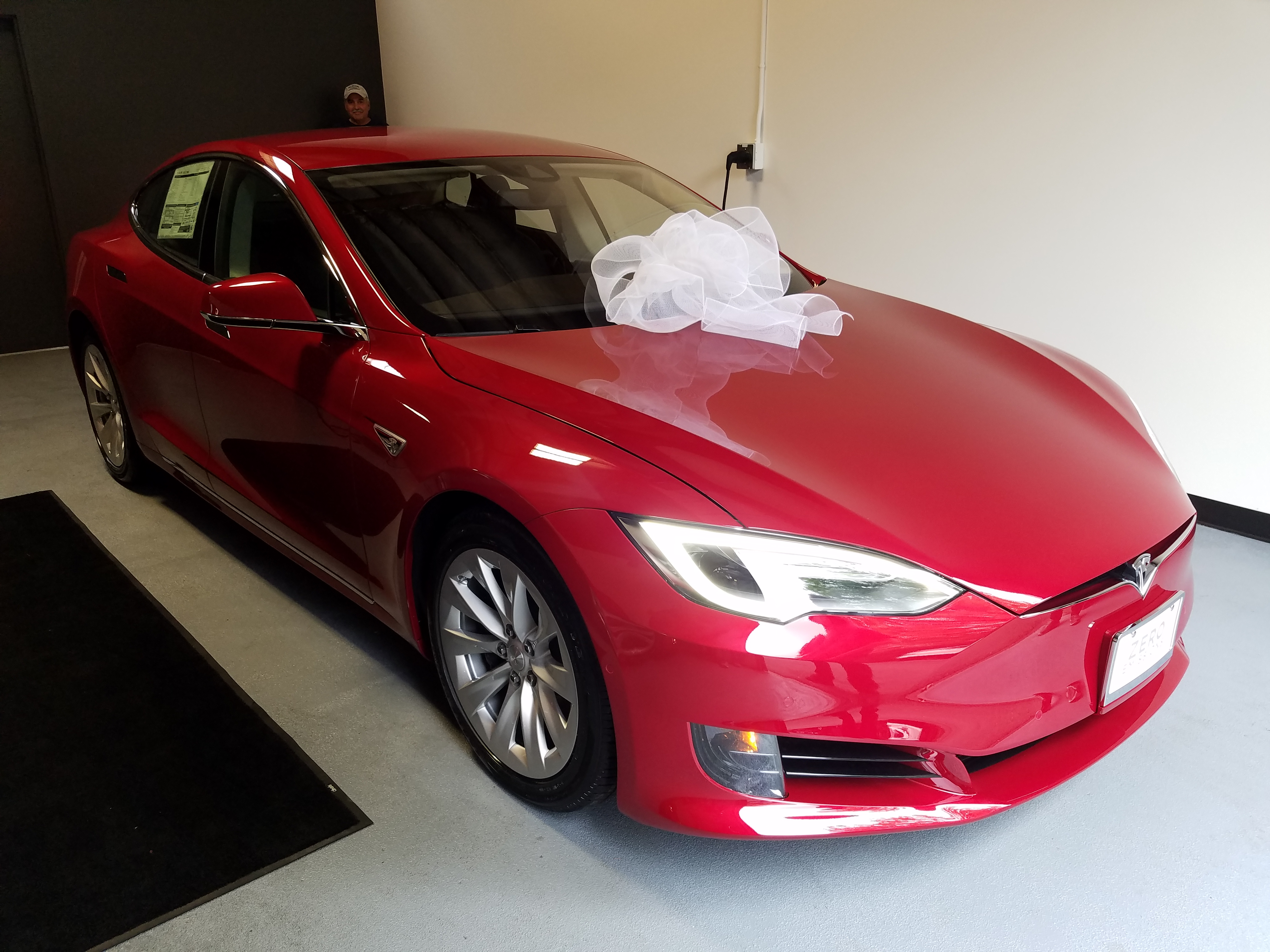 It was so awesome!  Seriously, so awesome! I went all around it, admiring everything.  The first thing we did was install the all-weather floor mats that I’d bought.  After that I sat in the front seat and had the Tesla rep brief me on how to dive and operate the car. 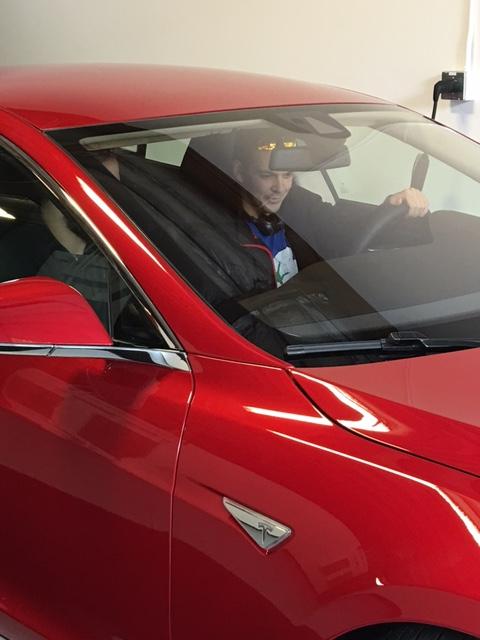 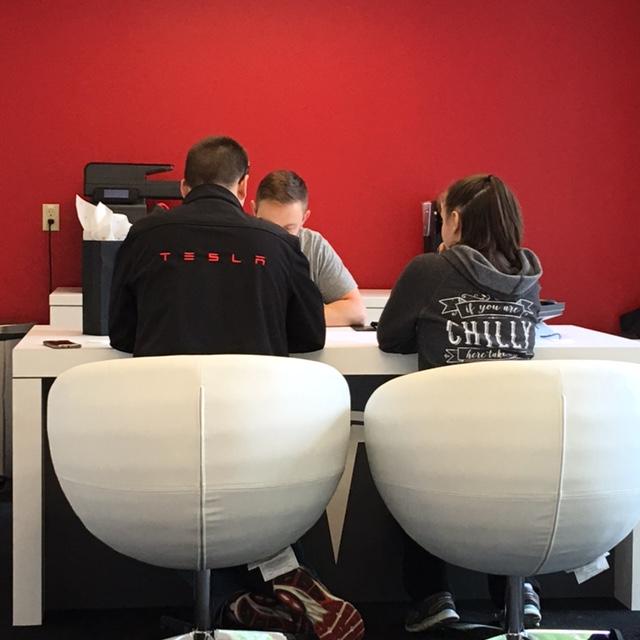 we took off to go show my grandma the car.  After showing off and dropping my  parents back off at their car it was time for Bianca and I to run Burble through his paces and drive him from Oregon to Indiana.  We had 2.5 days in order to make it back without missing any work :)

We used Tesla’s supercharger network to get us home. 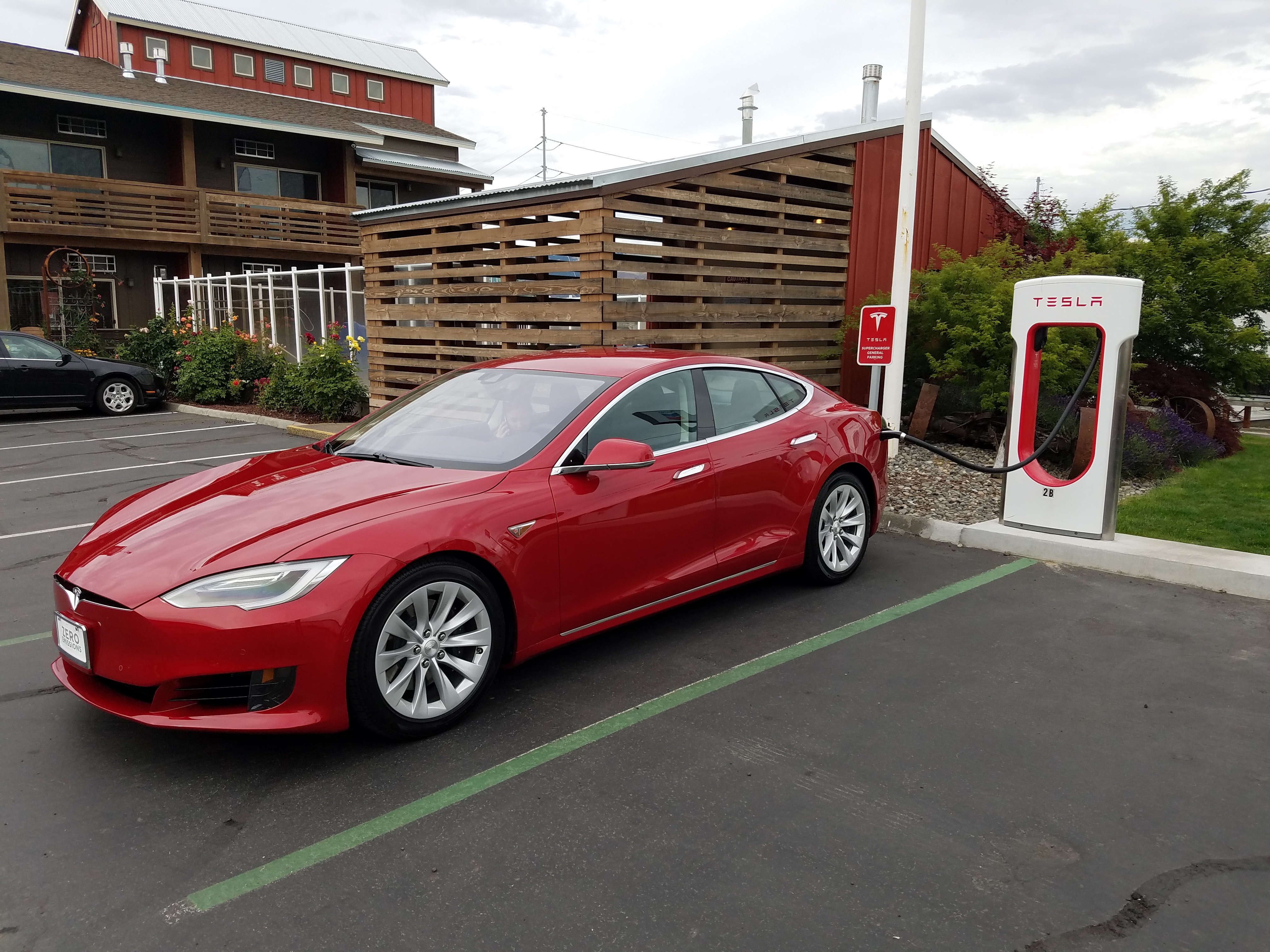 We took turns driving (well, autopilot did most of the driving, but we took turns in the driver’s seat) and drove night and day to get home. 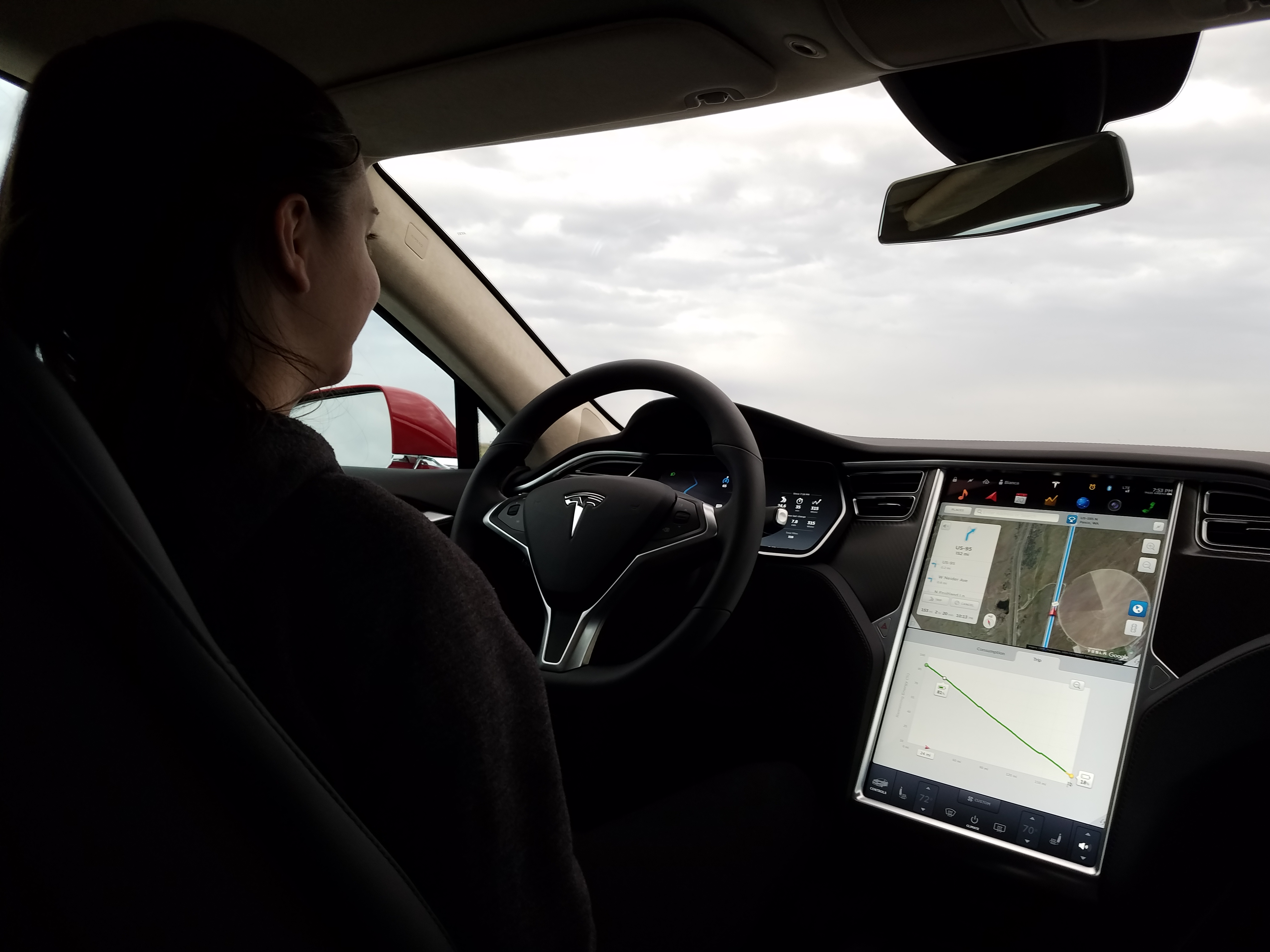 The autopilot really made the drive far less awful than it could have been and we had a great time playing with all the new features, bells, and whistles.  We even got to see Mt. Rushmore during our trip! 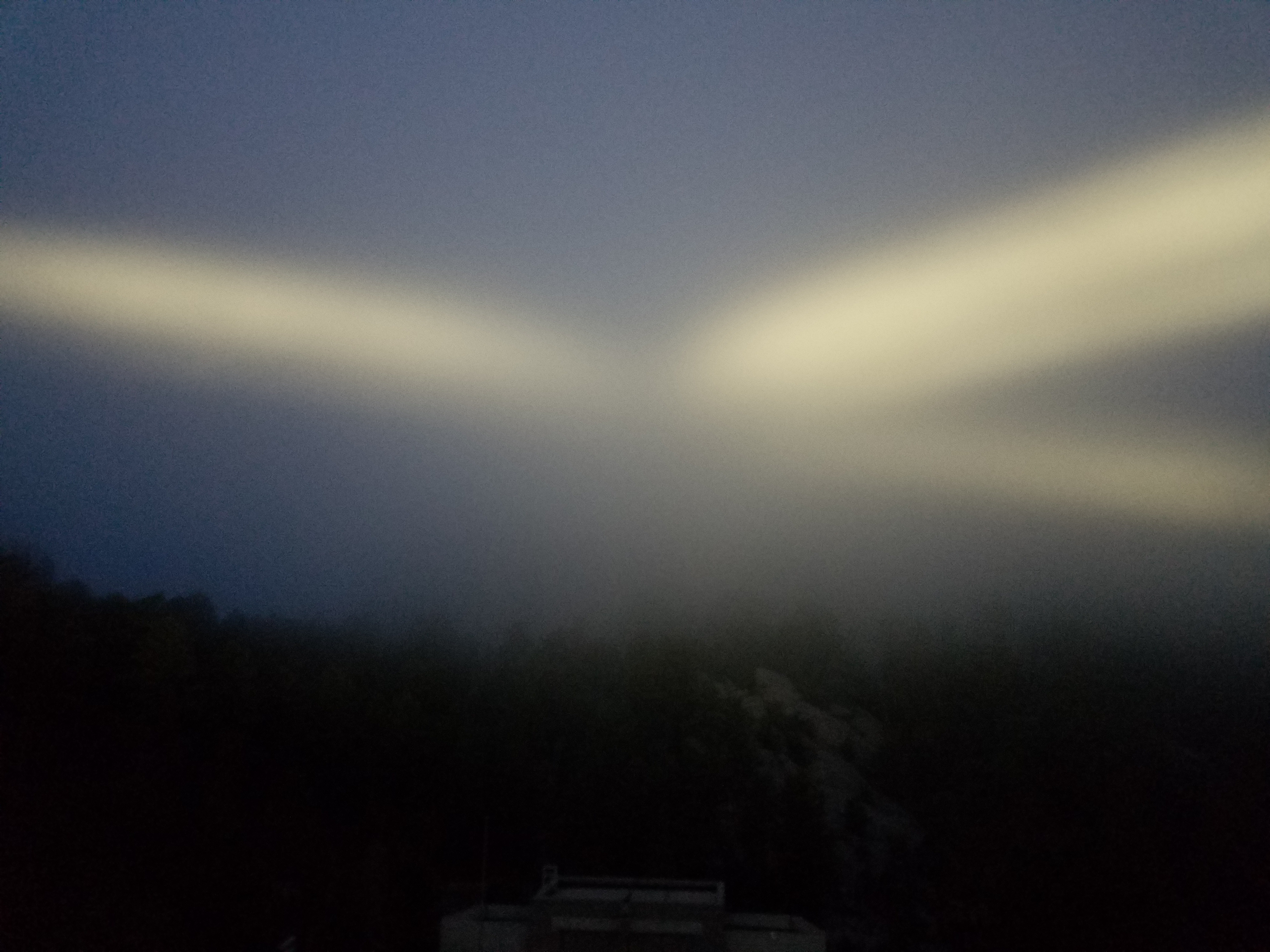 We rolled into Indiana on Sunday evening around 10PM after a successful 2,500 mile road trip.  Burble pulled it off beautifully.

Now, about 7 weeks later, Burble has 6,600 miles and is going strong!  I still wash him about once or twice a week by hand and he’s just as fast as ever (0-60 in 3.9 seconds).  Bianca and I find ourselves just driving for the sake of driving, blasting music, and having mini dance parties in the front seats.

Spending $50k on a car was absolutely the wrong financial choice to make BUT – I love my car and have zero buyer’s remorse.  Every day when I walk outside and see it waiting for me I smile :) If you’re even sort of considering buying a Tesla and you have the means to do it – do it. 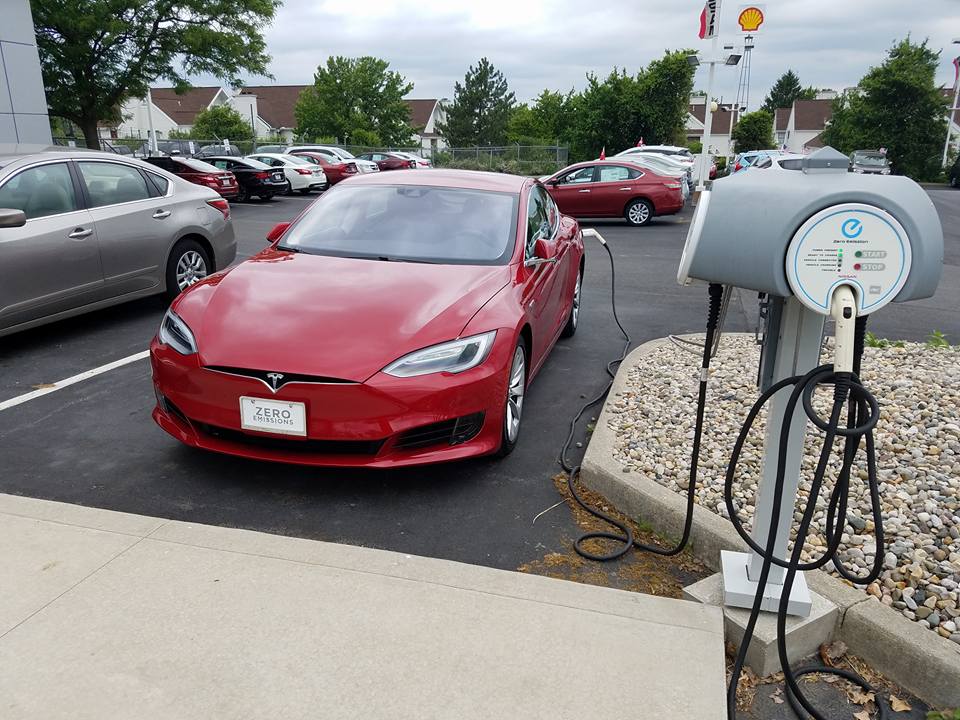