I get a lot of questions about it’s like to major in “Computation and Cognition,” known around MIT as Course 6-9. In this post, I’ll describe my experiences with Course 6-9 and give an overview of what the major is like overall.

Individually, “Course 6” refers to students who study Electrical Engineering and/or Computer Science (EECS) and “Course 9” refers to students studying Brain and Cognitive Sciences (BCS). Course 6-9 (Computation and Cognition) is a joint major between the two departments! It was announced in the spring of 2019 and remains MIT’s newest⁠01 and nicest, in my opinion major.

I went to a three-week neuroscience-focused summer camp when I was 15. It was there that I learned what an action potential was. I also dissected a sheep brain. After camp, I forgot about neuroscience for a while, until the summer after my junior year of high school. That summer, I found myself at a local university, working in a neuroscience lab through a high school research program. This time, there were no sheep brains to dissect. My entire project was done on my laptop.

I was working in a subfield of neuroscience research called computational neuroscience. Wikipedia provides a pretty good definition of what this is:

Over my summer in the lab, I learned two things: how to code and how to investigate questions about the brain using quantitative approaches. I found myself very interested in both neuroscience and computer science – I was fascinated by the brain, especially perception, and enthralled by the vast opportunities that computer science could unlock for me. I decided that, moving forward into college, I didn’t want to choose one discipline over the other. My parents and teachers were confused by this, but I knew from my summer research that I could rock the intersection.⁠02 These days, there are really careers for computational-anything!

As my summer in the lab ended, the college application season started. As I began writing my applications, I researched many different universities to see what kinds of programs and opportunities they had in neuroscience and computer science. I also looked at each university’s general approach to accommodating students who were undecided or diverse in their interests. Some universities admitted into individual schools within the university and then restricted what majors/minors students could declare, while other universities (like MIT) allowed admitted students to switch into any major or double major across any fields.

When it came time to choose a school, I felt like it was easy for me to pick MIT over the other schools I was considering. MIT had an unparalleled number of opportunities for scientists and engineers and the neuroscience department had fantastic computational neuroscience opportunities (both in the classroom and in the lab).

When I arrived to MIT, I thought I would pursue a double major in Course 6 and Course 9. I felt a bit uneasy about attempting a double major, however. Doing a double major means you have to satisfy many more requirements than if you do a single major. This is often justified – if you want to have mastery over two areas, you’ll need to complete requirements for both – but makes less sense in the context of wanting to study the intersection of two areas, for which getting the traditional education in two separate fields may not actually spur as much success as focusing on the intersection itself.

Doing a double major felt like a bad idea because it meant I would have less time to invest in pursuing a minor in one of my secondary interests (like math, physics, or public policy), taking electives, or being more involved on-campus outside of classes.

Luckily, within a few weeks after arriving to MIT, I started hearing rumors that a new joint major between Course 6 and Course 9 was in the works. I was fine with the rumors being just that – rumors – until the spring when the due date to declare my major crept closer.⁠03 You can change your major at any time after this date. It's just a way to get students matched with an advisor and start creating a plan to complete their degree requirements. I wanted to know if the major would be approved in time for me to declare Course 6-9.

So, in the spring of my freshman year, I went to visit Brain and Cognitive Sciences Professor Michale Fee to discuss the situation. He assured me that in just a few weeks, a new joint major called Course 6-9 would be officially voted on by administrative bodies and would likely be approved. I was incredibly excited. First of all, I would no longer have to do a double major to pursue both my interests – I could simply do the joint 6-9 program. Secondly, I hoped the new major would bring even more students interested in computational neuroscience to MIT and open up the field as a possibility to those who arrived at MIT undecided about their interests.

The major was approved a few days after my major declaration form was due, so I originally declared Course 6-7. When the major was approved, it made headlines in The Tech, our student newspaper. Not only was the undergraduate Bachelor of Science approved, but also a five-year Master of Engineering (“MEng”)! I was over the moon. Having the opportunity to get a bachelors degree and then potentially MEng, all at a school I was growing to love, in a subject I loved so much – it all felt like a dream come true. I had a great time printing out the change of major form and submitting it to the registrar to officially become a 6-9. I was definitely one of the first to officially be a Course 6-9!

Individually, the fields of EECS and BCS hold a wide range of topics. In EECS, a student focused on “signals and systems” and a student focused on “theoretical computer science” may find themselves taking very different classes and pursuing very different jobs. The same can be said of a student in BCS who focuses on “molecular neuroscience” as compared to one focused on “cognitive psychology.” There are a multitude of foci one can have within each department, and this only becomes more true when looking at the intersection and combination of EECS and BCS in Course 6-9.

Two main (informal) tracks emerge that encompass well the many areas one could focus on within Course 6-9. They are (1) Human and Machine Intelligence and (2) Neural Engineering. Some explain it as human and machine intelligence being a combination of 6-3 and 9 while neural engineering is more of a combination between 6-1 and 9.

To be clear, these tracks are not formal programs within 6-9. The tracks are just two popular foci within the major. Students can craft a specific focus for themselves by taking whatever classes they want, within the constraint of satisfying their degree requirements.

Classes and research labs focused on “human and machine intelligence” use a variety of methods to investigate different mechanisms of human intelligence and then translate them into biologically-inspired approaches to artificial intelligence, while those focused on “neural engineering” might be more interested in “reverse-engineering” circuits in the brain, often using more tools from the field of biological engineering.

These two tracks overlap and interface with each other. Discoveries in one area enabling those in the other. Many 6-9s, like me, have interests that span both tracks. For example, I might want to record and model a neural population using more of the techniques from the “Human and Machine Intelligence” domain, then later try to manipulate that same population using approaches from the “Neural Engineering” domain. Luckily, much of the coursework for each track is both cross-applicable and genuinely useful for scientific contributions to the other track.

I made this color-coded chart to help visualize the requirements for Course 6-9. The top row has the introductory subjects, the second row has the core requirements in EECS and BCS, and the bottom row has upper-level requirements. The most comprehensive, updated requirements will always be here: http://catalog.mit.edu/degree-charts/computation-cognition-6-9/

Well, let’s take a look at the chart above.

So, the answer to this question is that it is up to you. You can make 6-9 more EECS or more BCS focused by choosing the subjects you take accordingly.

Internships as a 6-9: Anything you want!

To preface this section, I must first state that your major is not the sole determinant of your opportunities. This can be hard to grasp if you haven’t witnessed or experienced it. It all comes down to two facts:

So, when people ask me the question of “what kind of jobs can I get with a major like that?” the answer is that I can really get any job. Many people end up working in fields not directly tied to their major after graduation, and that’s because college teaches you more than just textbooks of information. It teaches you how to identify important problems and what types of problems you love to solve. It gives you plenty of practice, semester after semester, of how to start as a novice and build up your expertise in a given topic. Your major is not the sole determinant of your opportunities.

But your major is a determinant. It’s easier to pursue a career if your major has prepared you for it. One thing I love about Course 6-9 is that I think there are a lot of different careers that one can prepare for by completing the major. You can work in roles focused on Course 6/EECS (such as software engineering) or focused on Course 9/BCS (such as clinical research) or those that sit firmly in the intersection (computational neuroscience research, brain-computer interfacing, artificial intelligence research, etc).

Example internships and opportunities I’ve had

This is a rundown of my past experiences, just to highlight the fact that 6-9s can really pursue opportunities that run the gamut of EECS, BCS, and more! From this list, you can perhaps get a look at how pursuing one avenue of opportunities doesn’t stop you from pursuing another field simultaneously. It also highlights how one job might help me find my next one, by bolstering my resume and giving me new references/connections.

Example internships and opportunities other 6-9s have had

There are perks and drawbacks to choosing 6-9 over some other majors. These are subjective, and vary person-to-person, but here are the ones I’ve identified:

My Advice for Future Course 6-9s

We all know why Course 6-9 is memey. In this section I’d like to expand on the ways 6-9 has been memed at MIT.

The faculty tried to circumvent the meming before the major came out. Back in December 2018, I remember filling out a survey that asked students interested in a potential joint 6-9 major if they’d rather it be called 9-6. I hit “no” – both because I think 6-9 is funnier and because the 6-9 ordering matches better its sister majors 6-7 and 6-14.

Anyway, we ended up with Course 6-9. The Tech (our student newspaper) wrote an excellent article about it in their semesterly joke edition. Take a read: 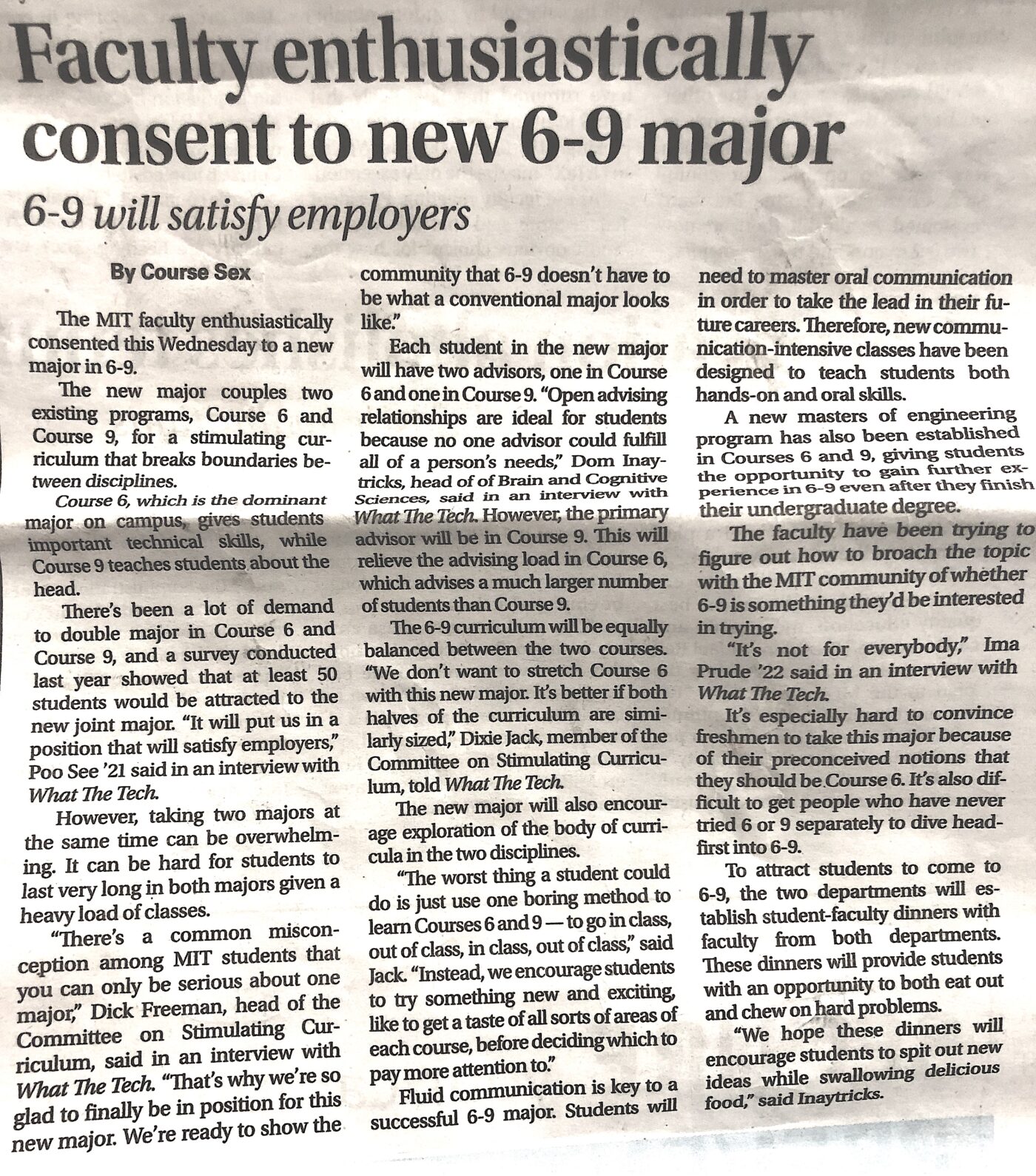