Some of you may wonder: how do people eat food without a meal plan? Well, dear mortals, I have perfected the art of photosynthesis and subsist entirely through sunlight. Unfortunately, with the encroaching winter, rapidly decaying window of daylight, and my delayed sleep schedule, I need to supplement my diet with human food. So I took a picture of all the food I ate for a week, because I thought that would be a cool blog post, and here it is.

This came out as an experiment to figure out how exactly I got my meals. I knew I was eating roughly lunch and dinner and other meals every day, but I didn’t know how much of what I was eating was free, how much I cooked, and how much I bought. I thought making this post would help.

As a disclaimer, this also isn’t representative of people who aren’t on meal plans. One of my friends cooks spectacular dishes for most of his lunches and dinners, for example. Come to think of it, almost all of my friends are on meal plans, so I don’t really know exactly how people without meal plans get their food.

Finally, you can shame me for having horrible eating habits. It’s cool. I’ll accept it. I hate my eating habits too.

I wake up late, as HMMT⁠01 the Harvard-MIT Math Tournament, a high school math competition happened the day before and I spent a long night around Harvard and hanging out with friends. Breakfast was not a concern.

Our hall has a free food table which had some leftover corn flakes, and I didn’t want cereal, so I made some breadsticks rolled around in crushed corn flakes. I eat that for lunch with some Nutella. I also eat two bananas. 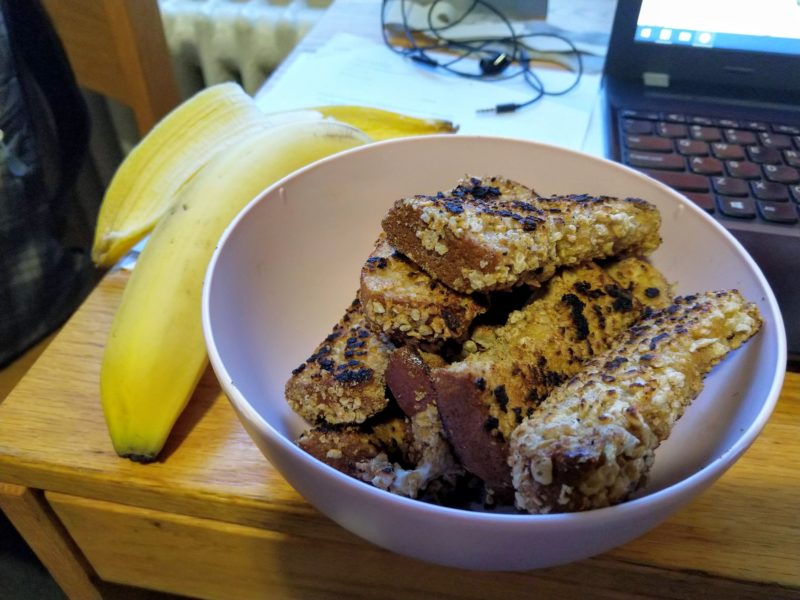 I do some work for the rest of the day; I didn’t have much to do. For dinner, I eat some apple crumble and pie that’s also left in our free food table.

I again wake up late enough that breakfast was not a concern. I eat some croissants from the Dunkin in the Stud⁠02 the woefully inadequate Student Center for lunch. 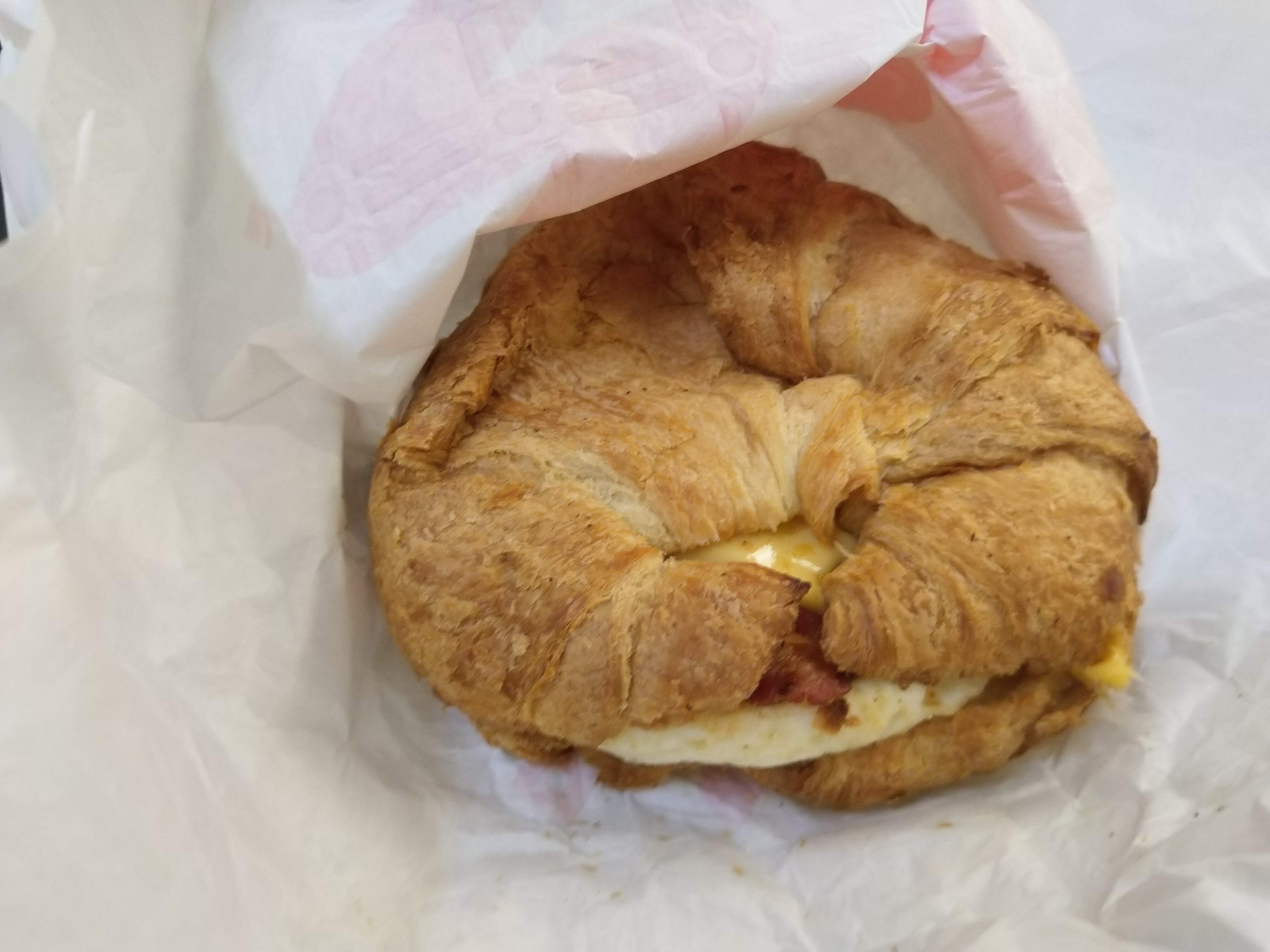 Outside the Stud, I watch the transit of Mercury. Or at least, attempt to watch—there were too many clouds to have a long enough viewing window to appreciate it. I spend the rest of the afternoon working in the Stud before heading to Kresge for an improv workshop with Roadkill Buffet, MIT’s improv comedy group.

For dinner, we had a DEAPS⁠03 Discover Earth and Planetary Sciences, the Freshman Pre-Orientation Program I went to. We basically learned about earth sciencey stuff for a week together. It was really fun, strongly recommend. reunion at Naco Taco, a Mexican place up along Mass Ave.

I think I had the Al Pastor taco, and another taco that I don’t remember the name of, but it probably had beef and cheese. We also had lots of chips.

I also have tea, and wonder whether or not to take a picture of it.

I sleep through breakfast. The Office of the First Year hosts around two or three lunches with professors every week, and I usually sign up for one each week. This week I had lunch with Professor Steil from the Department of Urban Studies and Planning. His history’s pretty cool, since he went from African-American Studies as an undergrad to a PhD in Urban Planning. We had some conversations about the first-year experience and Course 11⁠04 Urban Law and Planning. .

The lunch itself is Cafe Luna catering. It’s nothing spectacular, but at this point, I’ve been conditioned to like it. It always comes in these white boxes, with a sandwich, some chips, and a pastry, usually a cookie. I grab a steak and cheese sandwich.

After that, I print some documents and study for a bit before taking the second midterm for 8.022⁠05 Physics 2. . I didn’t feel that confident leaving the midterm. I don’t remember what I did next, but I probably did homework or something before heading to Pritchett.

EZHealth organized a cooking class at Pritchett. We were taught to make Kale and Quinoa Salad and Chicken and Mexican Rice Bowl. The recipes were pretty simple to follow, so it quickly turned to a Q&A session about cooking. We sampled the dishes too.

Then I head to Tech Squares,⁠06 MIT’s square dancing club! where there are some snacks to munch on in between the dancing. Most of it was gone by the time I remember to take a picture. There were some really good blueberry scones.

Back at my hall, we have a small event where we drank tea and munched on pretzels.

I stay up a bit late and get hungry, so I eat some Wheat Thins.

I belatedly realize that I didn’t really eat dinner that night. Oops.

For breakfast, I have a protein bar. I had a lot of these in stock from when I did a Costco run a couple weeks back. I eat it during lecture for one of my classes.

After lecture, one of my friends invites me to eat with him in the Maseeh dining hall, saying he had lots of meal swipes he needed to use. So we eat. I forget to take a picture until my plate is nearly empty, but I had some broccoli, and probably some rice, and maybe some sort of meat. I don’t really remember. I do remember I had milk. 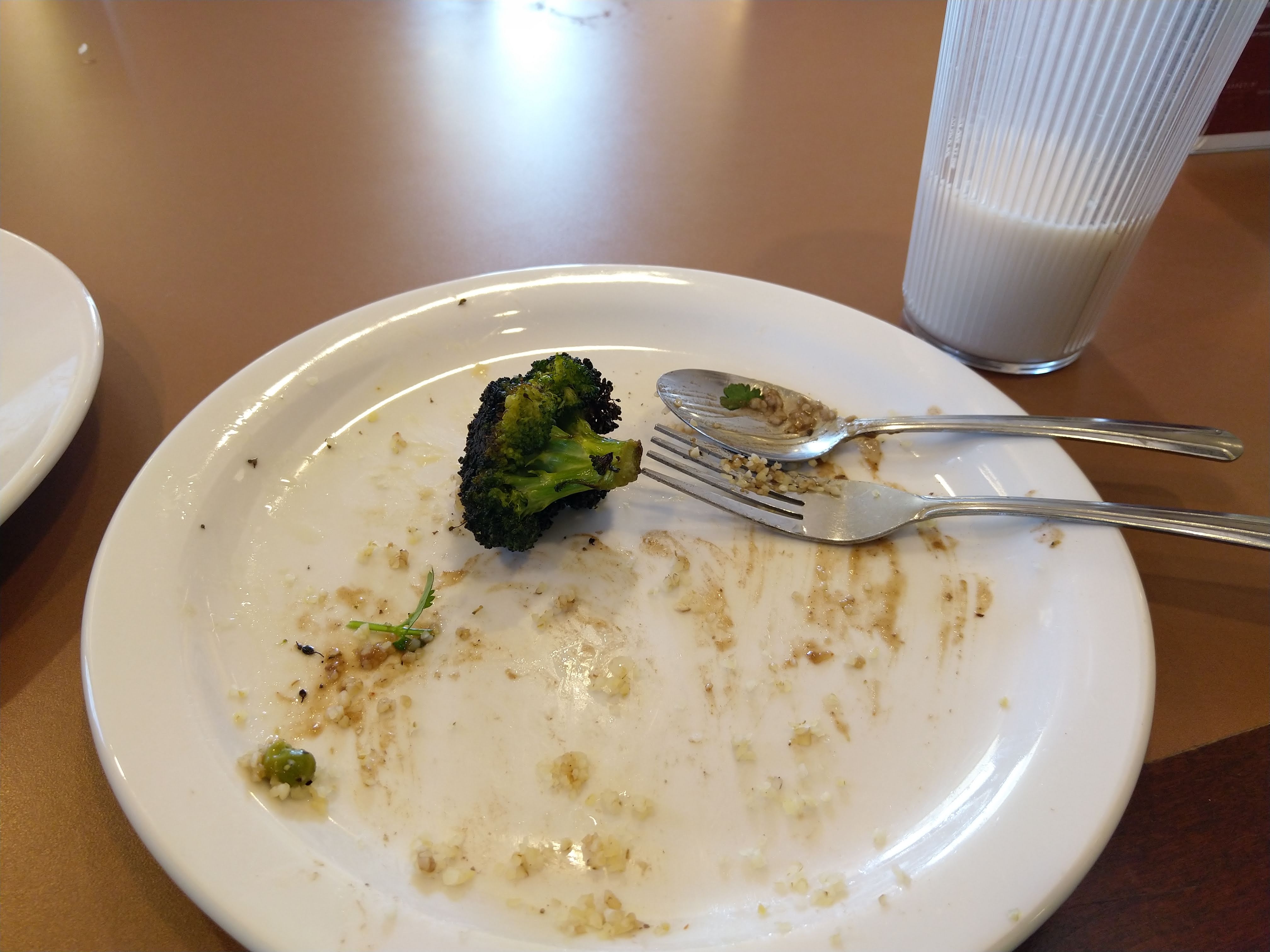 After recitation and another lecture, I head to the International Students Office. The ISO has an afternoon break every second Wednesday, and there’s food and some activities. This month’s afternoon break was themed around Thanksgiving, and we played charades with words related to fall. I have some salad, mashed potatoes, and pumpkin pie.

I head to the Stud to do some homework again. For dinner, ESP⁠07 the Educational Studies Program, best known for running Splash. had a worksession, where we did some work to prepare for Splash. Splash is an event where over two thousand high school students come to MIT’s campus to take classes, mostly taught by MIT students, about literally anything—from astronomy to ancient art to abstract algebra. Most of what I did in the worksession was helping revise a bunch of emails. There’s also food that I couldn’t identify (probably Mediterranean?), but I remember it being good.

After the worksession, I head back to hall and hang out. Around midnight, I eat some fries that my friend had leftover from the takeout box they took from the Maseeh dining hall.

I again do not have enough time to cook breakfast before my recitation, so I eat another protein bar.

For lunch, I don’t have too much time to cook, so I instead make a power smoothie before heading to lecture. It is essentially fruit, protein powder, milk, and vegetables. I down it with some bread. It is probably the healthiest single thing I’ve consumed all week, if you’re only counting raw nutrients.⁠08 which is probably not the best way to determine whether something is healthy 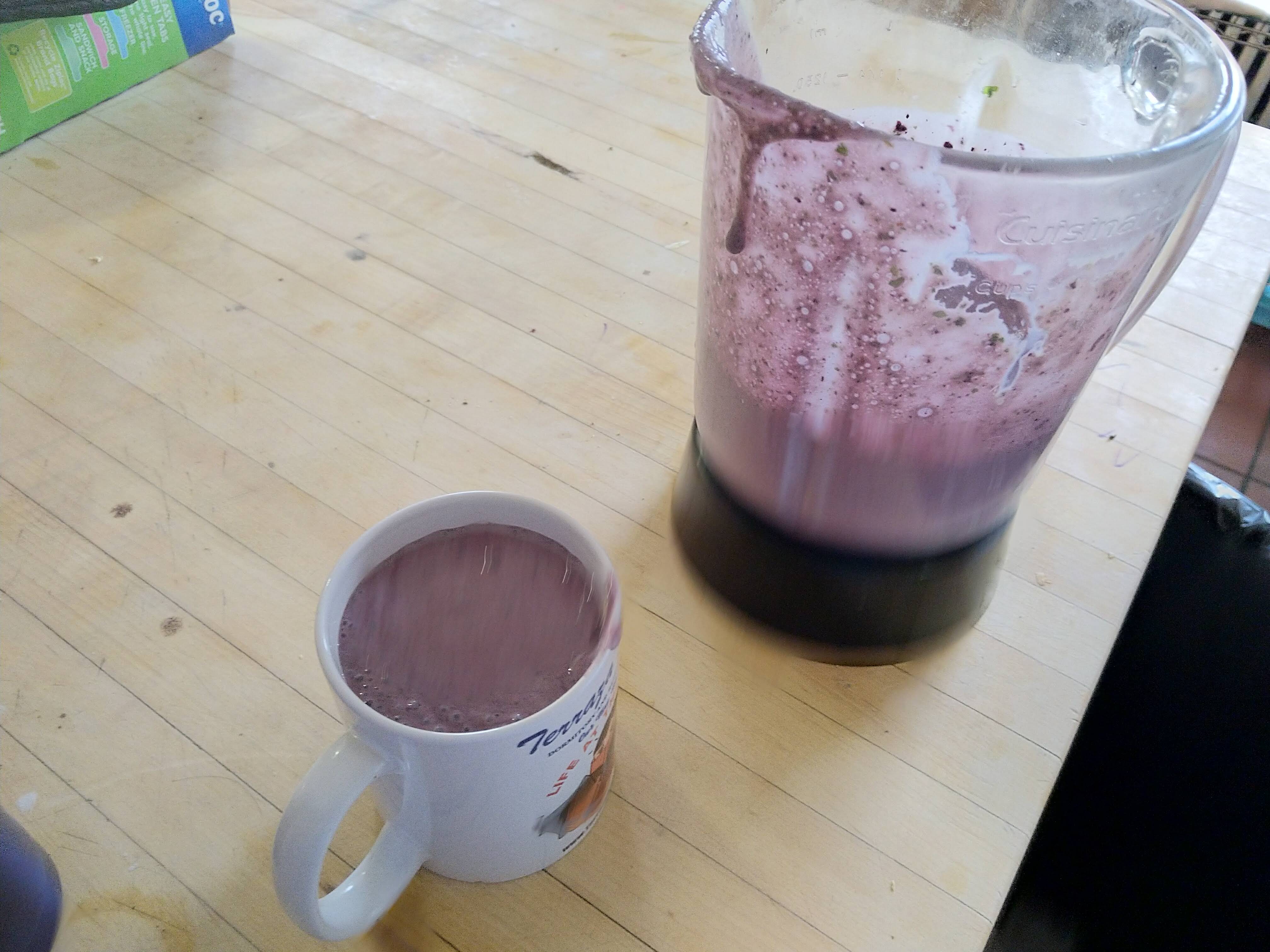 For dinner, I make myself some scrambled eggs and toast. I probably tossed in some other things in the eggs too, but I don’t remember what, nor can I tell from the picture. Also not pictured is the toast.

I then head to first aid training for ESP, where we learned things like how to provide first aid to wounds. Then I headed to a vacant classroom in Building 56 to practice teaching one of my Splash classes called Relating Games. Around midnight, I get hungry and eat a little Chex Mix I had bought from the Stud.

I ended up eating a quarter of the bag.

I skip breakfast. To be honest, my sleep schedule has shifted enough that lunch is pretty much my first meal of the day. After lecture, I head to the International Students Office again, because there was a talk on impostor syndrome with some pizza.

I could only finish one of the slices, and I packed the other one in a container I bring around with me to scavenge for food. Immediately after that I head back to my room to pack my things before heading to the train station at Kendall. For the weekend, a bunch of HMMT members were going to Princeton to volunteer for PUMAC⁠09 a math competition that Princeton undergrads run , and we left that afternoon.

After a tortuous and torturous seven-hour bus ride to New York, we briefly eat dinner at a Chick-fil-A. I have mixed feelings about eating dinner from a franchise whose values I vehemently disagree with.

We take a train to Princeton Junction and then the dinky to Princeton. I fall asleep on a couch.

Busy day, as it was PUMAC. I woke up at around 8 AM and ate a bagel that they provided as breakfast for the volunteers. I did not remember to take pictures of the bagel because I was preoccupied with figuring out how to proctor.

I proctored a team while doing a pset. Watching them solve math problems reminded me of when I used to do math competitions, two years ago.⁠10 i feel so old PUMAC got Subway to cater for everyone’s lunch. Apparently Subway does catering, and it came in boxes with a sandwich, chips, and a cookie. If that sounds familiar, well, it should. 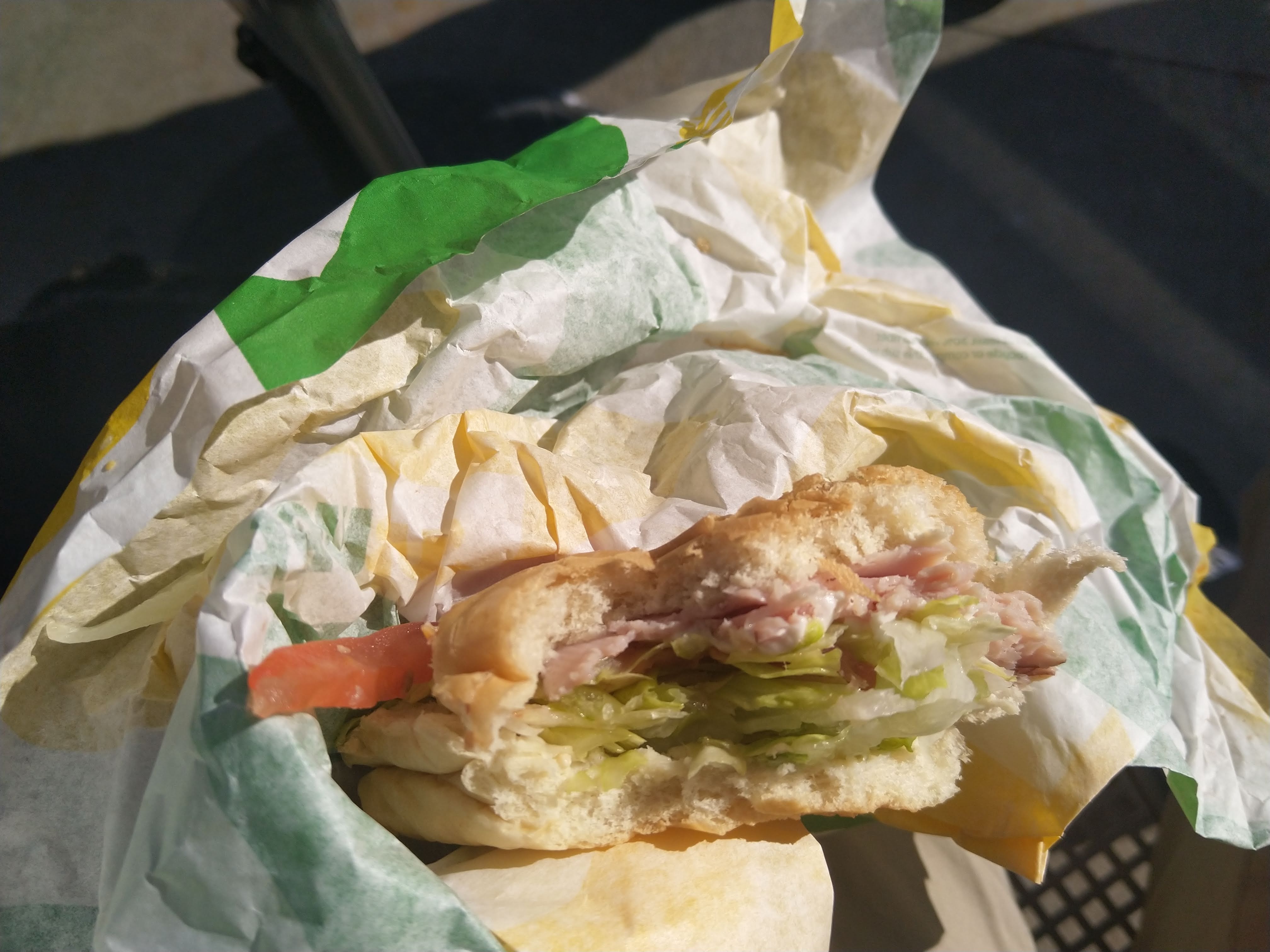 Because of the unsatisfying lunch, several of my friends and I went to a Panera Bread⁠11 there are no Panera Breads in Cambridge. Oof. to have some more food. I was already rather full, so I order a small mac and cheese.

After that, I headed back to the classrooms to help grade PUMAC’s Live Round. After some intermissions and awarding ceremonies, a couple of volunteers from HMMT head to eat dinner at PJ’s Pancake House. I get pancakes, eggs over easy, some bacon and a sausage. 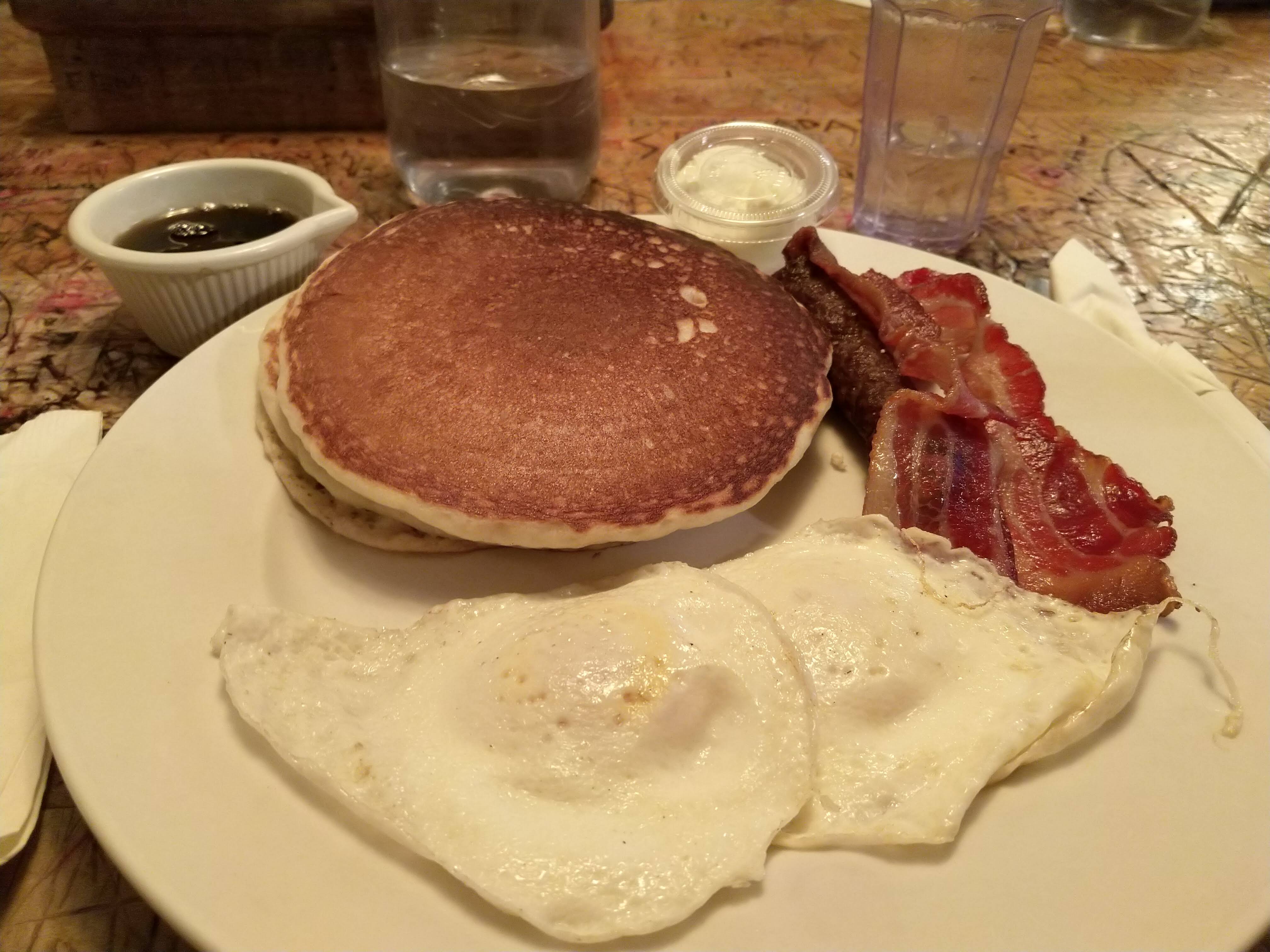 And after another long night of hanging out with friends, I collapse in a wrinkled heap in a sleeping bag on my host’s bedroom floor, anticipating the torturous commute back to Boston the next day.