It was a hot, humid Friday afternoon when I touched down in Logan after a 20-hour flight, badly jetlagged and starving (plane food is not the best). Things have been looking up since then, and being meticulously organised (both my dorm room and my room back home would probably crumble in laughter if they could read this), I have tried to condense everything note-worthy into four major points:

I had never left Kenya before coming to the States. I went to both primary school (elementary/middle school) and high school in Nairobi and was within a half hour’s reach of my parents at any given time. Now I had to fly to the other side of the world in pursuit of education. This was the most drastic decision I’ve made, ever. Saying goodbye to my cat and having to explain to her that she would still be well fed and protected in my absence was hard, but the true impact of leaving hit while I was saying goodbye to my family at the airport. As expected, there was a show of waterworks, and a series of repetitive goodbyes, but eventually I managed to break away and get on the plane. If there’s anything I learnt from all this, it’s that goodbyes are hard- period. 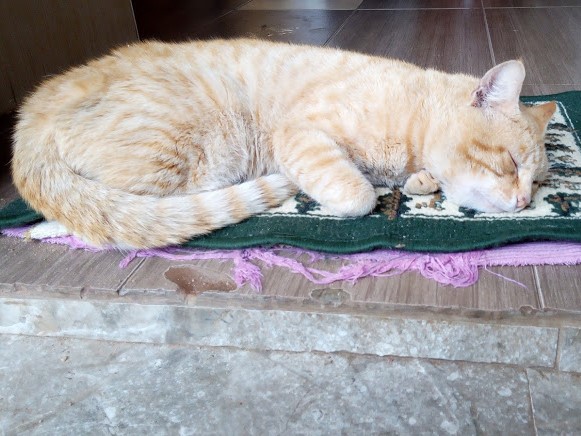 2. The subway is awesome, boba tea on the other hand…

Since I came to the States, I’ve been on the subway twice during my Freshman Pre- Orientation Program (Discover Ocean Engineering). I come from a place where public transportation is rather slow and unreliable so the subway is a wonderful concept to experience. Also, walking back from dinner at Harvard Square (still during said FPOP) and feeling the vibration of the trains beneath my feet brought about a wonderful childish form of excitement that I hadn’t had in a long time. However, boba tea (or any other form of cold tea for that matter) is an absolute no for me, perhaps because I’m accustomed to my usual cup of steaming hot Kenyan tea. My academic advisor had his assistants take us out for (free) bobas, and sadly I couldn’t make it through more than two sips of mine.

3. My FPOP was AMAZING

Ocean Engineering sounds like an awfully random FPOP to choose, and my thought process while choosing it also wasn’t really brainy (it’s summer, I want to be outside doing fun stuff, I love the beach, I hope we play beach volleyball at some point). The beach volleyball part didn’t happen, but what did happen was:

> I got to visit the New England Aquarium. I totally recommend doing this whenever you are within reach of Boston. I find sea creatures fascinating and the way they present them at the aquarium doesn’t just give you the biological aspect of it (i.e. scientific names) but also their role in the ecosystem. The wholesome approach while describing various life-forms in the ocean rightly gives the aspect of an entirely new world underwater. If not for the vast wealth of knowledge offered at the aquarium, then visit for the aesthetics- the dimly lit interior, completely devoid of natural light gives a unique ambience to the whole experience and draws your complete focus to the exotic creatures on display.

>*THREE* Boat Cruises in one week!

One of the (many) perks of being an international student is that during this year’s orientation, we went on an amazing boat cruise down the Charles River. Also, part of my FPOP was a Duck Tour which is basically a tour of Boston on a bus which later turns into a boat and cruises down the Charles, then turns back into a bus (I promise I’m not making this up). We had an extremely witty tour guide on the Duck Tour which made it all the more fun! We passed the John Harvard Statue at some point in our tour, this being the origin of Harvard’s name, and our guide proceeded to explain why the statue is commonly referred to as the “Statue of Three Lies” (my apologies to the Harvardites):

On the second-last day of my FPOP, we sailed to Spectacle Island and had an absolutely idyllic day where we explored the island, played a (frustrating) game of Mao (a type of cards game which has no rules but rather the players come up with secret rules as the game continues and you have to figure them out) and generally just bonded among ourselves. 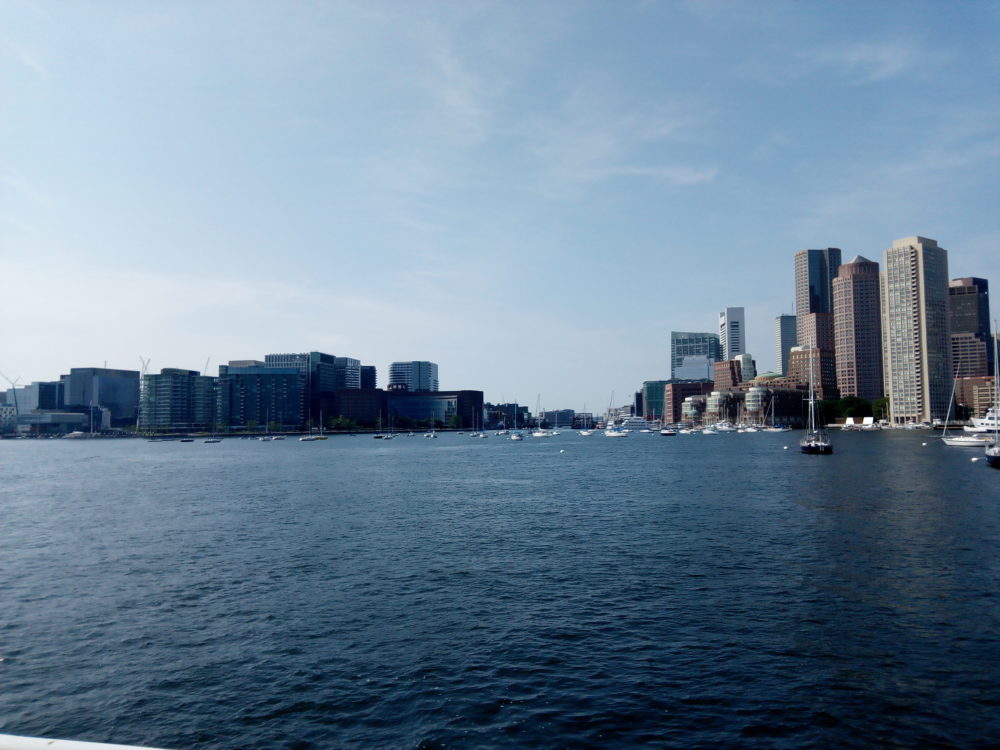 Views from the boat 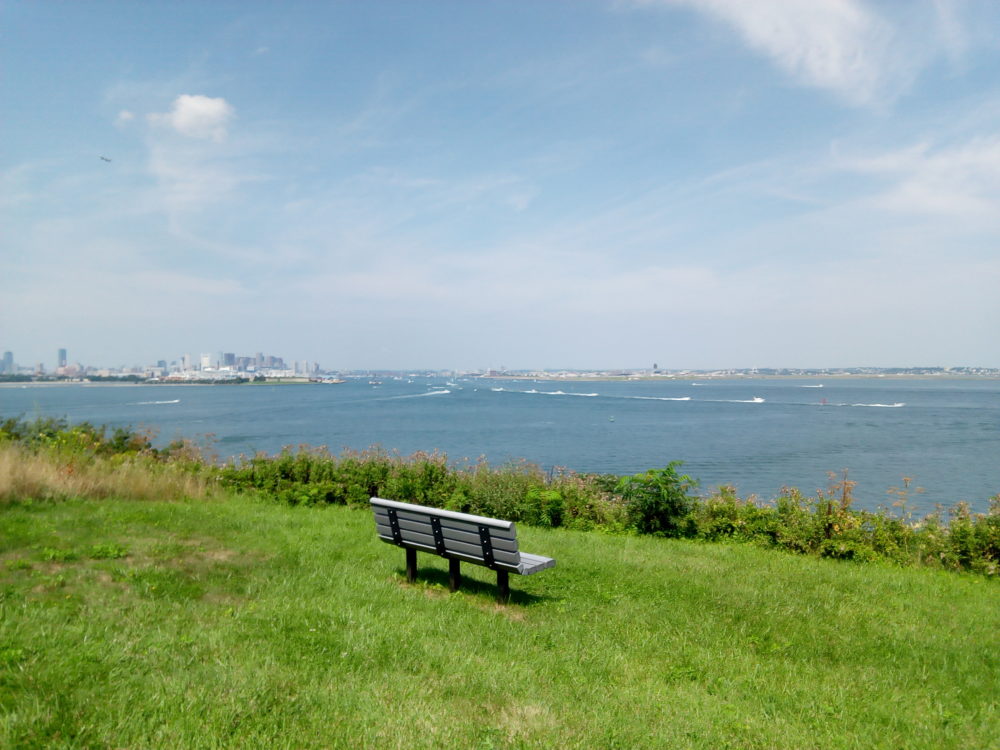 >We built a sea perch!

On the first day of my FPOP, we were placed into groups of three, given a manual on how to build sea perches –which are basically underwater robots- then left to our own devices (literally). It sounds a lot harder than it actually is, and we managed to make a functional one in two days! Cheers to this brilliant team! 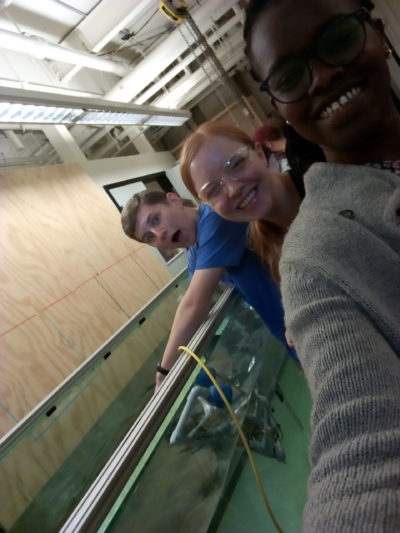 The exact moment when we tested our sea perch and it worked. We baptised her The Titanic.

There was a ton of food involved in this FPOP and we got to eat at Legal Sea Foods, The Cheesecake Factory and Faneuil Hall Marketplace. Sometimes we even got to individually  choose where we wanted to eat. On one of these expeditions, I got my first taste of pad thai, and afterwards we got ice creams from J.P. Licks. Just saying, FPOPs take nutrition very seriously.

An FPOP provides a great environment to meet fellow freshmen and make some of your first friends. It’s also a good forum to interact with upperclassmen and get to learn how to MIT. The mentors in my FPOP basically helped me figure out which classes to take in my fall semester and how to get around issues I was having with scheduling my classes, hence making life a lot easier for my academic advisor.

During international students’ orientation, we had a talk from a professor who drew us a graph of happiness over time for an MIT freshman: 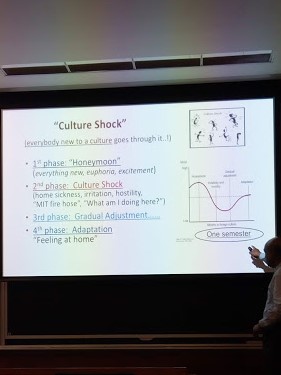 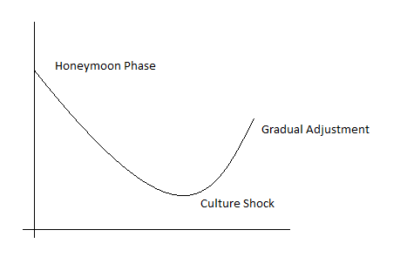 At this point, it’s safe to say that I’m at the honeymoon phase. I’m still planning my classes, so the firehosing that MIT is well known for hasn’t started yet. I have had several challenges settling in, the major one being learning how to pronounce things the American way so as to get people to understand what I’m saying (burger is said as brr-ger???!!!!) Also, not having any idea of what is being talked about in so many conversations has made me more of a listener than a talker nowadays, and having to ask “What’s a cannoli?” in a fast-paced conversation is a lot harder than it seems. Accents are a real thing, and it’s a humbling experience to find that people are willing to stretch their patience and take time to understand you rather than give up and leave you to find your way alone. I expect a lot of the international students are going through varied manifestations of culture shock in one way or another, but the friendliness and warm helpfulness that is prevalent in the MIT community makes this transition so much easier. All in all, it’s only been about 3.14 seconds since I got here, but MIT is starting to feel like home already.