Next House: Where The Sidewalk Ends by Melis A. '08

A tour of Next House!

I should be filling out an absurdly long form so that I can get a pre-med advisor, but instead I’ll write my entry about Next House! I’ve lived for two years in Next House. I like the description on the Next website, so I’ll put it here:

” We are one of the largest and friendliest dorms on campus, with almost four hundred easy-going people who like to hang out, have fun, and enjoy their time at MIT.

Situated on the banks of the Charles River, Next House offers stunning views of the riverfront, downtown Boston, Fenway Park, and the infamous CITGO sign from many of the rooms and lounges.
Next House was designed by world-famous architect Jose Louis Sert, and was completed in 1982. The house’s architectural themes are sun and community, conveyed by the dorm’s colorful living spaces, solar rooms with floor-to-ceiling windows, a bright dining hall, and a beautiful courtyard over which many of the rooms look.

Next House offers a balance of private and community spaces in its eight wings, each of which has its own atmosphere and culture.”

In fact the website is awesome, so I’ll avoid just repeating everything that’s written there.

Right off the bat, I’ll get it out of the way that Next House is far from the center of campus. If you’re looking for convenience, then Next isn’t for you!

I chose to live in Next my freshman year because I wanted to be in the Residence Based Advising (RBA) program. As part of the program, all freshmen get assigned to not only a regular advisor but a resident advisor, who’s an upperclassman that lives in the same dorm. It’s a great opportunity to get advice from an adult and a wise upperclassman. Also, the seminars are made of up of 8 other freshman who live in your dorm, and you meet with them and your advisors every week. I had the sweetest seminar EVER. It was called “Tech Goes to Movieland,” and we met every Sunday night. We would eat a free, amazing dinner from a local restaurant and then watch and discuss a movie (i.e. Dr. Strangelove, Big Fish, Mean Girls, Clockwork Orange, Saving Private Ryan, Best in Show.) Anyway, this year my roommate became a Resident Associate Advisor (one of the upperclassman advisors) for the same seminar =)

Ok, and now for the tour! In this entry, I’ll highlight the facilities, and then I’ll do another one on rooms. Next House is wonderfully bright, open, and CLEAN! So after walking ~8 minutes from the Student Center, or biking, or taking a shuttle, you see the front desk: 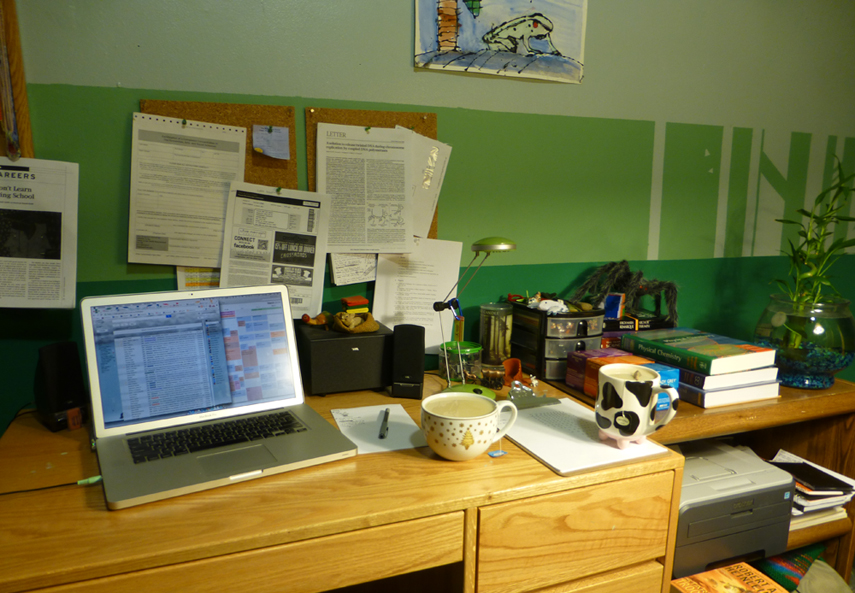 On the right is an Athena cluster, with a printer named “Tree-eater” (very aptly named):

On the left is a weight room:

If you walk straight, you see the Tastefully Furnished Lounge (TFL) (yes, that’s the actual name):

And on the left is the Courtyard. This is where we have BBQs and people play volleyball, frisbee, etc. I took this picture in the morning, and it’s been raining, so it looks gross =(

Walk a little further and there’s a big opening to the basement, which has a recreational area with pool, foosball, etc. (more on the basement later):

So there’s a little ramp that you walk up, and on the right is the cardio room (I couldn’t fit all of the machines in the picture, but there’s a treadmill, ellipticals, erging machines, stair climbers, etc) and a TV with cable:

And on the left is the Dining Hall. It was renovated a few years ago and it’s beautiful. The food is good, there are a couple different stations: Stir Fry, Grill (with hamburgers, grilled chicken, kabobs), Comforts (which is like homecooked food, i.e. pasta, mashed potatoes, chicken, roast beef), Tossed (they toss a salad made to your specifications or they can make you a wrap sandwich), Bits & Bytes (changes every week, ranges from a Taco Bar to a Cake bar), soup and dessert. Each area has daily specials, which are usually really good.

MIT doesn’t have meal plans like most schools. Instead, your id acts as a debit card, which we call “Tech Cash.” Dorms with dining halls have a program called “Preferred Dining,” where you pay $250 upfront per semester and then get 1/2 off all the food the dining hall. For an example of prices, a hamburger is $6.00 without Preferred Dining, but $3 with it. You can see our entire menu at this site.

Ok, off to the basement! Here’s another picture of the rec room:

Since there’s a dining hall, there are only two kitchens available in the whole dorm:

And here’s the laundry room:

OH! And we have the cheapest soda on campus:

Ok, that’s all for now, I’ll write more about the upper floors later!

13 responses to “Next House: Where The Sidewalk Ends”