where I've been, what I've been doing

People often ask me what admissions officers do in the summer. They seem surprised when I say “work.” I guess there’s an expectation that, because I work at a university, and because there aren’t any admissions applications to read in the summer, we must not have much to do. It’s probably true that the workload is somewhat lower than it is during the cycle, but summer is a key time for us to travel, work on dormant projects, and take vigorous vacations. In fact, I’m nominally on vacation right this minute, but figured I’d blog because I’ve been quiet for awhile and there are some things worth updating y’all about.

So: a brief accounting/recounting of life since my ISEF Trip Report on May 13th.

After a few days back in Boston, I flew to San Francisco to present about maker portfolios at the Bay Area Maker Faire. Along the way I got to meet up with Ari and Conrad, two MIT-students-turned-Thiel-fellows whose company Workflow was recently named the most innovative app of the year. It’s basically an automation engine (think IFTTT, but for your phone) and there is a good guide to making the most of it here. I also met Ashu, one of the cofounders of MakeSchool (his partner, Jeremy, is also on extended leave from MIT to help start the school), which aims to be an alternative to the traditional university experience for people who are interested primarily in software product development.

As you can infer, there are lots of MIT alumni in the Bay Area, including Danny, Jess, and Rachel, who I got BBQ with one night in Pacific Heights. 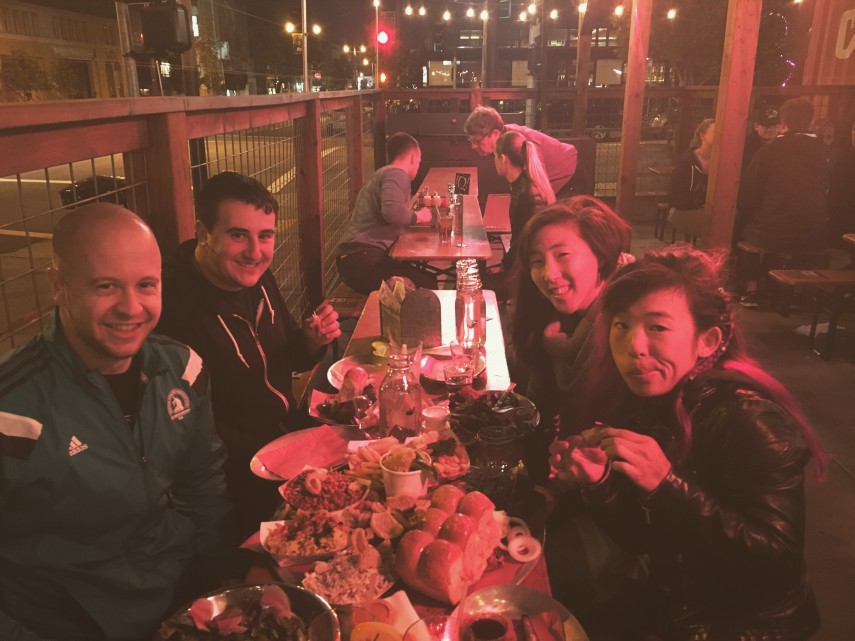 On May 23rd, I flew almost-direct (back-to-back redeyes) from San Francisco to Holland via Iceland to attend the 15th Online Dispute Resolution conference hosted at The Hague. I’m a fellow at the National Center for Technology and Dispute Resolution (Ethan Katsh, my undergraduate thesis advisor, founded the center and pioneered the field), so it’s a bit of a home conference type deal. I don’t typically present there, but I usually liveblog whatever panels and sessions as I can to help publish those conversations to a broader audience.

Holland is beautiful! I rented an AirBnB in the Hague (and in Amsterdam a few days later). Unfortunately, I got brutal food poisoning or stomach bug that manifest on the flight over, so had to spend a few days holed up in that AirBnB and didn’t get out quite as much as I should have liked. I’ll have to return at some point to get a proper Dutch experience. 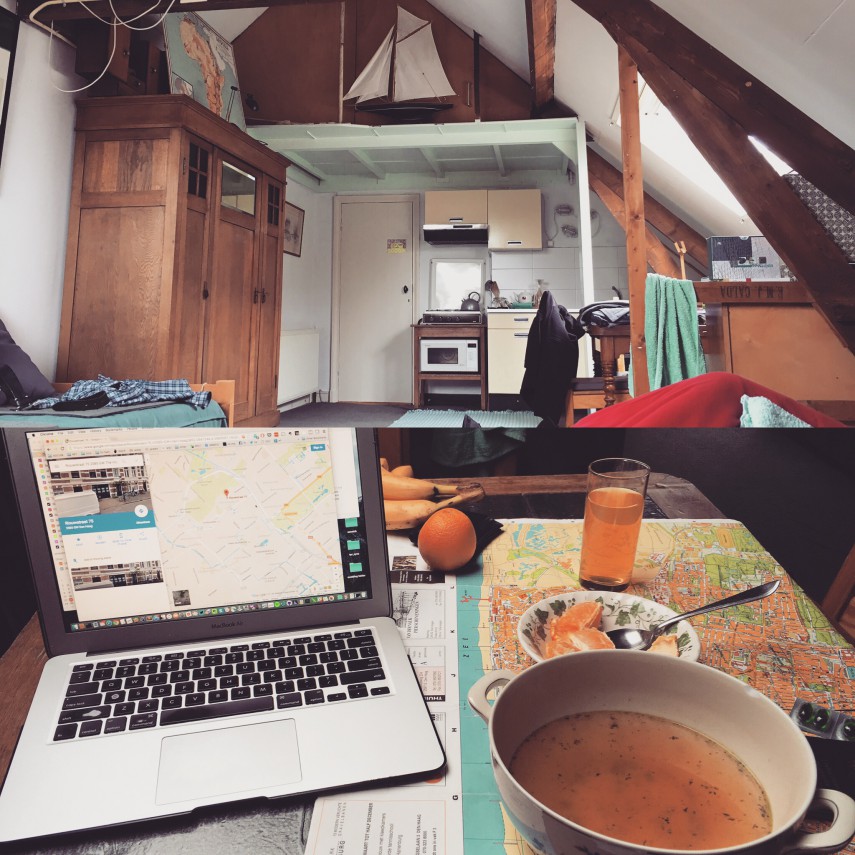 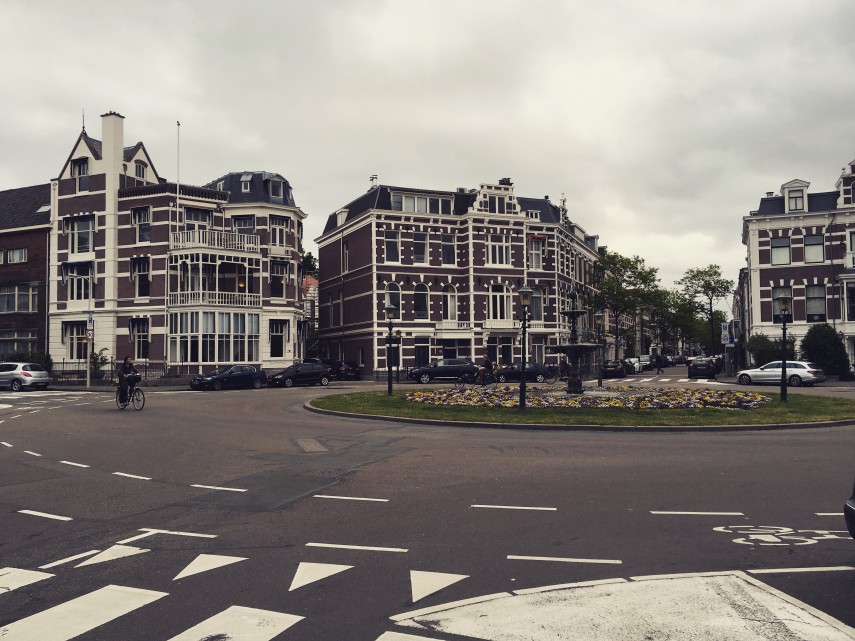 An orderly roundabout in the Hague 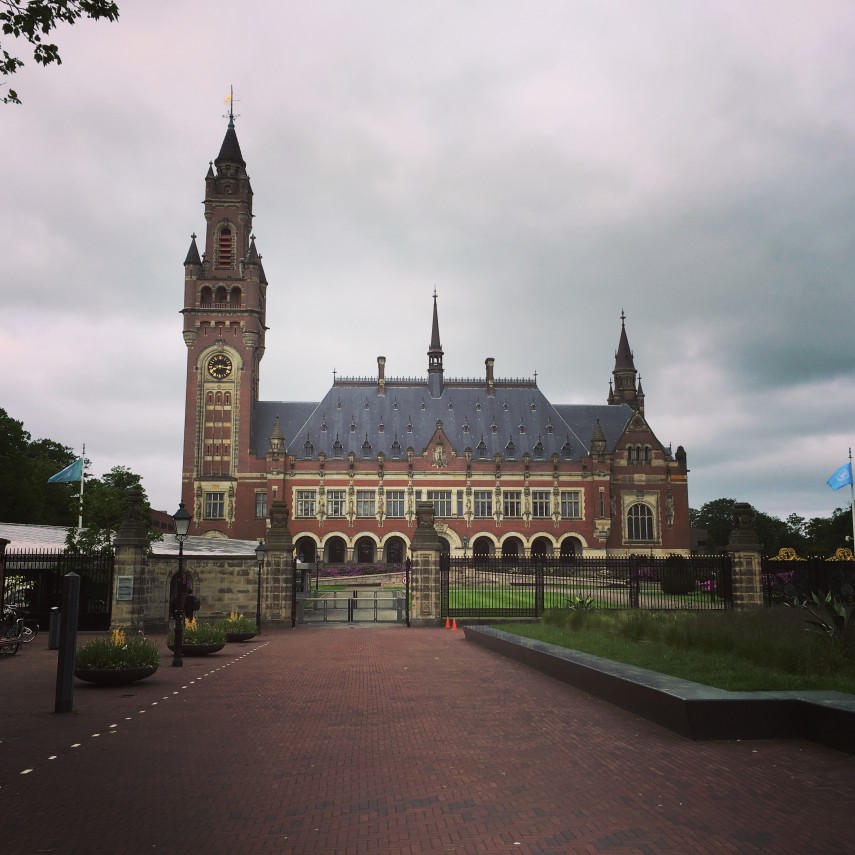 The Peace Palace in the Hague 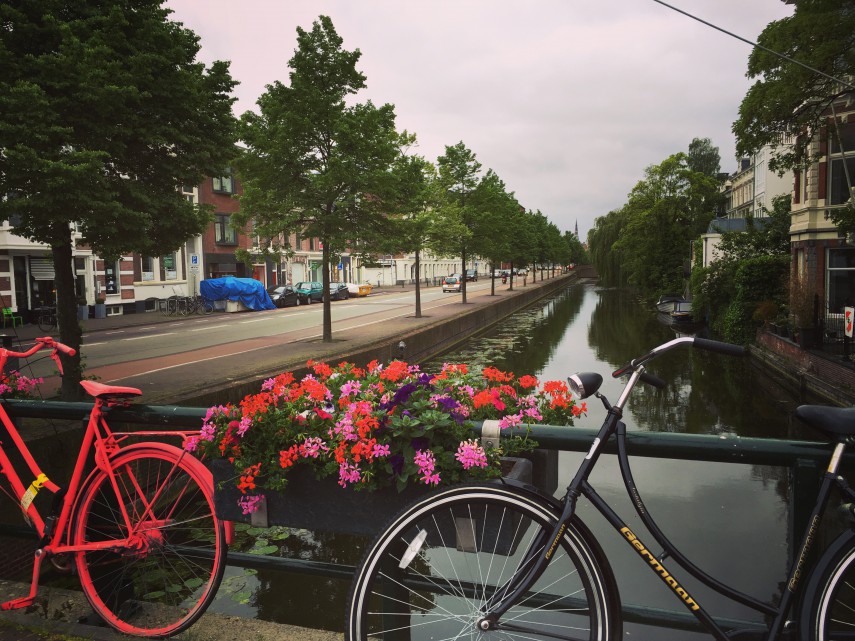 Canals and bikes, bless my soul

Commencement week at MIT! The Class of 2016 — including Anastassia, Ceri, Natasha, Michael, and Rachel — graduated on Friday June 3rd. Matt Damon, who grew up in Cambridge and once famously played a (fictional) MIT janitor, delivered the commencement address. Afterward, MIT hosted a massive reunion party featuring live music, fireworks, and a scale model of MIT and the Charles River made entirely of something like 150,000 cupcakes. 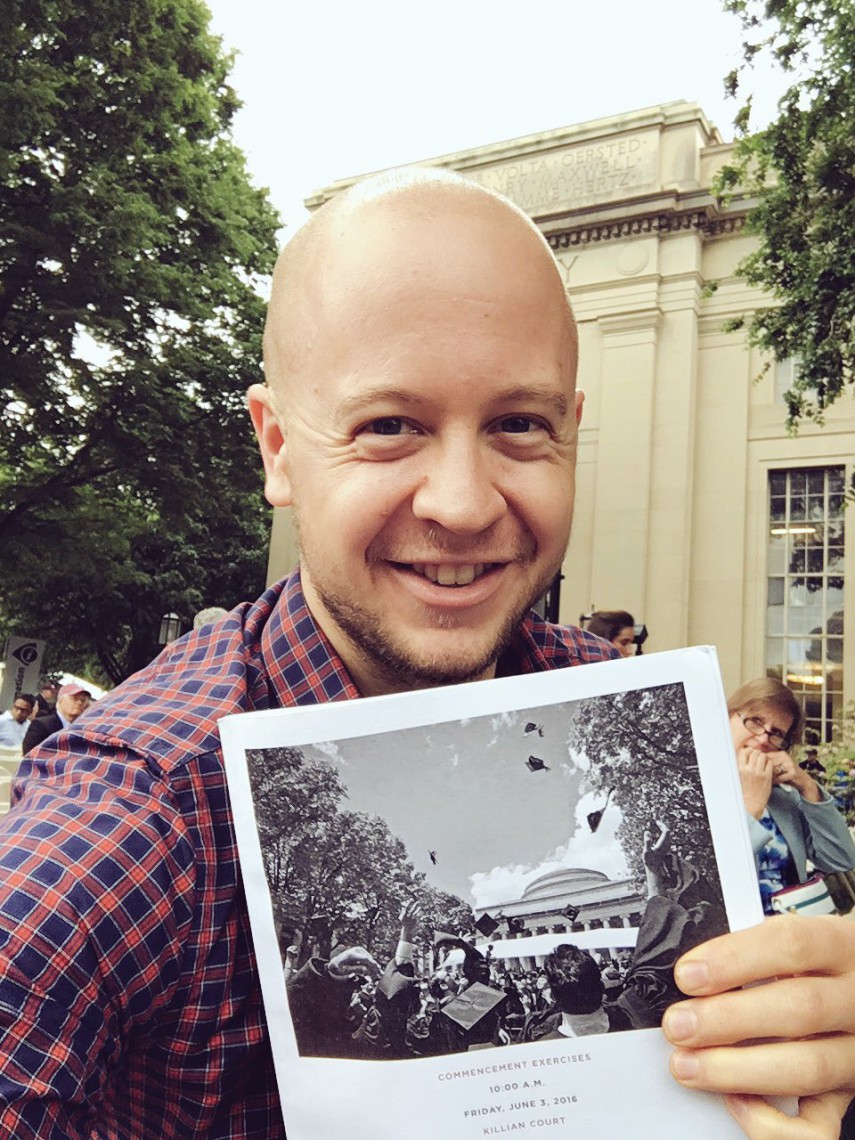 Waiting for graduation to begin 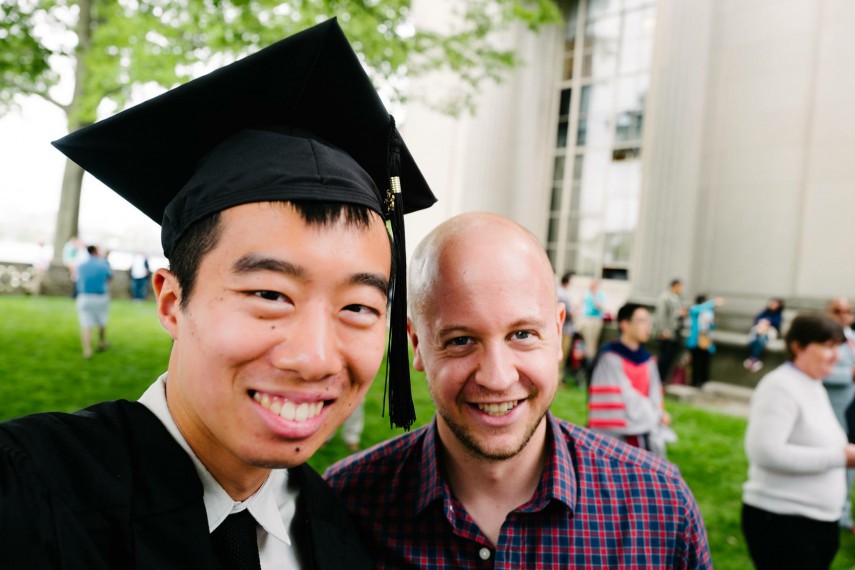 Michael & me (PC to Michael, can’t you tell by how nice the camera is?) 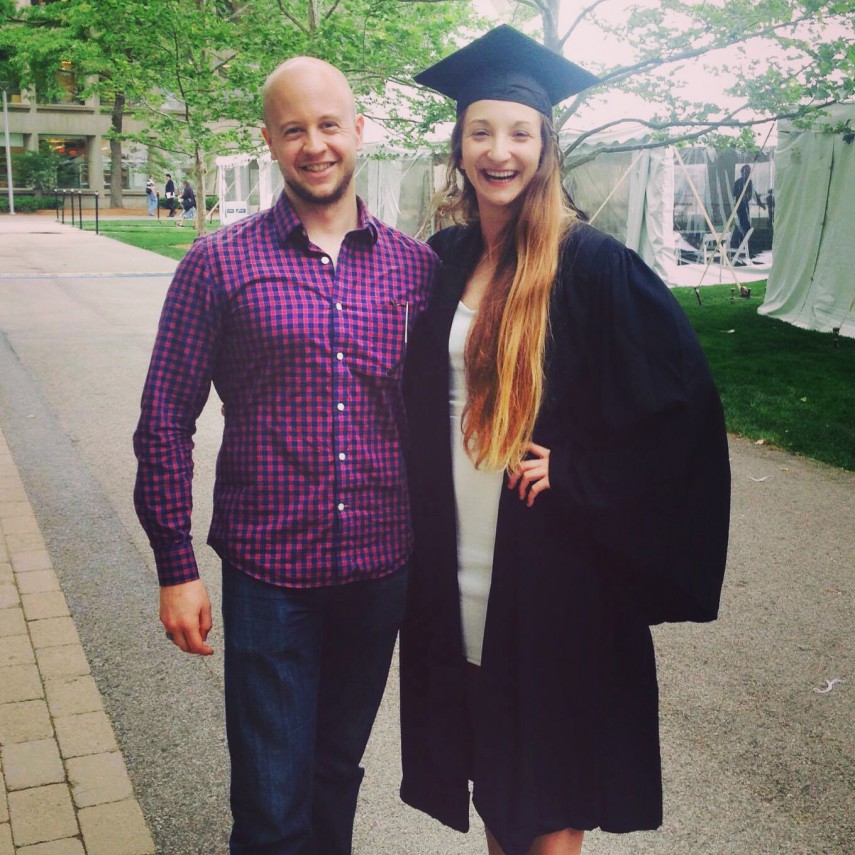 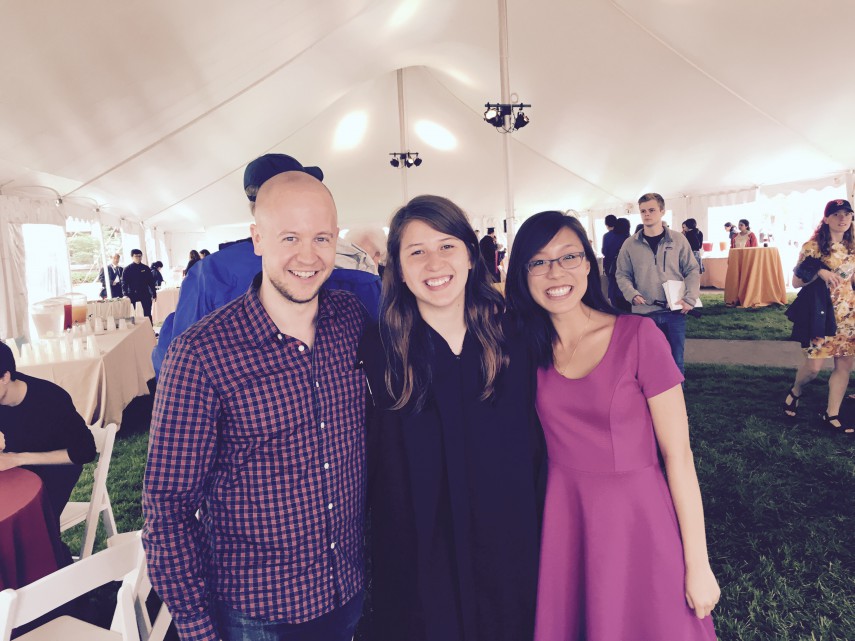 Me, Ceri, and Elizabeth 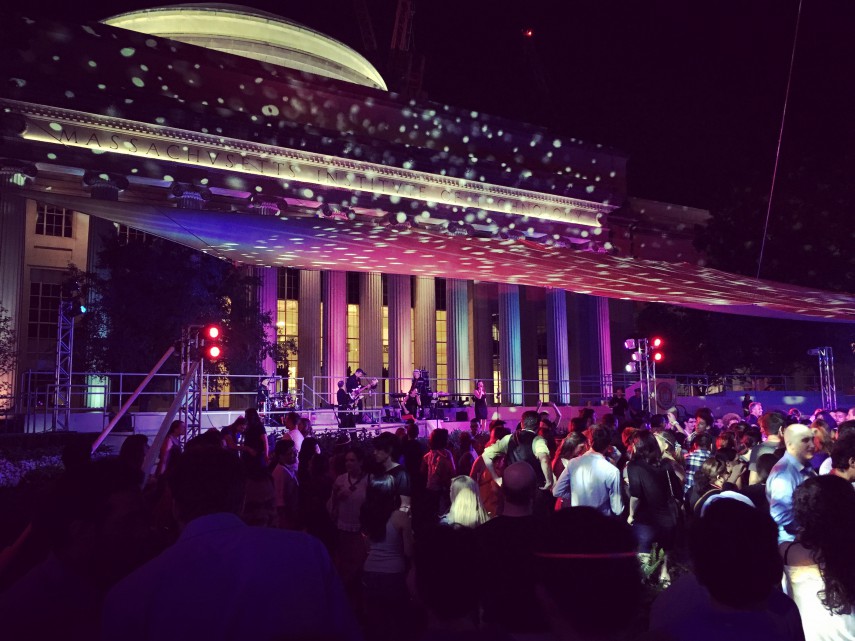 The Great Dome transformed for Toast to Tech

This week was pretty quiet, thankfully. I mostly worked on a backlog of communications projects, got coffee with friends and colleagues, and gave a couple info sessions. This is/was the only full week I had in the office for two months (after the first week of May until after the first week in July), so honestly it just felt good to fall back into the routine and catch up on stuff.

On Wednesday I got my copy of Civic Media: Technology, Design, Practice in the mail from MIT Press. This reader reviews key literature and concepts from the emerging field of civic media, which was pioneered by the Center for Civic Media at the Media Lab. I submitted a short case study drawn from my CMS/W master’s thesis on user-generated censorship. It’s only a few pages in a truly massive tome but always nice to see your name in print. 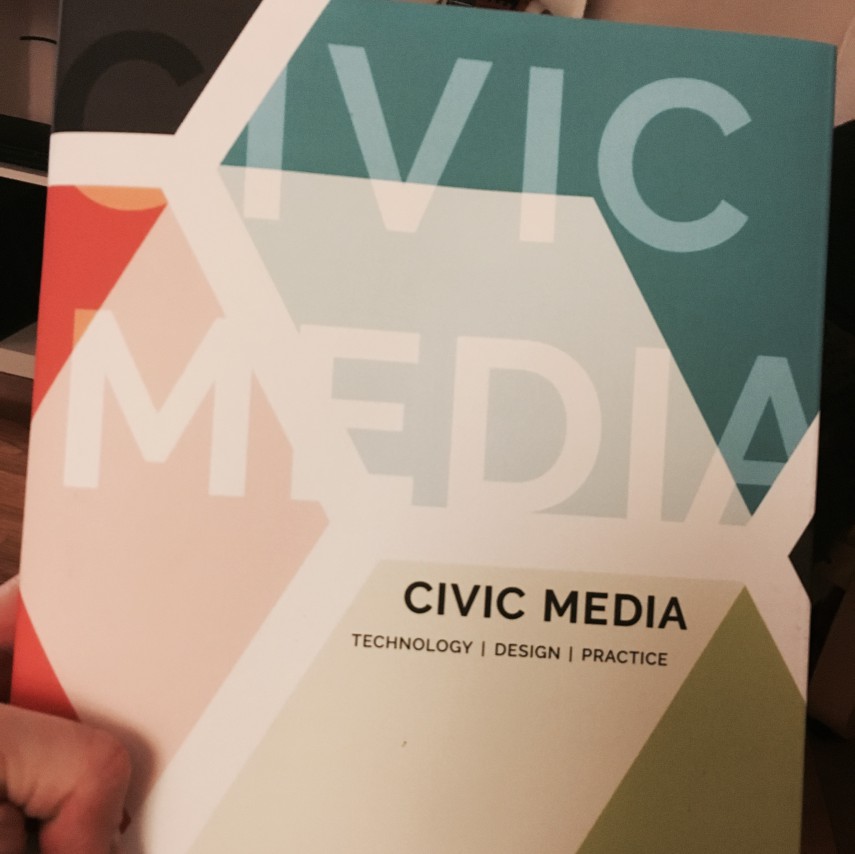 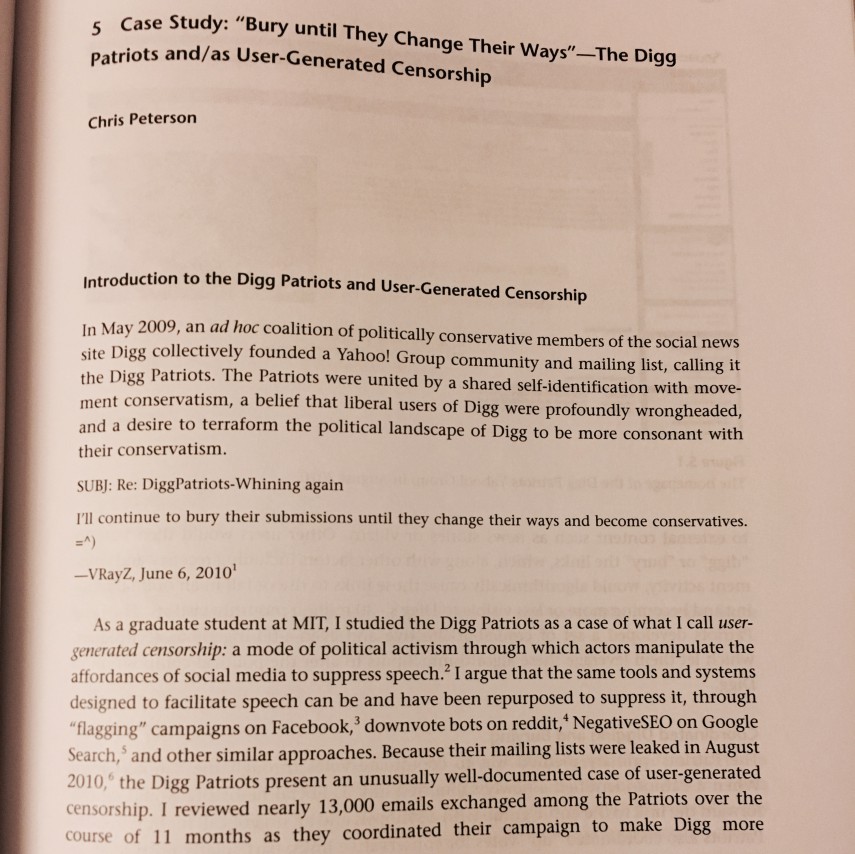 On Friday I flew to DC for a series of meetings as part of the National Week of Making (you can read more about MIT’s extensive involvement with the program). I spent the day at the White House Office of Science and Technology Policy, followed by an offsite meeting at the University of DC, meeting with leaders of the Maker Movement from all 50 states and some of the core team at OSTP that helps support science and technology educational initiatives. On Saturday, I gave a talk about maker portfolios at the National Maker Faire, which is a fairly common thing for me to do, except that it was following Nick Cannon on stage, which is definitely not. Nick was there representing RadioShack, and he was kind enough to post for a quick picture and to give a shoutout to his alma mater Monte Vista High, which is also where Natanya went. 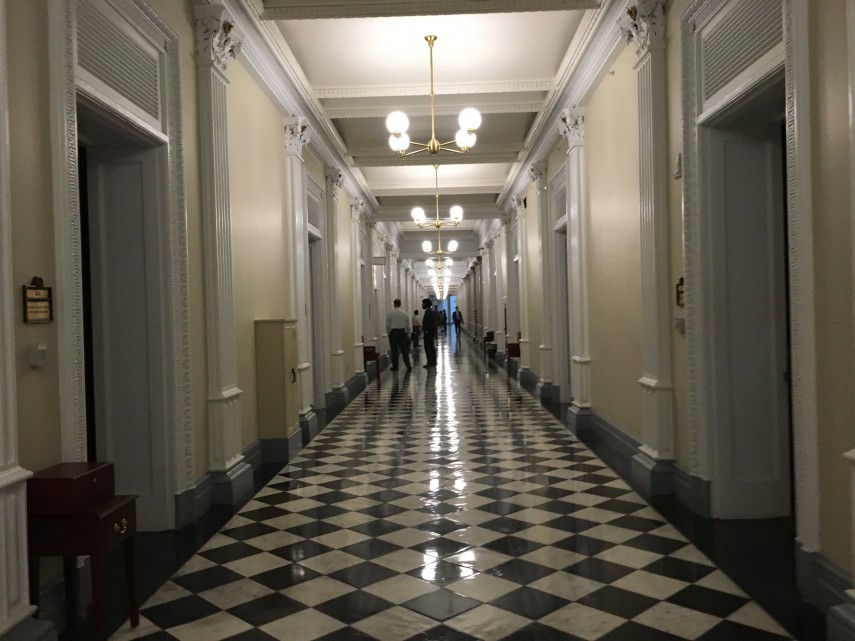 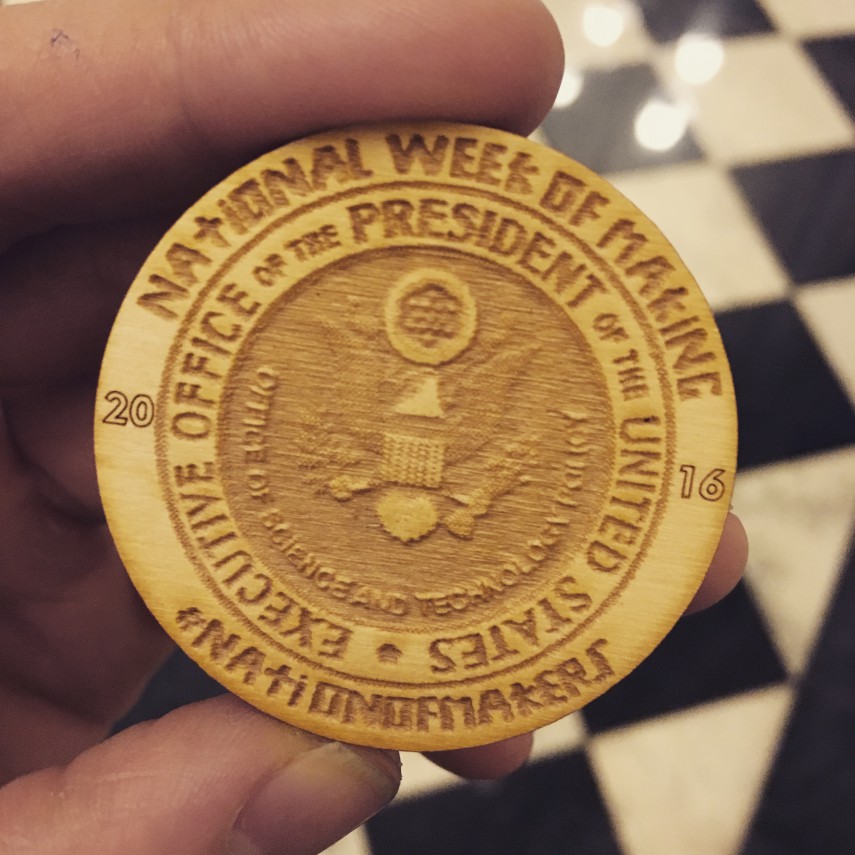 OSTP-issued challenge coins for the Week of Making 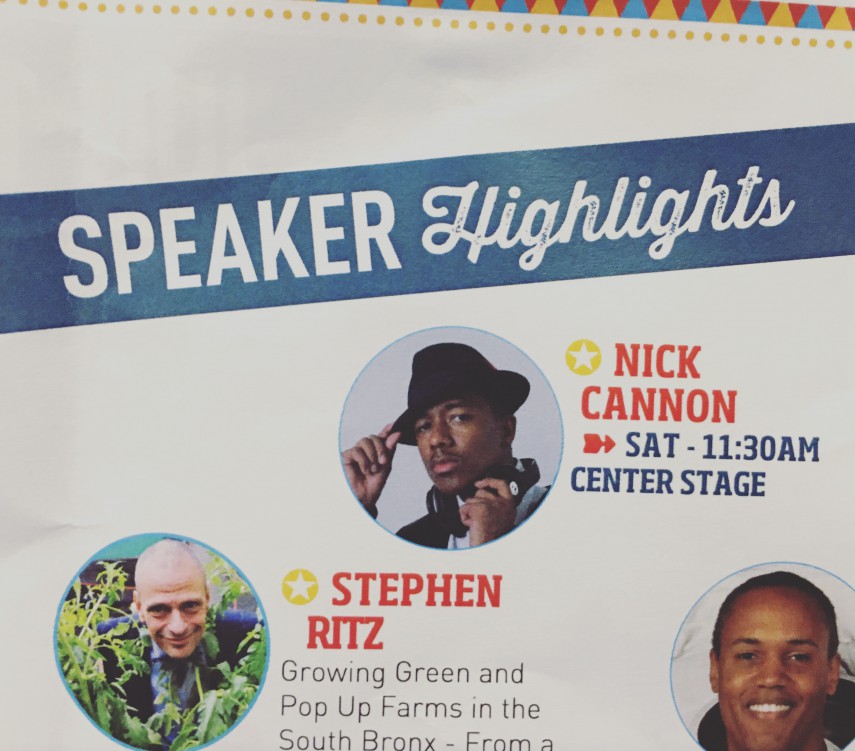 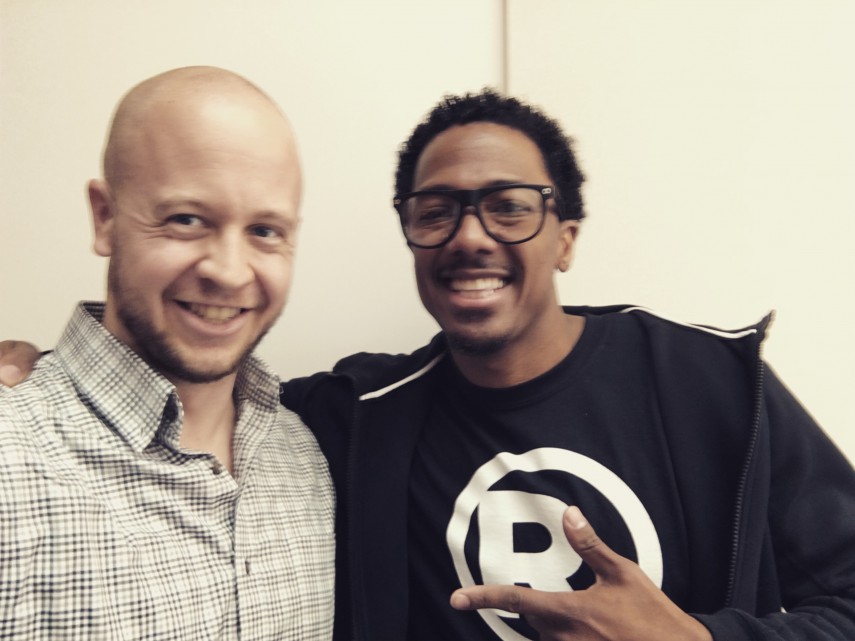 Both with extensive Nickelodeon experience, just on different sides of the glass

Week of THE IMMEDIATE NOW

I’m blogging from nerd camp in Vermont. I’ve been coming here as a camper or staff almost every year since 1998. It’s where I come to recenter and recharge myself at some baseline moral/spiritual/personal level (I know, very Vermont). It was at nerd camp that I first ‘found my people,’ and, between teaching here and working at MIT, I’ve basically never left.

This year I’m not teaching much. Most of my former students are now staff and have improved my old courses or introduced their own. Instead, I’m helping the camp directors run a ‘leadership’ unit for the older campers who seek to become staff one day. My focus has been to help these campers, who are mostly upperclassmen in high school, try to understand who they are in the world, who they want to become, and how to get from the former to the latter; additionally, to try to understand who leaders are and what leaders do, inclusive of but extending beyond the dimension of moral philosophy and into some kind of reflective and integrative practice of trying to help people around you do stuff that ideally makes the world a better place.

Most of this unit is based on activities and discussion, but as someone with two critical theory degrees, I can never get too far away from the text, so I have assigned a few optional supplemental readings to help frame and inform our discussions, which I’ll link here as kind of a record and primer on how I think about all this stuff: 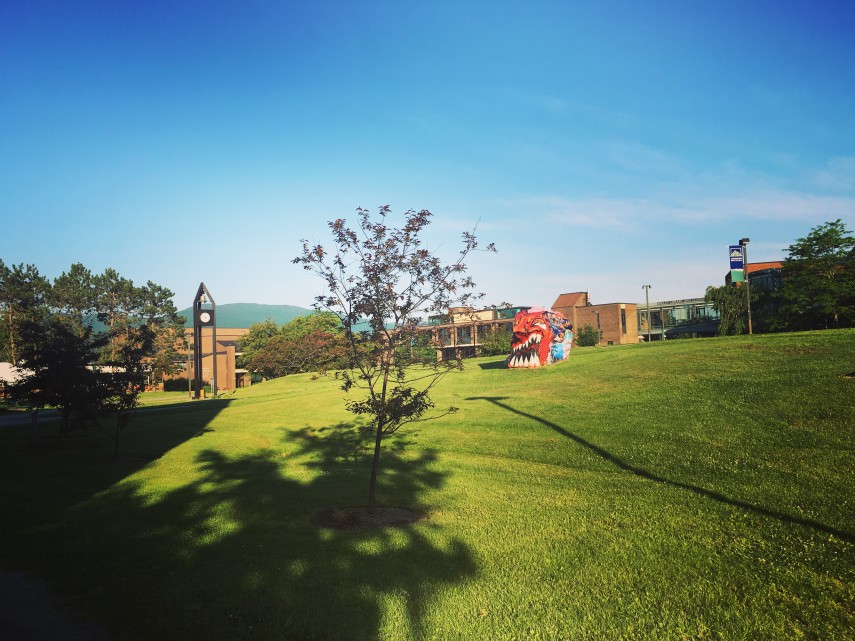 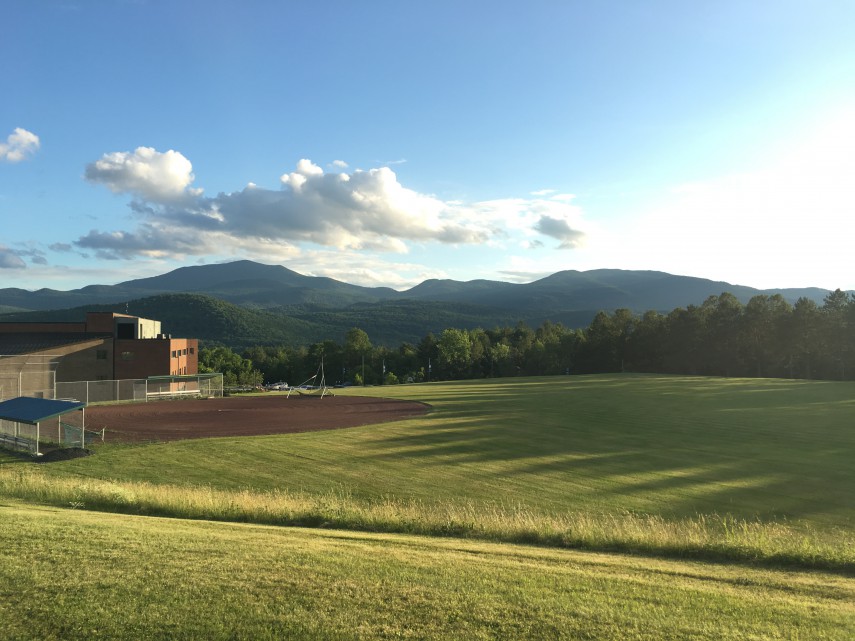 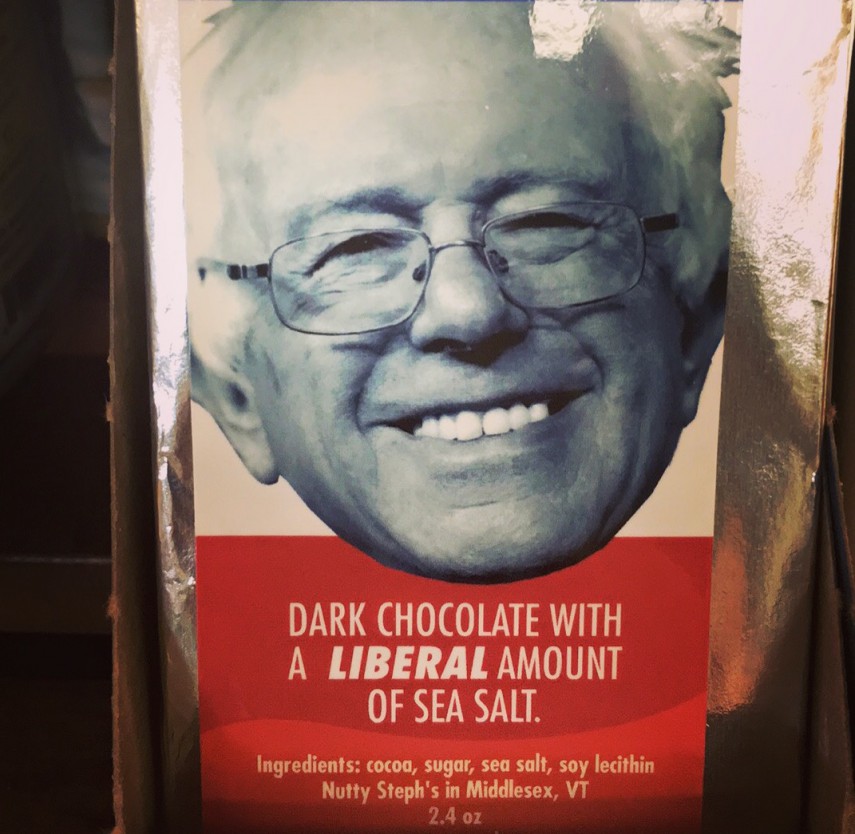 Week of THE EXTREMELY NEAR FUTURE

I’ll be here at nerd camp for the rest of the week. After that, I’ll be back in Cambridge for two days, just long enough to post the ~*~new blogger application~*~, so keep an eye out for that. Then, I’m flying out to the Bay Area again for a family vacation. I’ll be back the second week of July for most of the rest of the summer, which should be just long enough for me to recover from summer in time for the next admissions cycle :)